Well, technically it’s the Drake and Future Show, titled the Summer Sixteen Tour. But the energy Drake gave to the crowd revealed he can never be drained nor stopped. The two rappers hit up the 303 on Saturday night, October 1, 2016 (don’t worry; they play again tonight) at the Pepsi Center. Openers Roy Woods, DVSN and DJ T-Jizzle got the crowd revved before the stars of the night. Too much beer had already begun to flow, people had already gotten kicked out and contoured and corseted girls paced anxiously back and forth; when would Drake come out?

Around 10 p.m., the Toronto rapper made his fire-works blasting appearance with the song “Summer Sixteen.” Jumping all around the stage, exhibiting his signature dance moves, spitting his memorable lyrics, it made sense why this man can hold so much swagger and confidence; the people just love him.

“I’ve been waiting on this show for real; Imma let you know we’re coming to an end and we got a bet going on backstage on who is gonna be the craziest crowd with craziest people. I’m gonna let you know my money wasn’t on Toronto or New York City or even L.A. My money is right here in this motherfucker.” 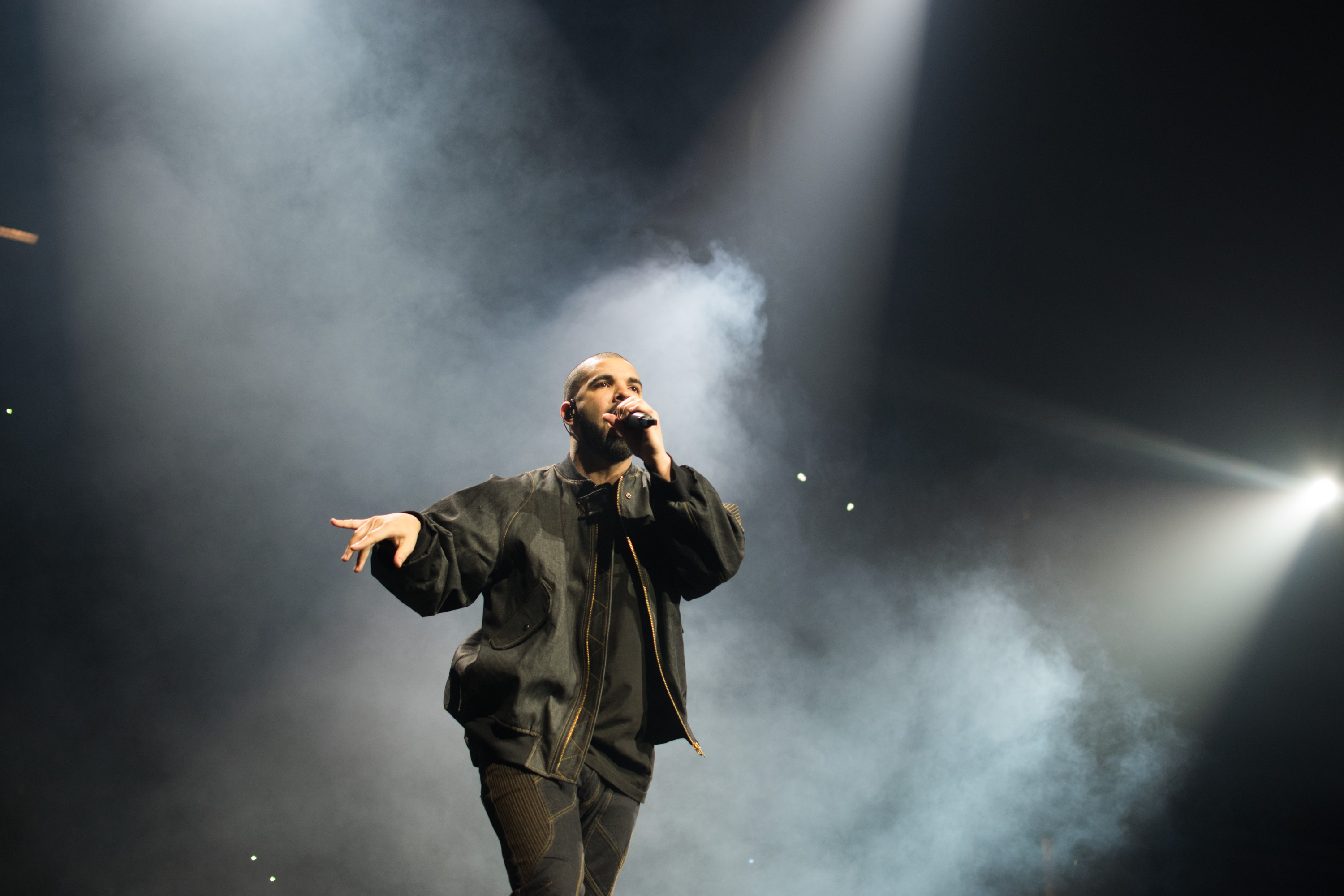 And this, of course, got the crowd going wild. Throughout the night, he made sure to converse with the crowd and spotlighted different fans, thus creating an energetic dynamic between the rapper and his crowd; they wanted to be seen and he wanted to give back the love. This is only one of the certified Drake moments I noticed at the show. His ability to connect with his fans is what makes him so unique among the sea of great hip-hop and rap artists. Check out below for more highlights of his Denver performance.

There’s a reason that the iconic “Hotline Bling” video spread like wildfire over the web and is now forever remembered in memes. And it has to do with his nonchalance ins dancing. When the first beats of “Hotline Bling” spilled from the speakers, pink balloon lights swirled throughout the arena, with Drake dancing serenely by himself. Of course, he showed these moves off all night, parading around the large stage and commandeering it with his technique.

Towards the end, “One Dance” came on and he grabbed the air as if Rihanna would come bursting out, able to twerk along with him. Sadly, the goddess did not appear and he said he needed a girl for this one. You can only imagine the girly screaming that then took place. 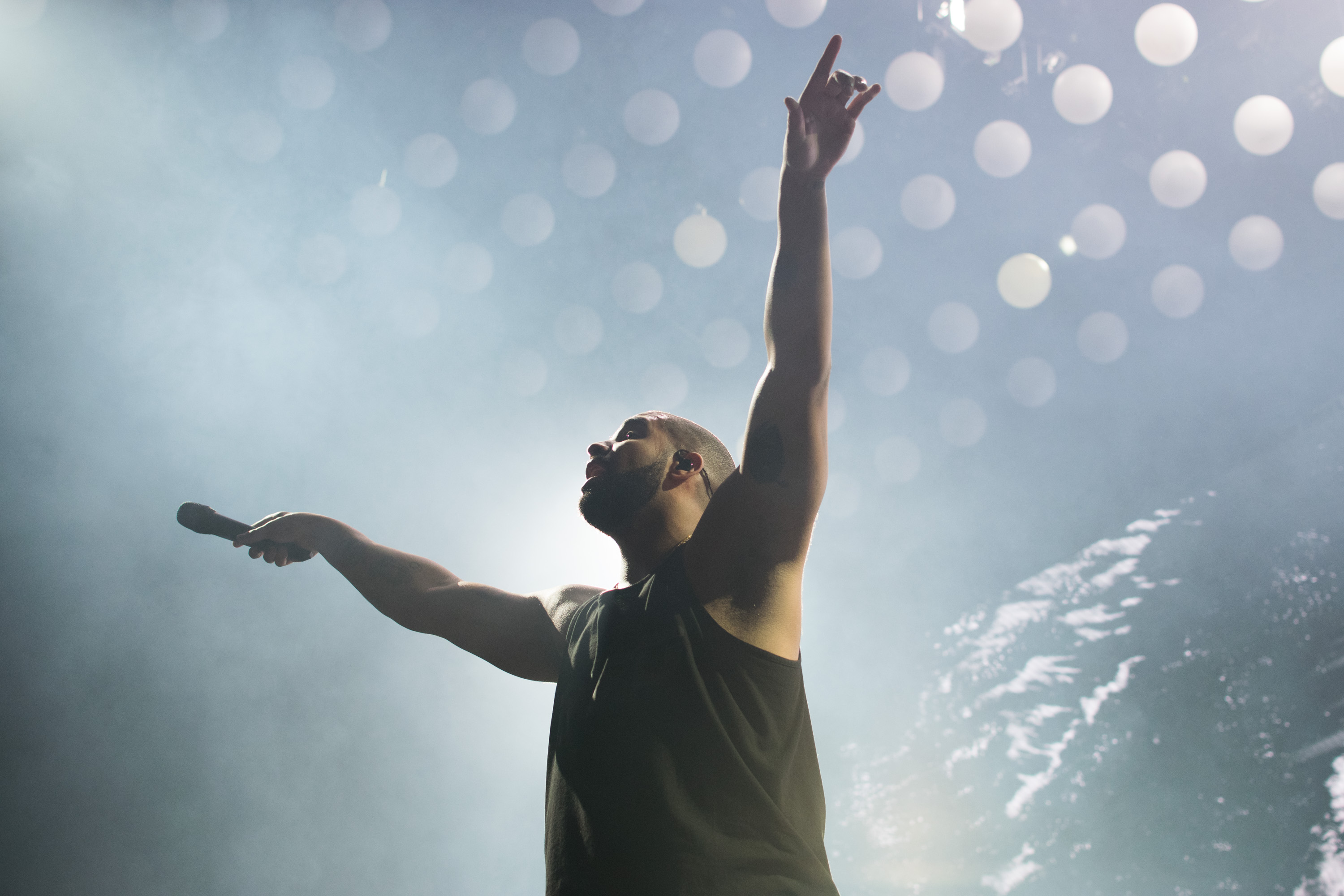 This tour was generated to promote his new album Views, but Drake knew the crowd would desire more from his discography. In Drake fashion, he told us “we deserved the greatest show,” and proceeded to give us cut-up tracks from Thank Me Later, Take Care, If You’re Reading This Then You’re Too Late and more. Before the show, I wondered if some of my favorites would be played, or merely skipped over due to length of time. It was a cool idea to spit out the iconic verses everyone knew, then jump to the next, rather than devoting a whole four-five minutes of the set to an older, albeit loved, song. Some notable oldies but goodies were “HYFR,” “Up All Night” and “Headlines.”

From pink glowing balloons to explosions of fireworks, this man showed us what’s up in the world of stage technology. At one point, he stated it was his responsibility as a man to see the crowd and he hopped into a cage to float around the Pepsi Center. Singing “Hold On, We’re Going Home,” he literally had his eyes on us as he glided throughout the arena.

While he dressed simply, his world was lit up around him; his screens featured graphics of oceans and abstract lights and he pranced from one lifted box to another as if he wanted to tower over the crowd. 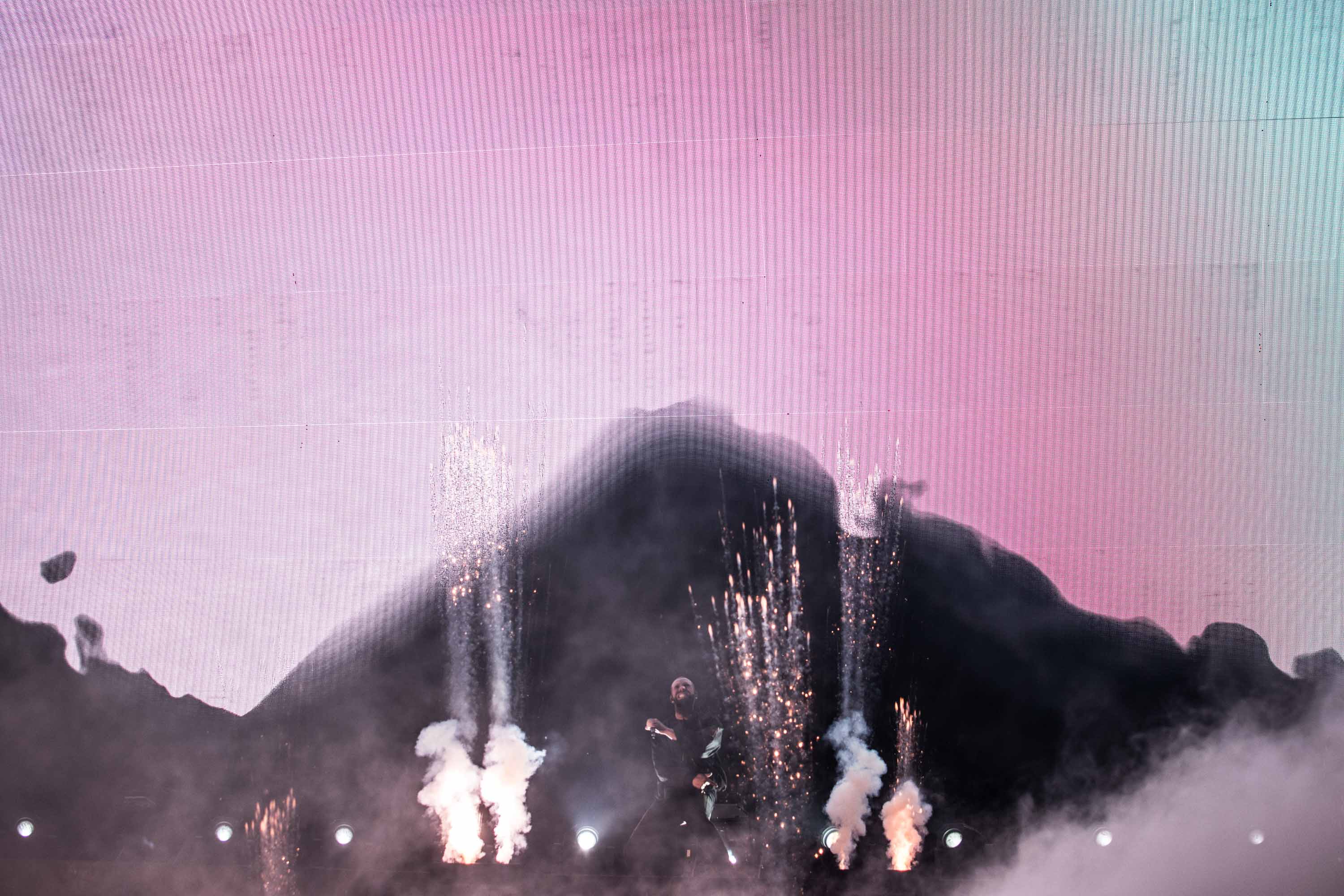 Future came rising up through a hole in the stage and Drake bestowed the stage unto him. While both rappers share the music genre, Future’s set was starkly different than Drake’s. His graphics touted film clips of drugs, nude women, expensive yachts and a teensy bit controversial police imagery. But that’s his crowd, those that party until 5:00 a.m. and wake up in strange Bugattis. He spit lines from songs such as “I Thought It Was a Drought,” “Bugatti,” “Lowlife” and “Fuck Up Some Commas.” It was a party on stage as he danced around with some hype men. He added fire, literally and figuratively, to the crowd’s energy. 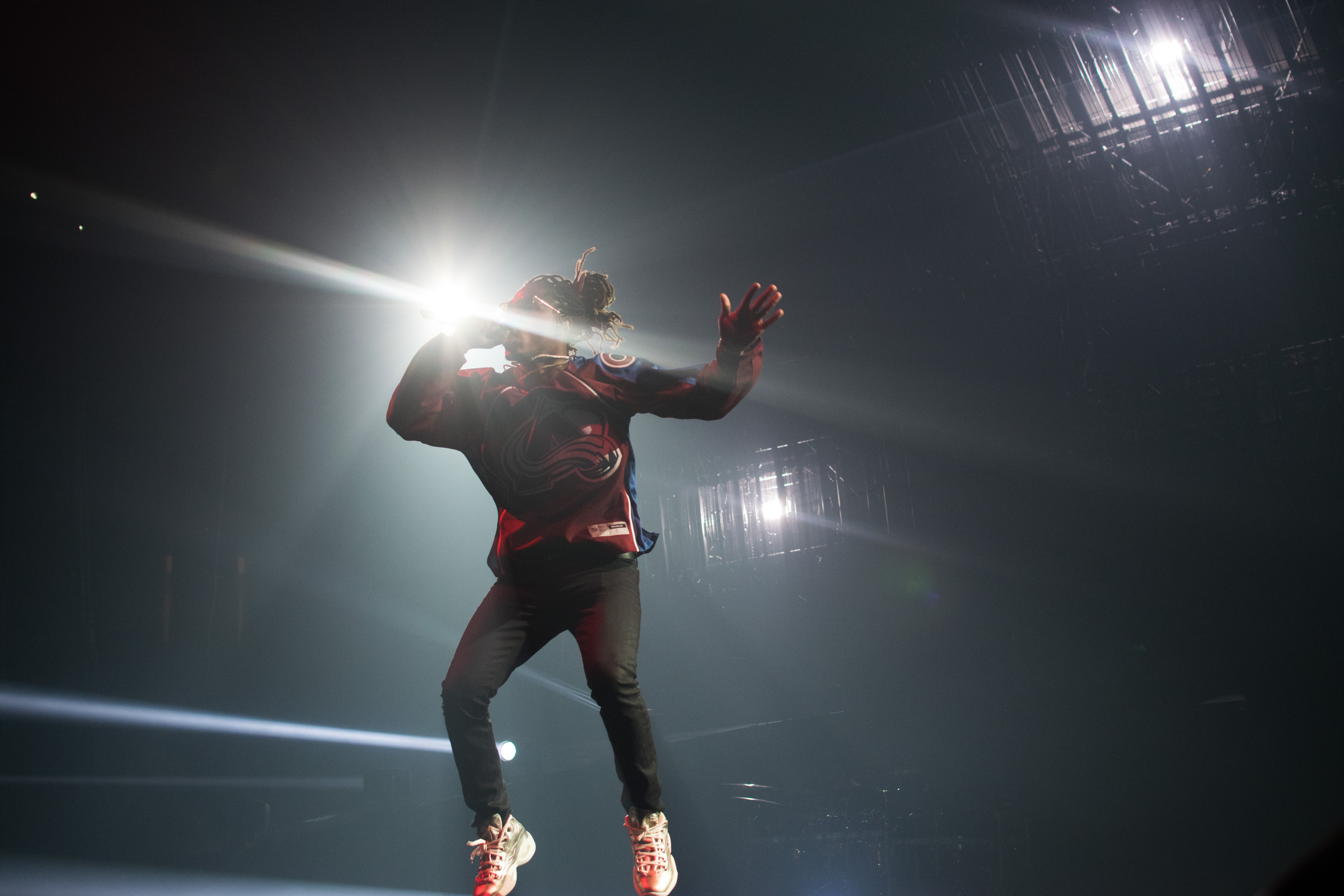 Future’s set leads me into the next show stoping Drake moment: his pyrotechnics. Balls of fire shot up from the stage to punctuate different verses of infamous songs. An example was when “Know Yourself” came barreling through, and the line “I was running through the six with my woes” caused an explosion of light and fire, taking the crowd deeper into their cultivated energy.

Drake has a lot of money. And he isn’t shy to talk about it. If you’re a fan, you get this, as a lot of his verses exude confidence and bragging rights. “We are forty-one minutes over curfew, probably cost a thousand to five thousand every minute, but Imma keep it rolling for you,” he exclaimed to the crowd, and then the haunting tune of “Pop Style” drifted in. Coincidence? Maybe. Enjoyed? Definitely. A soulful crooner, he owned the stage and his presence. 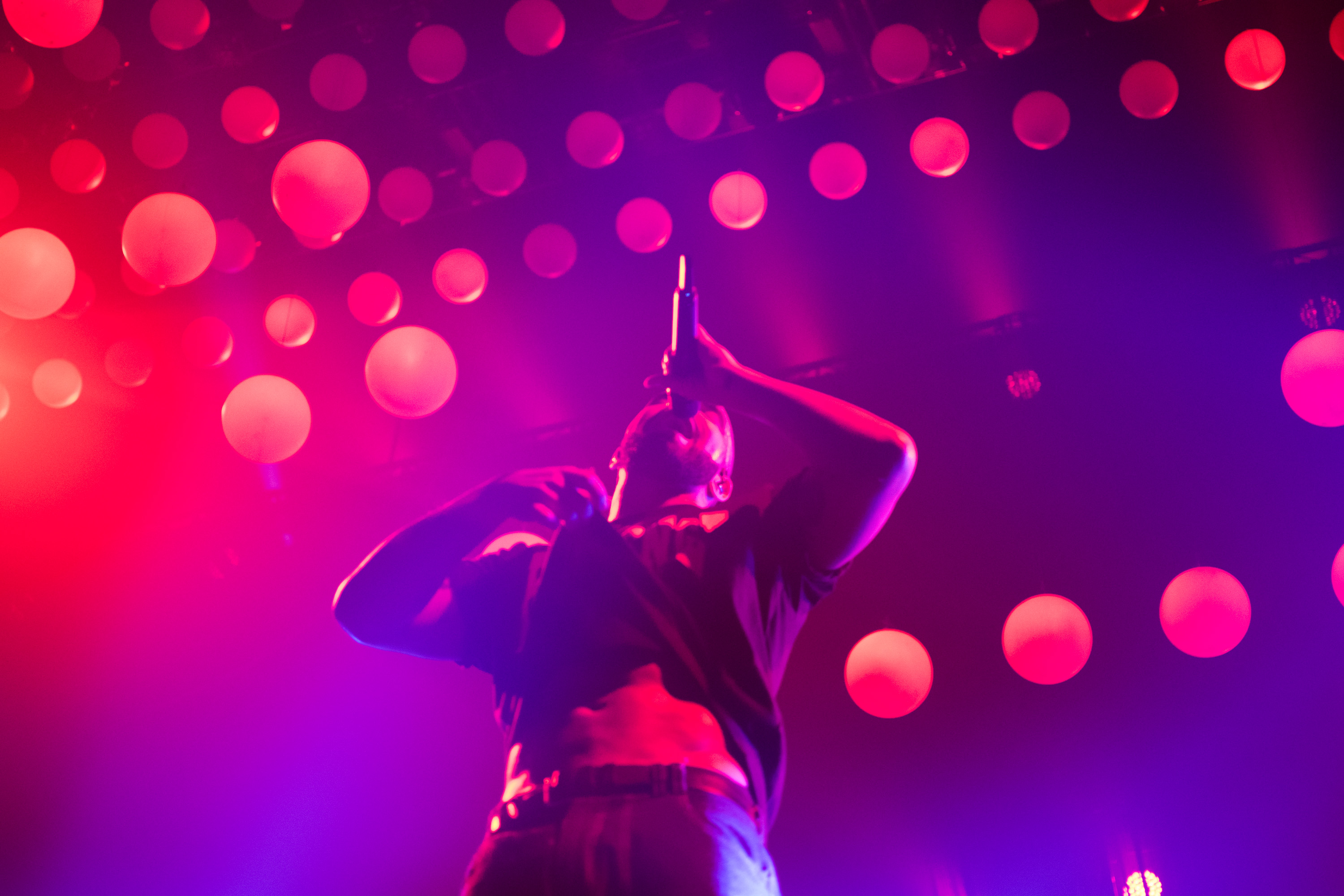 This is very different from the first moment listed (dancing); seduction is his attitude and the energy he spills to the crowd. More often than not, he addressed the Denver women shaking it in the crowd, even giving them their own dedication through the song “With You.” He also played “Faith” (On my way from the studio so get undressed / Let’s do the things that we say on text / I want to get straight to the climax), “Work” by Rihanna and “Too Good” to inspire his rights to seduction.

Even though this show was near the culmination of his tour and he’s had many times to recite his lines, Drake didn’t falter once in front of the large crowd. It was as if the stage was his second home, and Denver was an old friend to catch up with. Songs like “Blessings,” “Energy” and “Jumpman” touted his rapping abilities and kept the crowd entertained. 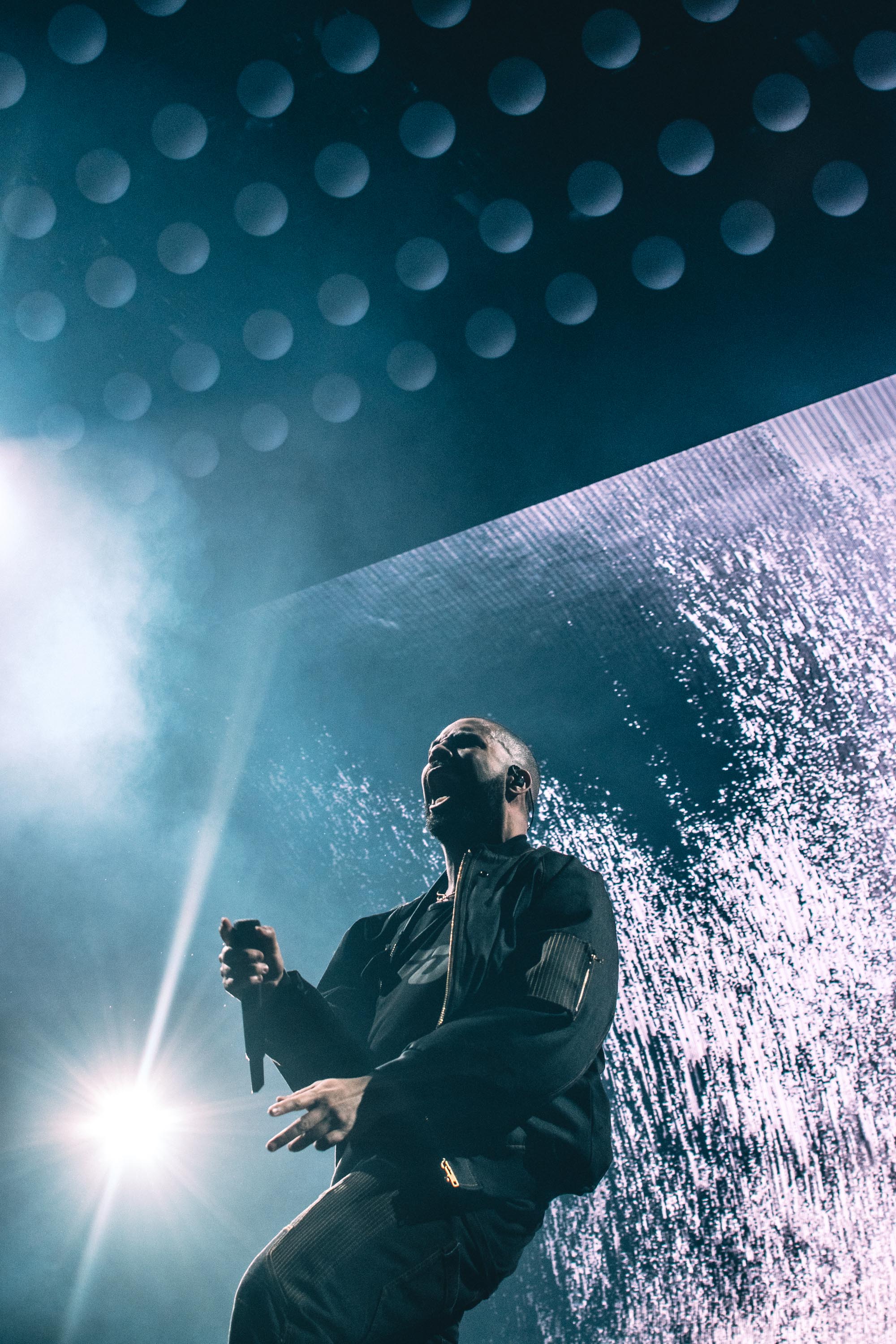 Drake is sometimes known for sappy, lovey-dovey ballads, and his key player would melt these moments into a melody of ivories on stage. But Drake knew the crowd wanted dirty beats, and threw out some jokes between him and his musicians. “How much keys you gonna play, stop… you’re turning shit into Justin Bieber acoustic shit, this is the Drake show. Let’s give them that,” and he would then stampede into the next heart-pounding, ass-shaking song.

Kicking off with “Started from the Bottom” and ending with “Legend,” Drake masterfully strode us through his discography, all the while interacting with fans and spotlighting those in the crowd. It was clear this was a night no Drake fan or music lover would forget. Whether he shared the sentiments with every crowd and stop he’s been on or not, he was clearly grateful for the love thrown back to him in the 303.

Check out the gallery of night one with photos by Sina Ghozati and night two by Glenn Ross.