A night filled with the musical stylings of Death Angel, Anthrax and Slayer might be a bit dark and heavy for the average, colorful soul. For the few thousand people at The Fillmore on Monday night, or this guy dancing in one of the most disastrous storms of the decade, it feels right at home.

In a sea of dark, rugged shirts proclaiming loyalty to bands like Suicidal Tendencies, Hatebreed, Iron Maiden, Motorhead and of course, Slayer, were the many fans of death metal that reside in the Mile High. The Fillmore Auditorium was nearly bursting at the seams to house the multiple mosh pits and headbangs. With Angel Death and Anthrax opening the evening to a rowdy crowd, the show was destined to be one for the books. 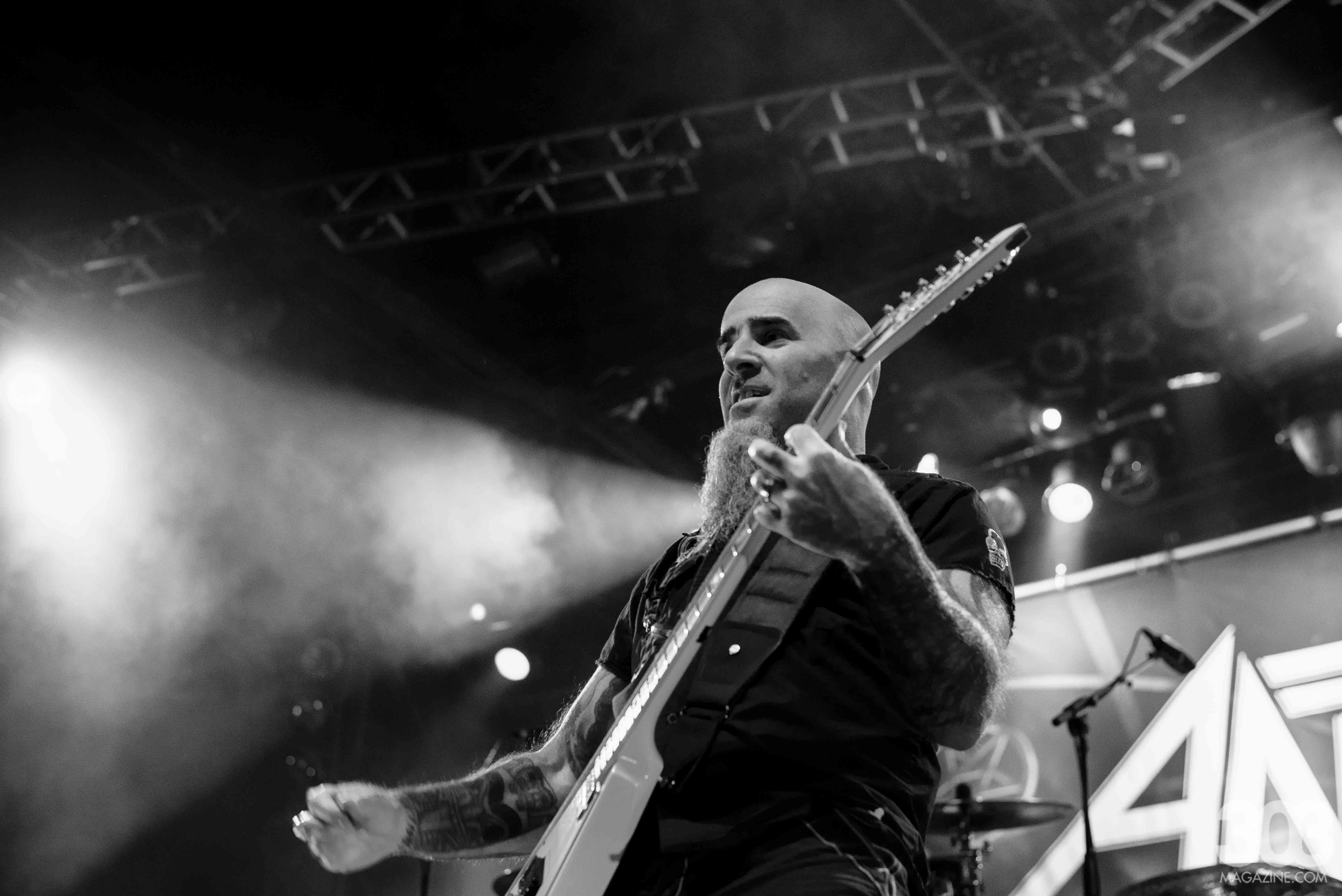 Before the main event, a white sheet was draped dramatically over the stage, amping the anxiety building to catch what might be seen behind it once the music starts. Through the entire set-break between Anthrax and Slayer there was continuous chanting of the latter’s name and sightings of multiple female fans exposed. One thing was for sure; the party was on. The AC/DC spewing over the house speaker dimmed out as “Delusions of Saviour“ from Slayer’s latest album Repentless turned up. Several large red crosses appeared over a black background on the white sheet, spinning clockwise until they all resolved in the upside-down position.

The band began their set with another new track, also titled “Repentless,” and for a newer song, the heads definitely knew every appropriate moment at which to bang. The set-list did not stick to the fresh material though, with the next track “Chemical Warfare” being off of their 1983 debut album Show No Mercy.

To say the decor was elaborate would be an understatement, as the entire back side of the stage was covered in the detailed design that can be found on the Repentless album cover. The backdrop somehow did end up changing throughout the night, mystically morphing into a scene that resembled a graveyard and eventually altered to the classic Slayer logo. “Hate Worldwide,” “When the Stillness Comes” and “Mandatory Suicide” topped the first half of the set-list in pure, animalistic rage among the pack of moshers, causing the aforementioned dark sea to become a flesh sea with the removal of nearly every ’80s vintage tee in the building.

“Thanks for coming out; you guys ready to have some real fun?” – Tom Araya

As the $15 drinks flew out of the hands of those trying to mosh and body surfers were abandoned at the head of the stage to security, it was hard not to notice the raw dedication that this group of people have to the lifestyle. Tattoos of band logos and album covers engulfed the flesh of the majority of the fans, from colorful calves to fisted hands and knuckles in the air. Each and every satanic lyric was screamed along with lead singer Tom Araya, a God among men on this night. It was entrancing.

“It’s all about the love of the music; if you keep coming to listen we will keep coming to play it. Is it weird to hear the word love in here?” – Tom Araya

Metal hands raved through the air to the tune of Araya proclaiming himself as the Antichrist in the track, you guessed it, ‘The Antichrist.” “Seasons of the Abyss” and an elongated “Hell Awaits” brought the set to a close, but no one was fooled by the band’s departure. Not more than a minute went by before Araya, Kerry King, Gary Holt and Paul Bostaph joined to stab the crowd with lengthy solos, graceful hair whips and other air guitaring material for later use. “South of Heaven” was the debut lick of the encore, but “Raining Blood” could have been the most well received. The eldest of the set, “Black Magic,” took everyone back to the ’80s again, until finally “Angel of Death,” (which is possibly Slayer’s most confrontational and most influential song) escorted the eventful night to its demise. With a lengthy set-list and sweaty room of fans behind them, Slayer had taken their last breath of life in Denver. Until the next resurrection.

All Photography by Austin Voldseth. See the full gallery here.