On the evening of October 20th, Kaleo returned to Denver as the headline performance for the fifth time in their career. With a packed house at the Ogden theatre, alongside the rock-band came two unforgettable opening acts, which made for the perfect musical combination.

To start off the night, the duo from Austin, TX,  The Wind + The Wave, shared their talents with the crowd.  This group is composed of two main vocalists, a drummer and a bassist.  If someone is a fan of the popular Indie-rock vocalist Regina Spektor, they would most likely appreciate the lead singer, Patricia Lynn’s musical style.  The set was full of a mix between upbeat Indie-folk and Blues-rock tunes that were accompanied by instruments including a keyboard, tambourine, and mandolin.  The stage was well lit allowing the crowd to visually connect with the expressions on band members faces while performing.  The show had the audience toe-tapping and clapping along to several of their feel-good songs and was successful at keeping the full-house engaged while they anticipated Kaleo.

Bishop Briggs took over the stage next, and before I go any further, I want to say her flawless live vocals took me by surprise.  Additionally, Briggs’ head-banging and hopping across the stage while rocking the “Miley Cyrus” double-top knot hairdo made for one riveting performance. She was able to push her voice to the limits without compromising the quality of sound and was one of the strongest live performances I have ever witnessed. The Los Angeles based singer and song-writer has only been on the radar in the states since 2015.  Briggs is originally from Bishopbriggs, Scotland, thus her stage name. At this point in time, the female vocalist has yet to make an EP or full-length album, but has singles that are known worldwide.  When “Wild Horses” a song featured in an Acura commercial was aired, America was using their Shazam app to find out who was behind the vocals.  However, her most popular hit to this day is “River” which snagged her an impressive number one spot on Hype Machine’s Popular Charts. Before touring with Kaleo, Briggs, was opening for Coldplay on the US West Coast leg of the AHFOD Tour, and in my opinion it won’t be long until she has a tour of her own.

After the performances of The Wind + The Wave and Bishop Briggs, the fans were looking forward to the Kaleo set, with high expectations.

Kaleo is a rock-band that has the ability to play a combination of rock, folk and blues.  The foursome originated in Iceland, but moved to the Austin, TX just last year. Three out of the four band members grew up together, and have known each other since grade school. The three original members JJ Julius Son (lead singer), David Antonsson (drummer), and Daniel Kristjansson (bassist) started playing together at age 17, and in 2012, welcomed Rubin Pollock (guitarist) into the group which completed the quartet, Kaleo.  After their single “All the Pretty Girls” was noticed in 2014, the band went on tour in America and played in more than 45 of the 50 states.  Kaleo currently have two full-length albums, Kaleo (2013) and A/B (2016) and are selling out shows on a regular basis. 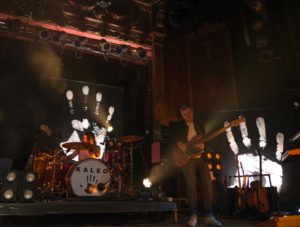 The lights dimmed down, the crowd started to cheer, and silhouettes of the four band members started to appear.  The stage was decorated with canvases that showcased paintings of actual handprints belonging to each member of the band.  Kaleo started the performance with the ballad “I Can’t Go On Without You” from their newest album, A/B. The song was very slow and a bit lengthy, although the audience was not completely engaged yet, they were attentive as they were excited for show to come. Nine of the 13 song set Kaleo performed were from their new album A/B, which is an equal combination of moods and tempos. Shortly into the concert, the band played the bluesy-rock single “Pour Sugar on Me” from their first album titled, Kaleo, which contained several impressive guitar solos from Pollock. Once the soulful song came to a close Julius complimented the crowd thanking everyone for coming out, and the audience got loud. 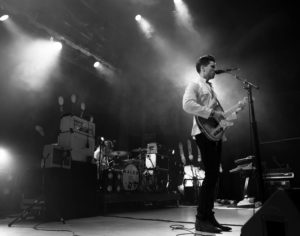 Not only does this band have the ability to play a variety of music, but they also have a way of putting their own style and stamps on each tune. During their single “Automobile”, Julius replaced his vocals by whistling into the microphone, which added a custom feel to the live performance.

Kaleo continued to keep the crowd alive with their claim to fame song, “All the Pretty Girls”, from their new album A/B.  The single, being a bit slower in tempo, showed a different side of the bands capabilities.  The unison swaying of the crowd was like the rhythm of an ocean wave. The stage lights mimicked the subtle background beats and kept the crowd at visual ease.

“Now I know we have some people from Iceland in the crowd, this next song is the only song we sing in our native language, enjoy!” -Julius

“Vor I Vaglaskogi” is Kaleo’s only single that is performed in Iceland’s native language. The song was not understood by most of the audience, but it wasn’t hard to understand the emotions that come out of the Icelandic love song.  It was very obvious that the single is close to the home for Kaleo. 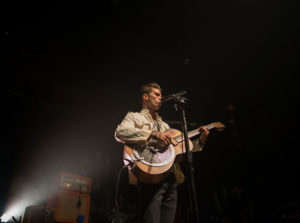 To end the night with a bang, Kaleo gave the crowd what they had all been waiting for, “Way Down We Go”.  With over 35 million plays on Spotify and a No. 1 spot on Billboard’s Alternative Songs list, the attendee’s didn’t hesitate to join in on the performance, singing every last word.

With the combination of The Wave + The Wind, Bishop Briggs and Kaleo, not one fan left unsatisfied that night.