Ghost River – A Space for Art, Fashion, and Community Building

Ghost River is a brand-new boutique located at the innovative Metlo complex at 1111 Broadway. Upon our visit to the shop  at Suite 401, we were expecting to view racks of garments and cases of jewelry. But after entering the space we were pleasantly surprised to learn that this was much more then just another clothing shop in Denver. River Hendricks, the owner and designer at Ghost River, greeted us with great vibes and a warm hug. She was dressed in earth tones with stacks of jewelry on her wrist and fingers, tattoos all around and a huge smile on her face. It was safe to assume that Ghost River was a representation of all her thoughts and dreams. 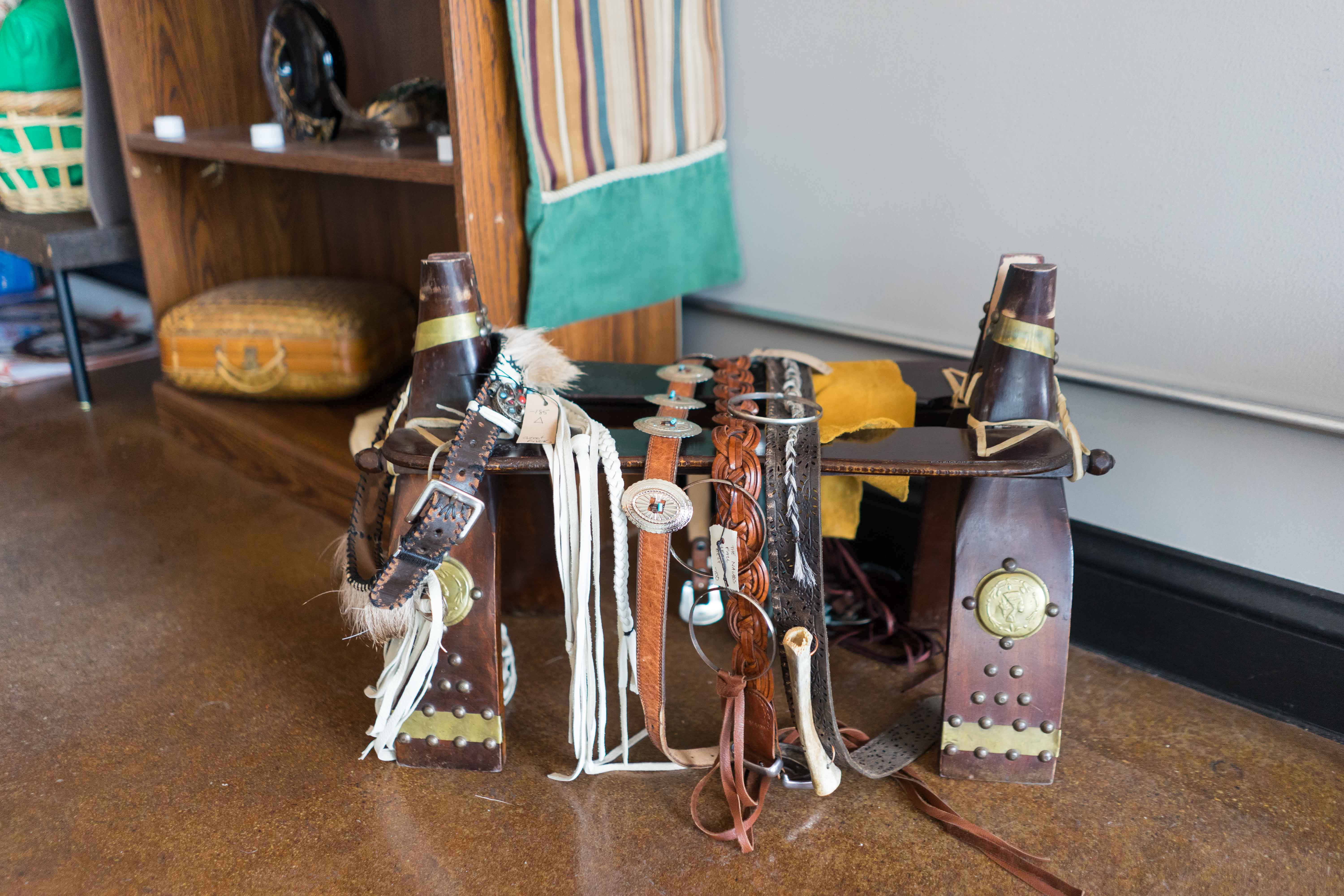 All Images by Meg O’Neill

Before the opening of the physical space Hendricks sold items online. She had earrings, necklaces and art via an eCommerce platform, but wanted much more for her shoppers. “I’ve always wanted a space where people could come in and touch things rather than just seeing them online,” said Hendricks. While she stated that the online world treated her well and has gave her the opportunity to provide products worldwide, there is nothing like having a physical store for a community to center around. And that’s exactly what Hendricks is doing with Ghost River, creating a community rather than just a fashion boutique. With access to the roof at the Metlo complex, Hendricks is able to produce special events as well.

“We have things like sunrise yoga, vedic astrology readings, essential oil classes and so much more,” she said. In fact, this past weekend Hendricks helped host a film showing by Absinthe Films up on the roof, but utilizing the Ghost River space as a VIP lounge.

But this emphasis on community started with Hendrick’s interest in art. After attending the University of Nebraska and not finding it to be a good fit, Hendricks traveled around Australia and Florida, only to find herself in the music business as a DJ before ending up in LA.

“But somewhere in there I found myself losing time for my paintings and drawings due to the amount of time music production takes. Then I moved to Colorado in 2009 and really exploded, finding myself immersed in my art again,” said Hendricks. Ghost River sells and houses many of Hendrick’s paintings now. Mostly inspired by animals around the world her subjects range from images of western rattlesnakes to African-inspired elephants. 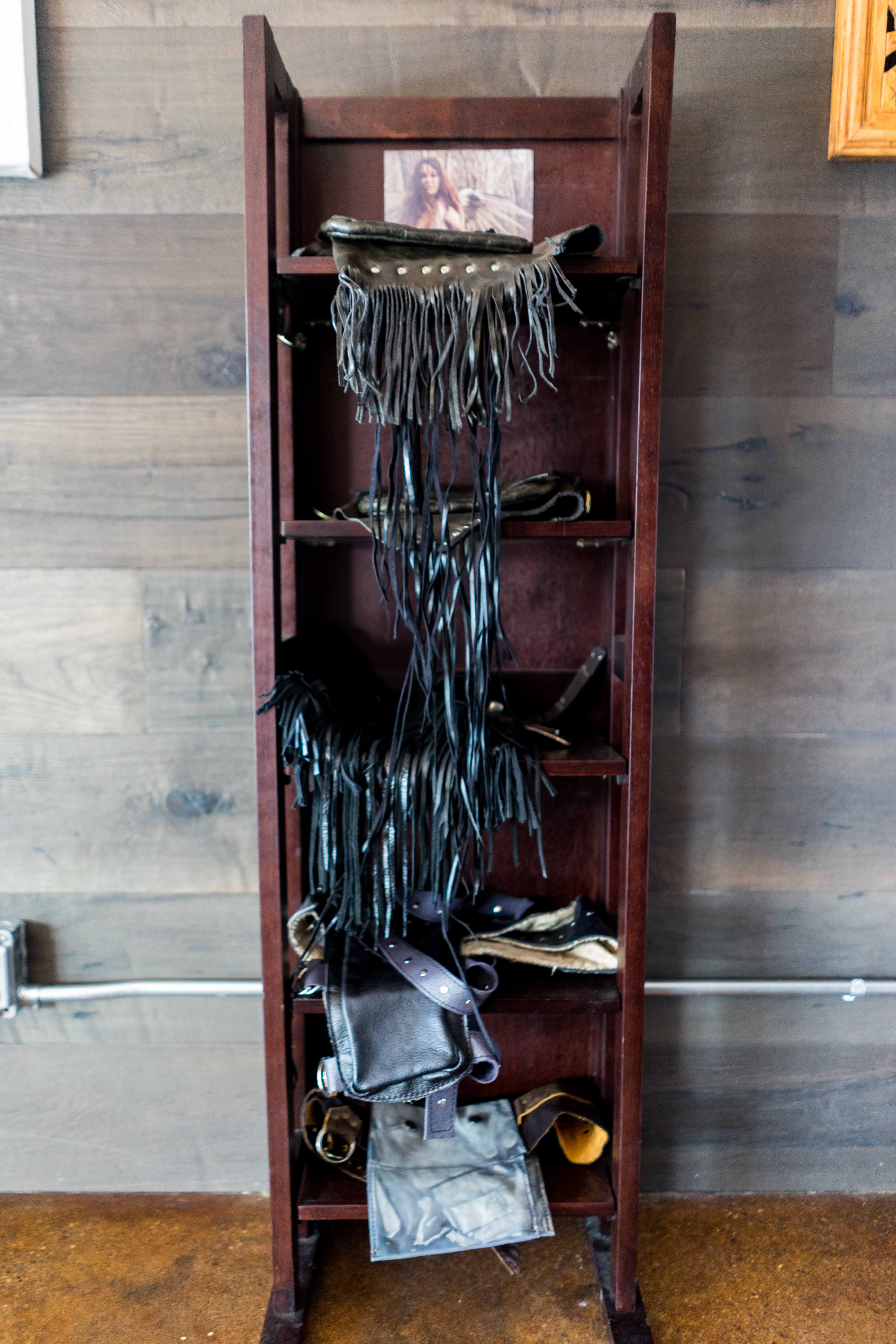 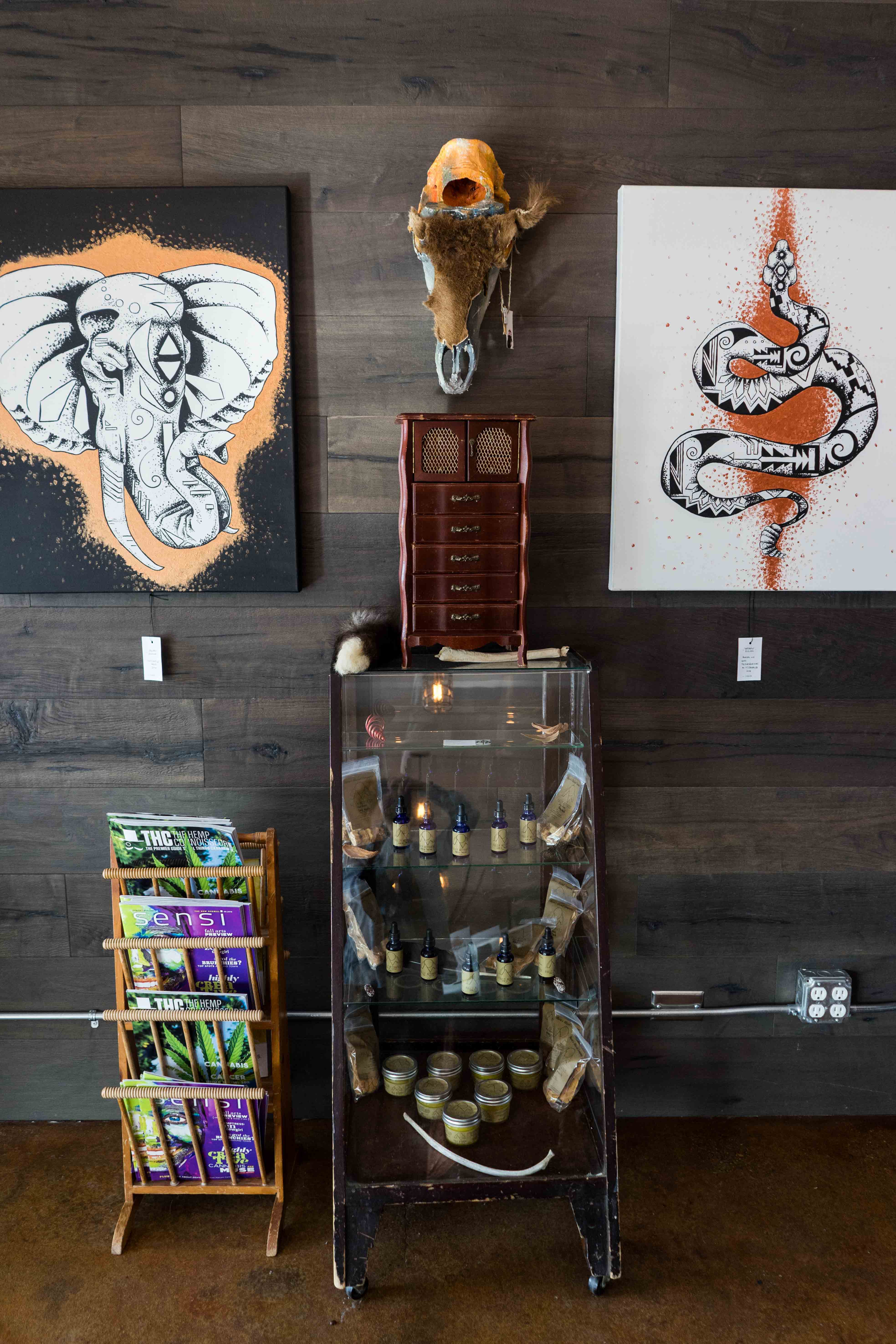 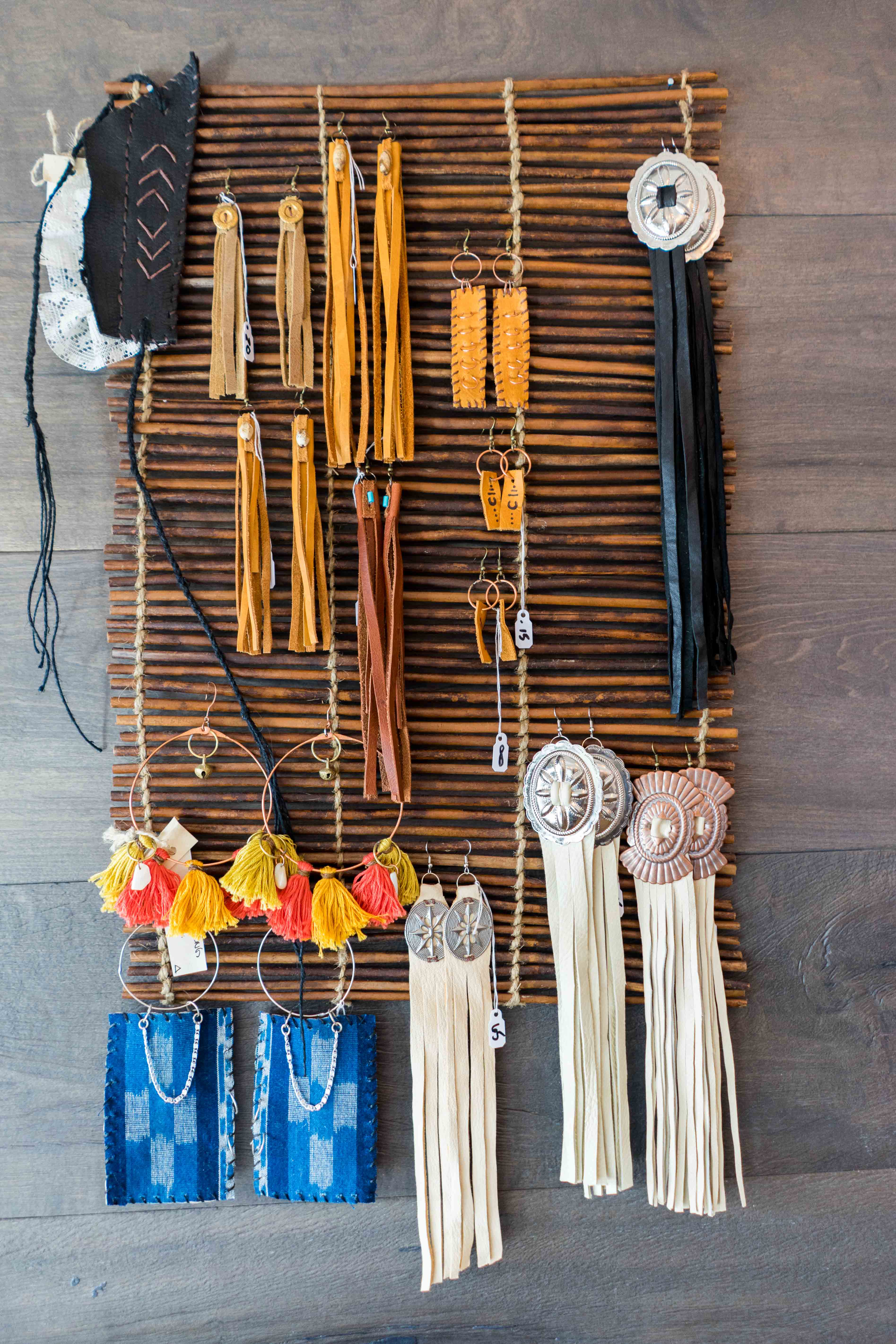 “I collect a whole bunch of things and rarely have a plan for my pieces beforehand. I’ll just pull out what I have and it just comes to me. From there I start cutting and stitching until it’s done.” -Hendricks on her creative process.

But the fashions at Ghost River serve as the main attraction with influences from all around the world. “I’m really influenced by indigenous cultures… which I think is really apparent in my work,” said Hendricks with a big laugh. But she didn’t start creating jewelry until she moved out to Colorado.

“After getting out of the party music scene, I got here and really grounded myself out. I spent time all around Colorado, especially in the mountains, and found things like skulls and feathers which I wanted to use,” she said. With a mentality towards the need to create less waste and use what she had readily available, Hendricks started making earrings, belts and garments out of such materials.

In fact, Hendricks is so dedicated to creating less waste that she sources her leathers from an American furniture factory, utilizing their scraps in her work. But overall, she sources her materials in an organic manner, collecting things she finds on hikes, from trips around the world and in thrift shops. Through this she’ll create a brand new set of earrings with Turkish textiles and leathers or a choker made of old bracelets and chains. But alongside creating jewelry Hendricks has started venturing into garments and is currently working on a men’s line.

“I take fine jackets and add embellishments to them such as some cool deer hide elbow patches and a cool textiles,” she said. She’s found that the line is increasingly popular among professionals looking for pieces that work with a professional aesthetic, but with a flare. Rather than create new pieces and create more waste, every single garment is found and updated. 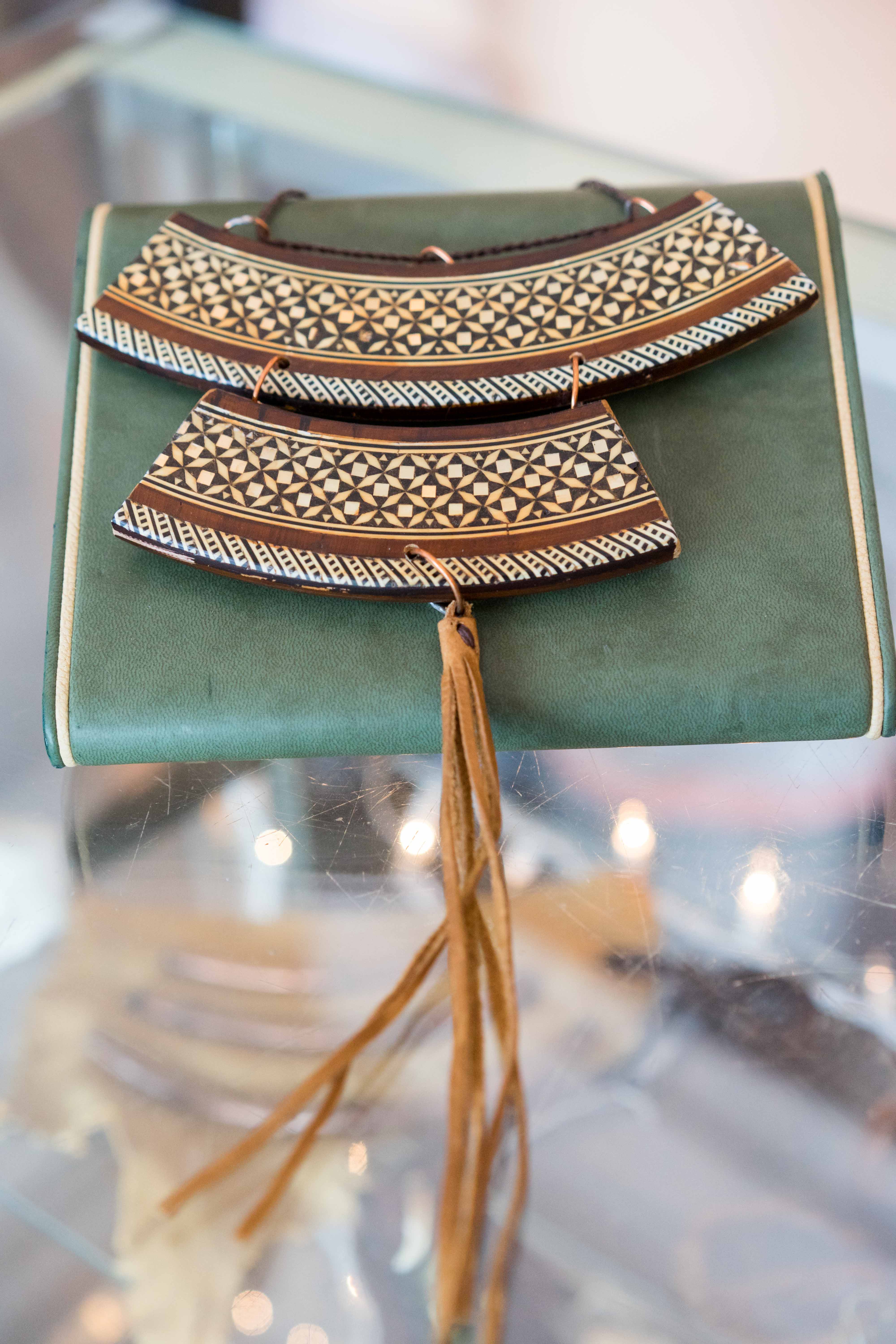 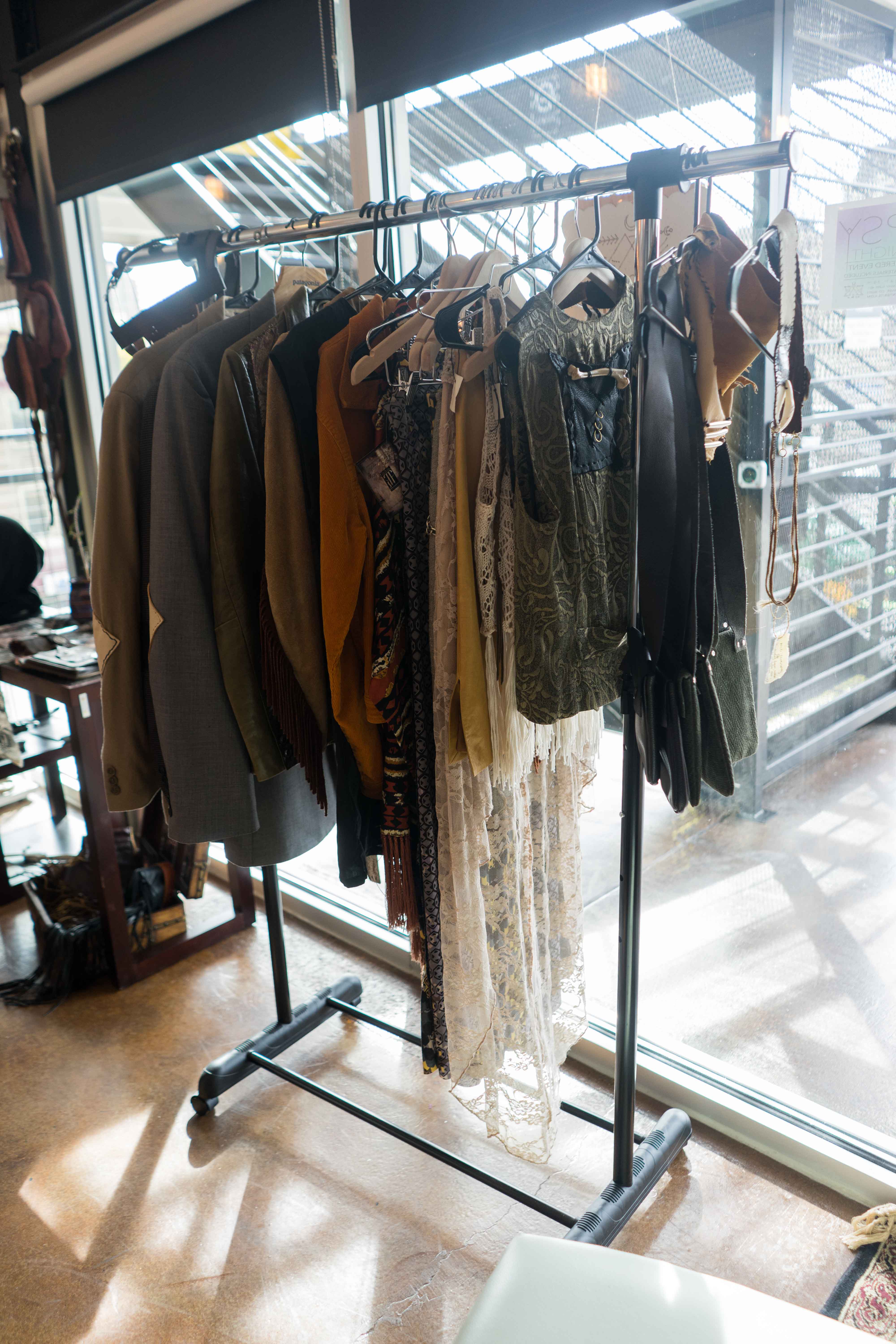 A necklace made from old plates, a rack full of Hendric’s garments, and a necklace of bones and raw hide. 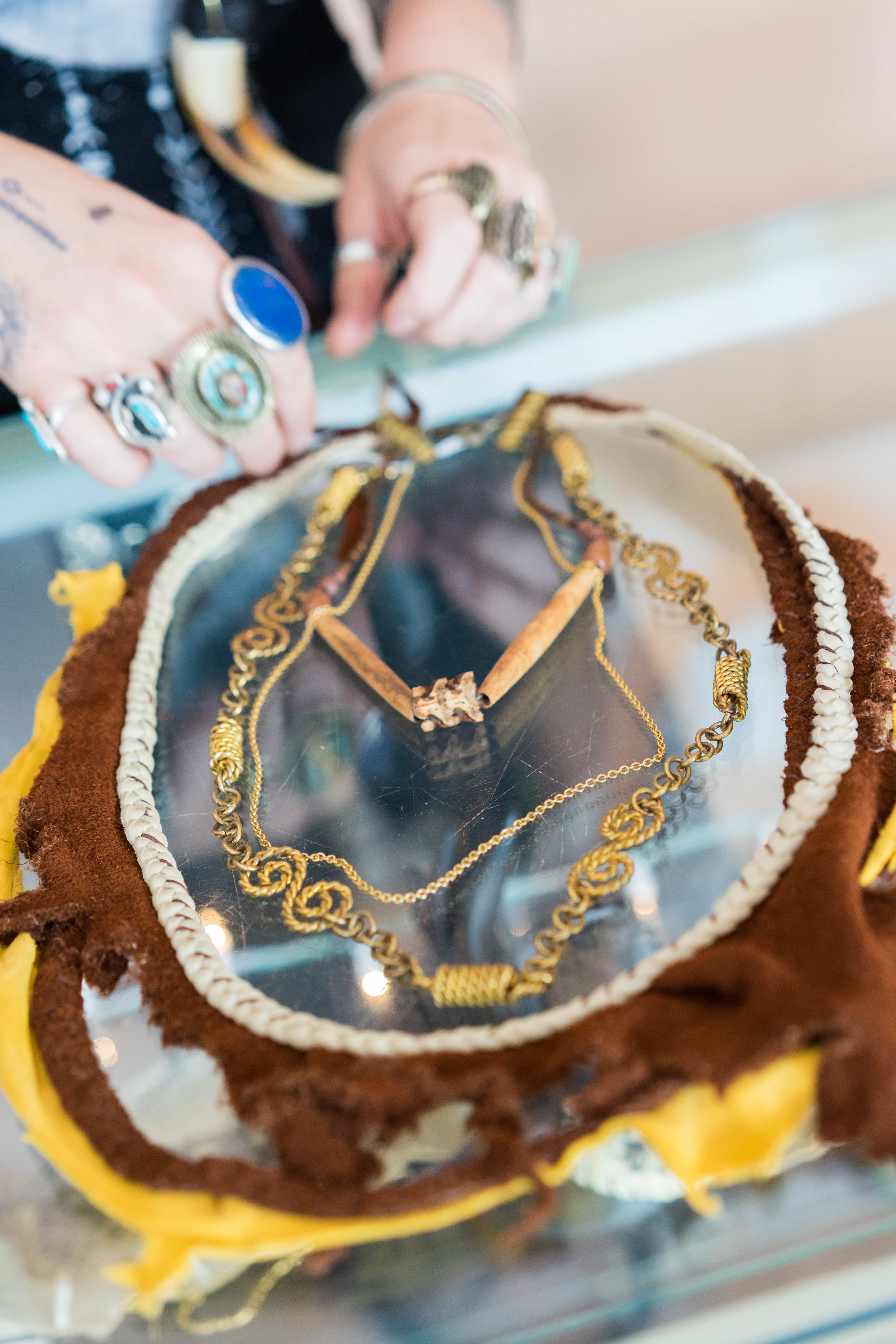 “The reception from the Denver audience has been very emotional,” Hendricks said. “I view this space as sacred, but it seems that others also pick up on that vibe.” Overall, Hendricks has created a space full of positive emotions and expressions, through not only the products she sells, but also through her events which lead to a bigger picture of community building. Her goal of bringing together the Denver audience through art and fashion certainly seems to be working well and will only grow from here. For a list of events and products offered at Ghost River click here. 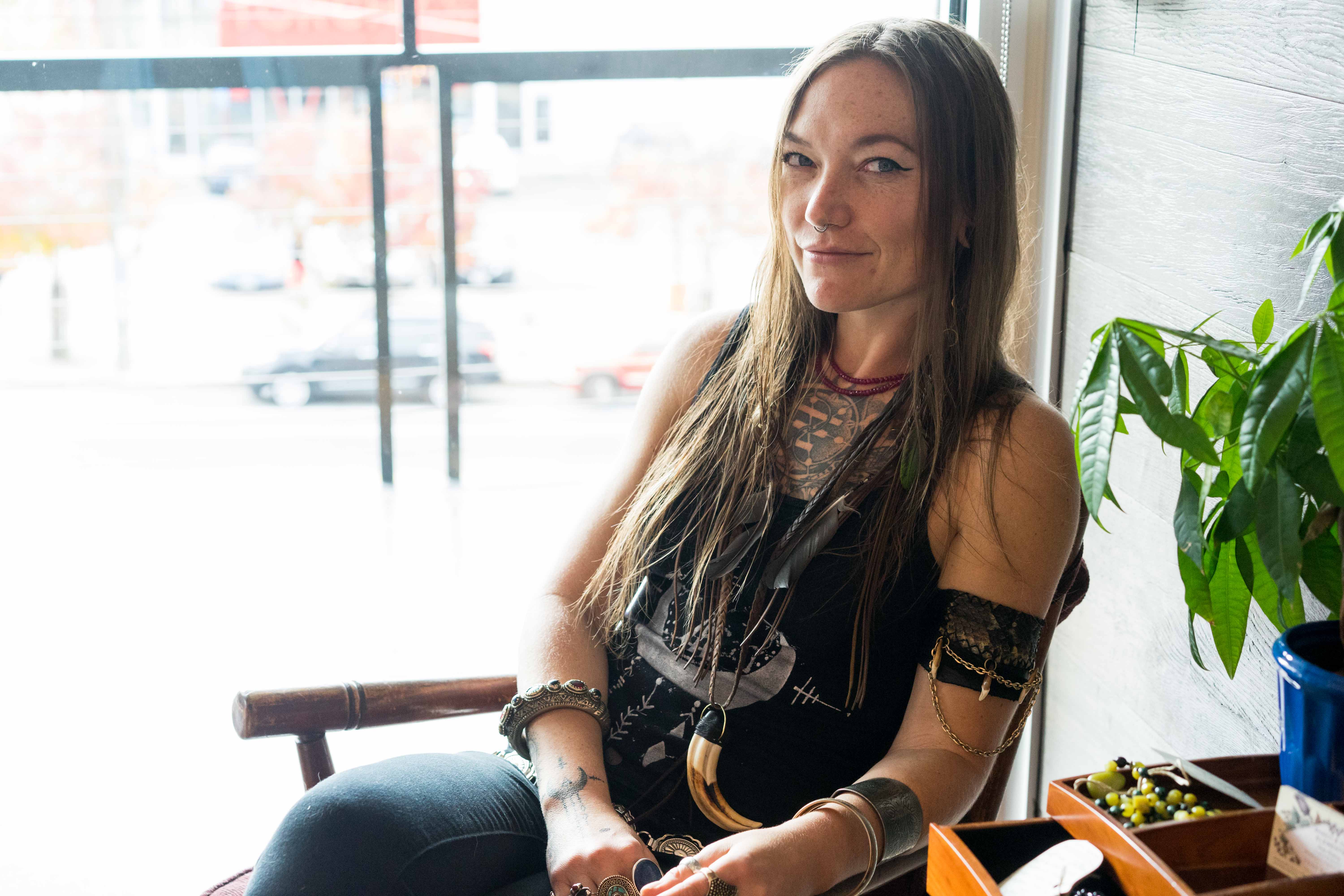 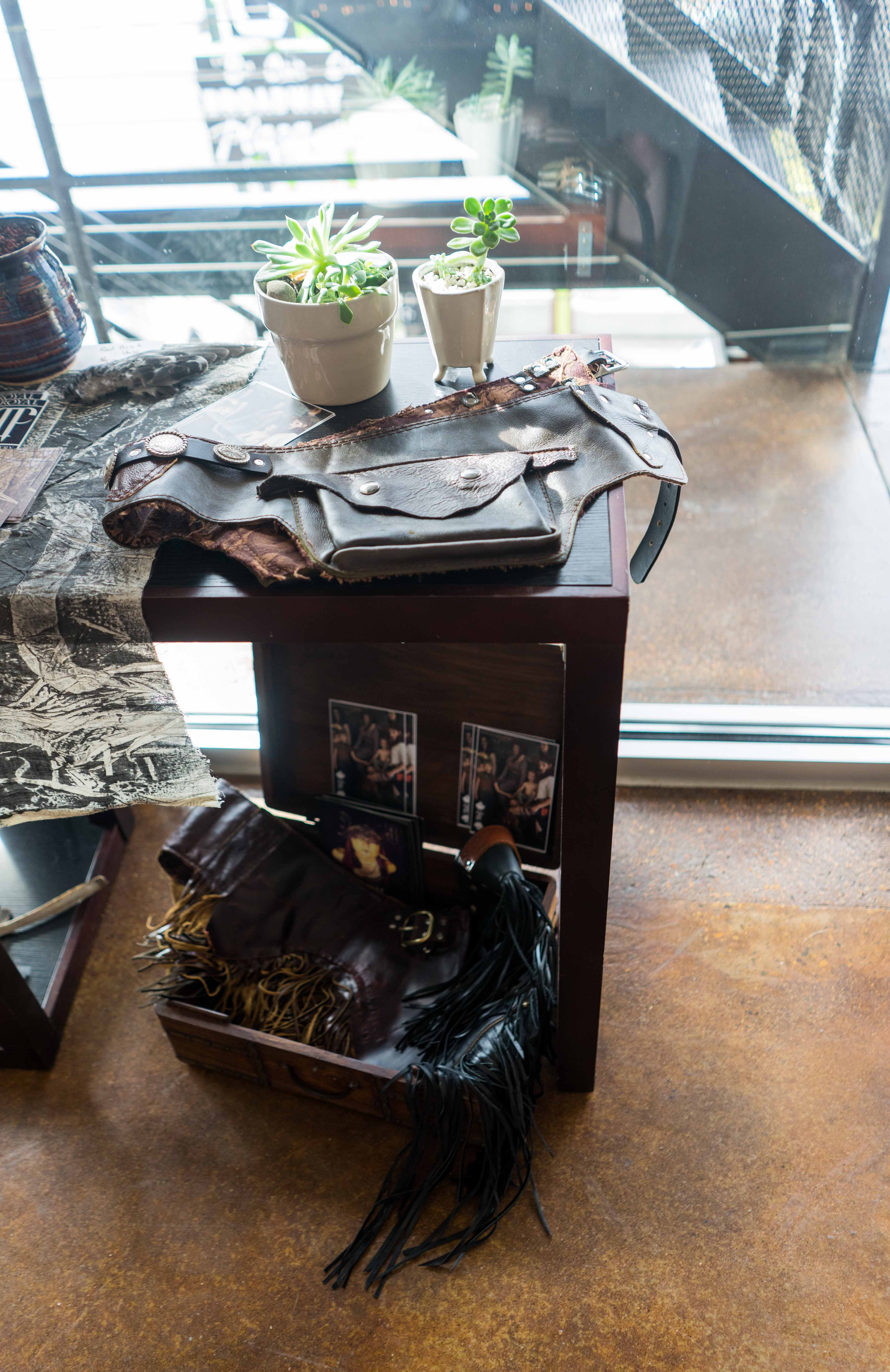 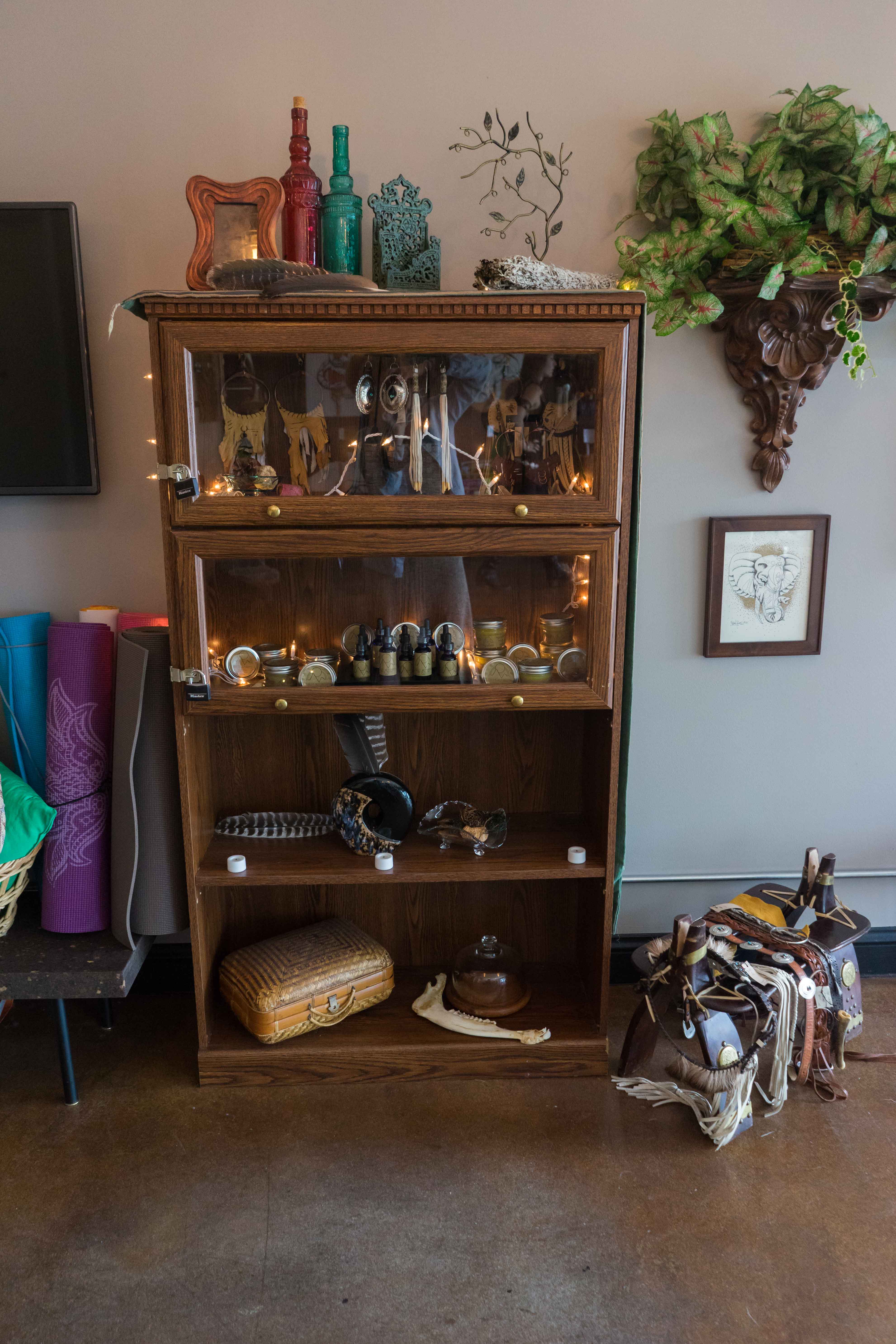 A trunk full of bags, a shelf of CBD products and a case of jewelry. 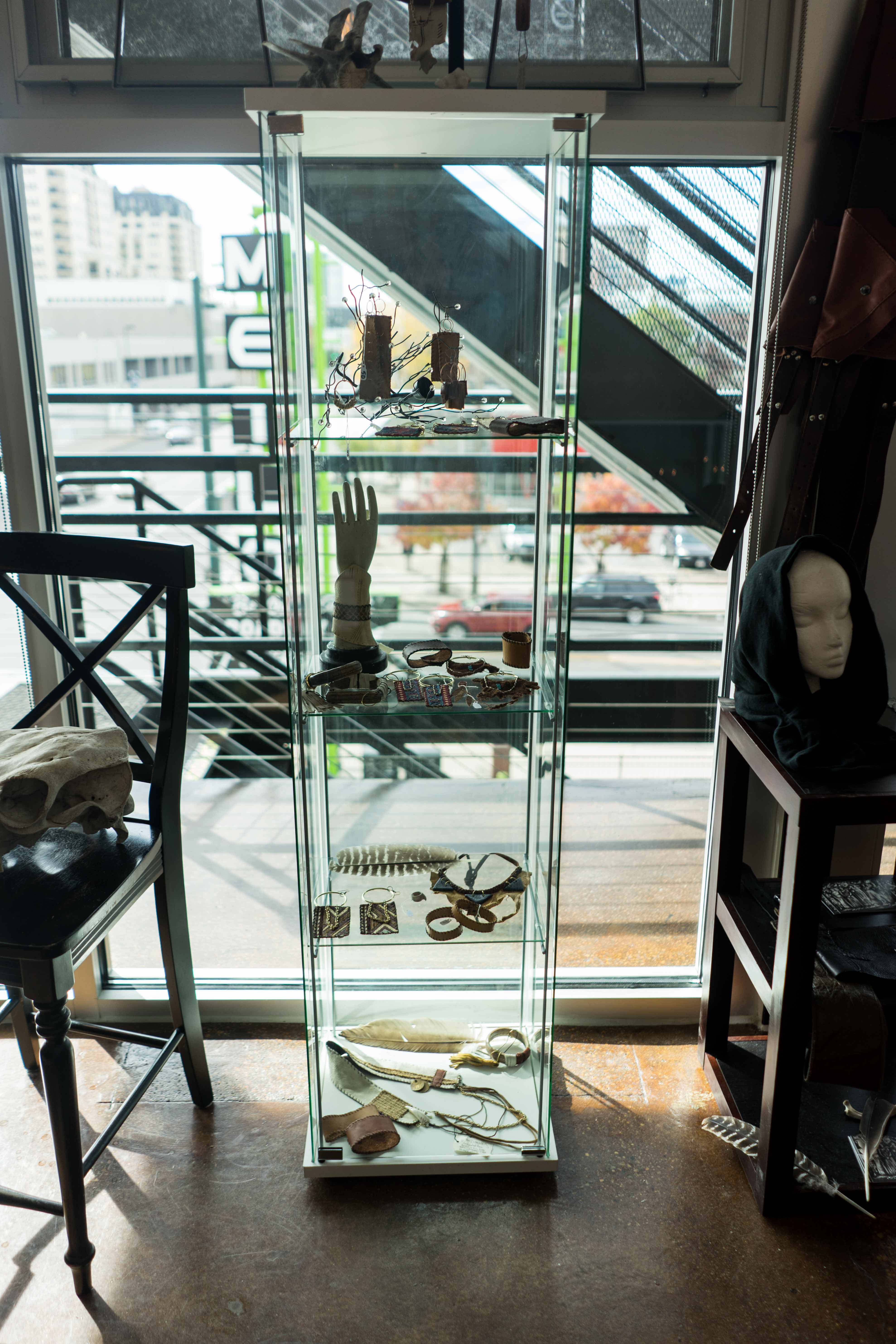 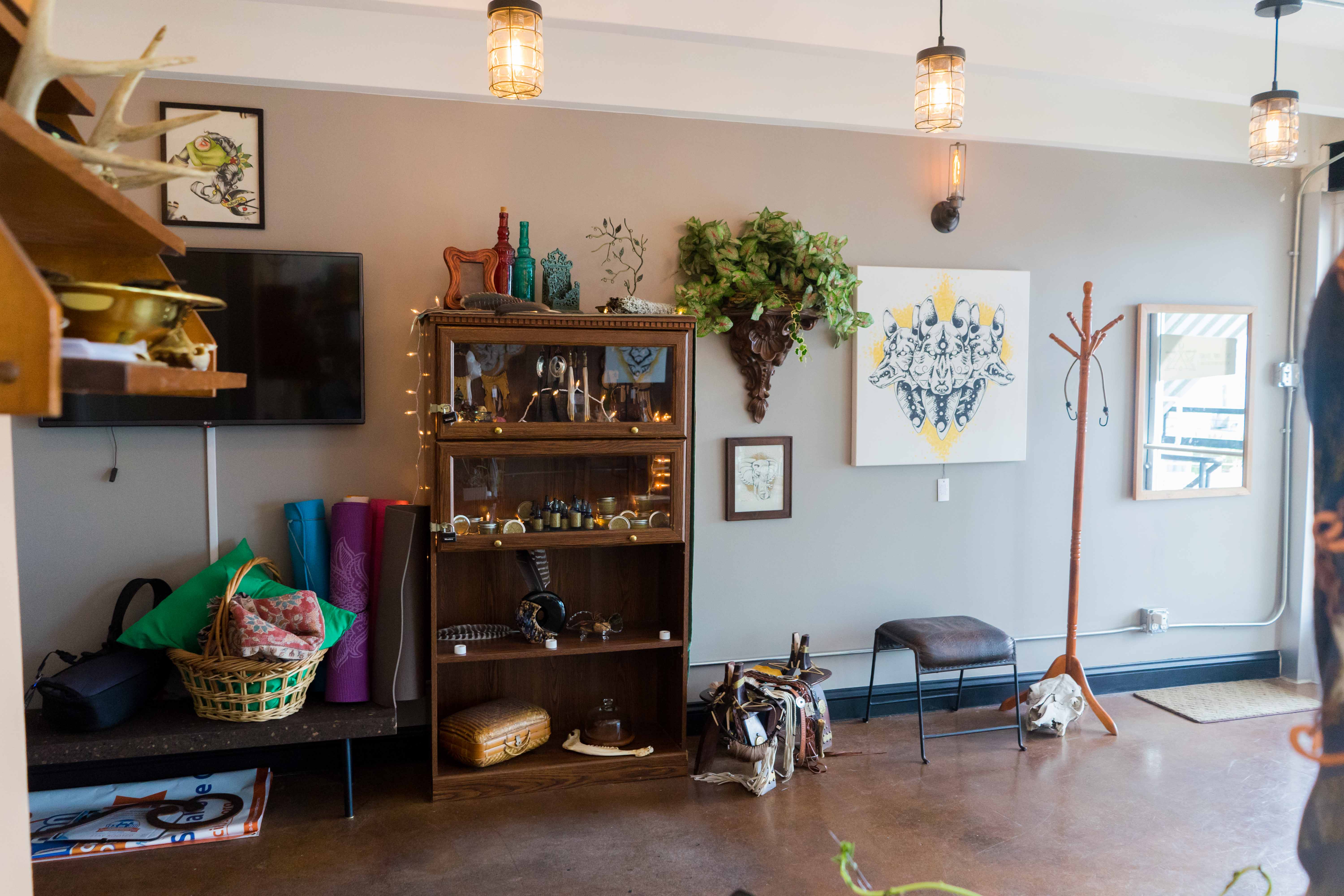