On October 24, 2014 a 57-year-old senior vice president of knowledge at Google, Alan Eustace, parachuted from the Earth’s stratosphere from an altitude of 135,890 feet. Beginning at dawn in Roswell, New Mexico, Eustace rose towards the stratosphere in a specially-designed space suit with a detailed and complicated life support system. Carried aloft for a two-hour ascent by a helium balloon, Eustace was released from the balloon by a small explosive device and dove back towards earth, reaching a maximum descent speed of 822 miles per hour, breaking the sound barrier and causing a sonic boom. His descent took a mere 14 minutes. Not only did Eustace break the sound barrier, he also broke Felix Baumgartner’s Red Bull Stratos world altitude record of 128,100 feet, which was set two years and 10 days earlier. 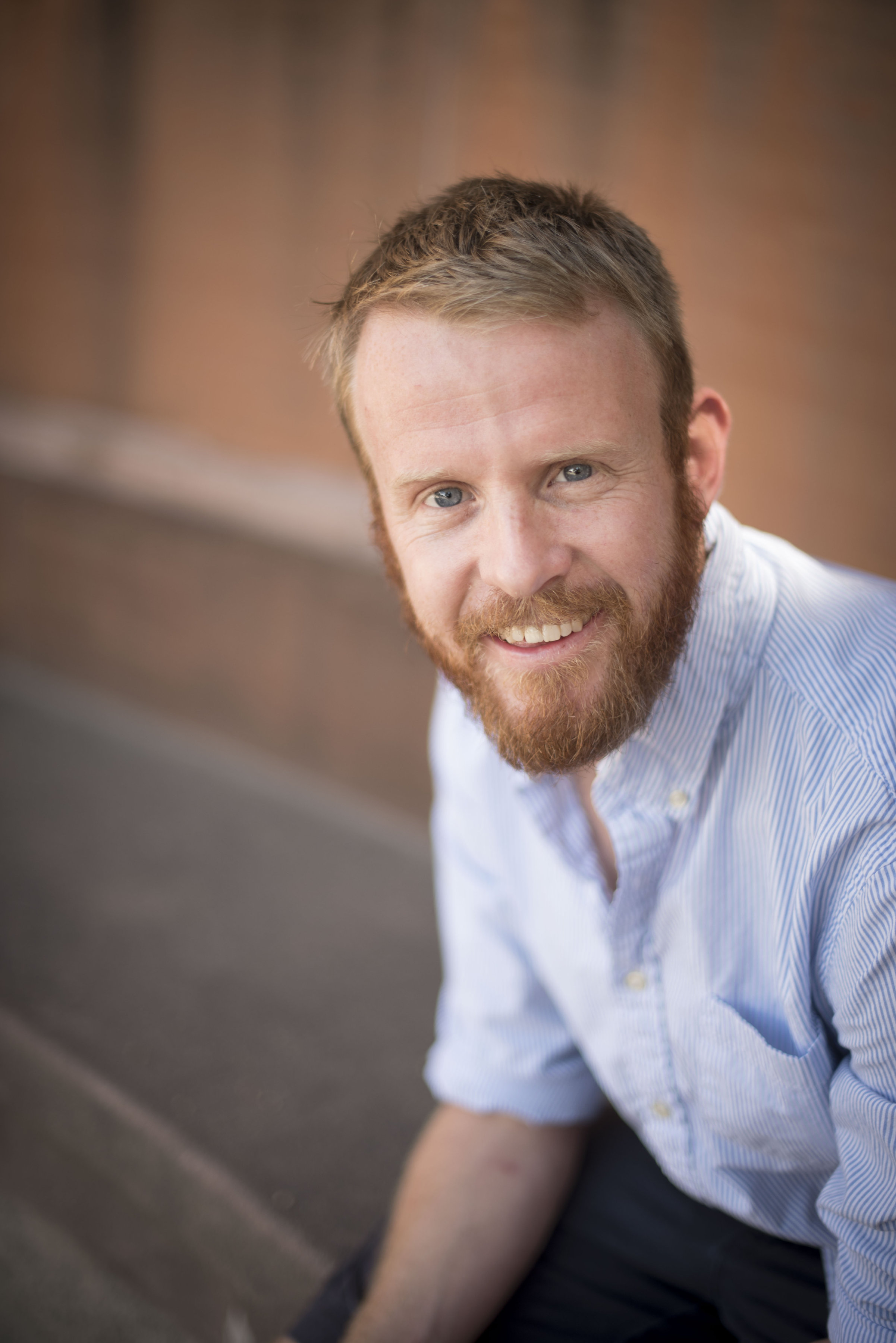 Unlike Baumgartner, Eustace was carried to the stratosphere in a specialized space suit instead of a complicated capsule system. Eustace was inspired by the idea that a suit, akin to those used in scuba diving, would be a more practical approach than a capsule. He began researching ways to turn his ideas into reality and was introduced to Taber MacCallum and Jayne Poynter of the Paragon Space Development Corporation. In 2011, the StratEx (Stratosphereic Explorer) program was developed and a team of scientists, engineers, aviators and skydivers embarked on a three-year journey to the stratosphere.

Colorado’s own Jared Leidich, who worked for Paragon Space Development, was chosen as the integrated product team lead which designed the life support pack, pressure suit and parachute pack. Over the three years it would take the StratEx team to accomplish their goal of reaching the stratosphere, Leidich also served as Eustace’s body-double for various testing phases of the space suit, giving him a unique perspective on the project and a first-row seat to the making of history.

On September 29, 2016, Leidich held the book launch of his first novel, The Wild Black Yonder, in a packed theater at Denver’s Mayan Theater on Broadway. The novel details his experiences as a lead designer on the pressure suit assembly that would be worn by Eustace as he set a new altitude record and successfully landed a free-fall skydive from the stratosphere back down to earth. 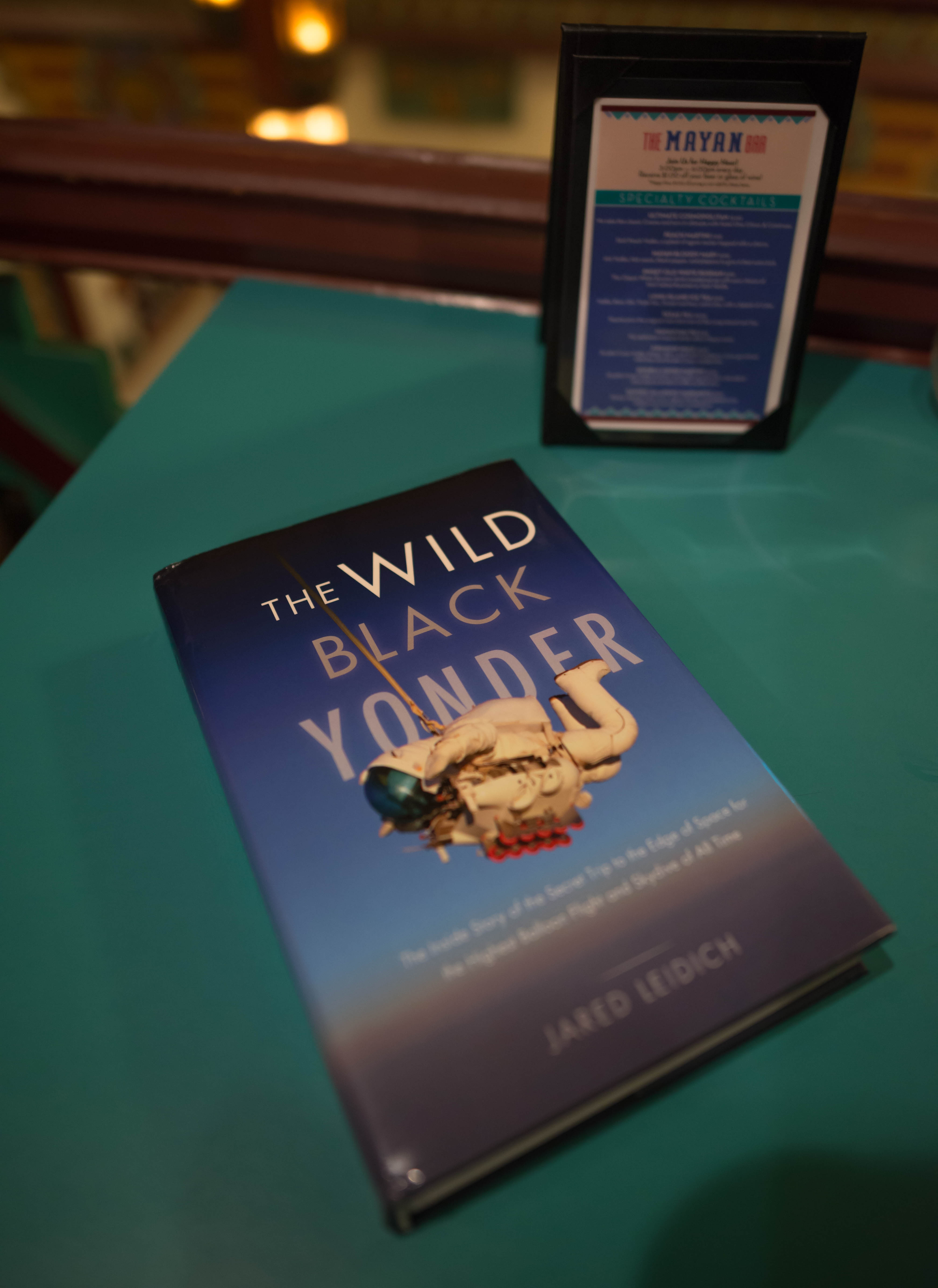 Leidich dedicates his book to his parents, Mike and Cheryl Leidich, who ignited in him a sense of exploration through engineering from a young age. Growing up in Colorado, Leidich spent many hours with his father, a mining engineer, on various projects like rebuilding cars, creating a go-cart from reclaimed parts and building a pottery wheel.

“Growing up, my dad and I were constantly fixing cars and tinkering on various things,” Leidich said.

In high school, Leidich had the opportunity to intern with Lockheed Martin, where he helped to build a wooden version of NASA’s Orbital Space Plane.

“My first internship with Lockheed was transformational. I had an incredible mentor, Leslie Rogers. She was a well-known name in the space life support world and I still don’t really know how a 17-year-old high schooler got to spend so much time with her,” Leidich said. 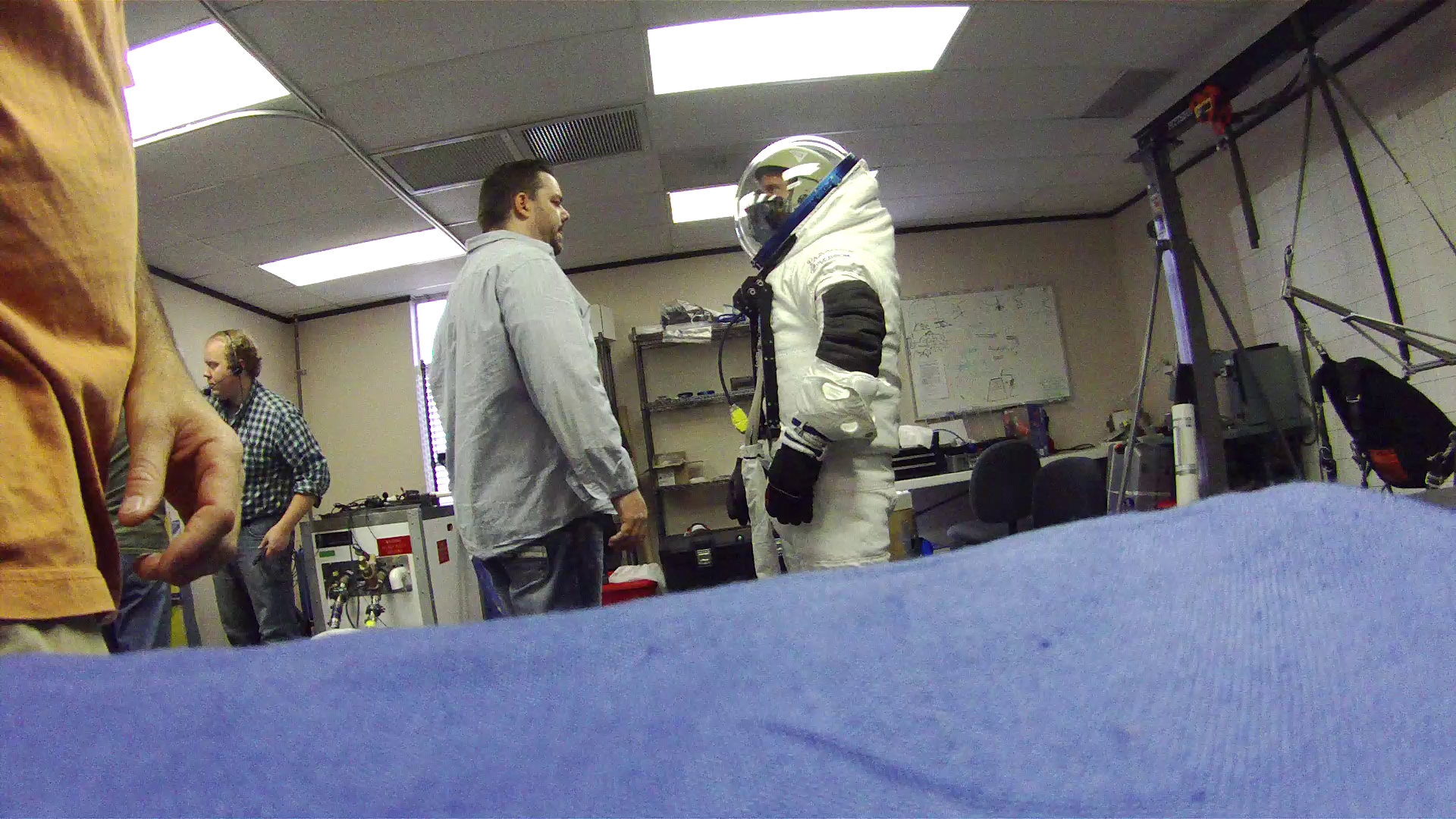 At the end of the project, two astronauts arrived in space suits to demonstrate how restrictive the suits can be and to test the accessibility of the components and levers inside of the space plane as if it were being used in a real mission.

“When they were done they let me, the intern, put on the space suit. It was incredibly memorable; I remember the suit being heavy, and being awed by the thermal undergarment with a million little tubes running all through it. I don’t remember being scared to get into the suit, which was the emotion that marked my next suit entries,” Leidich elaborated.

“Boeing had been investigating using a large spherical shape for a Rover to go to the moon or Mars. This looks like a giant hamster ball, four feet in diameter,” Leidich said.

The team had to come up with a way to solve the problem of sending a large ball, that was mostly empty space, 70 million miles into outer space.

“Our prototype used a network of composite rods on universal joints that allowed it to collapse into a cylinder when twisted so it would be small in the spacecraft and then deploy when it got to the surface of the moon or Mars. The project was considered for patent by Boeing,” Leidich elaborated.

During his final years in college, Leidich worked on satellites and life-support systems and rode on NASA’s microgravity airplane, twice, before taking his position at Paragon.

“[These] projects were a gigantic learning experience. I got a big taste of what working with groups of people was like. I was chewed up and spit out a couple of times in the transition from school projects that don’t really have to work correctly to building real assemblies that come with huge consequences of failure, and hosts of constraints like limited money and resources,” Leidich said. 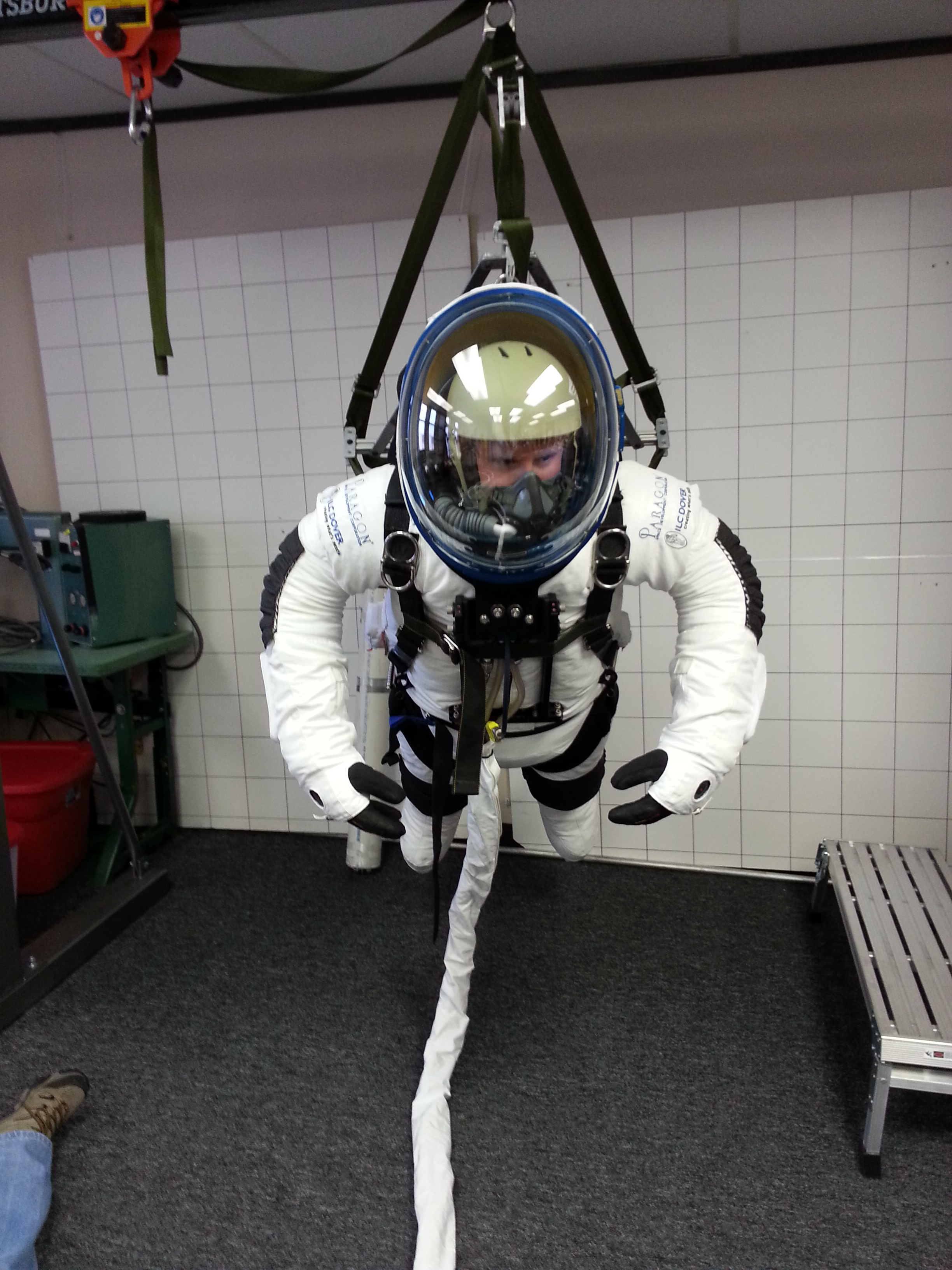 Tasked with being the pressure suit assembly lead, Leidich lead the StratEx team in overcoming the mountainous hurdles that would come with designing a multi-pressure, long-duration spacesuit that would be capable of exploring the stratosphere.

The suit had to be self-supporting and able to withstand long exposure to changing pressures and temperatures while keeping its pilot, Eustace, safe as he sailed to the stratosphere and plummeted back to earth in what would be a historical moment for space technologies, skydiving and aviation.

Leidich and his team spent three years designing, building, testing, failing and beginning again in order to create the suit that would carry Eustace to the wild black yonder of the stratosphere. Some of the failures that preceded the success of the final flight were experienced first-hand by Leidich as he served as the test pilot for the suit.

Leidich gave a description of what the suit was like. “When the suit is depressurized it feels like a really thick, 70-pound pair of coveralls combined with an 110-pound baby gorilla clinging to your chest (the life support pack) and a 70-pound backpacking backpack (the parachute). When pressurized, it feels like a hard shell turning you into a robot that can only make a few motions. In all ways, the suit feels claustrophobic and encompassing. The inside is rubbery and clingy, and the outside is slippery and thick. Perhaps one of the most notably bizarre feelings is sensory overload to the point that it’s hard to tell whether you are hot or cold; you end up relying on sensors to tell you the state of your own body.”

In November 2012, the claustrophobic and encompassing feeling of the suit was enhanced during a test of the complete suit systems while Leidich was serving as the test pilot. The airline was shut leaving him trapped in an air-tight, vacuous helmet and suit. The experience is thrillingly, recounted in Leidich’s book with nail-biting detail as he struggled to breathe and nearly blacked out. This was merely one of many heart-stopping moments during the development of the StratEx program.

“Wearing space suits can be pretty scary even when everything is working correctly,” Leidich said.

Throughout the challenges he faced, Leidich remained committed to the project. “After the event was over I was confident I was safe and undamaged and my focus shifted quickly to the programmatic implications of the event,” he said. 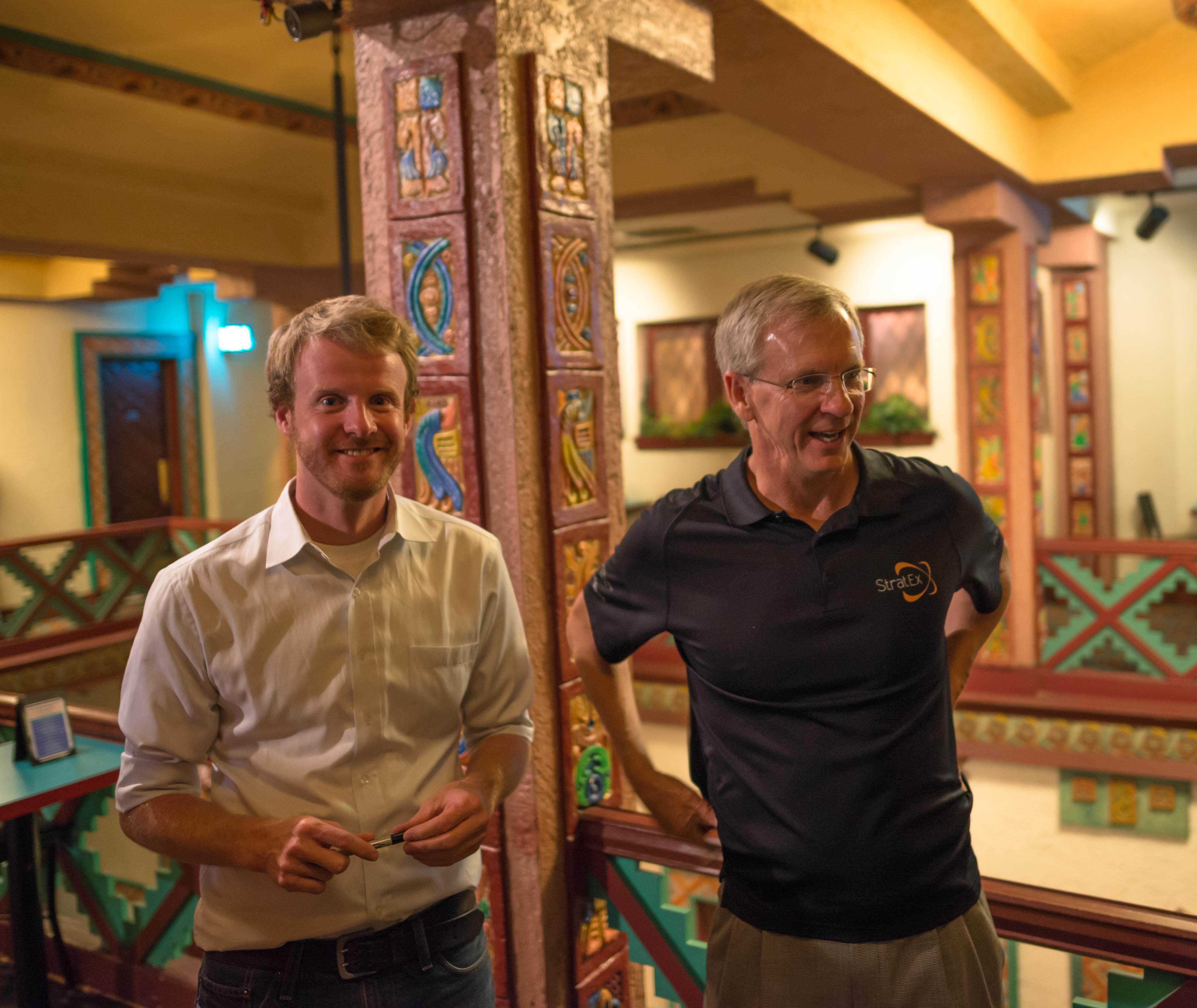 The passion for exploration and human progress that Leidich has developed through his work in space systems allowed him to push through the myriad challenges that he details in his book with intimate clarity. The Wild Black Yonder is a result of notes taken by Leidich over the three years that the StratEx team pursued reaching the stratosphere.

“I did not know if I was writing a book when I started taking notes,” Leidich said.

The book is an elegant marriage of science and the human experience of pushing the boundaries in search of new heights in aviation, stratosphere exploration and engineering. Leidich beautifully weaves the story of a team of driven explorers who beat all odds to create history and break altitude records. 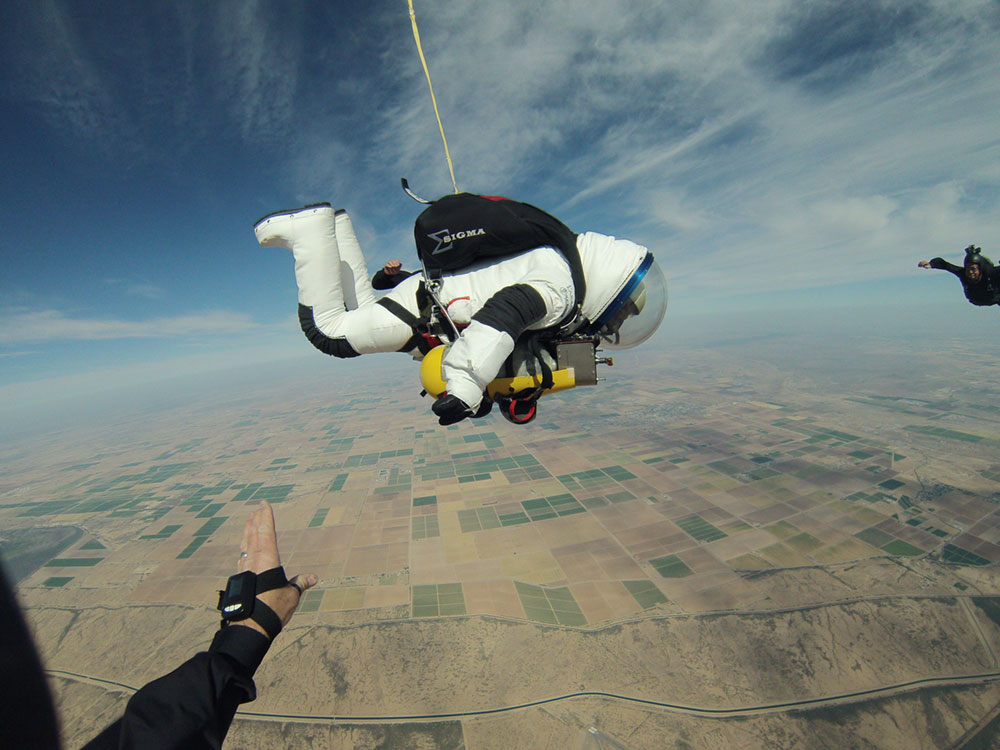 Image from the documentary, 14 Minutes From Earth   Photo courtesy of Falco Ink

Leidich plans on continuing to tour the book which is currently available on Amazon and at The Wild Black Yonder, with wider distribution coming soon. A documentary, 14 Minutes From Earth, detailing Eustace’s journey to the stratosphere will be debuting on Netflix and Amazon on November 15, 2016.

“The movie captures such an emotional core of Alan [Eustace], his family and the apparent trade between risk and reward in projects of this nature in a concise way. The book strives to tell the entire story, into all the nooks and crannies of our journey and takes on a high-level technical explanation of how we [made history],” said Leidich.