Local Artists Come Together to Beautify the Underbelly of I-70

[Update August 23 at 7:55 p.m.: the second edition of duct-work is underway with a community event on Saturday, August 26 from 2 – 6 p.m. This time you can see new work from 23 artists who will lend their expertise to beautify the underpass.]

This week, one of the most contested areas in Denver received a makeover. Nineteen local artists, in partnership with the Denver Arts & Venues Urban Arts Fund, came together to beautify the I-70 viaduct before it is demolished in early 2018.  The corridor became a point of contention when the state unveiled its plans to expand the section of I-70. Opponents of this measure argue the expansion is a costly, ineffective project that will only cause pollution and displacement of residents in the Globeville, Elyria and Swansea neighborhoods. But those involved with the expansion contest their focus remains on improving the community. The current project, dubbed ‘duct-work, aims to drive that point home.

“[This] is a part of the vision of what we want I-70 to be in the future,” said Rebbeca White, Public Affairs Director for Central 70 and Colorado Department of Transportation (CDOT). White explained the submerged highway will sit 35 to 40 feet from where the current viaduct lives. On top will be a “highway cover” that features a four-acre public space. However, with the project not starting until 2018 and the current viaduct an eyesore, local artists, such as Yiannis Bellis, saw the massive concrete walls as an opportune space to showcase their work.

“There are artists here from the neighborhood. This has been their landscape for many years, so to be able to bring them together is fantastic,” said Bellis. “It’s a total win-win for the community because driving through here has been so drab for so many years and these places are way past their shelf life of getting torn down — and driving through here could  inspire you or spark your day.”

The murals, some as large as 15 feet tall, span the stretch of road between Brighton Boulevard and York Street near 46th street. The works feature everything from floral and geometric designs to one made by artist Paige Madden, who used found objects from the viaduct to make her piece. 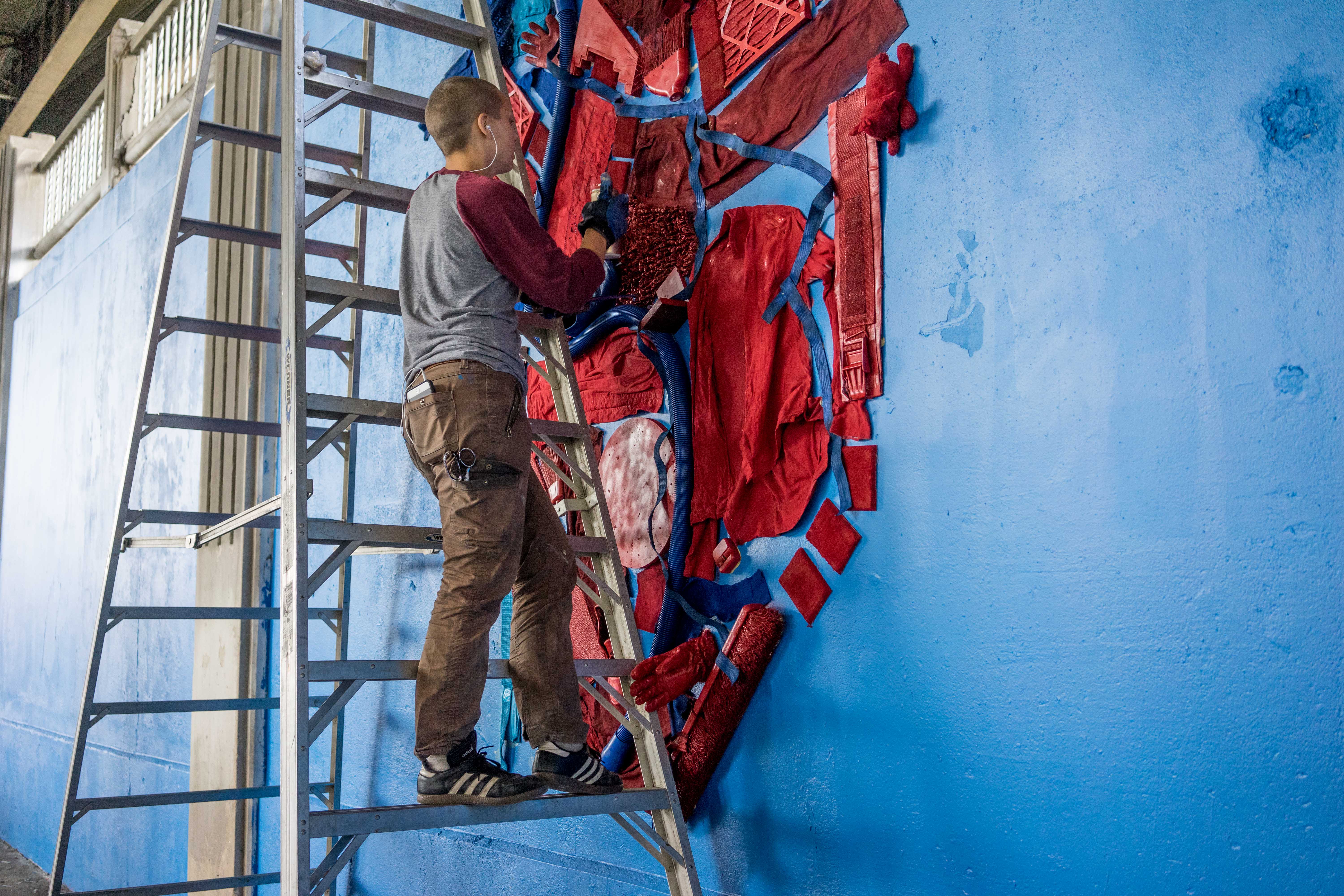 Shaped in the form of a human heart, Madden gathered everything from toys to shoes and other clothing items and then reused them in  her work as a way of giving them new life. She sees her project as well as the pending demolition, in some sense, as an act of reincarnation.

Other artists such as Anthony Garcia Sr. and Thomas Scharfenberg are both residents of the nearby neighborhoods and explained their participation was, in part, a way to give back to their community. Garcia, who operates the non-profit Birdseed Collective, elaborated that no matter the changes that come to the community, the focus remains on the residents:

“Birdseed collective is a neighborhood organization, so whoever it is we’ll make sure to help them out,” said Garica.

The I-70 expansion will not be the last of the changes to come to the area. Plans to remake the nearby Western Art Complex, as well as an overhaul of Brighton Boulevard, are currently in the works. Named North Denver Cornerstone Collaborative, the plans will add protected bike and pedestrian lanes as well as an urban green space that is said to help with water capturing.

“The first segment is slated to be done winter 2017-2018 so you’ll start seeing some changes here very soon,” said Morgan Hartley of the North Denver Cornerstone Collaborative. “There’s an enormous amount of change in these neighborhoods.”

In the meantime, beautification of the I-70 viaduct will continue throughout the weekend, with many murals still in the works. Tomorrow, October 1, you can visit with the artists and learn more about the project from 10 a.m. to 2 p.m. during a community gathering where there will be food, music and even a community wall where children are encouraged to contribute.