Standing on a muddy field in snow boots, three layers, and a ski jacket, August had arrived in Telluride. But to the thousands who had trekked to the Southwest Colorado ski-town, Pretty Lights had arrived. 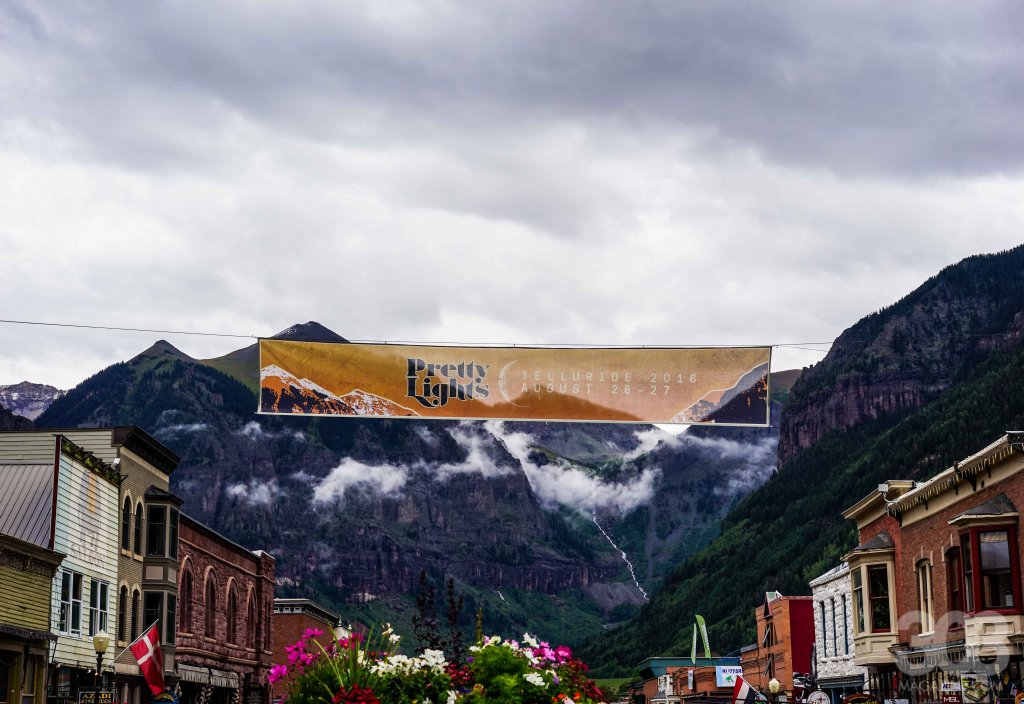 Along the rustic main street, Colorado Ave, banners adorned empty ski outfitting shops marking the weekend with a “blizzard sale” to commemorate the first snowfall of the season—even if it was before Labor Day. But in this village surrounded by exclusive condominiums and dormant ten-bedroom vacation lodges, it was not the winter-retreating elite filling the streets with designer ranch wear, but rather ragtag mobs of young, twentysomethings adorned in flat bill caps and skiwear fresh out of 2013 online clearance sales.

This amongst many juxtapositions would set the scene for much of the Pretty Lights weekend in Telluride. Colorado native and CU Boulder dropout, Derek Vincent Smith, descended upon the box canyon for the second annual festival in Town Park, Telluride. 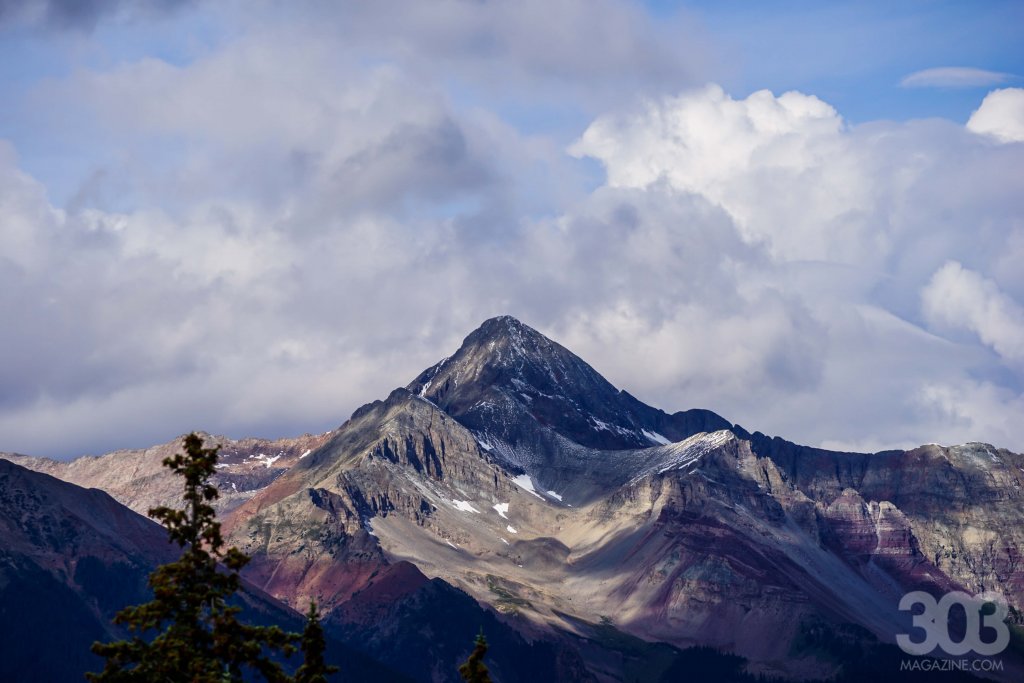 The sun managed to hide behind rainclouds both Friday and Saturday, but showers held as temperatures fell to just above freezing as the music began each night. In the final hour of PL’s Saturday set, a light drizzle fell on the festival, but did not deter a single attendee. The lasers exposed these falling droplets, creating a mesmerizing blanket of sparkling dots overhead, besprinkled amid a blanket of neon green.

Both Friday and Saturday as front man Derek Smith and company echoed throughout Telluride, video sequences provided the occasional background to the performances. Infrequent footage of concrete urban structures, highway underpasses, and barbed wire industrial parks contrasted the mountainside aspen groves immediately behind the stage and the Bridal Veil waterfall just beyond the center of the small town. These bursts of metropolitan backdrops provided an optical anomaly, as bleak reminders in contrast to the encompassing landscape. 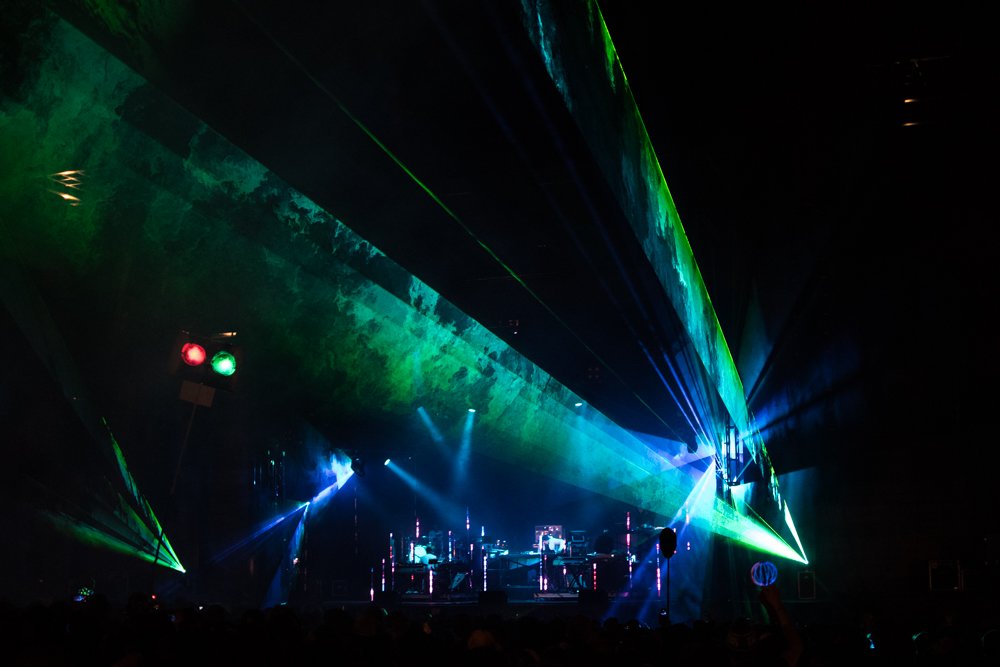 The video footage was undermined in comparison to the laser display that captivated the entire park. Throughout the two-night performance, Pretty Lights stood behind a façade of horizontal lasers and lights casting shapes on the surrounding San Juan Mountains. The manufactured lights created a ceiling of ethereal colors and were as spectacular as the natural setting of the festival. The illuminative spectacle was provided by “LazerShark,” lighting designer extraordinaire who was well known and spoken about amongst the Pretty Lights regulars. The lights, accompanied by the choreographed smoke (both machine and stoner-made) brought beauty to the darkness when the freshly snowcapped mountains were quickly fading into dark silhouettes in the night sky.

While the light show created a visual feast, the genre-mixing Cuisinart that is Pretty Lights cast a spell on festival goers.

Both sets from the two-day festival featured the entire spectrum of what Pretty Lights has to offer. Changes in tempo, speed, instruments, and especially genres made the sets unforgettable. The band transitioned from slow tempo jazz melodies with electronic flirtations into bass heavy, head-thumping electronic beats. Fuzzy hip-hop vocal samples led the way to some of the band’s large hits like “Finally Moving” and fan favorites like “Yellow Bird.” Pretty Lights incorporated Steve Miller Band’s “Fly Like An Eagle” into the Saturday set as “time keep on slipping” was looped and fell upon smooth trance melodies. 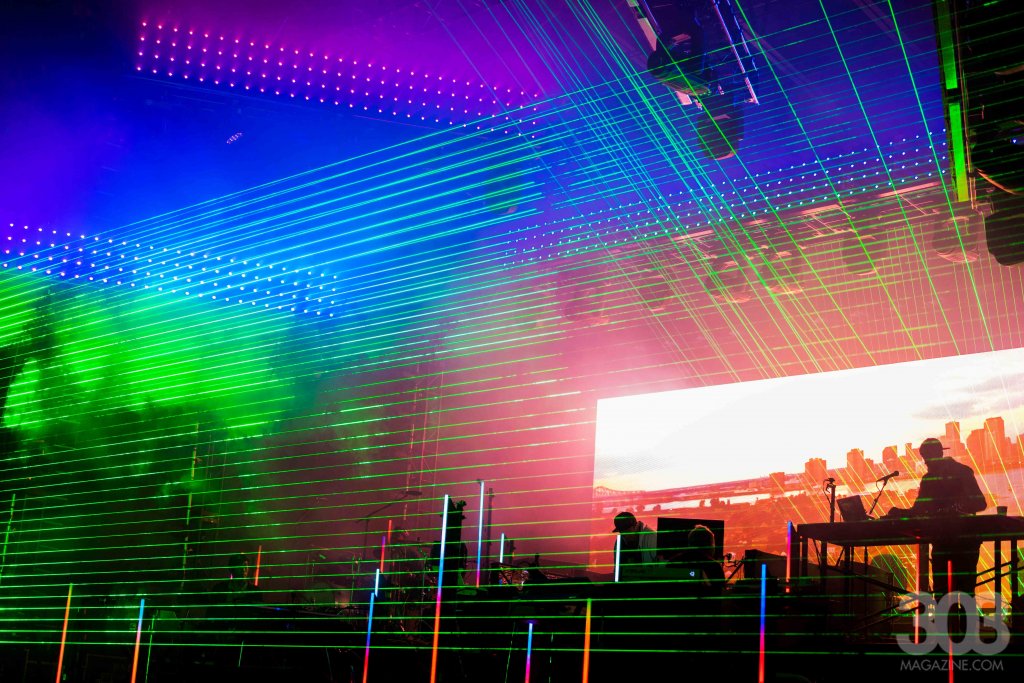 Accompanying Derek Smith, Pretty Lights featured main sets with a DJ (a real, vinyl scratching, turntable DJ), keyboardist, drummer, and additional drum machine and electronic support. But front man Derek Smith stole the show after a call and response session (which he later joked about never doing in live shows) led to an impressive freestyle rap. In the freestyle, Smith emphasized that it was “all about connection” and that the band would definitely return to Telluride for a third consecutive year—shedding light to rumors throughout the weekend that Pretty Lights would not be returning after this year. Smith lauded the Pretty Lights faithful for their respect for their weekend environment saying, “this place is gonna look spotless tomorrow.”

Pretty Lights fans did enjoy their weekend home away from home. Many came from across the country to experience what this special performance in a rural mountain setting. Conversations with fans quickly exposed their cult-like loyalty as they highlighted how far they had come for the weekend and previous shows that they attended in multiple locations throughout the country. Fans of Pretty Lights loyalty were made evident by pins from previous shows attached to nomadic and over-the-top ensembles. Everything from animal onesies, yoga wear, exotic silks and pashminas accompanied traditional festival accessories such as face paint, floral headpieces, and of course, glow sticks. 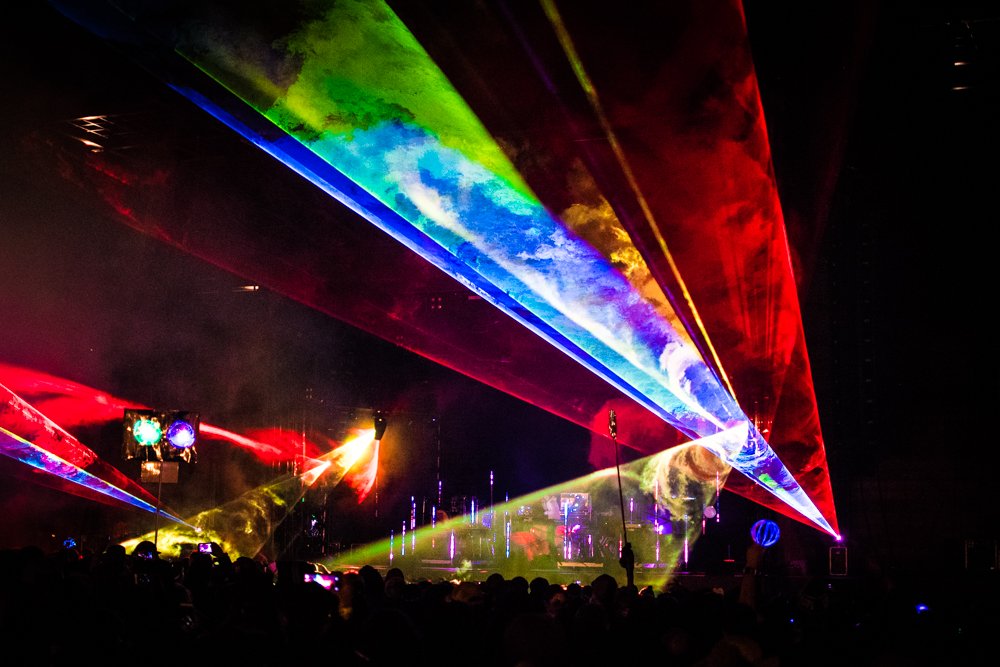 As each night ended promptly after 11 p.m., (due to strict noise ordinances) festivalgoers quietly fled the muddy grounds into town to find late night activities. Talks of after parties made the rustic ski village seem as if it were comparable to SXSW as concertgoers took to their phones to find the next venue or cram into vacation rentals to imbibe with friends. Others fled beyond the town limits to state campsites and on Friday night, were treated to late-night clear skies and views of the entire Milky Way galaxy.

No matter where you ended up this weekend in Telluride, beauty enveloped the Pretty Lights festival. Fresh snow decorated the knife ridges high above the box canyon. Awestruck faces attached to dancing bodies stared fixated towards the stage while the accompaniment of digital and analog vibrations rocked the San Juan Mountains, Pretty Lights dazzled brightly.