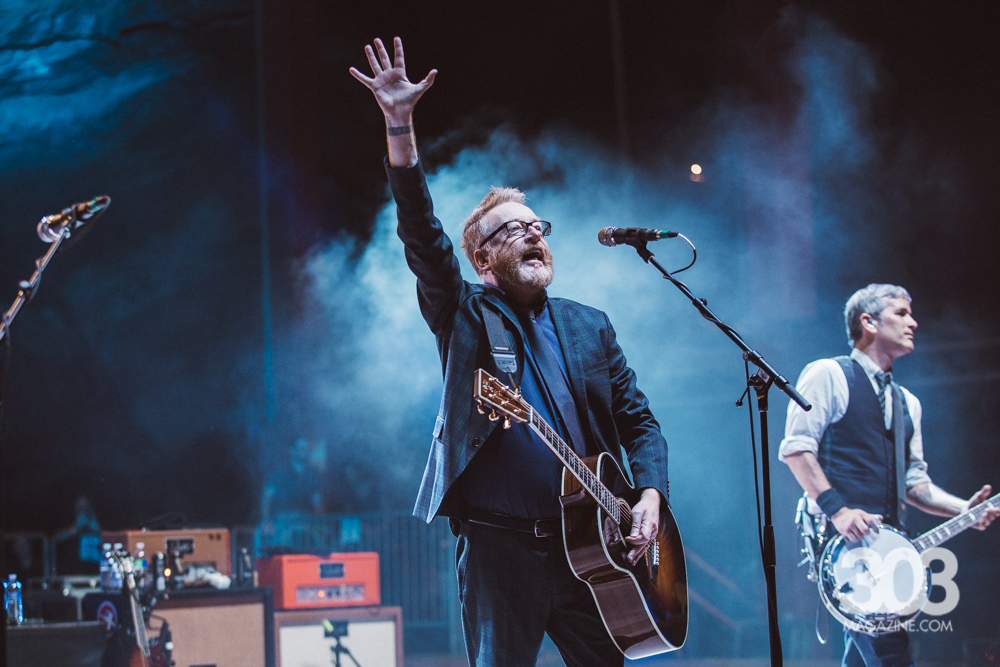 The rocks of Red Rocks glowed green on Monday night, in celebration of Flogging Molly making a raging appearance. With openers like Chuck Ragan and Frank Turner, the punk in all of us came out for a jig.

The flow of fans filled the venue early, with a near full house by the time Frank Turner took the stage. The English rocker was accompanied by his backing band, The Sleeping Souls, and the five men triumphantly entertained the audience for nearly an hour.

“Because there’s no such thing as rockstars, just people who play music,” Turner belted out in the banger “Try This at Home.” A lyric which felt ironic, with the group wearing white button up shirts, suspenders and newsboy caps, they sure looked like a seasoned group of punk rock stars. Crowd favorite “Recovery” earned a hefty reaction from the sea of old and young fans, making it hard to tell if the mass of people had actually showed for Turner. “Long Live the Queen” went flowing through the waves of the Red Rocks air as a perfect sliver of the moon crept over the East boulder, shining light onto the dark fans.

A track Turner referred to as a “story” called “Silent Light” off of his newest album, Positive Songs for Negative People, went tossing in a heavier vibe, dissecting the untimely death of Christa McAuliff and her fellow astronauts on board the fatal 1986 Challenger. Turner rose spirits again soon after by poking fun at American politics stating, “America is the friendliest country that we tour. Now, I would never tell anyone what to do, but the America I know is better than a lying racist with a shit haircut.” After the laughs, Turner ended his set with “Four Simple Words,” which of course translates to: I want to dance. 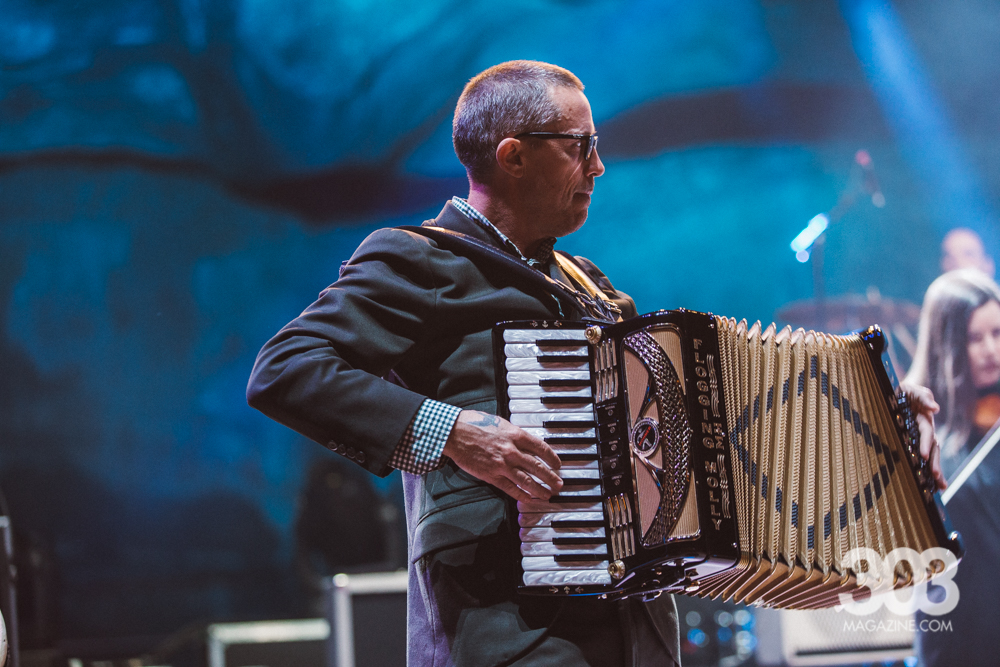 Not more than a swig of Jameson later, the main attraction had the horde of fans back on their feet. “(No More) Paddy’s Lament” and “The Worst Day Since Yesterday” being of the first songs of the show, an early ruckus could be sensed for the night. However, the band joked that Red Rocks lacks in space for moshing.

Not only lacking in space, the venue also apparently keeps a low stock of ventilation. “I know you guys are used to the altitude, but my doctor tells me to drink as much of this as I can to help me,” lead singer Dave King explains while holding up a large can of Guinness. 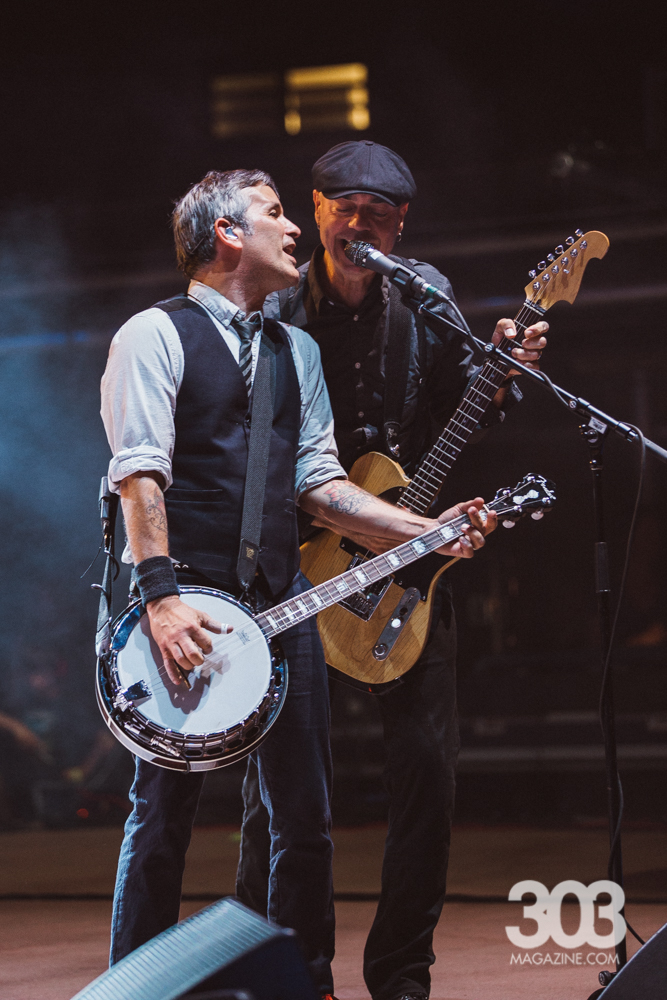 With “The Killburn High Road” causing groups of friends to latch arms and sway along to the well-known track, an overwhelming sense of community was visible among the flock of Celtic-punk enthusiasts. “Requiem For a Dying Song,” “In This Present State of Grace” and “Spoken Wheel” weaved together to create a dream setlist, and became visually complete with lead singer Dave King marching back and forth across the stage, his wife Bridget Ragan slaying away on the  fiddle and Bob Schmidt going insane on the banjo and mandolin.
With “Black Friday Rule” and “Revolution” hyping up the eccentric crowd, King took a breather to again introduce Chuck Ragan, Frank Turner and the rest of the band, gifting the patrons with a small anecdote per musician. 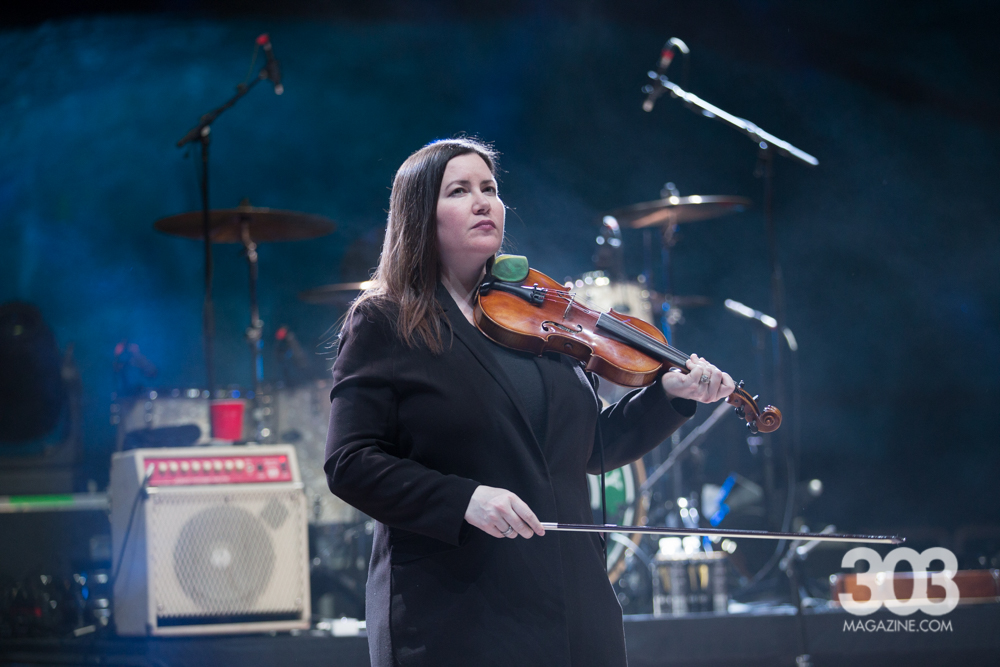 “Float” took the evening from small talk onstage back to the moving grooving eve that it had previously been, but it was Bridget, wailing this time on her tin whistle during ‘Devil’s Dance Floor,” that seemed to call out the energy of all in attendance. “What’s Left of the Flag” and “If I Ever Leaver This World Alive” then closed out the main set for the boys, and they retreated for a quick tease backstage. 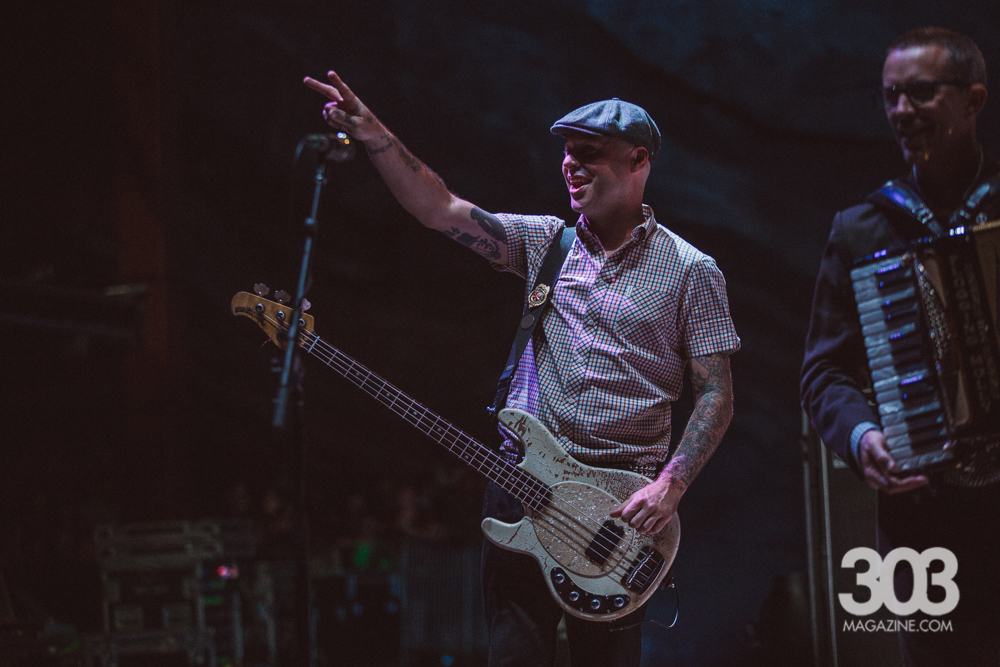 No longer than an old fashioned bar brawl were the lads out again, ready to unleash their final songs for the encore. After singing “Happy Birthday” to an apparently lovely fellow named Patrick, “Seven Deadly Sins” had beer once again sloshing out of plastic cups. “The Story So Far” closed out the night of original tracks for this particular performance, but not before a few more introductions on stage and an epic announcement for a possible upcoming album. As the 11:30 p.m. curfew approached, the gang of punkers ended their Red Rocks night with a little on stage dance party to Monty Python’s “Always Look on the Bright Side of Life,” and just like that, the evening ended at the Speed of Darkness.