Home Cooking – Tips From a Chef

Cooking can be daunting. Screaming children, judgemental friends and the ever-present ability to set your house on fire are all compelling arguments to order takeout. But with a basic understanding of the science behind food, coupled with a desire to learn, the confidence to try and fail (and enough wine to feel better after you try and fail) and a fundamental love of cooking, anyone can produce great food.

Here are a few tips and tricks that will make you a better home cook. But seriously, don’t set your house on fire.

The Magical Properties of Salt 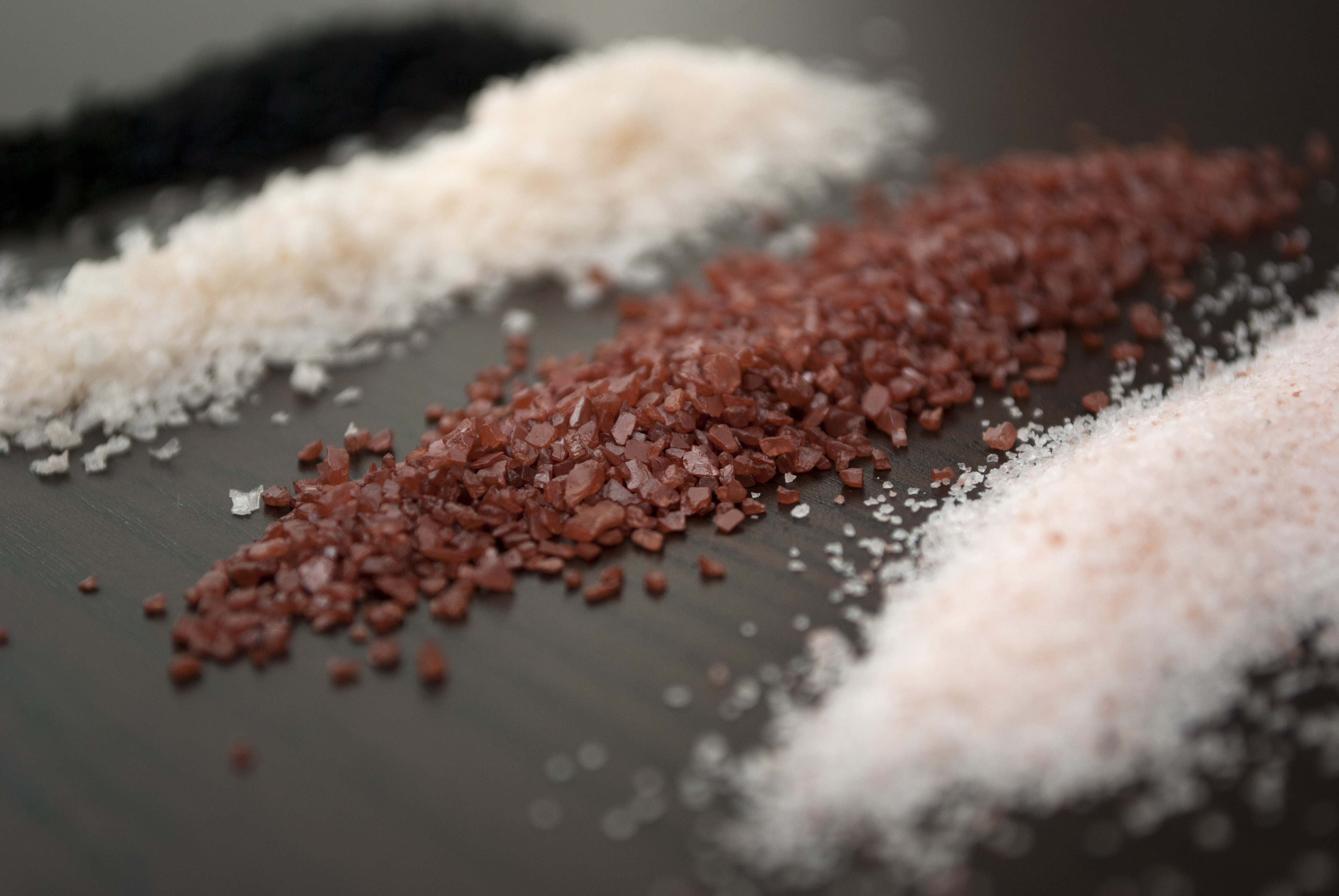 All photography by Justin Barbour.

When I say salt has magical properties, I’m not being flippant—salt is amazing. You should be putting salt in everything. Seriously, I mean everything. Let me explain why. The sodium ions (food molecules) in salt interfere with the transduction mechanism (stuff hitting our tongue) our brain uses to ‘taste’ food. Because of this, salt has the ability to enhance natural flavors in food while simultaneously suppressing bitterness. In short, salt makes food taste more like food.

Now before you go increasing your sodium levels, I don’t mean a lot of salt—just a pinch will do. The trick is that you don’t want to be able to taste the salt. But because the salt enhances other flavors you can often decrease the amount of other unhealthy ingredients like sugar and fat.

For example, I put salt in my coffee. Add less sugar than you normally would, a pinch of salt, and your morning coffee will be less astringent and have a complexity you’ve not experienced before. I also recommend salt on grapefruit, chocolate, margaritas and any overly sweet desserts.

Don’t Put Bread in the Refrigerator 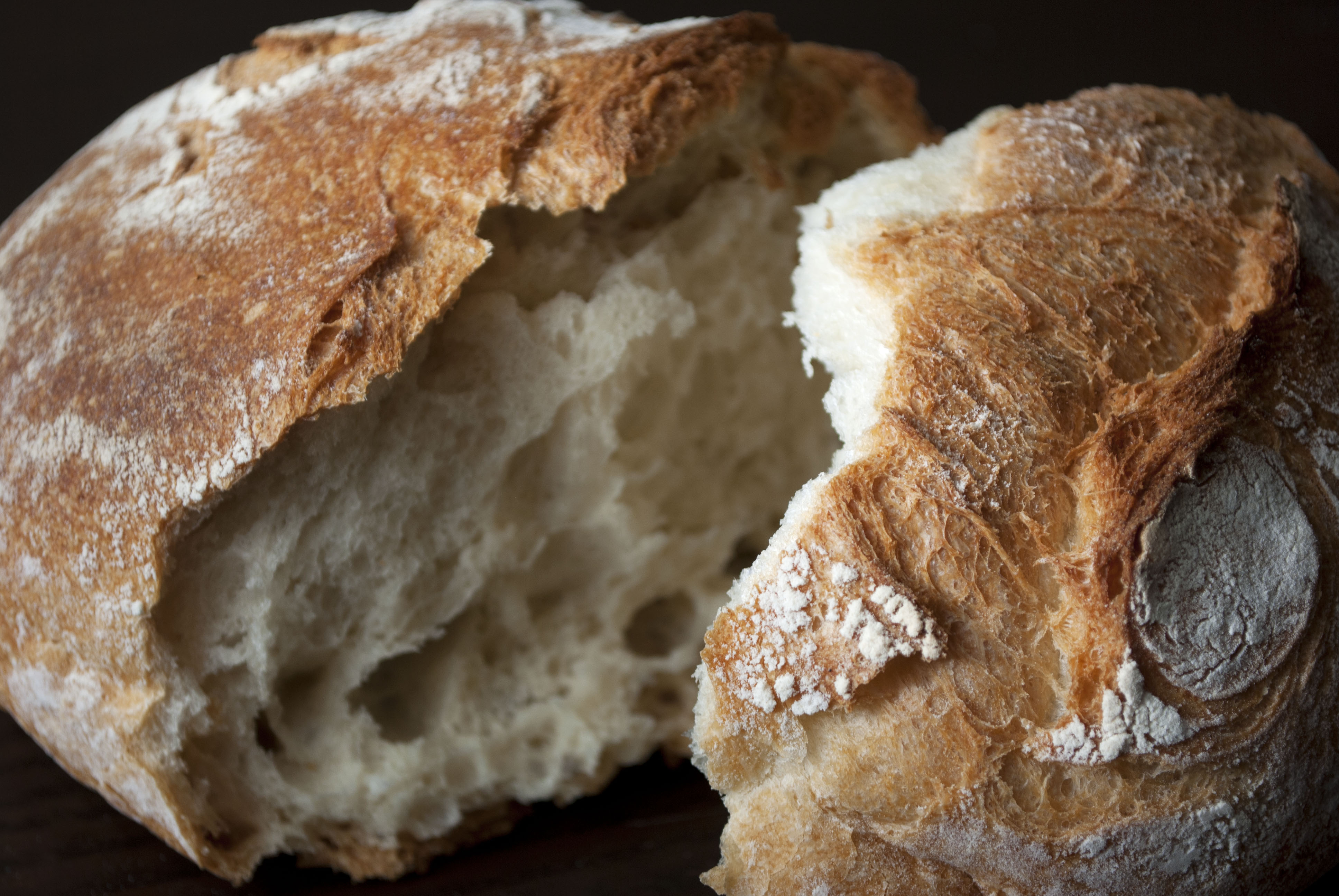 Don’t do it. When bread is in the oven baking, tiny packets of starch granules explode, distributing starch molecules throughout the dough. However, the second the bread starts to cool down, the molecules slowly start migrating from the interior out towards the drier crust. These molecules start to realign and recrystallize in a process called retrogradation. What this means is, opposed to common belief, bread going stale has nothing to do with water loss.

In fact, this process happens much faster at temperatures just above freezing—i.e. the temperature of your refrigerator—but is almost entirely suspended at temperatures below freezing. If you’re not going to use your bread quickly, you can freeze it and prolong its shelf life by a few months. With that said, refrigerators do prevent molding. However, if you’re using a name-brand, commercially-produced “bread”—an item that doesn’t contain enough bread related ingredients to actually be considered bread—the refrigerator can be used, as that bread is never going to stale anyway.

Add Lemon or Lime to Your Fish 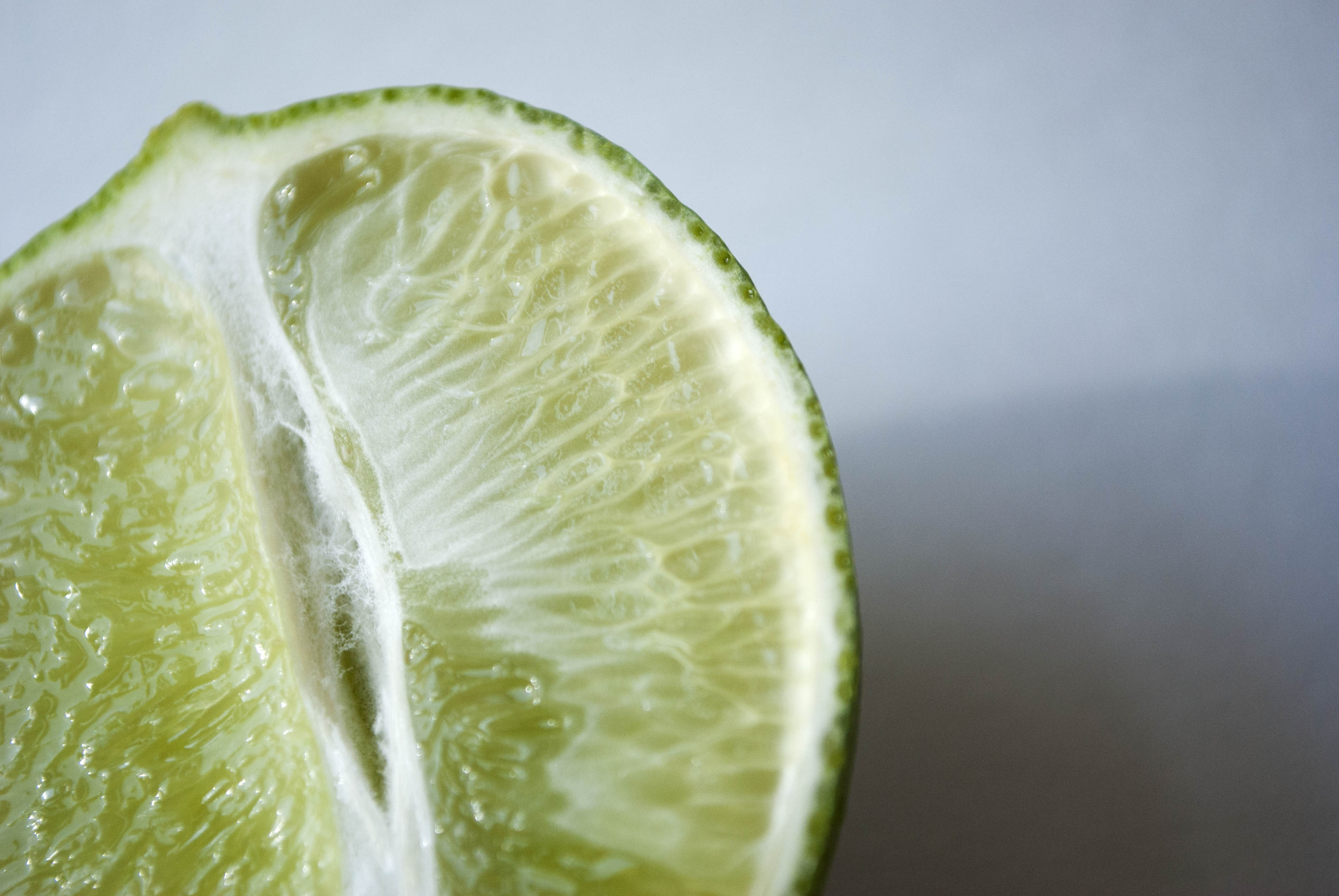 Our bodies are better chemists than we are. We naturally pair certain foods together that are chemically linked without even knowing we’re doing so—carrots and parsley, lime and tequila, coffee and cigarettes. It’s an evolutionary trait that comes from watching Fred eat the poisonous berries and then not eating things that tasted like those berries.

For example, when fish is cooked, it produces a molecule called amine, a compound derived from ammonia—or what is often associated with the “fishy” taste in fish. Amine and ammonia are bases with a high pH value and lots of alkaline. Lemons and limes contain a large amount of citric acid, which has a low pH value. If you remember your second-grade science class, combining a base and an acid elicits a reaction (think baking soda volcano). However, in this case, the citric acid neutralizes the alkaline flavor and reduces the “fishy” flavor of the dish.

The citric acid and low pH level of several fruits are also thought to reduce or overpower the bitterness found in other higher alkaline foods, like alcohol, which is why we pair cocktails with fruits and acids.

Blanch and Salt Your Green Vegetables 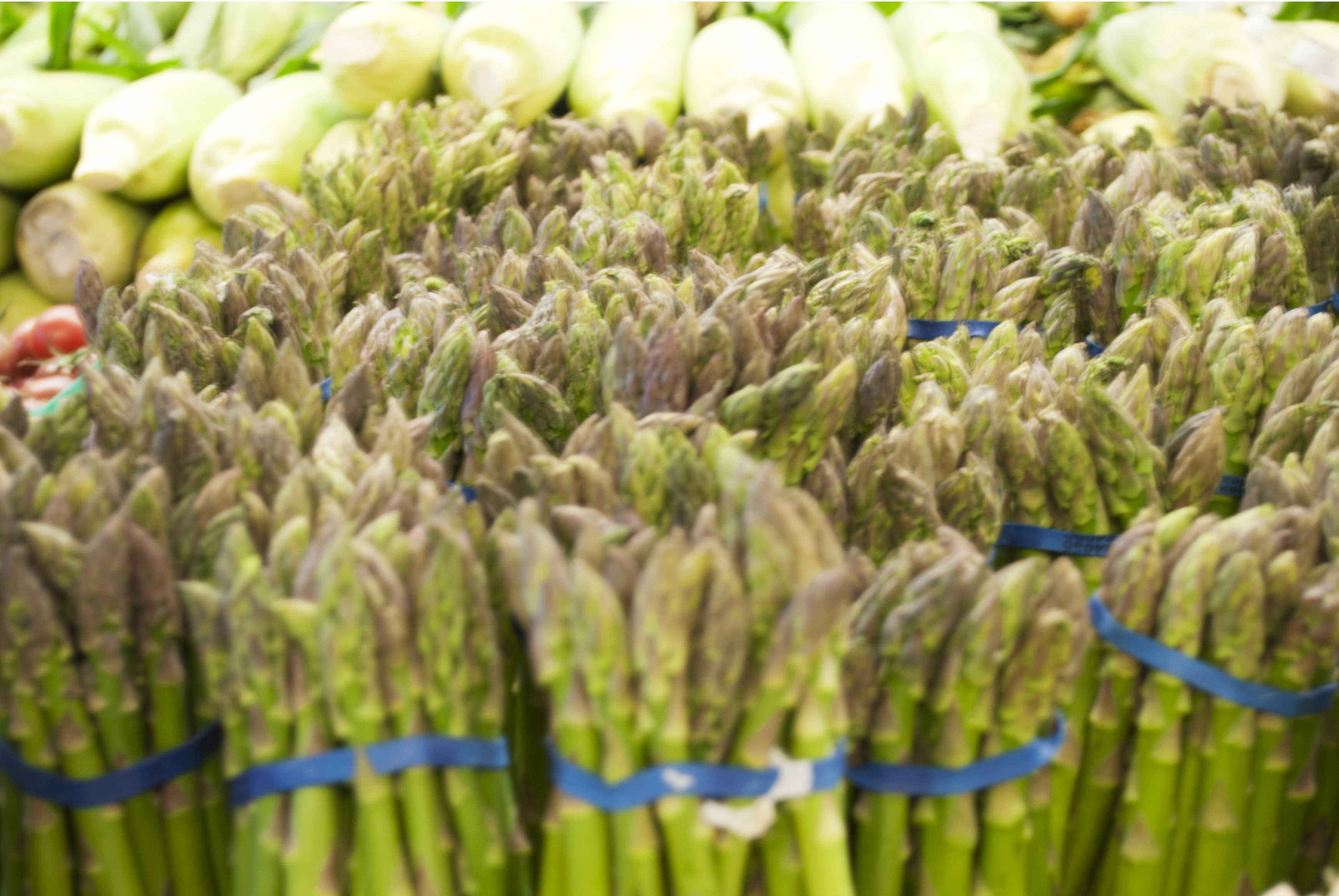 Chlorophyll, the reason your green vegetables are green, and can sometimes smell like rotting eggs, is a pigment found in plants responsible for the absorption of light called photosynthesis. When chlorophyll is cooked, it produces carbon dioxide. Blanching—the process of ‘cooking’ a food in boiling water for 10-20 seconds, then immediately cooling the food to stop the cooking process—creates a barrier against carbon dioxide and prevents minerals and vitamins from leeching out.

Do you wonder why every time you cook vegetables you seem to end up with a pile of mush that resembles baby food? Both blanching and salt (seriously, salt is amazing) retards enzymes from rupturing cells during cooking, which helps prevent the loss of flavor, vitamins and color along with improving the structural integrity of the vegetable (in other words, it keeps things crunchy). 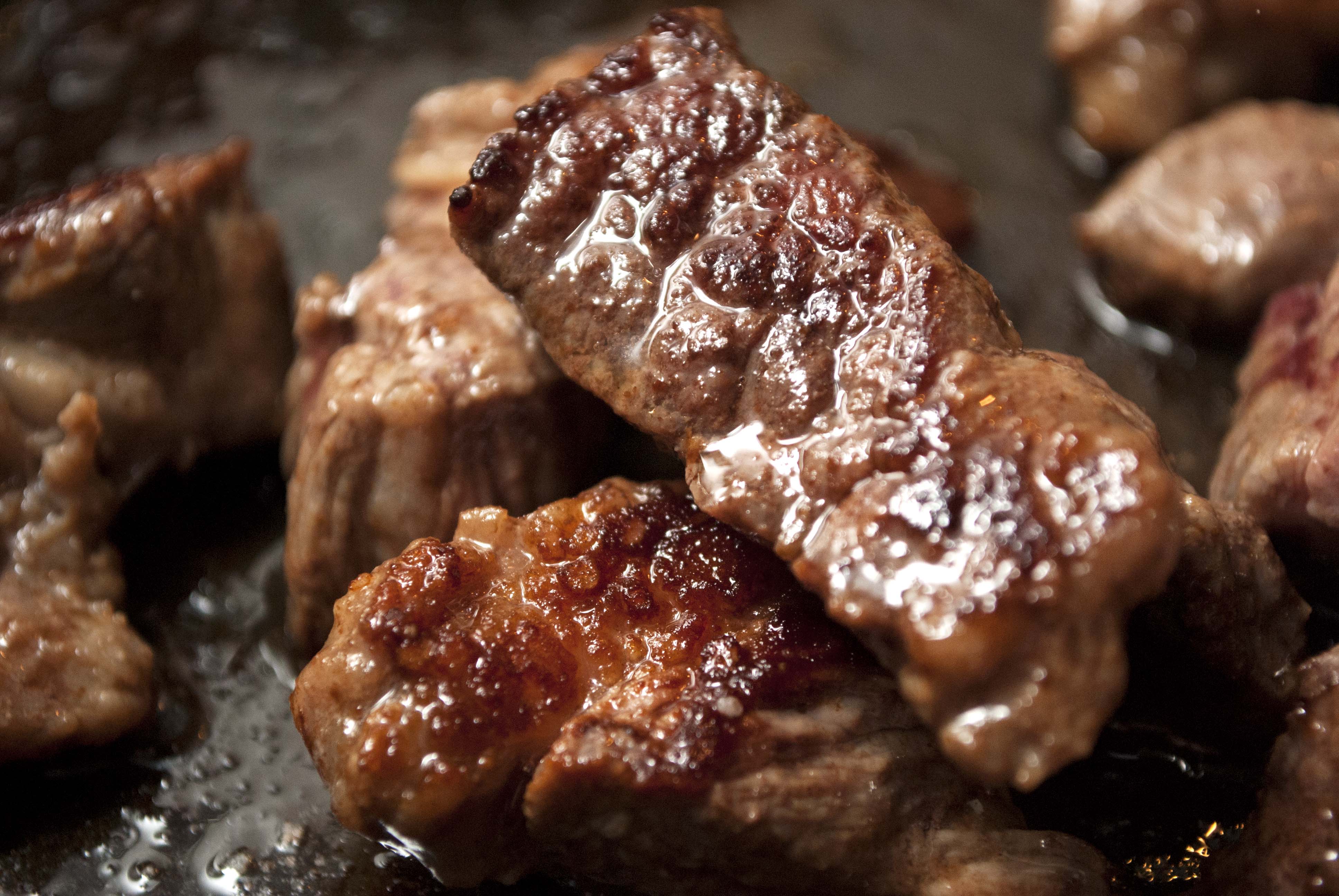 The golden brown sear on the outside of your steak comes courtesy of the Maillard reaction (pronounced may-yard). When proteins are heated, specific simple sugars and amino acids rearrange themselves into rings that appear brown in color and produce a myriad of flavor and aroma compounds. Different types of food produce different compounds and molecules, which is why baking bread smells and taste different than roasting meat, even though both depend on the Maillard reaction for flavor. High pH levels (alkaline) also aid in creating this reaction. This means that adding a small amount of egg whites or baking soda to your marinades for things like stir-fried meats will give you a better sear outside. This is the same reason we brush baked goods with eggs and pretzels with lye (think Fight Club).

We need to talk about steak real quick. Odds are you’re cooking it backward. Many traditional recipes recommend searing the outside of the meat first at a very high temperature and then finishing the meat at a lower temperature to cook the inside. This comes from the idea that searing somehow seals in the juices and flavor. In fact, the exact opposite is true. You lose more juices by searing first as opposed to at the end.

This is my general steak recipe. However, all meat is different, so learn to adjust. Also, buy a meat thermometer.

Ribeye or New York Strip – 1 to 1 ½ inches thick.
Preheat oven to 250°F.
Season steak generously with salt on both sides, place on a rack in the oven over a baking sheet.
Roast for 45 minutes to 1 hour, or until internal temperature is 120°F. Let rest for 5 minutes.
In a very, very hot cast iron pan, sear both sides for 1 minute. Let rest for another 10 minutes.
Send ‘Thank You’ card to 303Magazine (optional).

Try and Fail, and Then Try Again

The important part of cooking is that you keep doing it. Great food comes from trying and failing. Then failing some more. Until finally you fail less. The science and techniques above are a great starting point. These basic interactions correlate to a wide variety of dishes, recipes and applications. But these are not hard and fast rules. They are meant to be tried and experimented with. At the end of the day, I can teach you about brush strokes, but I can’t teach you how to paint.

In addition to his freelance writing and photography work, Justin Barbour is a chef by trade, a professor at Metropolitan State University of Denver and a consultant for small businesses and start-ups in the hospitality industry.