Cirque de Soleil returns to Denver for their 29th city premiere with new show, Toruk–The First Flight on July 21-24. The tour is inspired by James Cameron’s “Avatar,” with the characters, technology, set and even Na’vi language straight from the world of Pandora. Before opening night tomorrow, we got a behind the scenes preview of the set, an inside look at what audiences can expect and some fun facts about the show from with performer and Toruk’s main character Entu, Guillaume Paquin.

About Paquin: Paquin started training in circus arts at age 7 at the Verdun Circus School. “My mom brought me to the gymnastics studio and I was like ‘no that’s not what I want to do.’ I want to create and be artistic about what I’m doing so circus was exactly what I was searching for,” Paquin said. After that he went on to the National Circus School in Montreal, graduating in 2015. He was asked to audition for Cirque de Soleil Toruk seven months before his graduation and began performing with Cirque right away. “It’s a lot to do but I just want to give it, it’s what I want to do, it drives me in life,” he said.

11 Things You Should Know Before Seeing Toruk

1. Scenes are Spoken in Another Language

The performers speak Na’vi. Paul Frommer created the language the Na’vi use in Avatar and helped the performers learn to speak it. They will talk in Na’vi throughout the show. “Because we speak Na’vi [the audience] can for sure relate it to the movie. At the beginning, it was difficult to learn this new language because some people in the world speak it fluently. I can’t say anything I want into the microphone. It’s like learning another language and I want to say it the proper way,” Paquin said. “It’s really a long process, through the three months, but it’s true of the character to speak the language it’s really interesting.”

2. The Show is a Prequel to Avatar

The show follows a story about three characters: Entu, Ralu and Tsyal. They go on a journey to save the tree of soul.

“We go on an adventure to find the five objects to succeed to save the planet so that’s the whole story. It’s not about the movie, it’s another story about the first Toruk Matko [a Na’vi who successfully rides a Toruk.] In the movie, it’s the fifth one. So it’s really interesting to see how [Cirque] is moving backwards from the movie,” Paquin said. He also hinted “Someone’s going to go on the Toruk, drive the Toruk. Someone, I didn’t say who. We don’t know if it’s Tsyal, Ralu or Entu but someone’s going to go on it.”

James Cameron was very involved in the making of the show according to Debbie Fitzgerald of Fitzgerald Peterson Communications.  “It’s set 3,000 years before Avatar so he had to really approve everything and be like ‘yeah that would make sense in my mind,’” said Fitzgerald. Paquin added “Even though he gave a lot of liberty for the show, he really gave a lot of ideas and everything that is there is something he created and he had his eye on it.”

4. Toruk is Distinctly Different From Other Cirque Shows

Because of its storyline, Toruk is unlike other Cirque shows: “It is different in people often expect in the cirque shows, all the twisting and turning and acrobatics, it’s a different type of show. I will say there still is, of course, the acrobatics and all of those as well but it’s not based on the mini segments,” Fitzgerald said.

Also, there are a lot of puppets in Toruk.  Toruk, a great leonopteryx (a Pandora native predatory animal) is a 40-foot puppet, brought to life by puppeteers. The puppeteers will be in all black and this is the first Cirque show to have them.

There are no traditional spotlights. Toruk is the first Cirque show to use tracking. Embedded in the costumes are GPS tracking devices so the light always follows the performers.

“During creation, I tried to run away from it but I never succeeded. The light is always on you and I’m like ‘no no no’. It’s interesting because you always have your light, everywhere I’m going on stage and it follows really well on stage,” Paquin said.

Intermission throws off the performers:  “We do Act 1 then have a 20-minute break. That’s actually a tough thing for us because we’re in it and we have to stop. But people need to get food and buy things. After, we need to be ready,” Paquin said. “The first thing we do is run, go on the pole, run again, run, run and it’s really exhausting. The scene is really intense.”

7. The Scenery is Created with 40 Projectors

You will never see the gray set: There are over 40 projectors bringing the set and Pandora to life.

“It’s a futuristic way of doing the scene. In ten seconds, we’re in another scene. We have this gray stage and it’s just coming alive by projection, it’s really amazing,” Paquin said.

8. It Still Took Longer to Build The Set Than for the Actors to Train

A lot of time goes into the show. The set took a year to build while the performers have a four-month training before the tour. Denver is the 29th city since the tour kicked off in December. 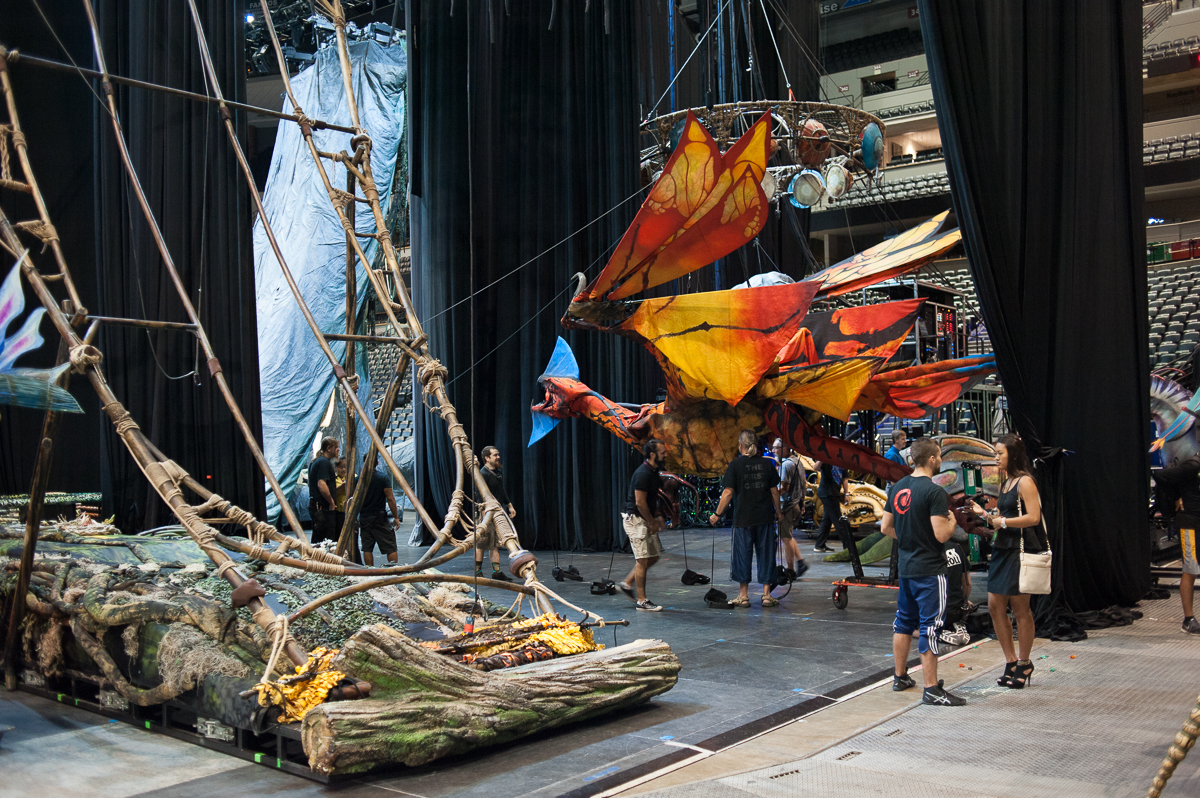 9. Actors Came to Denver a Day Early to Acclimate to the Altitude

Despite working out every day, Paquin explained they were still concerned about the effects of Denver’s high altitude:

“I workout every day to keep in shape. Musculation, flexibility and my speciality is rope but it’s a rope with a loop, it’s my speciality act I do in the show. It’s a lot of cardio for this show, the Na’vi they run a lot but for this huge stage we need a lot of cardio to be strong. Here in Denver because the air is different, we needed to come one day earlier to just train before so we don’t go on stage and become really exhausted.” said Paquin. 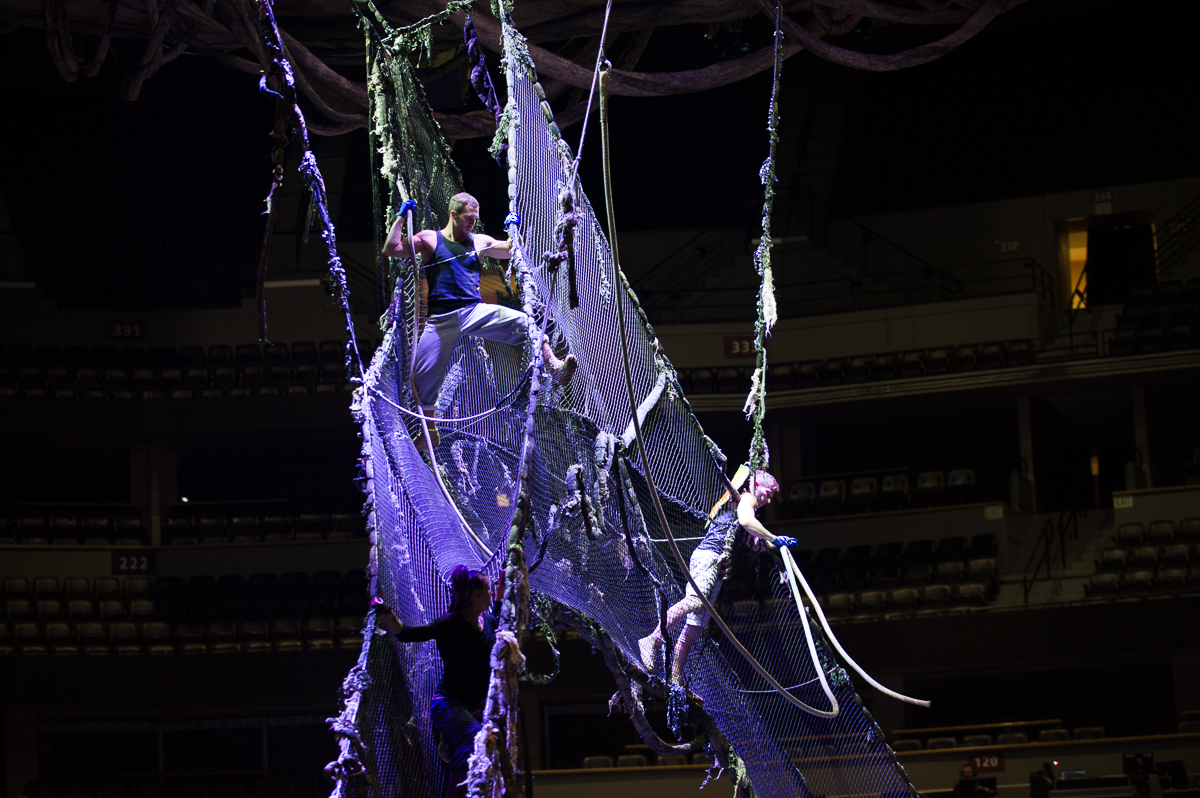 Paquin is the youngest at age 21 while the show’s storyteller celebrated his 65th birthday today. Paquin explained that at first being the youngest was intimidating but overtime he’s grown comfortable with the cast:

Although the storyline is different from Avatar, the overarching theme is similar.

“[It’s] a beautiful show with a lot of emotion and connection. You can really connect with someone, everybody will have a place in their show. They have a connection, a spirituality that is strong. If they saw the movie, they will for sure like the show. Even if they didn’t see it, I think it’s beautiful and an experience,” explained Paquin. 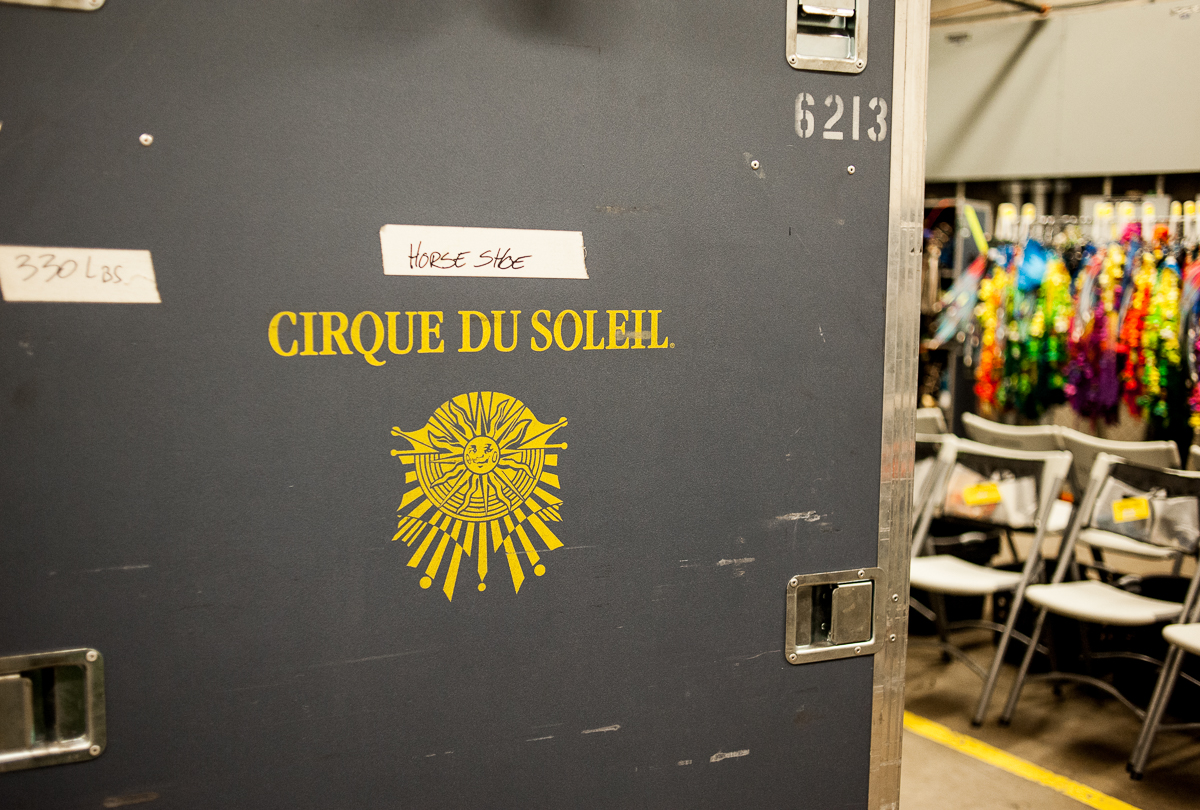