7 New Denver Breweries to Put on Your Radar

It would appear that if any new breweries were to make a home in Denver, they’d have to bunk with the rest of the tap rooms. Alas, through the power of remodeling and repurposing, the metro area alone welcomes at least seven new craft beer houses this summer exceeding the current tally of over 60 breweries. Microbrew demigods smile down on us once again as opening dates are scheduled, banners are cut, and sunburnt brew hounds stream into finished patios. The forecast reads relentless heat and newborn beverage refuges over the next few months. And now, a toast to the next round of competitors—new and coming attractions to Denver’s brewery scene. 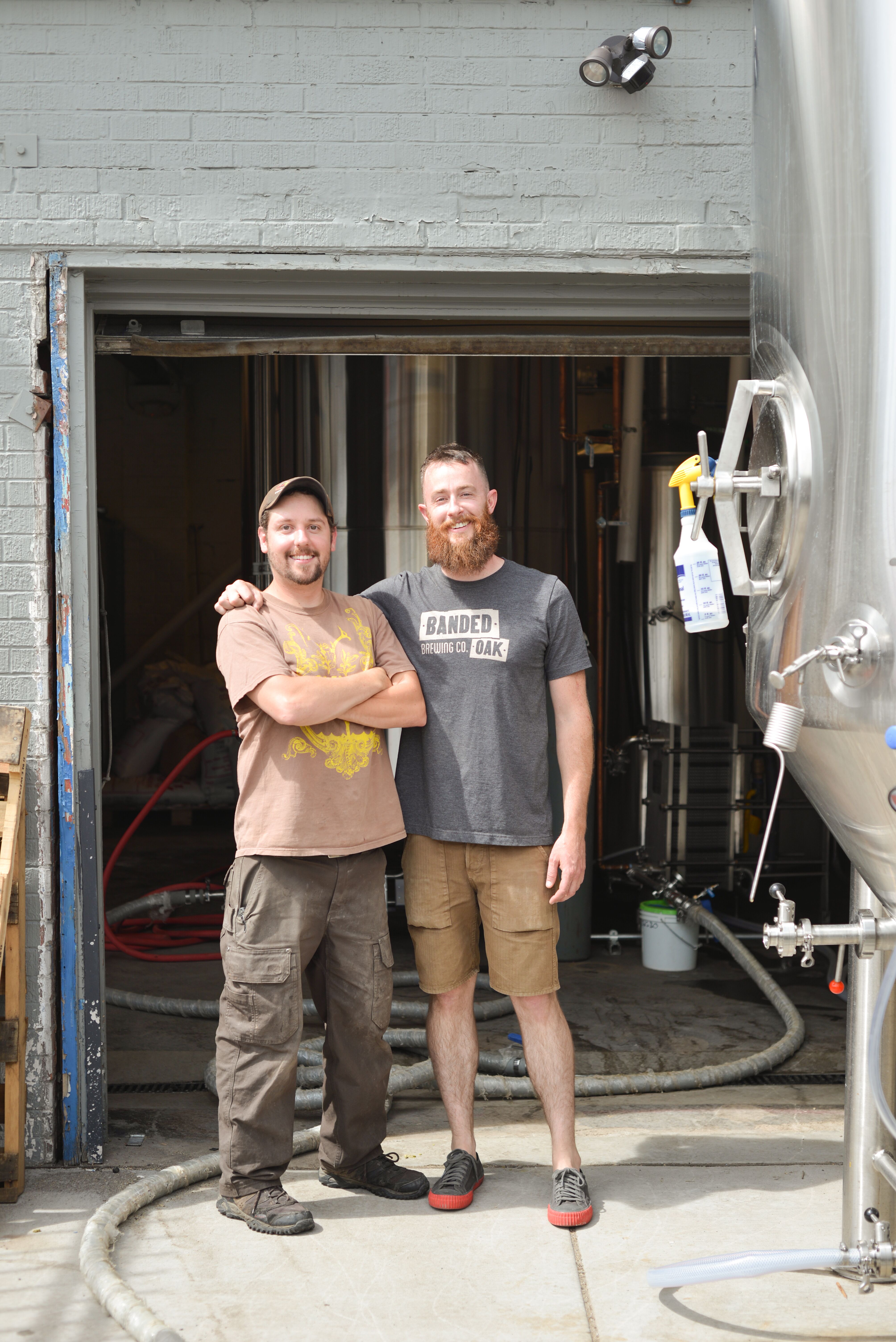 Broadway opened its arms to Banded Oak last month and the embrace has been well-received. Will Curtin and Chris Kirk are the brains behind the operation at Banded Oak, which delves into the world of barrel-aged brewing. Chris has traveled as an international brewery globetrotter for years, educating himself in Sweden and Brazil. He collaborated with Curtin, who was stocked with 20 California Cabernet barrels from a 35-acre vineyard. Thus, the process of barrel aging began.

The first batch of beer aged in these wine casks will highlight the lighter and sweeter accents of their Belgian Blonde and Imperial Rye Saison while the Scotch Ale will channel the darker burgundy notes. While these bold beers are still aging in said barrels for the time being, the brewery currently boasts diverse staples, such as a session Vienna Lager, English style Pale, and Crenshaw Melon IPA. Release date for the barrel-aged brews is slated for Black Friday, when the line will be released in bottles, if all goes as planned. Whiskey barrels are in the forecast for Banded Oak’s, which will keep drinkers toasty with bourbon spiced brews. Their patio is the urbanist’s porch drinking paradise—strung with lights and large enough to fit a herd of buffalo—illuminated by classic beer and a barrel of fun. That’s right, we said it. 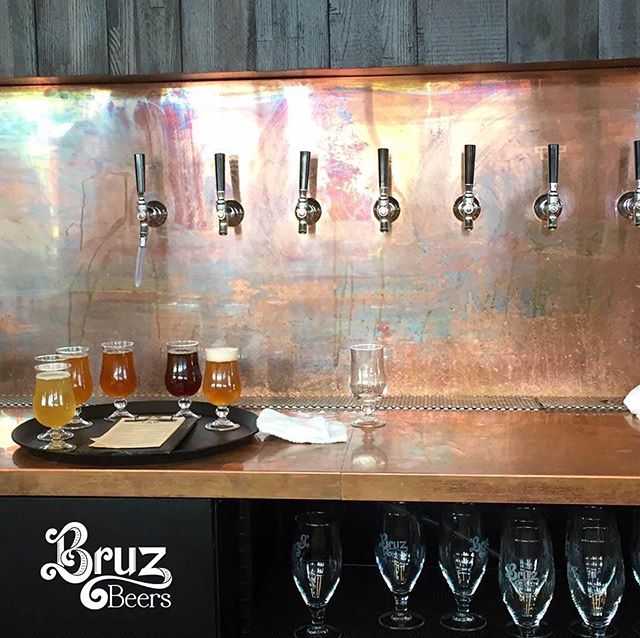 Owner Ryan Evans and brewmaster Charlie Gottenkieny, have quickly attracted the hubbub to their Belgium-centered brewery, following their grand opening in June. Bruz Beers focuses on small batch beers inspired by timeless recipes from the brewing overlords of Europe. Kingpins Evans and Gottenkieny conspired to combine forces back at a Belgian beer tasting in Colorado. They designed their building and brewing techniques with sustainability in mind, dispensing their spent grain to local farmers. 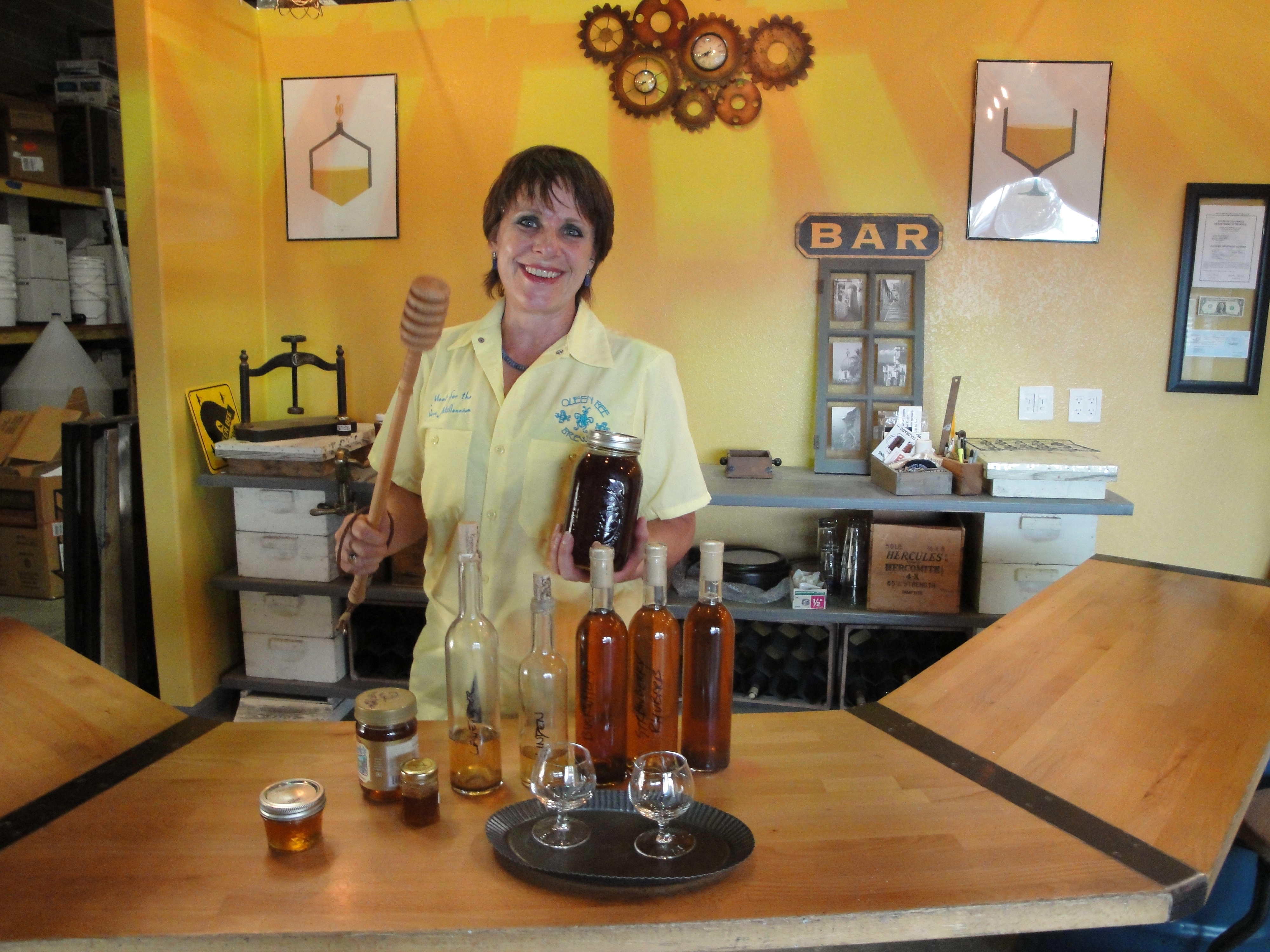 When: End of July/Early August

Raise your goblets of praise high—the Denver metro area will house a meadery at long last. For all you novices out there, mead is brewed with honey, water and yeast—simple and delicious. Beginning with local honey, Queen Bee serves as a remarkable immune defense, thanks to local Colorado bees who star in the beverages. Once used as medicine, the Metheglin mead recipe is a staple at Queen Bee, peppered with flower and spice notes. Owner Deborah Lee praises the Meadowfoam Blossom Traditional style mead which, “tastes like roasted marshmallows.” She brews mead because of the dramatic organic variability of different honeys, which can profoundly shift the aroma and flavor profile of her drinks. Queen Bee Brews will unveil six meads on tap, maxing out the storage capabilities of her homebrew fridge. She’ll bottle her mead as well and begin selling it in Colorado. We hope her mead remains in Denver’s humble abode. 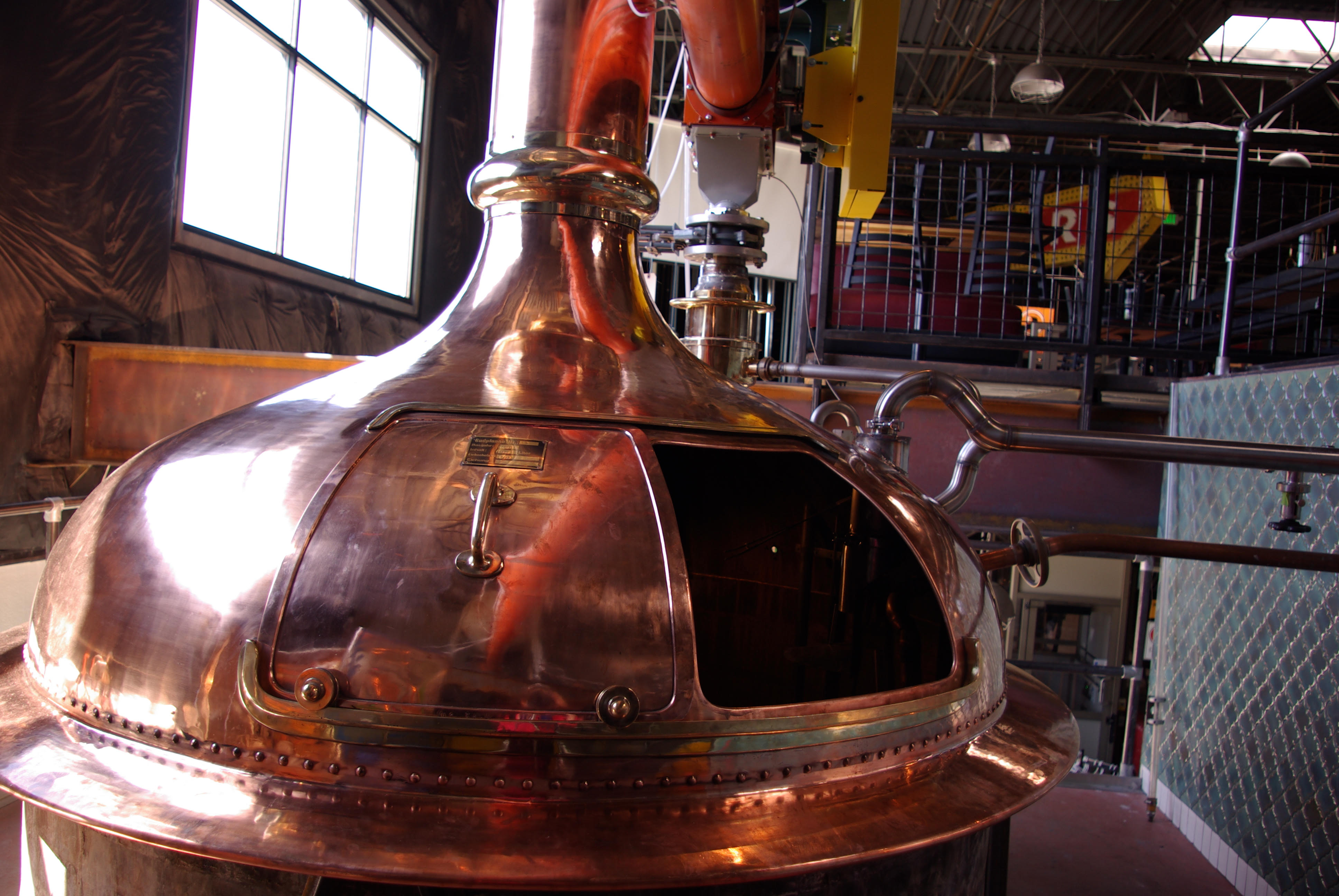 After brewery hopping for years, Ashleigh Carter and Bill Eye the lager guy are making waves and authentic German beer in their own establishment. Their lager is refined and perfected through antique practices and contraptions like their kupferne sudfanne—a copper brewhouse. This bell-shaped behemoth survived World War II in Ammerndorf with hardly a bump or scratch. Fluent in German, Betty Wang of CAUTION Brewing facilitated the transaction and translation after Ashleigh and Bill bet every penny on the brewhouse at an auction. “That was basically proving to investors that we were damn serious about this,” Carter said.

The Lagerhaus shares a space with C Squared Cider at the Rackhouse Pub conglomerate, offering a cross-pollinating location. “This way we don’t have to brew a gluten-free beer,” Carter said. They’ve brewed a helles, pilsner and dunkel, poised for months while awaiting the grand opening. Carter warns that “making lager walks a fine line between bland and sublime,” though they’ve led us to believe their batches lean toward the latter. Although these beverages require serious precision and detail, nobody in the building will be wearing a straight face after 5 o’clock on August 13. Tip your stein back and let the good times roll in RiNo. 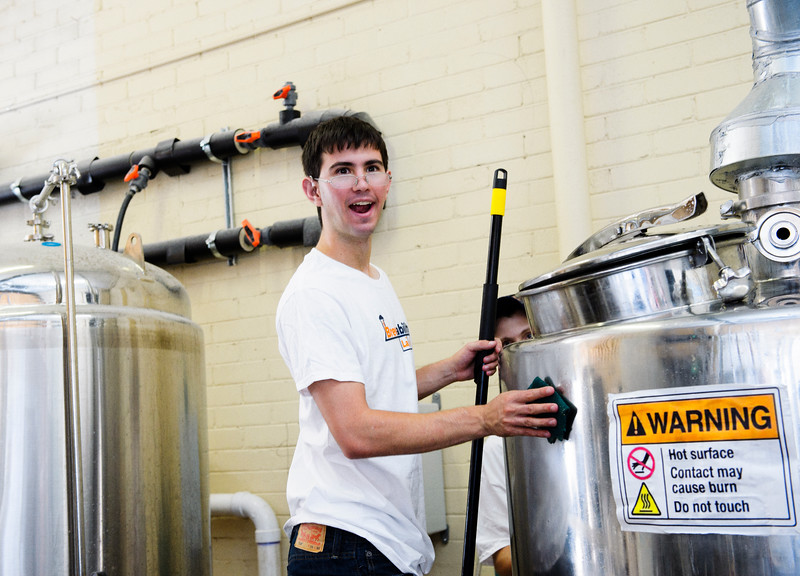 Tiffany Fixter planted a Kickstarter for the Brewability Lab last October and less than a month later, she had reached her goal. Brewability provides a systematic training and employment program for adults with developmental disabilities—20 percent of which are currently without a job. Brewability aims to pour eight beers and “each beer will be color coded with a different style of beer,” said Fixter. Toby Gerard is head brewer stirring great ingredients into each batch of beer. You can expect a West Coast Pale Ale called the Hyphy Wifey with new school hops like wiamea and nelson sauvin which draw out a tropical and bright taste. The Nicholas Sage is their farmhouse ale with sage and rosemary emerging from the rich malt body. The time and effort dedicated to a project like this was immense, but the Lab has nearly finalized all licensing and polishing of their tap room. We take our hats off to this company and look forward to enjoying a beer with everybody who made it happen.

Three Oregon brothers are cracking kegs and breaking a leg in Jefferson Park with ingenuity and creativity. Quoting fellow brewmaster Garrett Oliver of Brooklyn Brewery, Kent Dawson agrees that a career in craft beer “is a story of a diverted life plan.”

The beer list and food menu are meant to interact, as each plate pairs with a network of brews and vice versa. One surefire liaison lies between the smoked lamb steak and their saison called Joyce. Dawson relayed their mission to focus on the food just as much as the beer. The prices will be very approachable, even though Briar Common is designed for a true dining experience. The Dawson’s have worked on the project for three years, recently renovating an old storefront to functioning capacity this spring. Serving as a grocery store for the better part of the early 1900’s, the iconic corner-shop bears the brick and mortar of historic Denver. Their eponymous beer is an American Pale Ale that resembles Denver honey sunshine in color and drinks in the same light. 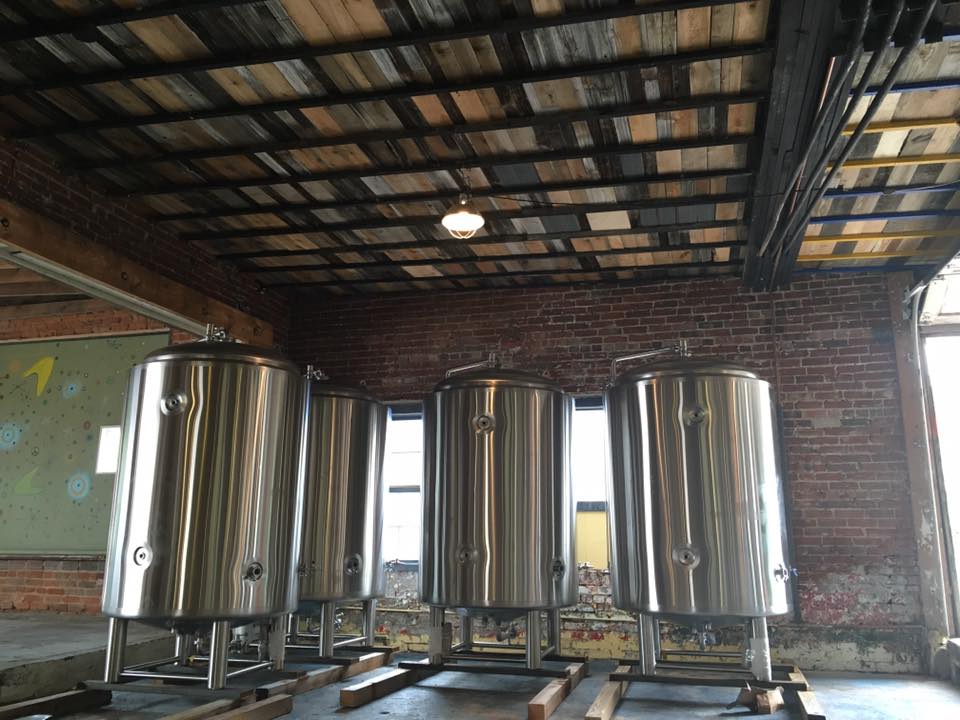 Barring anymore unforeseen kinks, the Grateful Gnome will be doling out sandwiches and beer in October. Harmonizing two of God’s finest gifts—beer and sandwiches—Dan Appell draws from his home of New Jersey deli’s and his craft beer habit under the roof of his establishment. The sandwiches will be numbered zero to 50. The draft list will consist of 15 beers showcasing styles from around the globe, including a non-alcoholic root beer also made on the premises.

Developing a penchant for jam bands in the ‘90s, Dan plans to herd in live acts around Denver and spin tunes. Revisiting his glory days at West Virginia University, he’s reserving the Gnome as a refuge for the Rocky Mountain Alumni Chapter. “Our 425 alumni in Colorado will congregate for football and basketball games as we always have since our days in Morgantown,” says Appell. Although Dan himself has experience at Wynkoop Brewing Company and Upslope Brewing Company, his head brewer is yet to be announced because he is gainfully employed at the moment. “He will come out of the closet when ready and I’ll be standing there with open arms,” Dan cheers.