Tyler HarveyJune 27, 2016Music
All photography by Austin Voldseth
Home
303 Magazine
11 min read
Westword Music Showcase took over the Golden Triangle as well as several local bars and venues in a day-long extravaganza of music and sunshine. The day began with a steady growing crowd around the Coors Light Stage and Mike’s Hard Lemonade Stage inside of the the festival grounds. Others meandered through Club Vinyl, Bar Standard and other locales where hundreds of local artists performed throughout the day. By the festival’s end, everyone came together and danced the night away with Dillon Francis. At that point it was an unspoken fact that we had grown from a gathering crowd into a full-fledged community. 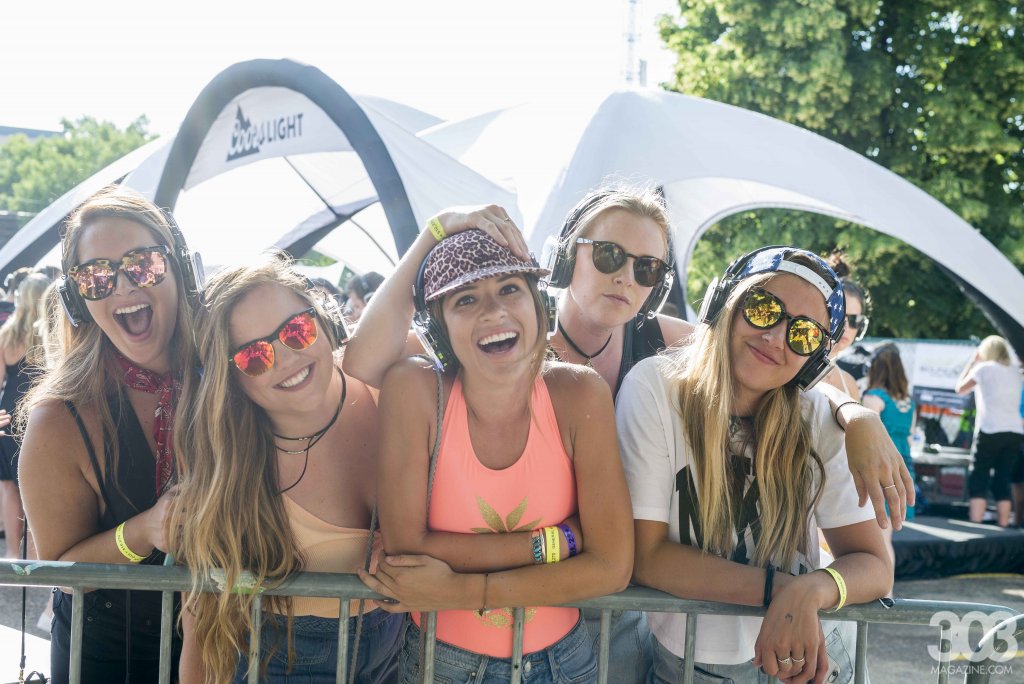 The Westword Music Showcase had a variety of vendors from beef jerky to cigars and there was quite a lot of free swag making its way around. The closed-off venue area was spacious and easily navigable but unfortunately didn’t have much shade which was especially unfortunate on a steaming-hot day with occasional downpours. When the rain did come many vendors were kind enough to house festival-goers under their merch tents while the rest of us crowded under a treeline and laughed about it together.
My day began with Denver locals 888–it was early and the sun was beaming down, yet quite a crowd had already formed for the electro-punk band. It was really great to see so many people supporting their local artists. Not only did 888 have a decent crowd, there were lines constantly flowing into Bar Standard and Club Vinyl (where local artists played) throughout the day.

At points, 888 Reminded me of The Used meets Tears for Fears with heavy percussions, fun synths and catchy piano chords. They performed a new song called “Gold”–a wonderful blend of electronic sounds and drum beats. 888 concluded their show with the singer drumming alongside the drummer in an intense rhythmic showcase. Having been my first time seeing 888, I was very impressed and am already looking forward to their next show. By the end, I could tell the crowd felt the same.

“Denver rocks. The altitude is a little heavy. We live below sea level in Holland.” – Chef’s Special

Afterwards nearly the entire crowd migrated over to the Coors Light Stage for Chef’s Special. If you’re unfamiliar with the Netherland group, you’ll know of them very soon–especially for those of you seeing Twenty one Pilots this summer because Chef’s Special is touring as their opener. After some unfortunate technical difficulties, the band took the stage, the five-piece easily carried the energy over from 888 with another passionate and energetic day performance.
The best way to describe Chef’s Special is a combination of rap and reggae beats mixed with a jammy-guitar–or Twenty One Pilots’ twin brother. At one point the guitarist continued on for quite some time with a talented, smooth, sexy and ambient guitar solo. The singer came to stand on top of the fence separating VIP and GA at one point causing the crowd to jump and jam for a great dance session in the sun. It didn’t stop there – singer stayed there for three songs. Chef’s Special concluded with their radio-hit “In Your Arms.” Get excited, Twenty One Pilots fans and be sure not to skip the opener because Chef’s Special is quite fun and appropriately similar to the popular Blurryface duo.
At this point, the crowd had already felt so many emotions together–sentimentality, joy and passion. It only got better when Grizfolk took the stage. They had the crowd coming together in unison with a variety of chants and claps in the largest crowd-gathering performance yet at the Westword Music Showcase.
The band then surprised us with a brilliant rock-rendition of Kendrick Lamar’s “Money Trees.”
As Grizfolk wrapped up their performance, the Coors Light Stage was being taken over by Austin, Texas’ incredible Black Pistol Fire. You know those shows you attend where you aren’t familiar with the artist but their live performance instantly commits you to fandom? This was Black Pistol Fire for me. The singer–incredibly talented–somehow never ran out of breath with his fast-talking rhymes all while playing intense guitar riffs.

“Black Pistol Fire was hands-down the most talented group to perform at Westword Music Showcase this year.” 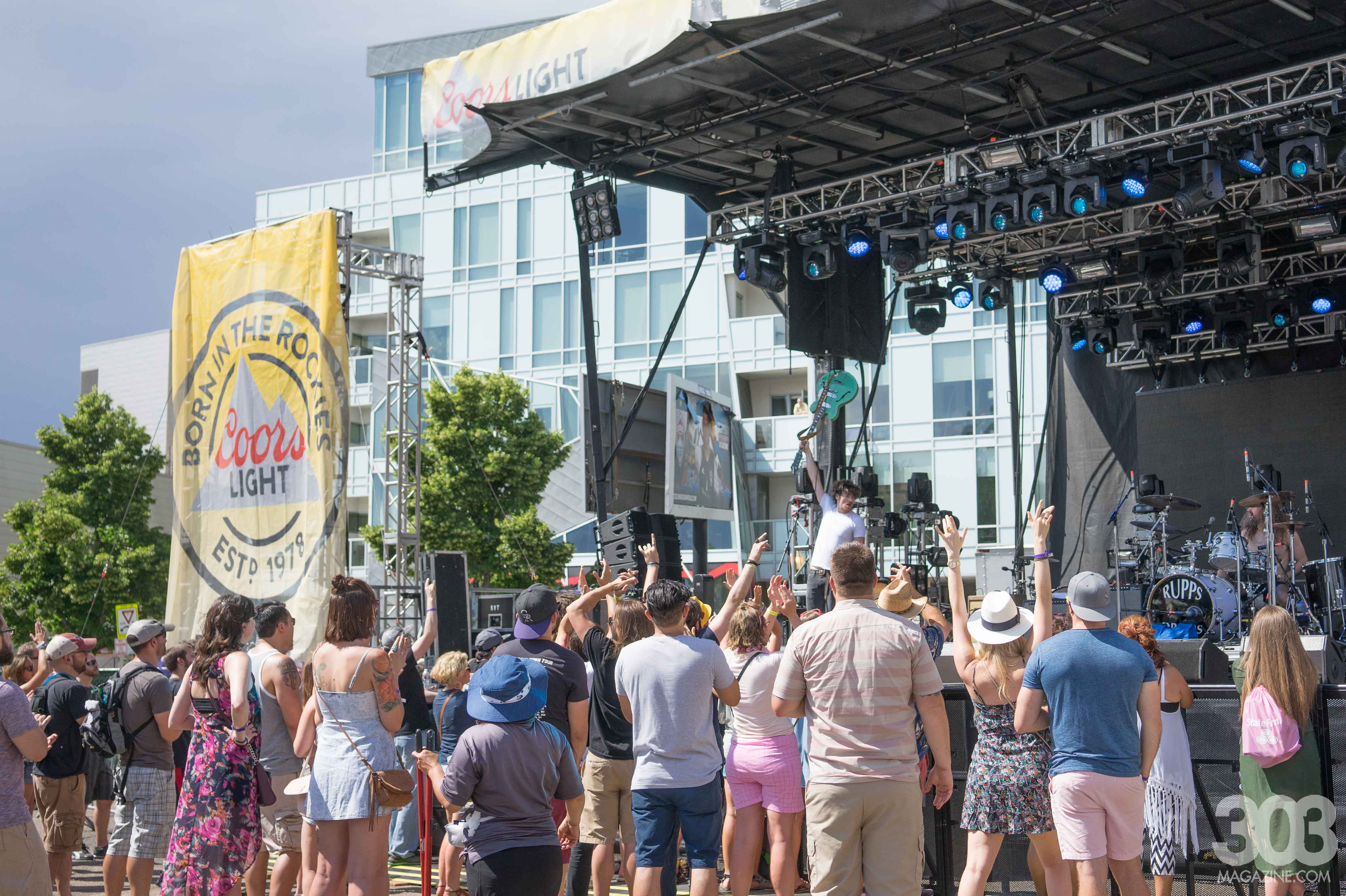 It’s amazing to see just two performers-the frontman and the drummer-making such great music and making great use of the stage while doing so–jumping off the drum-set and headbanging. At times, the music would cut out and the singer would start flailing his arms while preaching impeccable vocals. This was southern-rock at its best–soul, blues and epic guitar and drum collaborations. I won’t lie, the buildup during some of the guitar solos nearly had me in tears. Black Pistol Fire was hands-down the most talented group to perform at Westword Music Showcase this year. 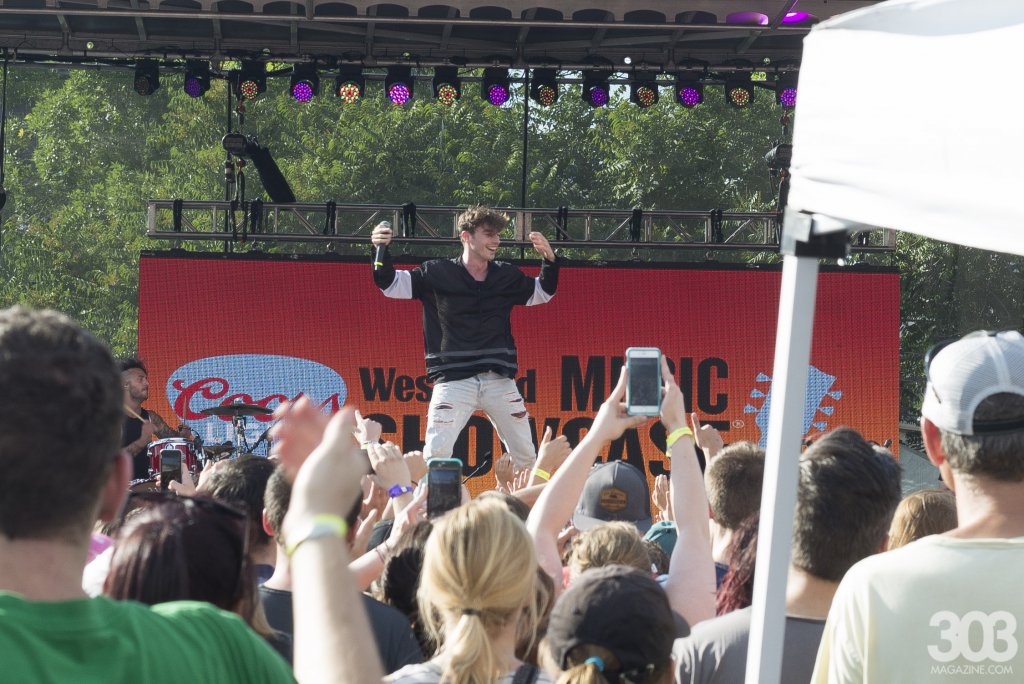 Brooklyn band New Politics emerged with an energetic but dull performance for those that had been watching live music all day. The singer stayed busy with handstands, getting the crowd to wave their arms  and mediocre breakdancing–but hey, they were trying hard I’ll give them that. New Politics relied too heavily on crowd involvement but lucky for them they came to a great place at a great time–when everyone was coming together and feeling the good vibes.

“[Matt & Kim] opened by announcing that the last time they performed in Denver Matt went so “H.A.M.” he broke a bone.” 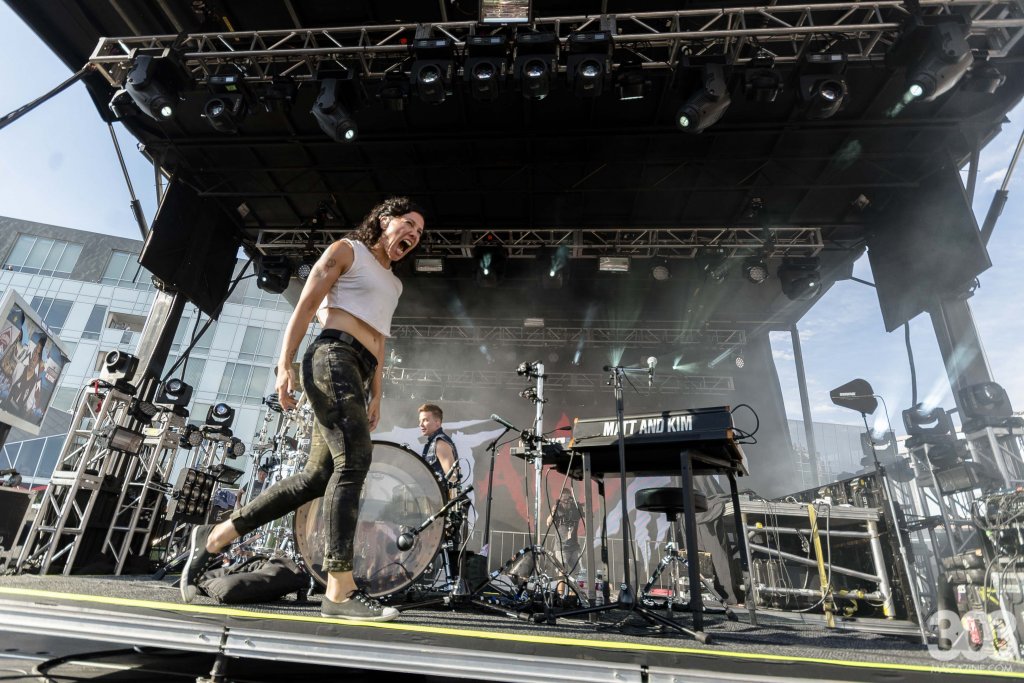 The daylight returned to the Coors Light Stage (figuratively and literally) just in time for legendary duo Matt & Kim. Kim cheers’ed the crowd as she sat-down at her drums–ironically with a Budweiser. They opened by announcing that the last time they performed in Denver Matt went so “H.A.M” he broke a bone. As the music began they encouraged everyone to be that asshole and push to the front.
This was by far the most energetic performance I have ever seen in my lifetime. Matt & Kim played their songs while mixing hip-hop hits such as DMX’s “Up in Here” in-between their originals. It grew harder and harder to look away from their excitement and passion–and occasional raunchiness. Kim would twerk when she wasn’t raging behind the drums (seriously–you could catch her screaming at points). During “Block After Block” she furiously slapped her ass and twerked (quite well, I should mention). 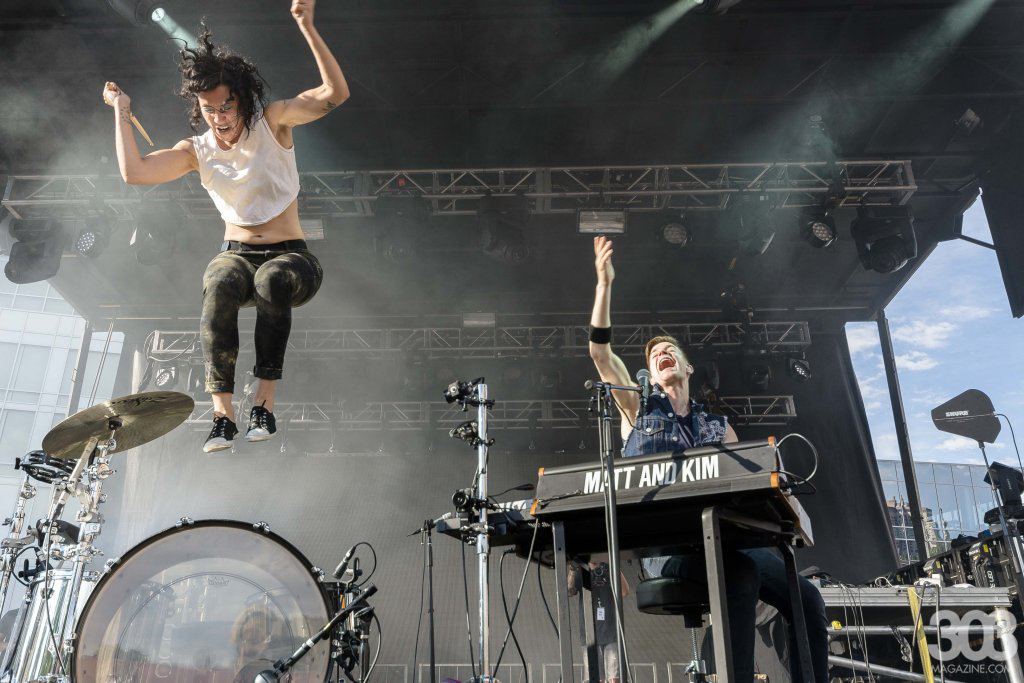 The duo reminded me of radio show talk hosts when they conversed between songs–cracking hilarious jokes and playing off one-another’s words. Kim rubbed a beach ball between her legs before throwing it into the audience while Matt inspired the crowd to bounce from the “crotch-ul region.” Then they scattered in the wind, bags of non-inflated balloons for the crowd to blow up themselves–and they did. Matt & Kim covered “Umbrella” by Rihanna in an acoustic sing-along before quickly moving on to “All I Do is Win” by DJ Khaled. 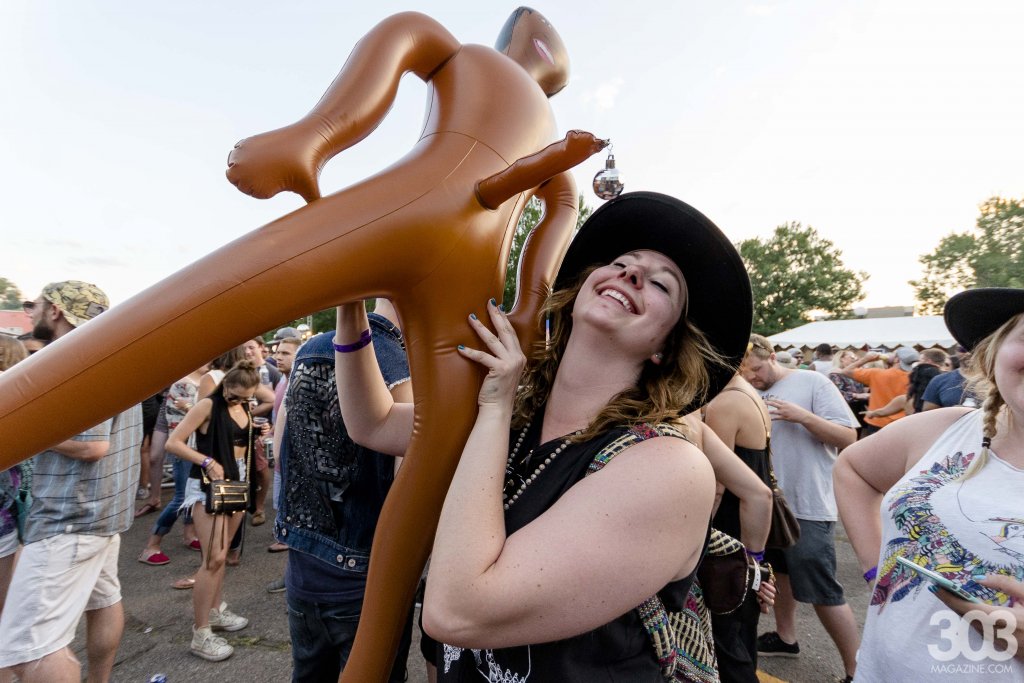 Kim stated that she had a surprise for everyone, walked off stage and returned swinging a giant black dildo above her head. Then Matt brought out friends of his own–a slew of sex dolls that were catapulted into the crowd (interracial, some very erect and some with funny masks). Kim walked on the crowds hands, they released two giant ten-foot-wide beach balls onto the crowd and then tore off their shirts and encouraged the crowd to do the same. The best way to describe Matt & Kim’s set? Pure insanity. By the shows’ end, there was nothing that I wanted more than to be their best friend. As if joining the crowd, one of the ten-foot-wide beach balls from Matt & Kim migrated with everyone to Cold War Kids. Each one of the members of this alt-rock group owned the stage and sounded great, performing for over an hour and including hits like “First” and the catchy “Hospital Beds.” Though I’ve been a Cold War Kids fan for quite some time and excited to see them live, there was nothing that exceptional about this particular performance. The band translated their songs live very fluidly and carried much energy, but nothing about this set really stuck out to me. 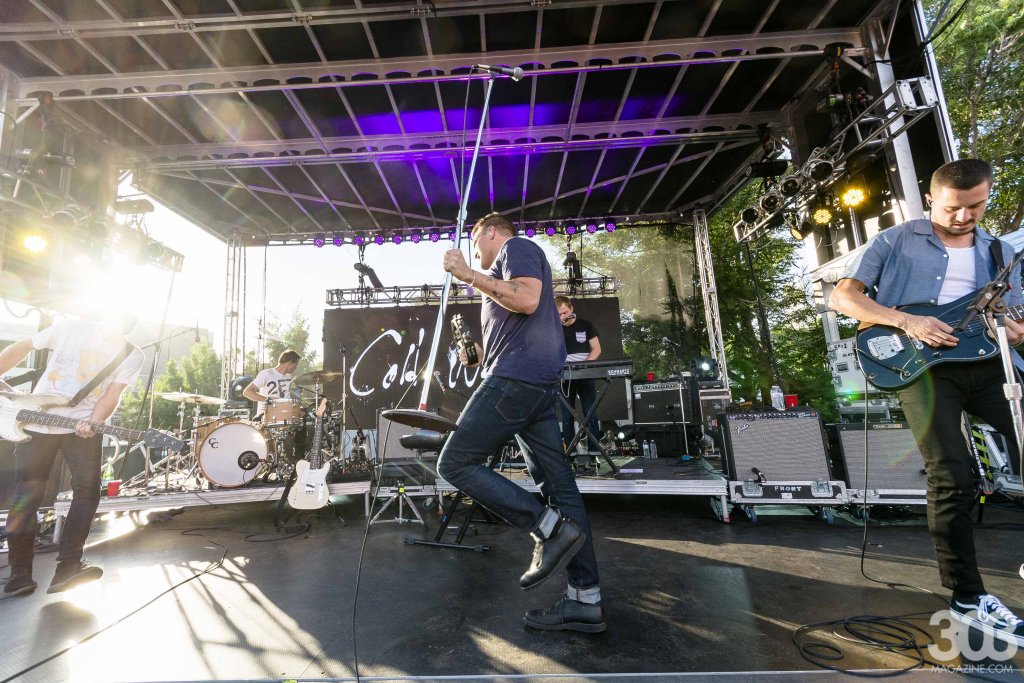 Slowly the crowd faded out and moved over to the concluding show–Dillon Francis. He lit up the Coors Light Stage right on cue and the Golden Triangle exploded with electronic sounds. Mixing in up-and-comers like Galantis as well as classics like Chromeo, it was a great blend of the old and new. The audience became more-and-more packed as the show went on but it certainly didn’t slow anyone down. At this point I was dancing with everyone around me and cheersing anyone who made eye-contact. As the sun set the feeling of nostalgia began to sink in–that same feeling you get at the end of any great music festival. 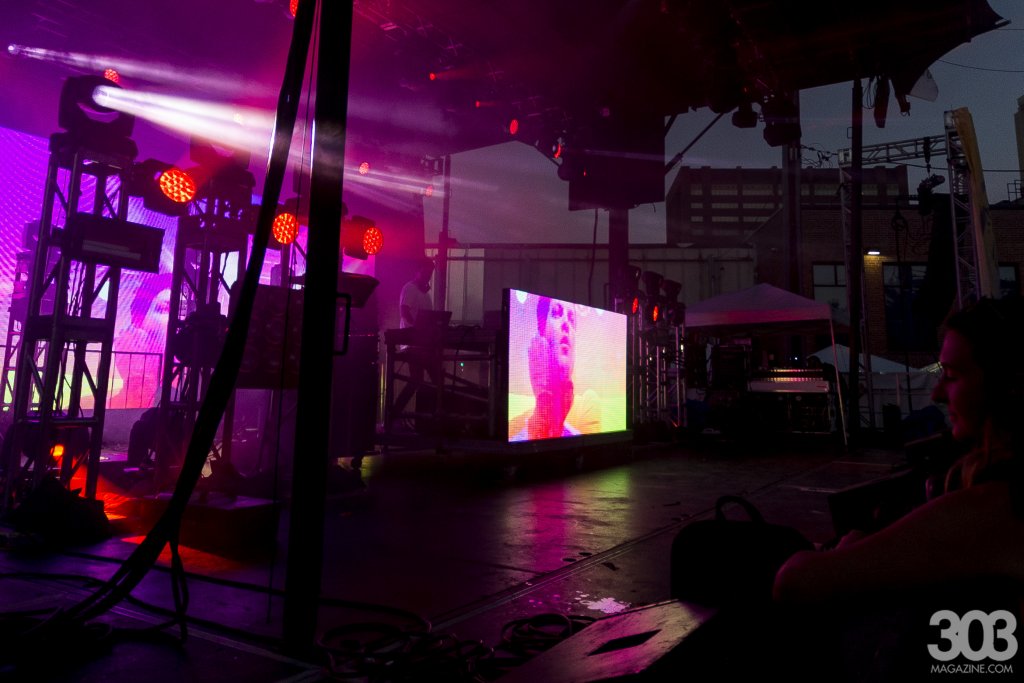 Westword Music Festival had its faults just like any other festival but all-in-all it was a wonderful experience. The single best thing was the sense of community felt throughout and seeing so many diverse Denver people all in one place drinking together, dancing together and admiring some great music together. By the time I departed the festival grounds and started walking back to my car, I found myself gleefully smiling at strangers in passing, feeling proud to be a resident of this great city.

Photography by Austin Voldseth and Brittany Werges. Check out our full galleries here and here.