Colorado’s own family-owned and operated renaissance festival celebrates its 40th anniversary this summer with a record nine weekends of shenanigans between June 11 and August 7.

The festival is held at a 35-acre site on a Larkspur mountain, adorned with permanent 16th-century-styled structures. Adult tickets cost $22, while children are $10 or free for ages five and under.

Family-friendly, but opting for more of a Game of Thrones vibe than that of a Shakespearean history play, marketing director Jim Paradise dubbed the Colorado Renaissance Festival a “fantasy kingdom.”

“It’s just so different than the modern day theme park … it’s a little edgy,” said Paradise, whose father Jim Paradise, Sr. founded the festival in 1976. “It’s a good way to get away from your regular existence and see things in a different, fun way.”

From jousts and panthers to comedic nuns and themed weddings, there is more than one way to lose yourself at the 2016 Colorado Renaissance Festival.

Be There for the Welcome Canon

Festival events stretch from 10 a.m. to 6:30 p.m. each day, and Paradise said he expects well over 200,000 patrons to visit over the festival’s 18 days. To get the most of your experience, arrive before the gates open around 9:30 a.m. to hear Good King Henry – portrayed for 12 years by the festival’s casting director John Bryan – introduce the day’s performers, deliver a comedy sketch and, at 9:59 a.m., yell “fire the cannon!” An obliging cannon blast will kick off the day’s festivities.

If you stick around the whole day, you’ll hear a second cannon closing down the park — an appropriately grandiose way to bookend a day at the fair. 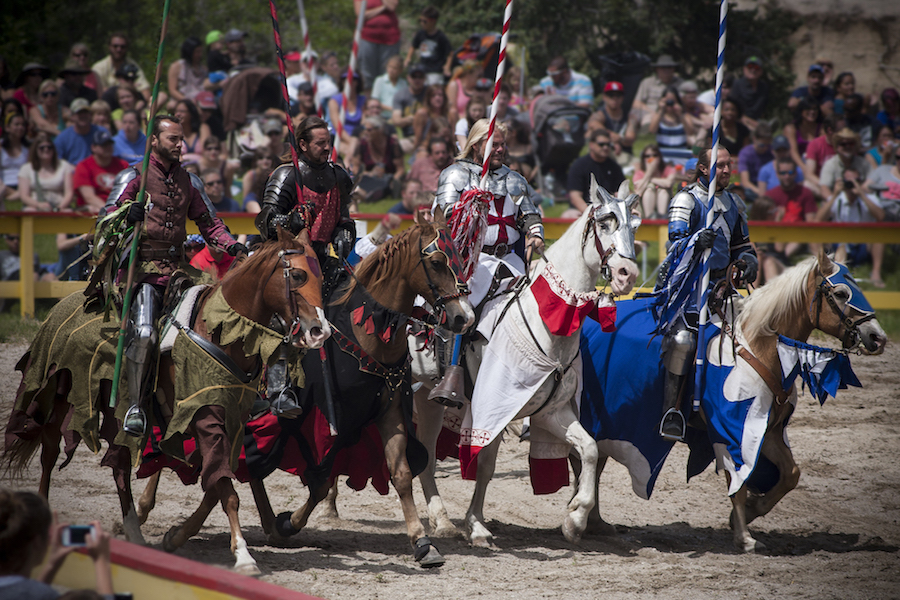 Knights of the Noble Cause Joust photo by Clint Mansfield

Of all his duties as Good King Henry – including presiding over almost every major festival event, and eating meals of medieval delicacies at a king’s table – John Bryan said his favorite is getting to knight young patrons.

“It’s a very solemn ceremony,” Bryan said. “The children will be kneeling in front of me, but about one out of every 20 will look up at me, and the belief in their eyes is incredible. It’s real to them and it becomes real to me.”

While Bryan said kids make up the majority of participants in the weekly knighting ceremonies, he has given the title to people as old as 80. Both children and “children at heart” are welcome to join the cavalry. 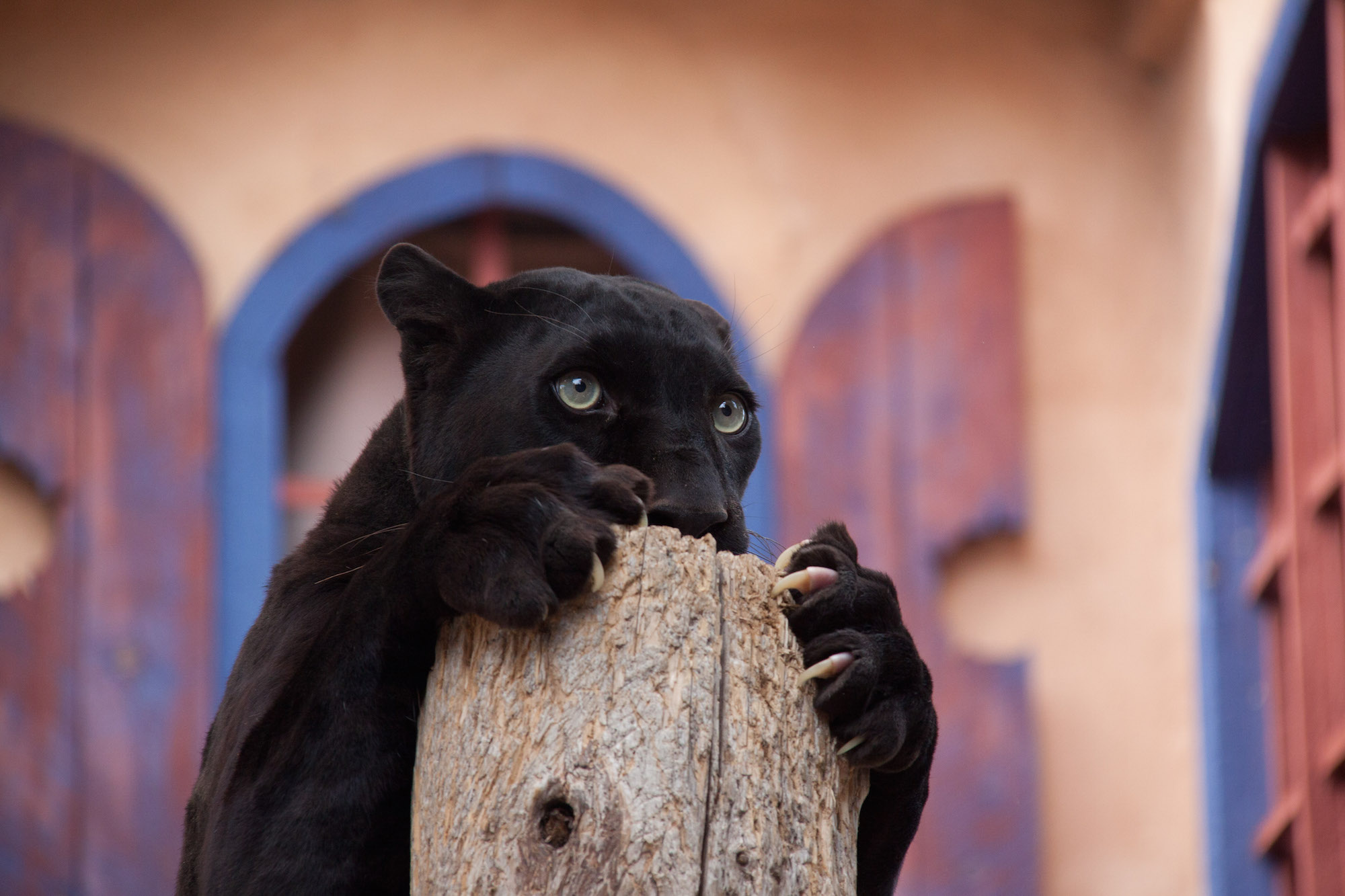 A bit edgier than a petting zoo, the Endangered Cat Show will feature black panthers, amur leopards, caracals, lynx and more in their natural glory. The Great Cats World Park and Center for Endangered Cats will direct the event, designed to give an up-close look at their wild felines while bringing awareness to endangered animals.

Keep an eye out for elephants as well — they are known to make an appearance at the Colorado Renaissance Festival.

For the festival’s ruby anniversary, organizers decided to welcome back three popular performers from throughout the program’s history, each with decades of experience at renaissance festivals nationwide — and each bearing a decidedly vaudevillian bend.

These acts include Ded Bob, a libertine skeleton engineered by a masked ventriloquist; Hey Nunnie Nunnie, two musical comedians who dress like nuns but act like anything but; and Puke and Snot, a pair of funny guys with puffy shirts, tights and a self-deprecating humor.

In addition to these festival veterans, Jim Paradise said he was excited the all-female comedy troupe Washing Well Wenches, an annual favorite, are returning.

Celebrate Romance- or Get Married 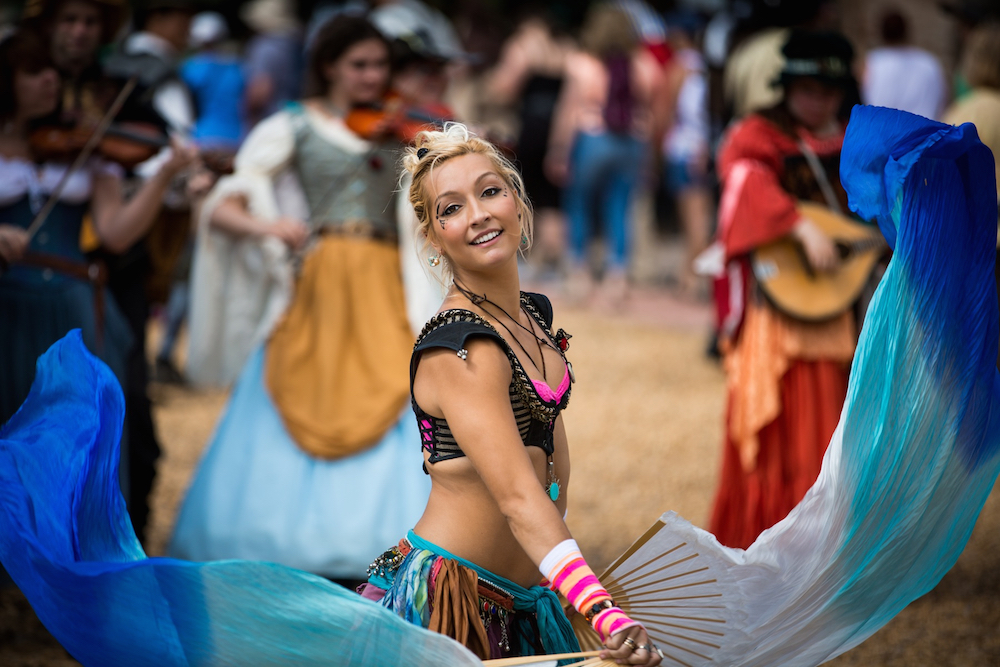 The Colorado Renaissance Festival has long played host to weddings, providing an unconventional outdoor venue for the adventurously affianced. This year, 14 couples are scheduled to tie the knot in private ceremonies over the festival’s 18 days. One wedding will be sponsored by Colorado Springs radio station 94.3 KILO, continuing 30 years of renaissance wedding giveaways.

While it’s too late to book your own medieval nuptials this summer, couples are encouraged to participate in a “Renewal of Vows” ceremony, taking place July 16 and 17 during the Love and Romance themed weekend. The festivals’ king and queen preside over the sacred service, and provide each pair of lovers with a rose and blessing. 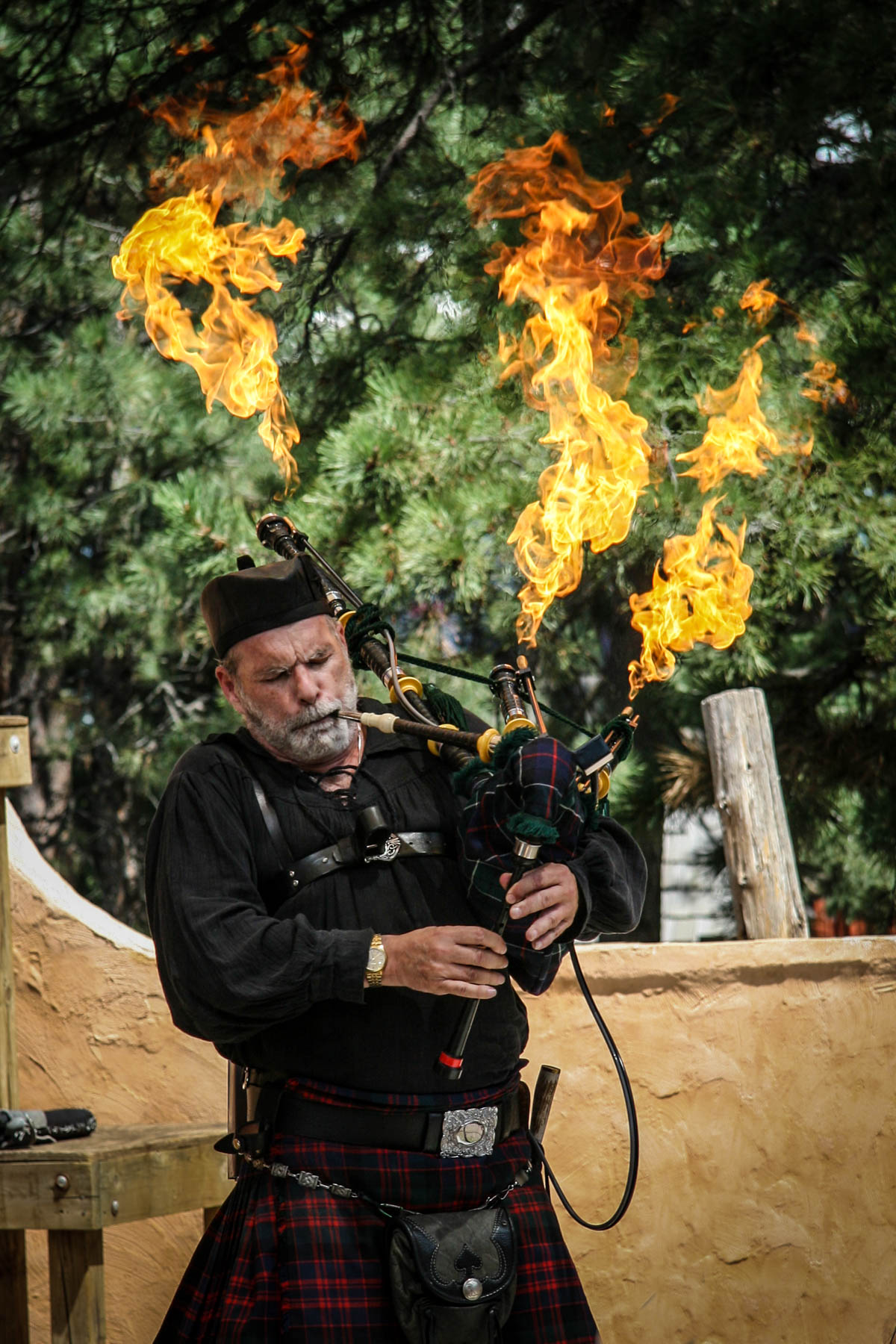 Ten performance stages are spread out along the festival’s 35 acres, but Jim Paradise said the largest stage is the festival itself. Walking from any one point to another, you’re bound to encounter King Arthur, the Three Musketeers, Twig the Fairy (an award-winning festival act armed with a double-piped flute and fairy dust), or even Captain Jack Sparrow come the first-annual Pirate Invasion Weekend July 23 and 24.

While the festival’s cast includes a mishmash of real and fictional characters from myriad eras, casting director John Bryan said there is order to the chaos. Historians are hired to help actors understand their character inspirations and their respective time periods, and if you ask a cast member about modern conveniences such as airplanes or cell phones, they will almost certainly call you crazy.

“I don’t want mannequins in velvet, I want real people,” Bryan said. “We have a really strong storyline together and are constantly out engaging patrons in [our] interactions.”

While Bryan said children are often the most entranced, he said about 90 percent of adults end up believing, in some sense and at some point, that they have really entered another world.

Many will even troll the streets in costume alongside the cast, whether as knights and princesses or even Star Wars Storm Troopers. Paradise said about one in 10 patrons participate as “playtrons,” a term the cast lovingly uses to refer to costumed visitors.

Get Your Wine On

Your creative angst may be sated at more than 200 arts and crafts vendors during the festival, but one of Colorado Renaissance’s most popular crafts has a weekend of its own. The Legendary Grape Stomp Competition will take place July 9 and 10, during the Wine Revelry themed weekend, awarding prizes to winning stompers. Free wine samples may be enjoyed at the Dancing Bear Pub from 11:30 a.m. to 2 p.m.

If wine isn’t your style, come during the second weekend (June 18 and 19) for the Royal Ale and Art Festival. Like the wine, free ale sampling will be held at the Dancing Bear.

Find Your Hero at The Joust 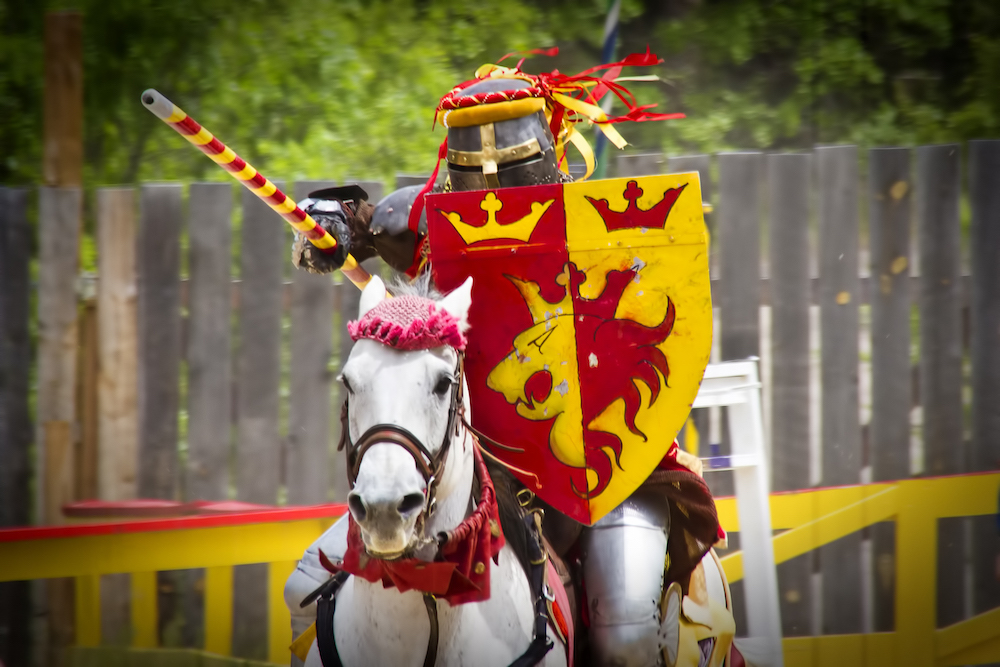 Jousts are a quintessential Renaissance festival element, based on a sporting tradition in which royals, knights and commoners gather for one high-stakes tournament.

The joust is one of the few historical reenactments of the Colorado Renaissance Festival, but 30-year jouster Bryan Beard said the performance falls “somewhere between history and Hollywood.”

“With [television and films], the audience has gotten more sophisticated and know what to look for,” said Beard, who performs as white knight Sir William the Lord of White Hall. “We don’t have special effects so we have to always bring our A game – we have to get it on the first try.”

To achieve this mix of accuracy and theatricality, Beard’s trope of about 20 jousters – called Noble Cause Productions – practice horseback riding skills, combat stunts and acting five days a week, in addition to constructing their own props and costumes.

Noble Cause’s performance is broken into three parts: a more light-hearted, equestrian-focused opening act; the joust itself, during which the resident “bad guys” cheat their way to the top; and finally the last trial by combat, in which, Beard said, “the most righteous will prevail.”

At the end of the show, patrons are welcome to take pictures with their heroes and a few lucky kids may receive a wooden sword signed by the cast, or be dubbed the Queen of Love and Beauty, complete with a flower garland, as is jousting tradition.