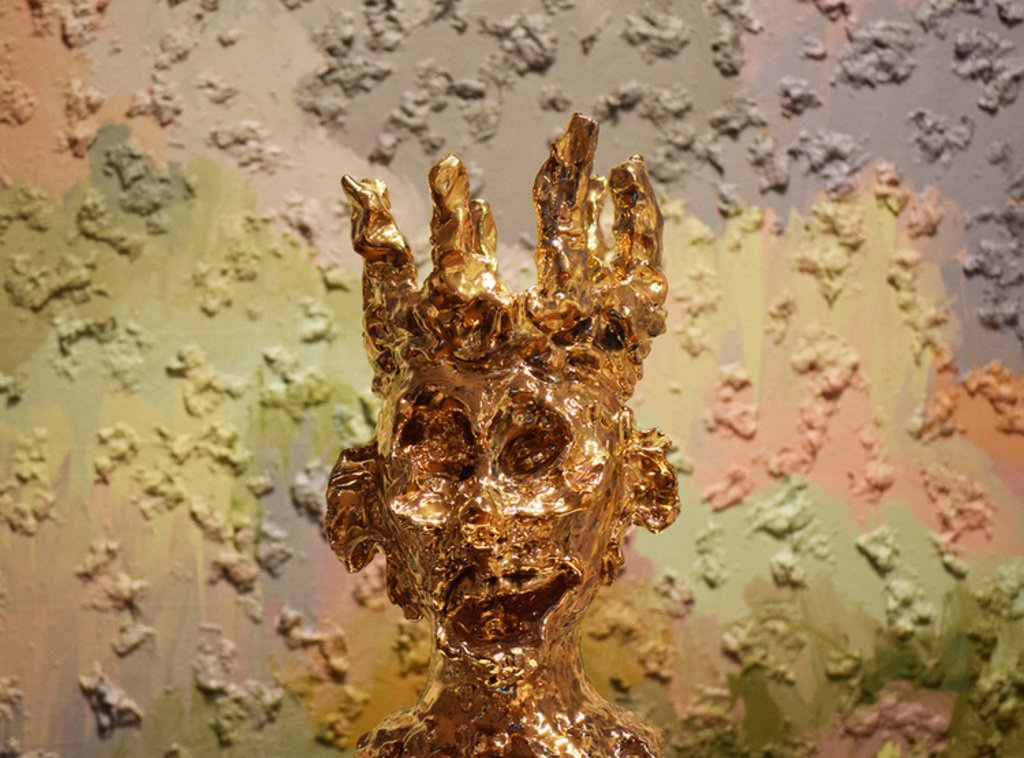 Though the term “selfies” is new to our lexicon, the idea of presenting the best image of ourselves originated with the Greeks in the High Classical Period, where depictions of men became formulaic in their perfection.

But those statues did not represent reality, just as much as photoshopping can hide reality from today’s portraits.  As time wore on certain sculptors and artists, like Giovanni Bernini and Francis Bacon dared to portray a more genuine subject which expressed emotion and movement and—heaven forbid!—even flaws.

Denver artist Matthew Harris is on a quest to uncover some of those flaws with meticulously sculpted and grotesque statue heads which seduce the eye from a distance and repulse it from up close. In doing so, he hopes that viewers of his work may rethink how they deal with the reality of imperfection.

Harris’ summer exhibition, titled Baroque Selfies—July 30—August 27 at Leon Gallery— is all about tackling issues that are more than skin–deep, ironically by distorting the facial features of his sculpted heads. The loose, gestural effect he produces with clay and plaster presents objects which seem alive and frightening, filled with the movement and vulnerability of their emotions. Read on to learn more about the artist, his process and the reasoning behind his most recent work. 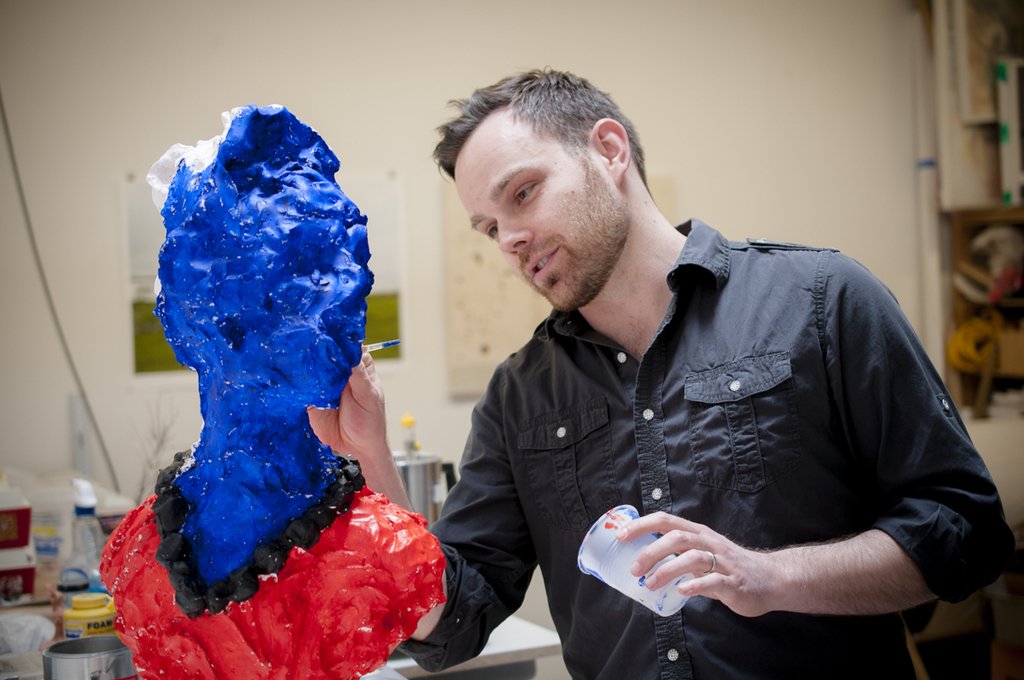 Harris in his studio. Photo by Candace Peterson

Since high school, with one particular teacher who inspired him, Harris has been fascinated with clay and 3D design. “I always loved activities as a kid that involved some type of experimenting or making,” he explained, sitting among a wide variety of strange items of his own creation, “I’m not trying to be unconventional, I just am genuinely curious about what will happen if I try new things, like burning the paint instead of just putting it on there. I have a real material curiosity.”

With the support of his parents, he attended University of Wisconsin Madison to pursue a degree in Fine Arts, focusing on ceramics. After graduating he worked for Kohler Art Center—the brand that makes toilets and bathtubs through a ceramic process called slip casting—and was able to practice his craft in a space reserved for resident artists. Harris made his move to Colorado in 2009 to attend graduate school at CU–Boulder, where he developed interests outside of ceramics and widened his approach to art. Currently he is the head of 3D Fine Arts at Rocky Mountain College of Arts and Design and works in his free time at his space in Tank Studios.

“I want the work to carry a sense of energy to it—the energy of the making of it. Where there was grappling and struggling and the surface reflects that.” 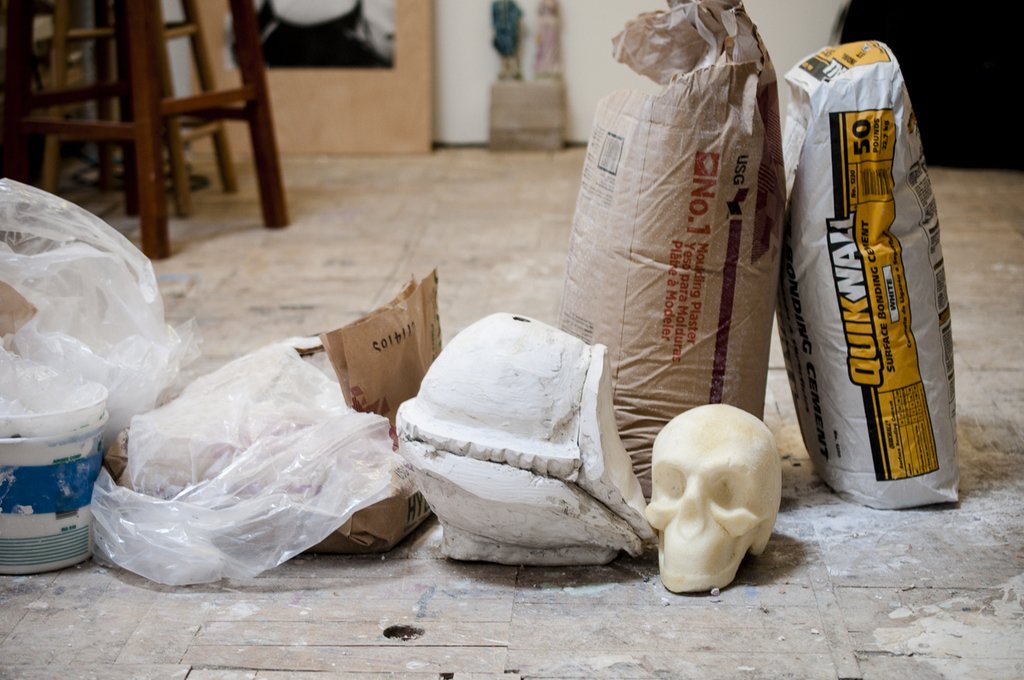 The sculptures Harris is currently working on typically take about two to three months—which might seem counterintuitive given their rough appeal—and that is exactly the thought that fueled him to journey into contemporary art—that “no matter what you’re doing, even if it looks haphazard, there is still a level of craftsmanship and skill.” First, he sculpts his idea in wet clay, then he takes a mold of the dried clay piece and sets that in plaster. He then creates a surface on the plaster, experimenting with different techniques and materials. Finally, he constructs a stand and a background for the sculpture to exist in, an environment for the piece.

Each step gives the sculptures more life, the layers adding to the emotional weight of the pieces. Harris remarks, “I want the work to carry a sense of energy to it—the energy of the making of it. Where there was grappling and struggling and the surface reflects that.”

Harris’ Baroque Selfies comes together in a powerful way, presenting a variety of sculptures that are kind of horrific. But, try to look away and you find a desire to keep looking because the flaws and unsightly expressions are riveting. The rawest of emotions are what come to mind, and everybody loves seeing someone else’s raw emotions. “It’s strange but it’s playful,” Harris explains, “there are intentionally opposites coming together in my work. And there is a real deep sense of seriousness.”

Each head sits atop a classically designed pedestal, a symbol that most anyone would equate with distinction, and in front of a background which reflects in abstract colors and designs a context specific to the sculpture’s mood. “My goal is to make a surface that is alluring, so people are drawn to it and then repulsed by it. I’m hoping that by putting it on these beautiful wooden structures that society has already deemed as worthy it allows them to accept this other thing, on top. And so the stands are allowing the viewer to enter the work but at the same time for the same reasons that are wrong in the ways we allow ourselves to enter into other people’s lives because we see that someone has something we want or is succeeding in a certain way.” 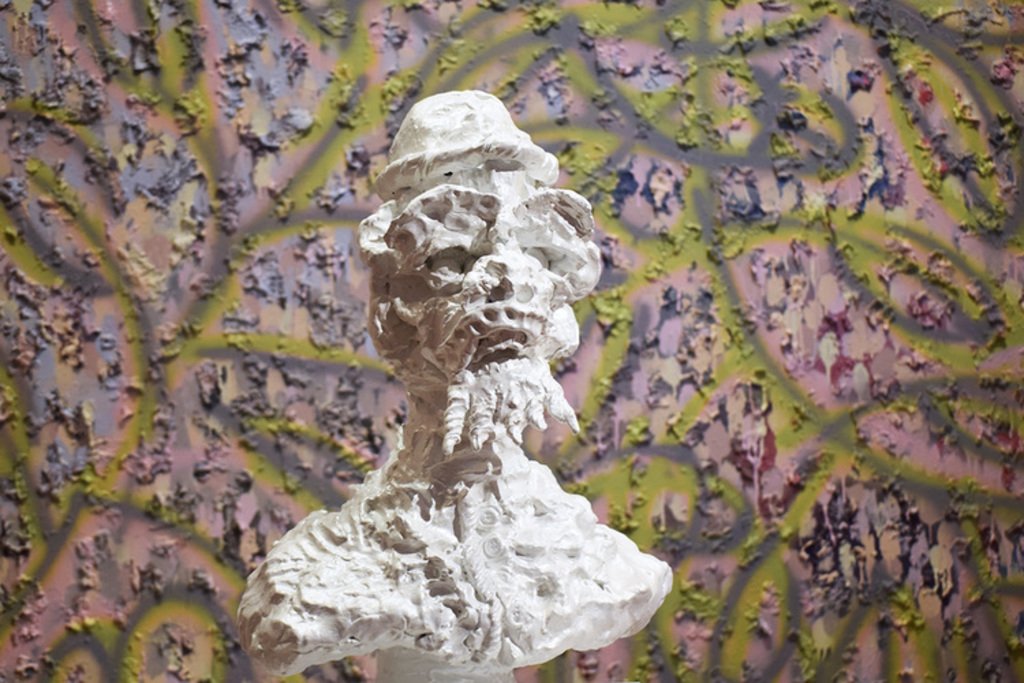 Ultimately these sculptures allow us the opportunity to question what we value—if the idealization of ourselves is the best course to take, or if accepting and accentuating flaws can be beautiful and, more importantly, useful. Harris remarks that his journey to creating this body of work came from the question, “where do I find the most value in life?” and the answer—deep relationships with other humans—led him to question the authenticity of human expression. He noticed that social crowds have certain indicators of status, “common denominators being power and wealth and looks, and those always seem to trump  humility or wisdom or generosity,” indicators that blur or cover–up flaws by substituting a genuine emotion with something empty, like money.

“It’s a general question I’m asking through my work that I hope leads to other people asking similar questions, questions about our insecurities and the practice, as humans, that we are all at some level insecure about something. And a lot of times we are trying to hide that flaw.”

These grotesque selfie sculptures grant us a moment to reflect on the very act of human portraiture. Not only is Harris paying homage to his influences—Bernini and Bacon—he is diving into the philosophical realm by exploring the reason we want to represent ourselves, pointing out that  “as humans we seek attention, and I think that is part of our weakness.”

See the odd and mesmerizing work of Matthew Harris at his upcoming exhibition at Leon Gallery, (1112 E. 17th St.) July 30–August 27, or see more photos of his previous work on his website. 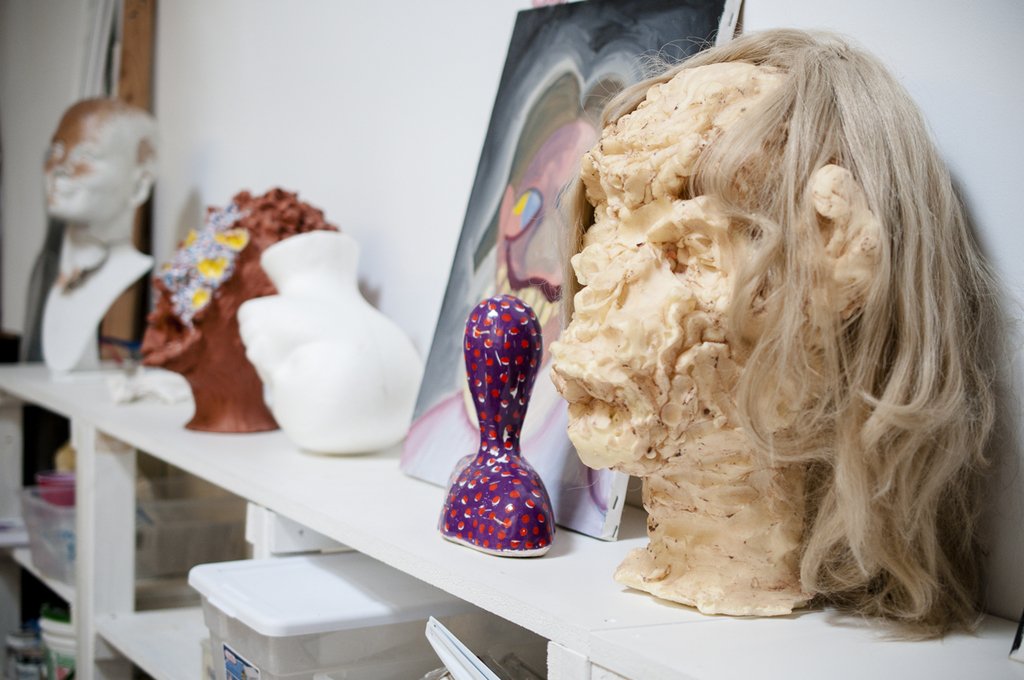 A shelf of grotesque heads in Harris’ studio. Photo by Candace Peterson. 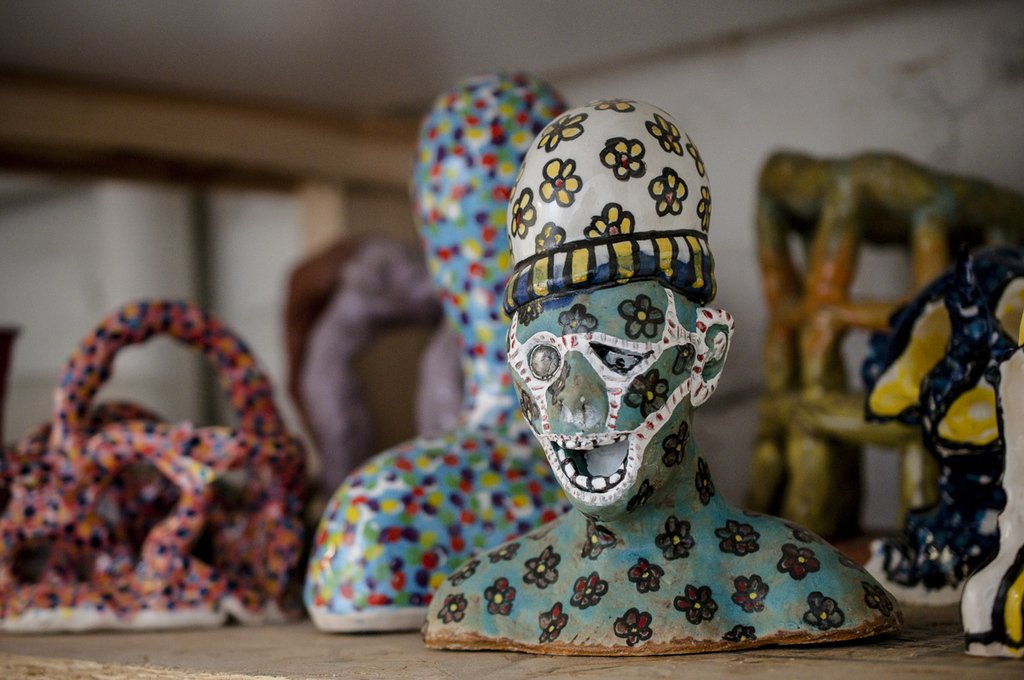 A shelf in the studio. Photo by Candace Peterson