From the creators Julie Plec and Kevin Williamson came a supernatural phenomenon that surprised everyone by its quick capture of audience’s attention. You know this phenomenon as Vampire Diaries. The pilot episode brought in the largest audience The CW had seen on a series premiere since the network’s beginning in 2006, averaging 4.9 million viewers. Since then, The CW has evolved into a dominant network that has brought about other extremely popular shows such as Jane the Virgin, Supernatural and Arrow. Vampire Diaries has maintained an average audience of 3.6 million viewers, has won 35 awards, has become the longest running Vampire show on television, and has just wrapped up its seventh season. So now that we have buttered you all up with the details, we will go on to tell you that 303 Magazine had the chance to have a chat with one of the show’s continual stars throughout all seven seasons, Candice King. King plays the spirited perfectionist that is Caroline Forbes, as well as being a fellow Colorado lover and resident. Between filming this highly-acclaimed, hit TV show, married life with The Fray band member, Joe King, and recently becoming a mother, Candice took time out of her extremely busy schedule to tell us about her times and experiences on the show that took audiences by their supernatural feelers, here is: 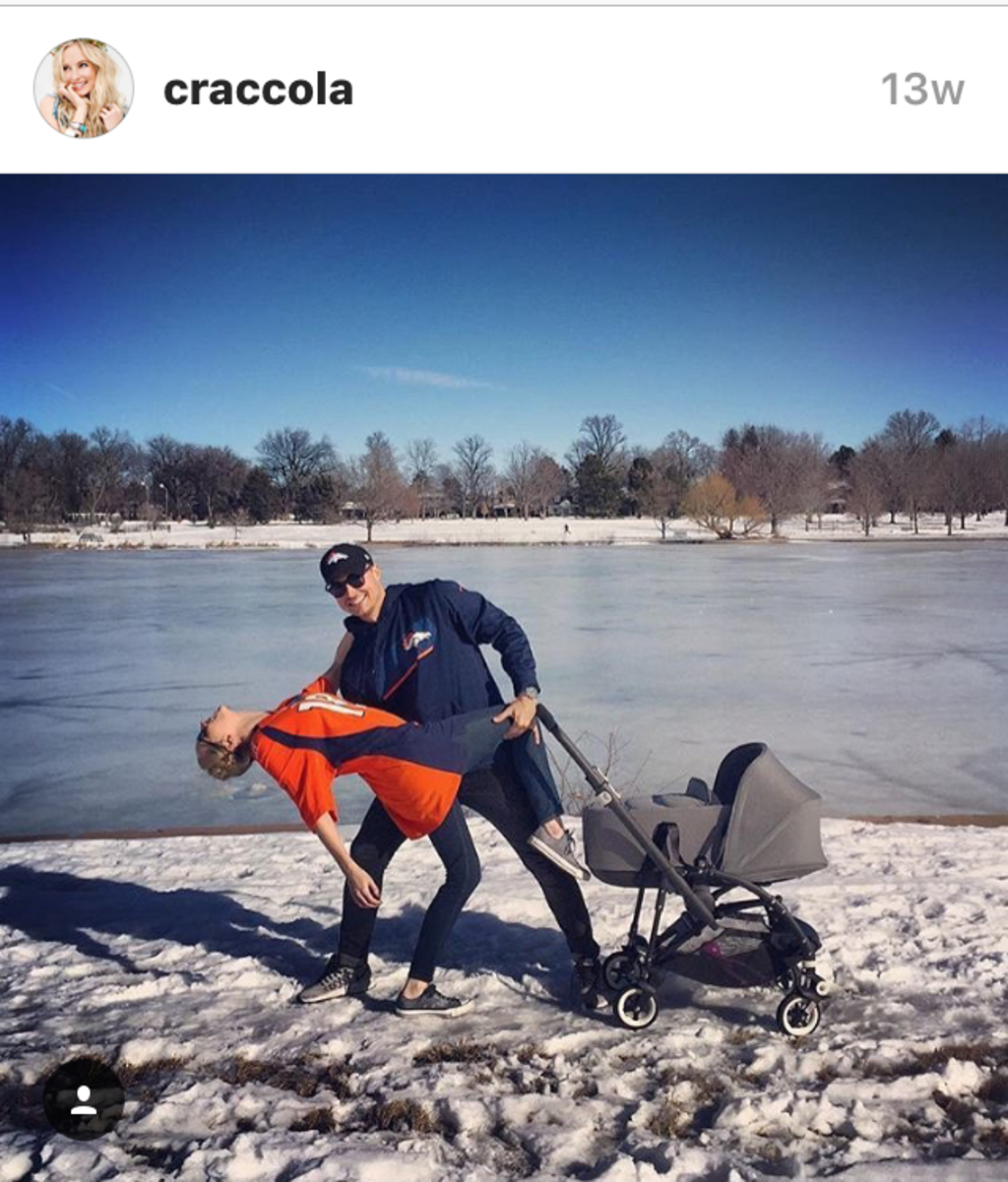 303: So, from some not-so-light Instagram stalking, I see that you and your husband are mighty Broncos fans, and that y’all even own a place in Denver. Do you two get to come stay often?

King: Yes, I’m here right now! My husband grew up here, so this is where we live—I love it. I’m just in Atlanta for work. The hard part is I’m not here consistently enough to stay on top of all the cool new places to go and all the restaurants. It is such a booming restaurant scene right now. I’ve had so much fun being here. I love Wash Park; it’s a great place for family–we get right into family mode. And yeah, my husband is a die-hard Broncos fan. It killed him not being at the Super Bowl this year, but our baby was 3 weeks old. I just looked at him like ‘no, no we are not going 3 weeks in….’ I felt like it would have just been too large of a pill to swallow if I wasn’t a Broncos fan, so I just jumped on that bandwagon real fast, and now I am in!

Now that it’s established that Candice King is a keeper….

303: What’s It like playing a teenager when you’re not?

King: Well, luckily the subject matter isn’t necessarily staying in the teen range. I mean for the first couple of years, I feel like even in your early 20s there isn’t much, much difference between a teenager and your early 20s, except for maybe a bit more freedom and you learn a lot harder from your mistakes because you’re not with your parents anymore. But now I think the subject matter is so different, and it’s much more life and death, and the relationships have a lot more layers to them so I don’t feel like there’s this undercurrent of pain and angst anymore with Caroline or the other characters. But it definitely is a lot of pressure to put on the good facial serums when you’re almost 29 playing an eternal 17-year-old. 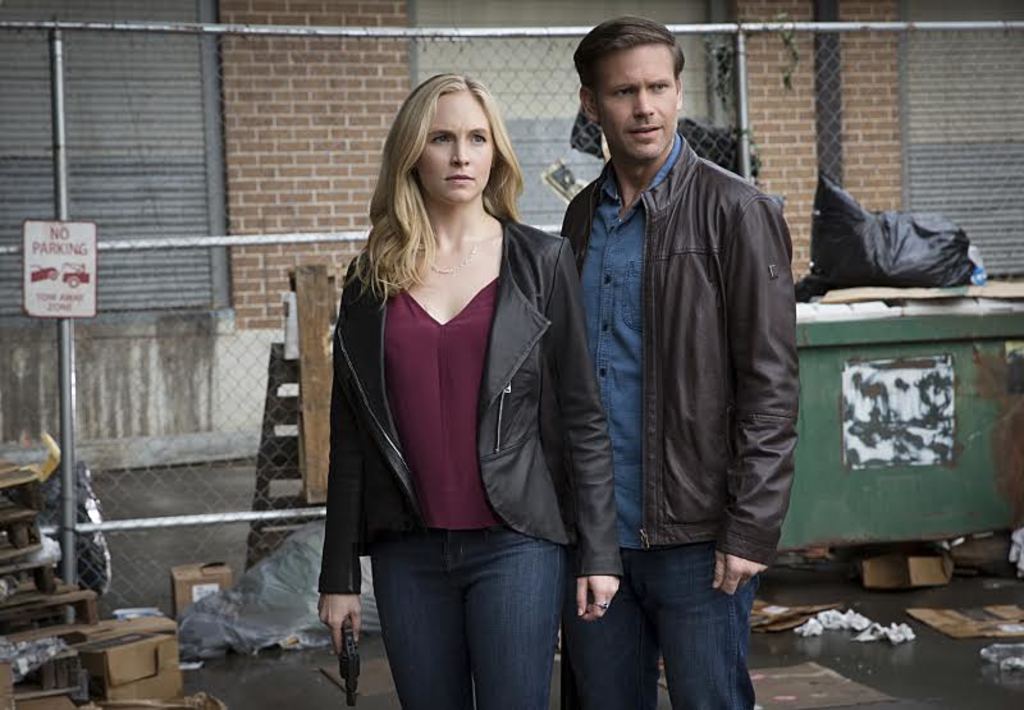 303: Caroline has had such a character change throughout the show–she has gone from irritating, stuck-up Caroline to strong and lovable Caroline. How do you feel about her progression?

King: Obviously as the story line and show has gone on, we’ve just seen Caroline grow into this really strong character. She wasn’t this one-note Queen Bee who just tore people down for no reason. We really got to know her and see her come out the other side of those angry teen years. I’ve been so grateful to be a part of this character for all of these seasons and to watch her grow as I’ve grown as well. 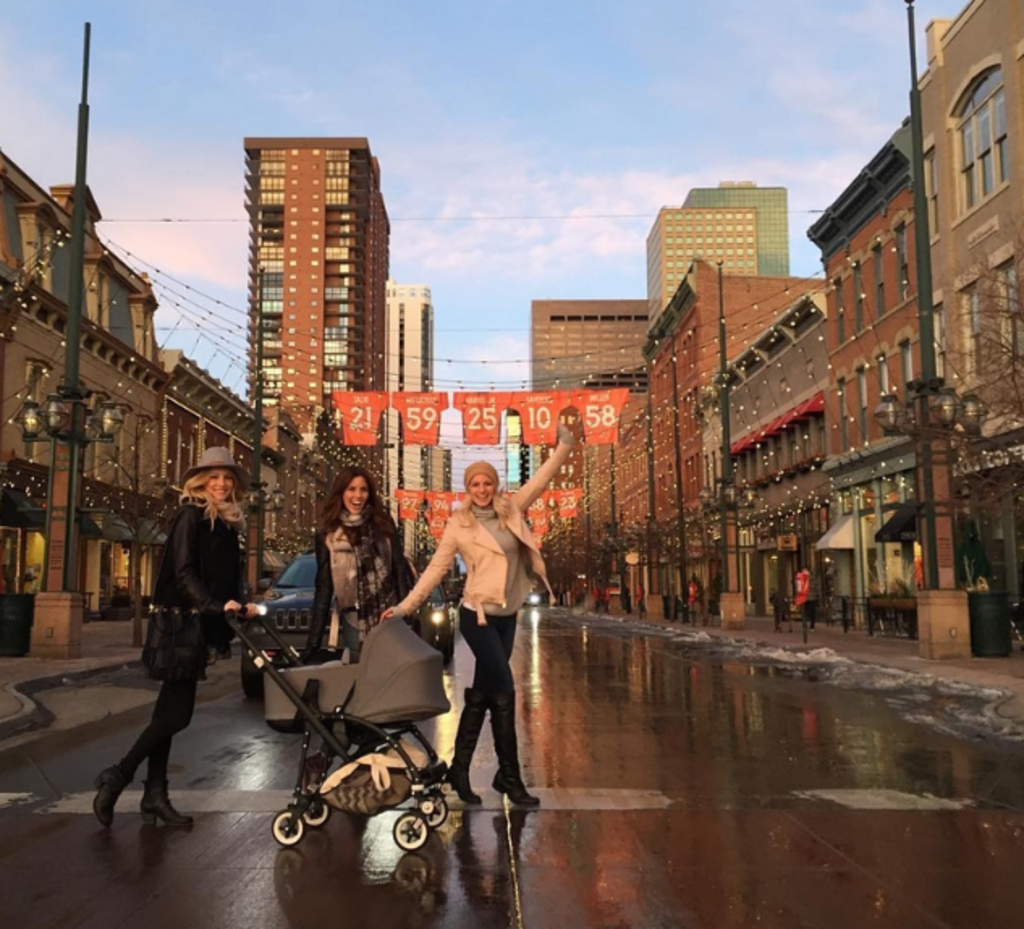 303: What was it like starting off on the Vampire Diaries road? What was your experience there?

King: Season 1, all of us were hoping to just keep our jobs; it was a vampire show, and we were told from day one that they weren’t going to be precious about who they kept and who they killed. They liked the idea of shock value, and people will die in a Vampire series. So, it was very nerve-wracking just to go to work. You just wanted to do your best and hoped you made the cut. But, it was such a fun experience, on top of being a great show to work on. It really is a wonderful cast and crew, and we even have some of the same crewmembers that we started with in season 1, so it is a family. When they decided to turn Caroline into a Vampire, I was actually a little nervous for the transition because every time they turned a female character into a Vampire, they killed her, and I just wanted to keep my job.

303: What has been the biggest hardship/trial you’ve had to overcome while filming the show?

King: I don’t think I’ve had to overcome anything. Obviously, in my personal life, those are pretty formative years, being 21 through 29–it’s been a very colorful time in my life. Professionally speaking, with the show, I’ve just been lucky enough to be on it and to learn. I’ve never worked on a series before, minus a couple guest appearances, so I was just kind of the greenest of the bunch. I will be forever grateful for what I’ve learned throughout this whole experience–it kind of was my whole education: on how to be on set, and how to work with certain confines of television…and schedule…and weather…and things changing last minute. So, I don’t think I’ve had to overcome anything; I just feel that I’ve been lucky enough to learn and grow through it all.

303: How much contact do y’all have with The Originals cast?

King: We see them, but the reality is that when we are all working, we’re all working–that can be anywhere from a six hour day to a fourteen hour day. So, it’s kind of hard, with those crazy work schedules, to time it out where we can all see each other. But when Julie’s [Julie Plec] in town, since she lives there [Atlanta] part of the year and has a place there, she’s always awesome about bringing everyone together to meet up and have dinner. I do feel like I always run into Charles [Charles Michael Davis] at Whole Foods–we seem to have an impromptu Whole Foods fate, and I see Phoebe [Pheobe Tonkin] a lot. Mostly we are all in our own little crazy world from July to April, but every once in a while, we get to have a big dinner together, which is really fun–especially because we are all right there. We all live down the street from each other too–everybody’s basically in the same neighborhood.

303: It must be fun to have all the Vampire Diaries cast in one neighborhood.

King: Well, John Hamm and Kevin Spacey are way cooler than we are – they are the coolest for people sighting in Atlanta right now. 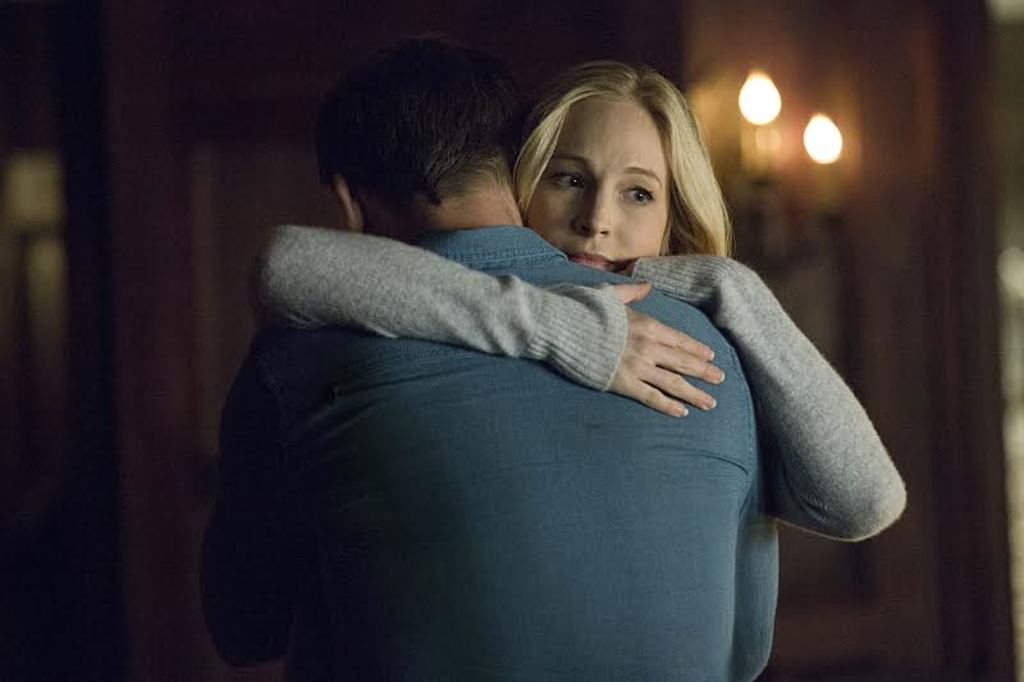 303: Who do you think is the best love interest for Caroline/Who is the healthiest choice?

King: At this point, I think it would be impossible for there to be a healthy love interest choice, but I love the idea of Caroline and Stefan together. I love the yin-yang of their relationship. He’s more brooding, and she’s very bubbly and all over the place, so I love that that’s where the show is kind of taking Caroline in her latest, more serious, romantic relationship–but I don’t know. Every year there’s always a curveball. This season, in particular, it was totally a curveball having Caroline and Alaric together, running their lives and being engaged. So, I have no idea where it’s going to go season eight, but personally, I love Caroline and Stefan together.

303: What’s it like working with all the notoriously pretty faces?

King: Well, we’ve all known each other for over seven years now, and we’ve all seen each other at 4 in the morning at the end of the day, and 4 in the morning at the beginning of the day. But, yes, everyone is very beautiful, inside and out. We are all just like a big family at this point–we’ve all met each other’s families. Ian [Somerhalder] is such a sweetheart, like the kind that kisses my grandmother on the cheek when he meets her. We’ve watched each other get married, and they were even the first group of people, after my parents and close friends outside of work, that I announced my pregnancy to, once I hit 3 months. I don’t know if there are words for this amazing experience, but I do say that the whole world can be fixed if everyone could just take a moment to look into Ian Somerhalder’s eyes.

303: What can you tell us about Elena coming back?

King: I have no idea. You know, on the show, as soon as someone died or was off the show, we used to throw them a big goodbye party, and it would be all tears and very sad. But the running joke on the show for Nina [Dobrev] is like ‘hey, maybe we’ll see you in a couple episodes!’ Obviously, there is a bigger story line going on for the story of Elena, and I think that the writers have done a great job of keeping her character relevant within the show. I know that the writers have a master plan, and I’ve never once tried to figure out what that is–I wouldn’t even know how to dive into the mythology that they have formed over the years, so I’m just along for the ride.

303: How was being pregnant on set? Was the storyline written around your pregnancy?

King: Yes. I’m very grateful that I had the support that I did in the sense that pregnancy is such a different journey for every person. From my experience, being able to come to work and have so many crew members that I’ve known for so long ask me if I need water or rest–I just felt very taken care of. It was really wonderful to feel that comfort while at work, especially because my husband and I split time. Meanwhile, Caroline kept busy. Caroline was being tortured; Caroline was running in heels; Caroline was locked up in a wardrobe closet. I have a whole funny assortment of photos for the baby book of me strung up in chains with blood dripping down me like, ‘4 months pregnant today,’ or with a 7-months pregnant belly with blood in my eye and a gag around my mouth, so it was pretty hilarious–pretty true to form for the Vampire Diaries. You never know where your character is going to end up, and Caroline always seems to be the damsel in distress, so it was pretty funny being the pregnant damsel in distress for a while.

King: Just honestly, motherhood and Season 8–that’s as full as my plate can be right now, and I’m very happy with it. I’m happy to take this hiatus time and this family time, and then I’ll go back to work on season 8!

Now that you have the inside scoop on this fantastical TV show and one of its shining stars, you can approach your viewership with a whole new knowledge of life in the Vampire Diaries world. Also, now that it is confirmed that it will be coming back for a Season 8, you will be able to use all this new found knowledge well. Until next season, folks!