We all know the infuriating feeling when you show up to a concert just to see the opener and the crowd is noisy, disruptive and disrespectful. Something tells me this is a feeling that fans of on-the-rise alt-rock band Caveman rarely feel. This past Sunday night the band immediately silenced a steadily growing crowd and inspired much applause along the way. There’s nothing more pleasing than watching the two men in front of you look-up the opening band you came to see on Wikipedia and nod their heads in approval – after the first song.

Caveman warmed up the audience for headliners Frightened Rabbit at The Ogden Theater this week. Maybe you were there and saw them while awaiting the Scottish indie-rock bands set, maybe you happened to have seen their eerie music video with Julia Stiles or maybe you crossed paths with them at a music festival last summer. Regardless of which, you probably don’t know much about the band—but you should, because the potential for success in these New York City musicians is there for anyone willing to look for it. 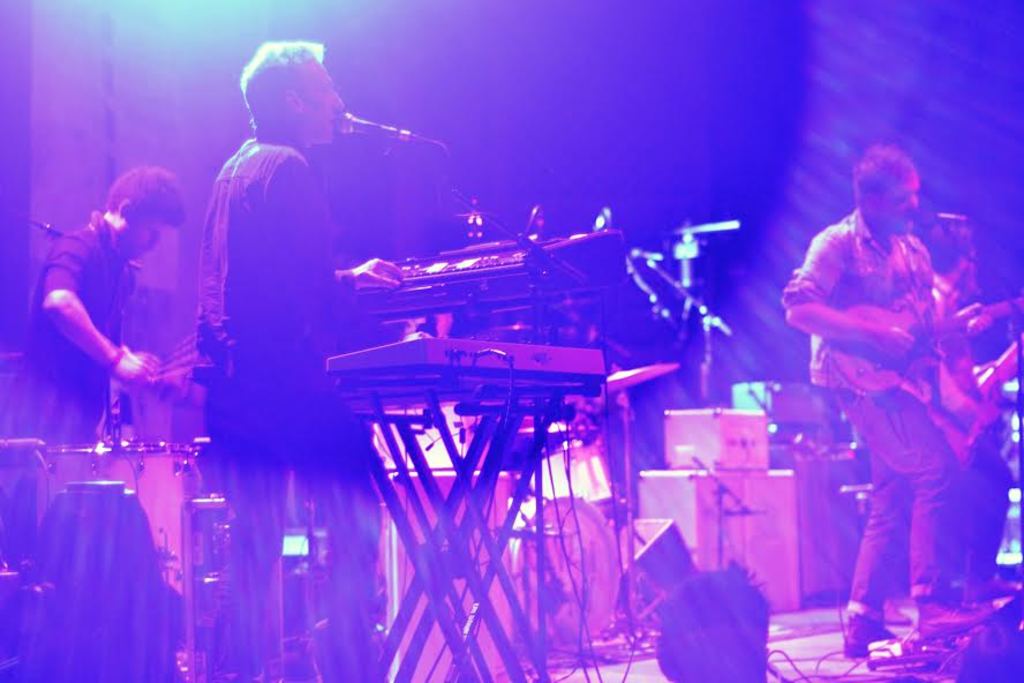 The 7 touring members of Caveman offered mesmerizing guitar solos to get lost in, prehistoric percussions often using maracas or their palms as drum sticks and ambient chords of synths continuously harmonizing in the background. Prolonging all of this in subtle build-ups as they frequently do, the band builds stories into their music provoked by our imaginations. I’m not sure whether that’s actually the intention of Caveman or entirely just a figment of my own overactive imagination, but either way it’s an artistry we don’t see crafted into music much these days.

The band appeased their fans by playing their sensational hit “In the City” from their 2013 self-titled album. During this performance, the skills of the guitarist Jimmy Carbonetti unequivocally shined in a phenomenal solo that ultimately faded out into bass-ridden synths. Though the band is incredibly talented, their expertise is highlighted in those exact lengthy and fluid guitar solos. Carbonetti previously part-owned a guitar shop in New York City according to an NPR Tiny Desk concert and interview. Before the close of Cobra Guitars in the Lower East Side, Carbonetti and associates hand-made all of their guitars from scratch — including Caveman’s. 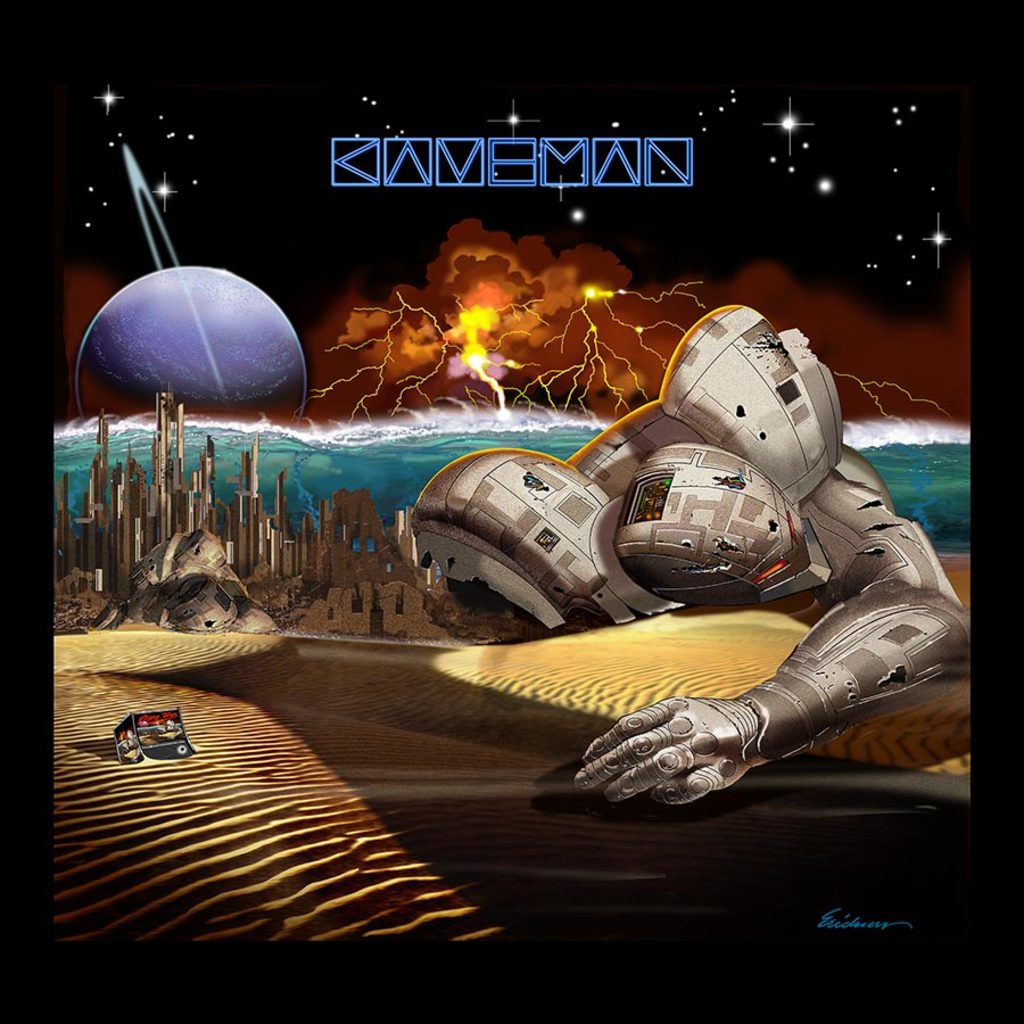 I don’t think the band themselves are even fully aware of their potential for success. They seem unpolished on the outside, yet oddly mature on the inside, with frontman Matthew Iwanusa often making hilariously awkward statements at The Ogden such as, “So, you guys like living in Denver?” or stating that they almost didn’t make it to the show because of the weather (when it was 70 and sunny outside). This was an interesting change of pace considering the previous times I’ve seen Caveman, Iwanusa had obviously taken the stage after having a few drinks (note: the drinks did not affect his performance). Their album art signifies this maturation – their 2013 self-titled album illustrates trees and mountains on the cover, and now three-years later Otero War is designed with spaceships and alien terrain. What was the past is now the future, and maybe what was once a caveman is now something entirely different. 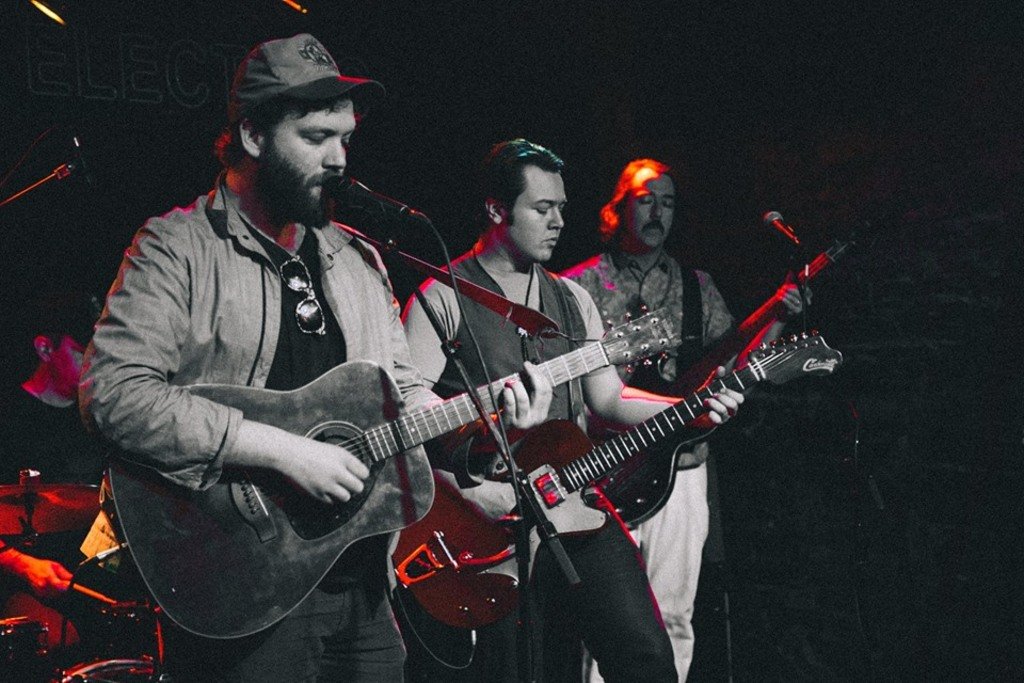 Caveman played a combination of favorites from the past and unreleased music from upcoming LP Otero War, such as one track titled “Human.”  The band claims that their new songs put a heavier emphasis on synthesizers and four-part harmonies as well as existential matters, likely provoking more imaginative stories through their music. The album is a three-year piece of work that promises to be a daring and carefully constructed LP from a more evolved Caveman to be released in June

Though modest, you can sense that the band loves what they do: They were thankful towards the crowd, they seemed to get lost in their own music and their movements were cohesive on stage as a group. The band compiled a wonderful variation of instrumentations to invent a unique sound and then translated it live effortlessly. All of this combined with the loud volume they brought to The Ogden Theater, Caveman caught the crowd of another band by storm, satisfied their own fans and likely made quite a few more in doing so.