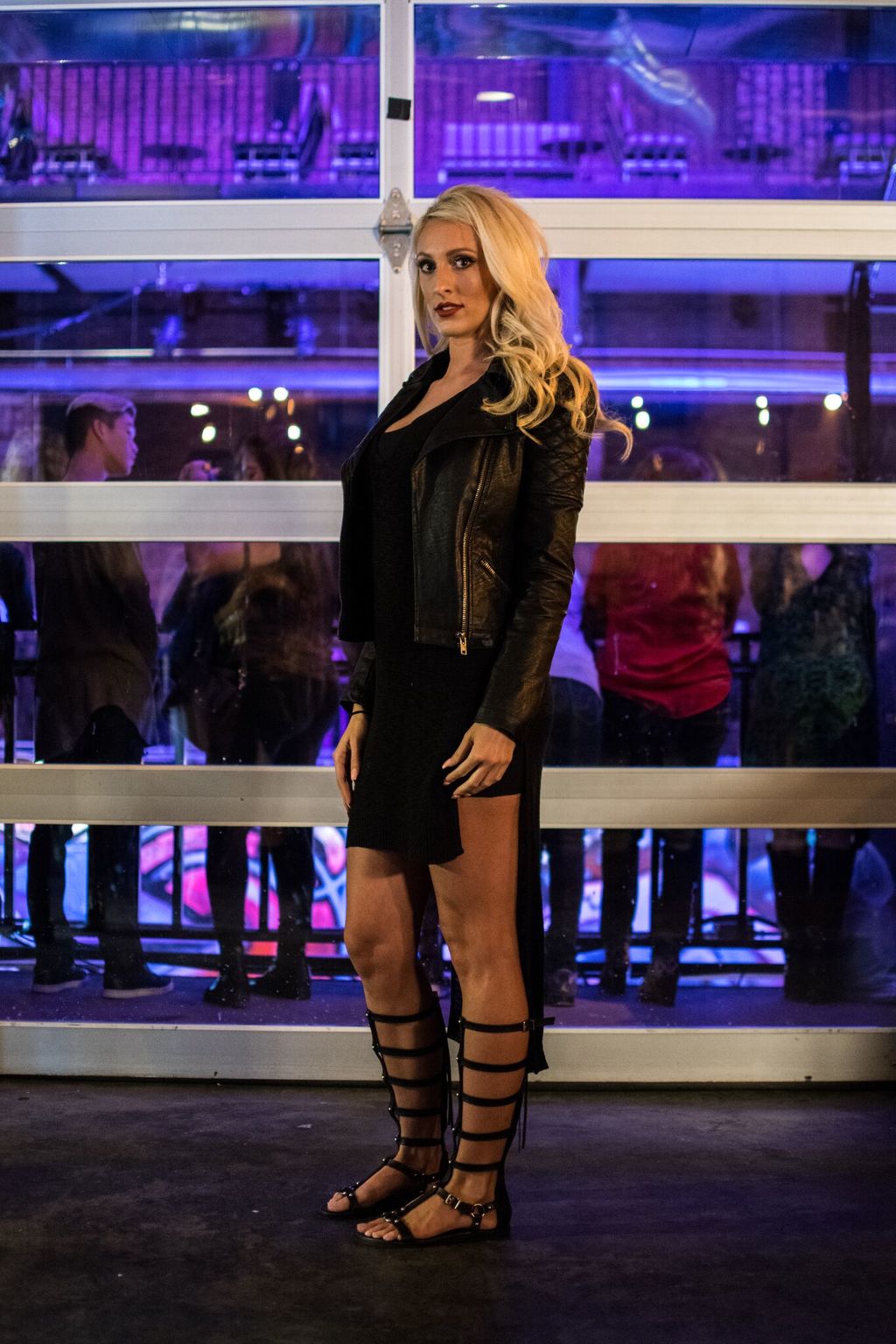 Here we have one of the creative make-up artists that made this weekend possible. She adds flare to her all black ensemble with Grecian-inspired sandals and staggered lengths of her high-low top and fitted shorts. Photo by Sina Ghozati.

The models working the runway at Denver Fashion Weekend weren’t the only ones dressed head to toe in the latest trends—the crowd that gathered at this year’s fashion show filled City Hall with more glitz, glam, edge and allure than ever before.

Each night of Denver Fashion Weekend Spring ’16 presented by Schomp Automotive drew an excited crowd of Denver’s best dressed. The 303 fashion team scouted out their favorite looks and have a lot to say about the street style at this year’s show.

Aaron Rodriguez, a writer for the 303 fashion team was drawn to the diversity of styles- from feminine florals and nude shades to tailored, straight lines and especially all the black color in between:

“Denver’s growing and I think everyone’s style personifies that as the weekend’s fashion ranged from formal suits and floral dresses to destroyed denim and long tees. I love anything in black and I was ecstatic to see black not just as one of the things so many people were wearing but also in so many collections, for spring nonetheless. For example, Royal from Night three was my favorite collection because every outfit on the runway had black in it. It was edgy with leather skirts, leather bucket hats and, one of my favorite trends at the moment, long shirts with scoop hems. Also, it’s clear DFW is important to the fashion community, you can tell by the excitement of the models who are walking, the press taking pictures, and everyone who comes to connect with other creatives because they know it’s a fashion event that shouldn’t be missed.” 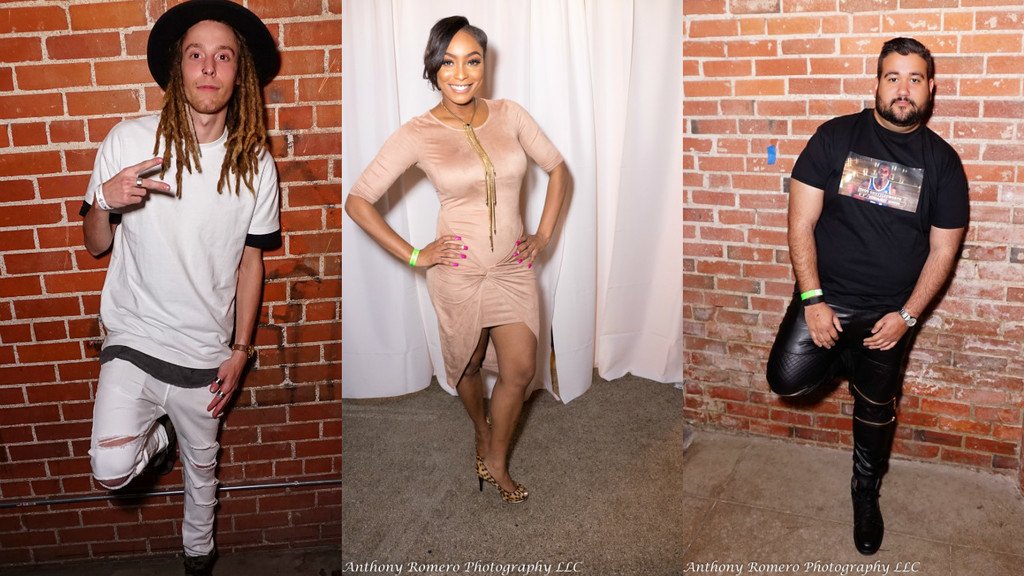 From left: “Hunter, one of DFW’s designers wearing a shirt and hat by Forever 21, boots by This is Wear I Roam, and undershirt by Urban Outfitters. Miarra Jackson in a Hot Miami Styles dress, Bebe necklace, and Guess heels. Jesus Shuttleworth Tee by Notorious, leather pants by Notorious, Dunks by Jordan. Photos by Anthony Romero.

Another one of our talented fashion writers, Jocelyn Blake, fell in love with the presence of mixing casual wear with formal vintage wear- a pairing that Colorado does so well.

“This was my first Denver Fashion Week and I completely fell in love. I am such a southern belle so I truly loved the amount of edgy style that was seen throughout the weekend. Above all things, some of the most fashionable people at DFW were rocking original, local pieces which speaks to the amazing melting pot of fashion here in the Mile High City. Two of my favorite looks included a vintage, pinup look featuring a beautiful, blue Ted Baker dress and her friend who rocked a Jesus Shuttlesworth shirt paired with leather pants and some dope sneakers. The contrast between the two of them was so crazy but they both exemplified great style and fashion.” 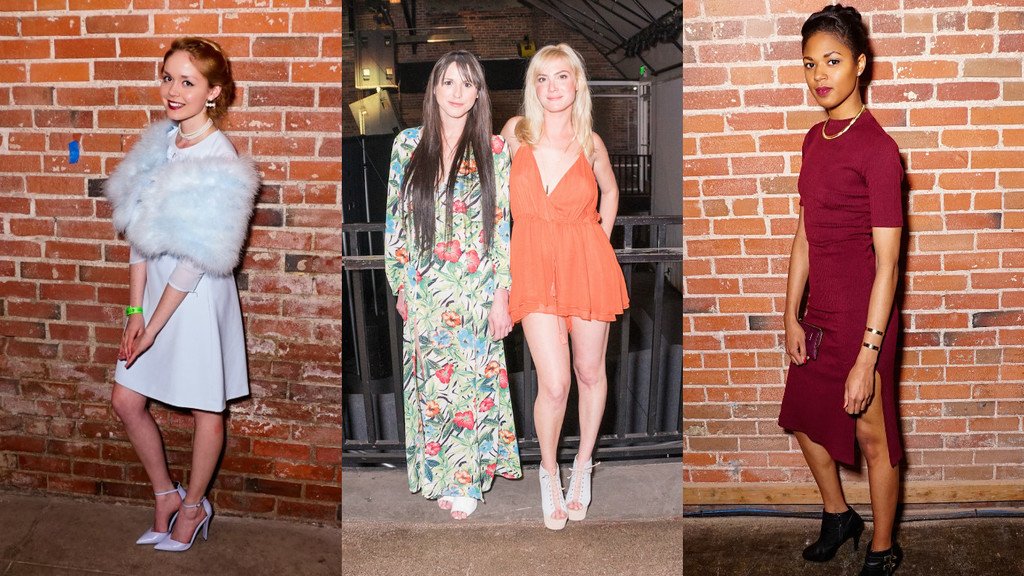 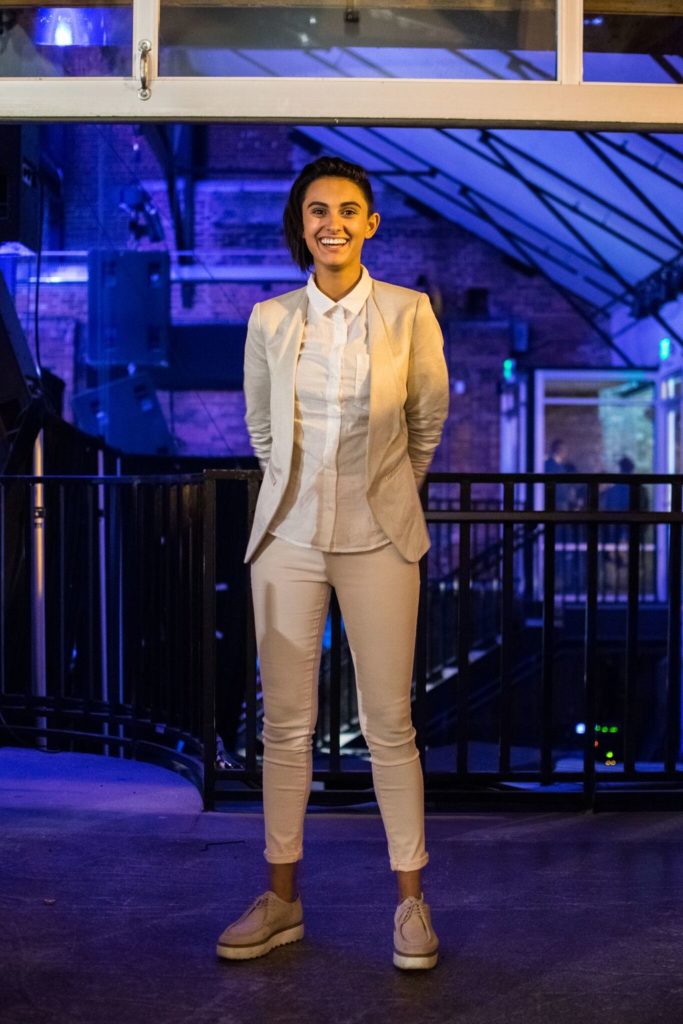 Sneakers, a blazer, and clean white lines- all in one. Photo by Sina Ghozati. 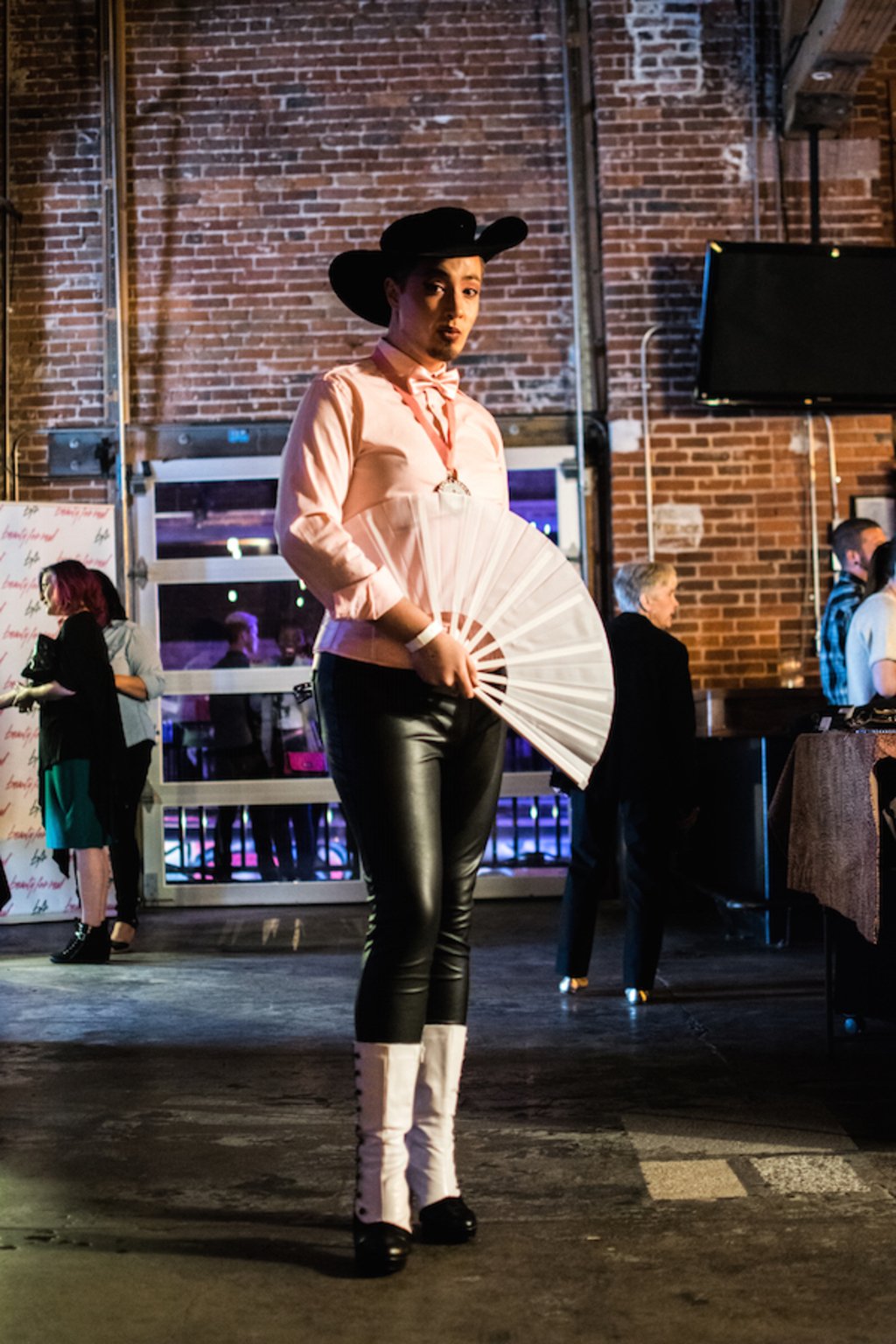 Androgyny and gender-bending styles were prevalent at DFW. Photo by Sina Ghozati.

As for me, I was enamored with the feeling of time travel that so many of the ensembles brought about. We saw 1970-inspired afro-dos and wide legged flare and 1990s grunge amidst 2016 top knots and skin-tight body suits. By the end of the night, I began to doubt the relevance of associating a time period with a look- why should bell bottoms and dark lips belong in a different decade than this? 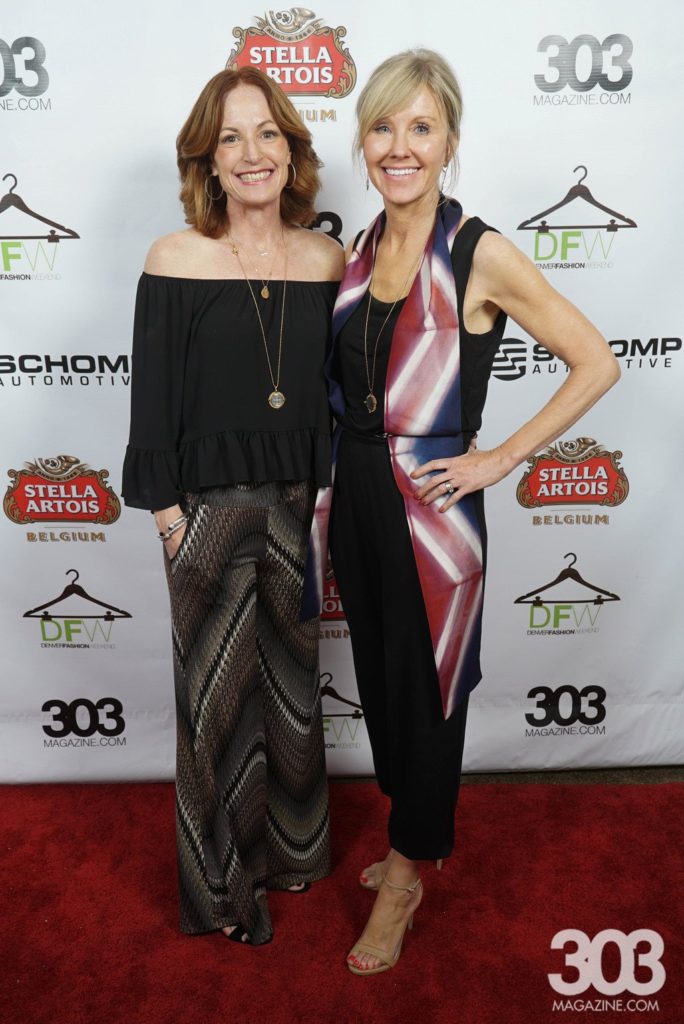 The ladies of Lions in Four. Photo by Kyle Cooper.

The gals from Lions in Four came with a full force of style and grace this weekend. For the hair show, they came in understated black ensembles played up by patterns and free-flowing lines. The wide-legged pant and off-the-shoulder top shown on the left brought in those 1970s vibes we kept spotting. Body suits, one-pieces and rompers like the one shown on the right made a much more frequent appearance across the events hall. 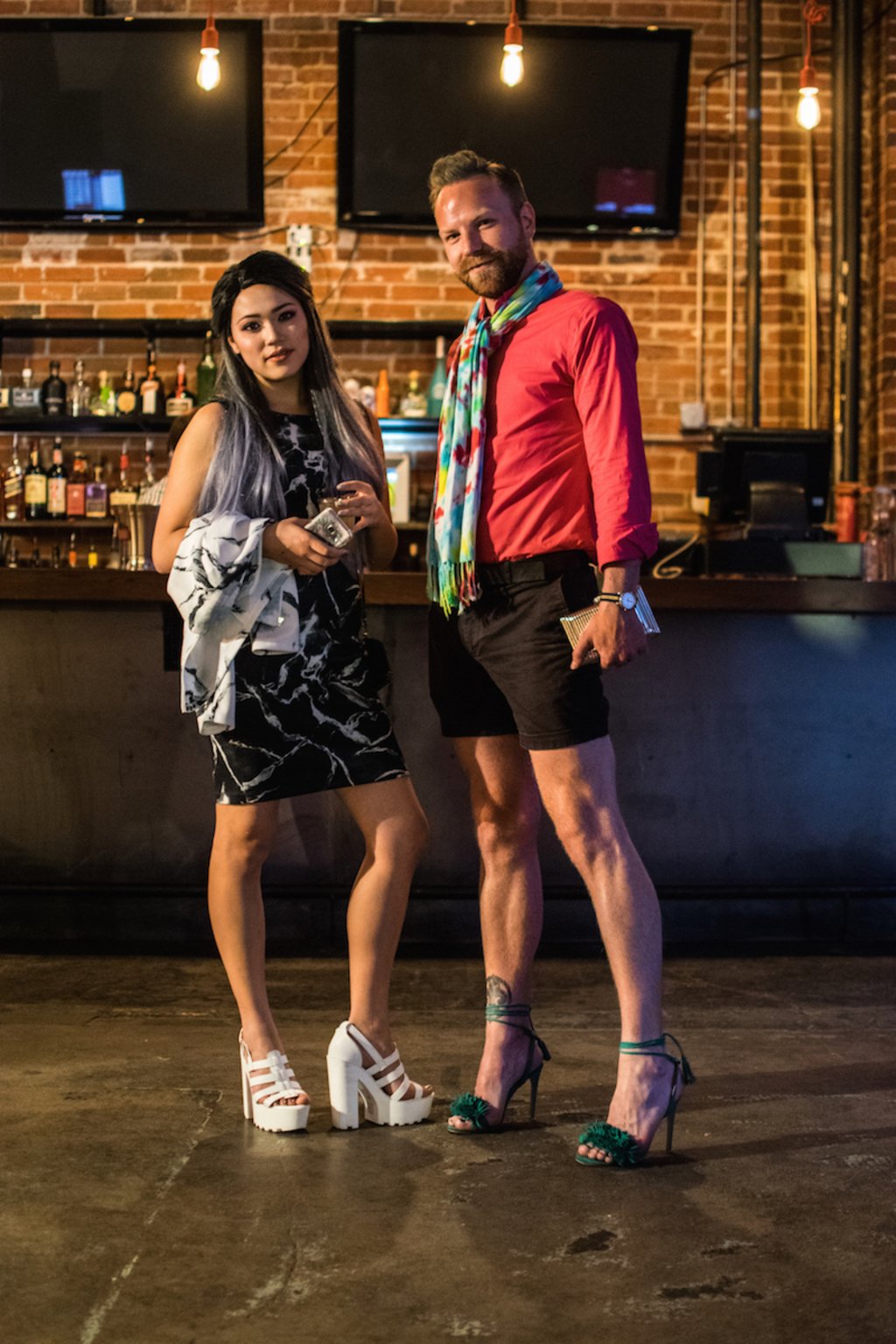 One of the most dynamic duos of the weekend- present every night, with a daring look for each day. Photo by Sina Ghozati.

The stacked platforms shown above send us back to a 1990 punk club where grunge was hot and flat shoes certainly were not. Her look is completed with a black and white marble dress and coordinated jacket and a black and silver ombre hair-do to match. Next to the slender, modern strap-y heel and tie die scarf that add copious amounts of allure to this simple button-up and fitted shorts, we see a bit of the time travel that flowed across the shows.

While all the clothes and shoes were good fun- there just isn’t DFW without the hair. Top knots stood like water bobbies across the crowd and who could have missed that glorious afro? 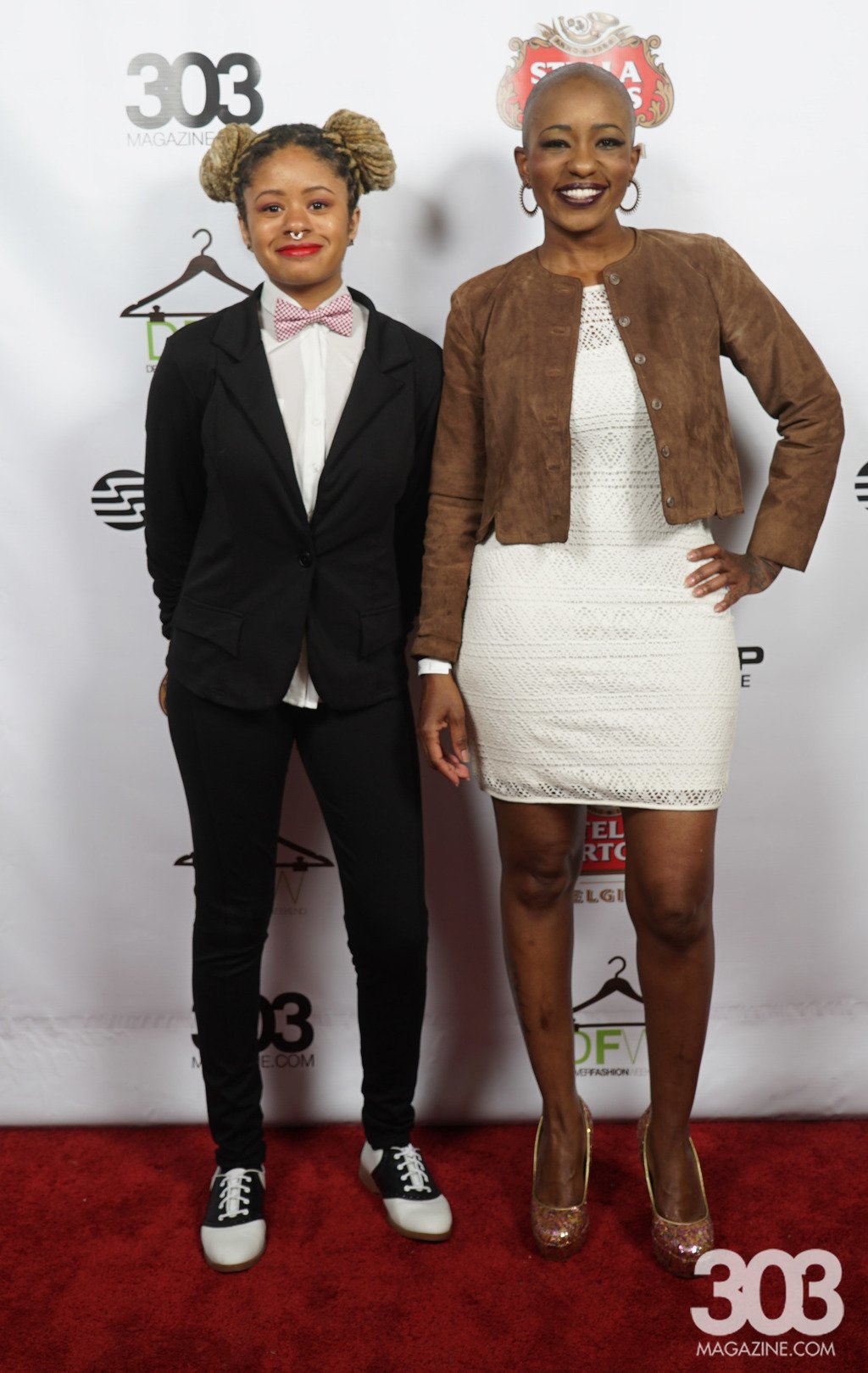 The double top-knot alongside bold and confident hair-free living. Photo by Kyle Cooper. 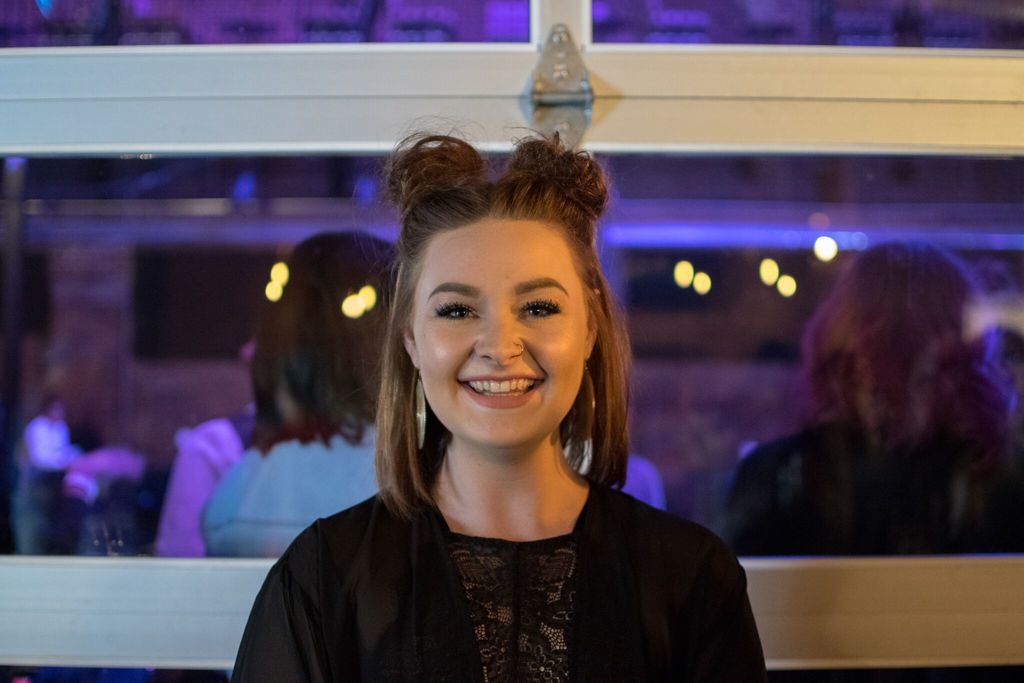 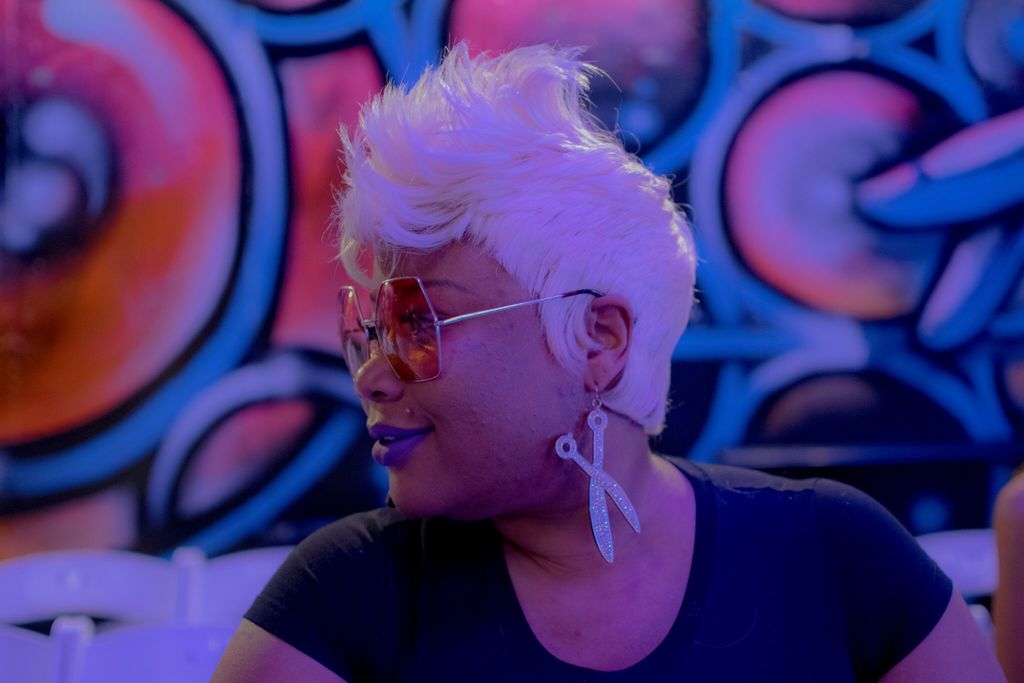 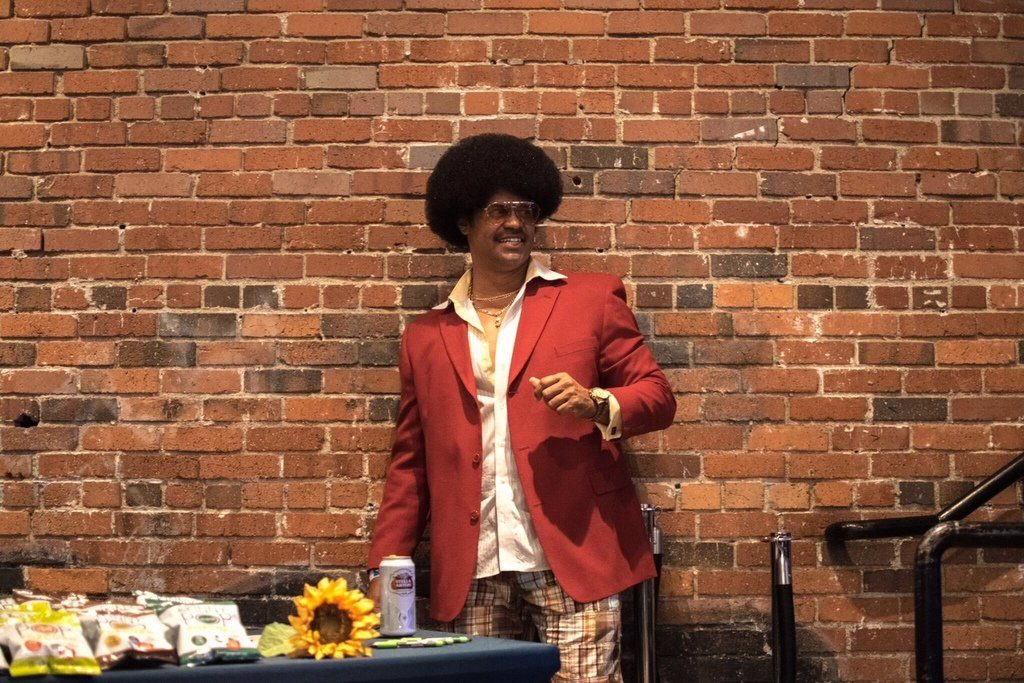 Now that Denver Fashion Weekend 2016 is over, we are beginning the countdown to the Fall 2016 show. Until then, we have the memory of a fashion-forward crowd of local Coloradoans who worked the red carpet alongside the models on stage at this year’s event. For more images and fashion fun, follow @303_fashion on Instagram and stay tuned to the magazine throughout this week.