CocoRosie Shared their Mystical Music at the Gothic

The operatic voice of Sierra Casady opened up CocoRosie’s performance at the Gothic on Friday, March 25th. With a drifting piano melody supporting her controlled vocal box, her sister, Bianca, added her childish and fairy-like voice to the song, “Heartache City.” Off the titular album they just released in September 2015, “Heartache City” is stripped down and speaks of desert air — dusty, old, forgotten places that poetic lyrics can romanticize. 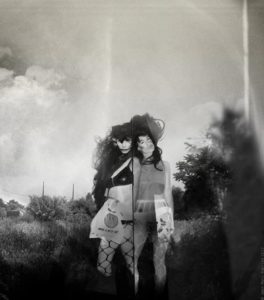 Beat boxer, Tez, joined them on the stage and even performed a solo piece half way through the show. The crowd grappled with his energy — I am still bewildered at all the layered sounds that could come from just his one voice. There was no need from a drum set with Tez included in their line-up, and their entire album is filled with his syncopated vocals and colored bounces in lieu of traditional drumming. And melting into their song “Un Beso,” it was clear that a CocoRosie show is an art performance and not just any regular concert.

I think if any other duo had tried to capture the crowd with such a poignant and simple show, it would have fallen flat. However, the crowd recognized the sisters for who they were — explorers of art, tongue-twisters of words. They didn’t need a whole lot of instrumental backing to connect to the crowd; Bianca’s rap-like singing and Sierra’s wide vocal range flowed back and forth between one another, creating waves that the crowd could dive into. They touched each word delicately, “Perhaps I’ll meet you then / On the decadent horizon / Where young lovers lock lips / Looking at the lockness monster,” and the words swirled effortlessly from Bianca’s quick rapping, contrasting against Sierra’s soulful croons.

Proudly proclaimed feminists, the two sisters have previously received backlash from critics about the subject matter of their lyrics. Yet the sisters have a unique background that give way to most of their musical choices — born to traveling and hippie parents, the daughters traipsed across America for most of their childhood and young adult life. A sort of lost childhood that comes out in their playful and melancholic songs; the bareness of their tracks just deepens the heaviness of their lyrics, as in their song, “Lost Girls.” With chirping piano chords and trumpet blares, one may not realize that this song was commenting on the lack of safety for women. And in the crowded theater of the Gothic, our concern was focused on getting the best standing position to see the sisters perform their art. Having carefree fun while being told of world horrors — all a part of the creative paradox of CocoRosie.

The song, “Big and Black,” also speaks to this mentality. Off their new album, this song undoubtedly highlights the racism that has flooded the news, universities, and cities since the protests in Ferguson. The crowd grew more quiet as they felt the stirring energy in Bianca rise to the surface. I understand how critics can be ruthless to the sisters as they speak their mind, yet I think their art is positive — if we ignore what is happening around us, how will anything ever be solved?

They played old favorites as well, such as “Werewolf” and “Lemonade” from their albums, “The Adventures of Ghosthorse & Stillborn” and “Grey Oceans” respectively. Filled with cubist images, Bianca’s words seemed derived from the subconscious, one image toppling onto the next. “Loose grip on gravity falls sky blinding crumbling walls / River sweep away my memories of / Children’s things, a young mother’s love,” Bianca spit into the microphone during “Werewolf,” with Tez calmly supporting her with beats in the background.

Maybe I’m a biased listener because I’ve been following this duo since their entrance into the musical world in the early 2000s. But CocoRosie captured the lights and darks of music and struck a balance between childhood and stepping out into the world. Using toys as instruments, voices as conduits for musical beats, the crowd swiftly fell under the mystical spell cast by the sisters. From hip-hop vibes to dreamy wonderland chants, it was easy to fall in love as snow tittered off the roofs of the Gothic, its occupants unaware of anything outside of the CocoRosie bubble.