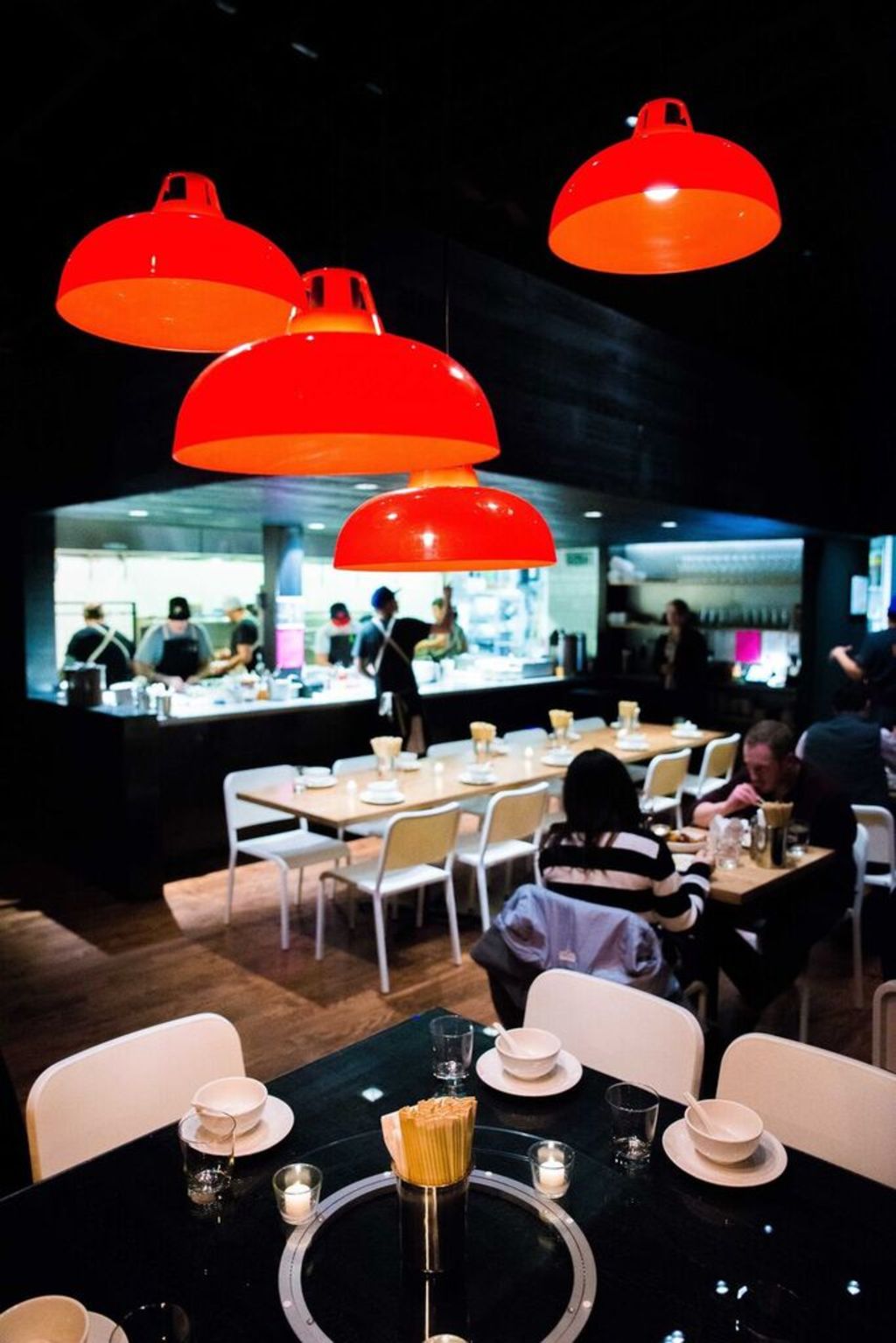 Over the last few years, Denver restaurants focusing on East Asian and Southeast Asian gastronomy have carved out a commanding presence in the local dining scene. Familiar industry powerhouses including brothers Toshihiro and Yasuhiro Kizaki of Sushi Den/OTOTO/Izakaya den, Jeff Osaka of Osaka Ramen/Sushi-Rama and Lon Symensma & Ryan Gorby of ChoLon/Cho77 were able to respectively open new ramen, sushi and street food restaurants in 2015, while newcomers behind the likes of Onefold and Komotodo Sushi Burrito settled into niche fast-casual fusion realms, serving up unique alternatives for breakfast and lunch. Noticeably missing from this landscape, however, was a fresh take on Chinese.

Thus, while the name pays homage to a forgotten past—anchored too by the story of the Teshima family, Rafu Shoyu and Oriental Foods—Tommy Lee’s hope to draw attention to lesser-known regional styles of Chinese cuisine was the first piece of the Hop Alley puzzle. He acknowledges that it would have been rather easy for him to just do another Uncle, but instead he took the opportunity to take a new approach, one in which he could take cues from his family’s background.
In describing the many trips he took to Hong Kong as a child as essential steps in his journey toward the kitchen, Lee’s newfound enthusiasm for cooking traditional Chinese recipes is self-evident. Bolstered by the claim that Asian cuisine “has some of the most addicting flavors,” Lee was therefore eager to find a way to do them justice by using higher quality ingredients than the average Chinese restaurant. He also sought the approval of his forebears.
“My dad was surprised at how good [Hop Alley] was. My parents and their friends are very particular—having them like the food means a lot,” said Lee. After all, he continued, “Chinese food is just as bold as any other European cuisine; as seemingly simple as it is, it’s not necessarily easy to execute.”
For his part, Lee’s fellow chef, Todd Somma, is of the mind that this test of skill is what helped finalize their decision to cook Chinese. More than once, Somma referred to Danny Bowien’s San Francisco hotspot Mission Chinese as having a significant influence on Hop Alley’s origins.

“To me it was eye-opening to realize there’s a world of Chinese cuisine that I’d never been exposed to and I didn’t know could be like this. I thought, why isn’t this out there?” said Somma. 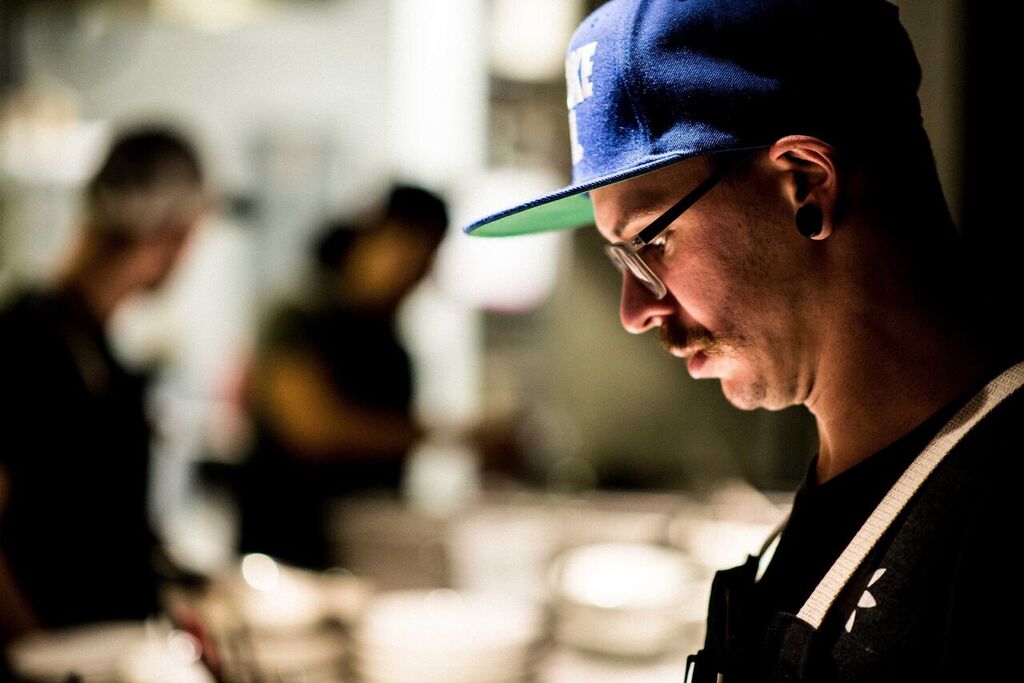 Furthermore, as the day-to-day leader of Hop Alley’s kitchen staff, Somma was sure to make clear his position on modern food culture.
“[In terms of inspiration] I would point to [Bowien] and I would point to Grant Atchatz with Next. The fact that he told Chicago, ‘I can be the best at any cuisine I want to be,’ was just so cool to me. To see those two chefs really stand up and say, Chinese is something special and we can do whatever the hell we want—that gave me the confidence that when Tommy and I were talking about the concept, it was like, you know what? Let’s challenge ourselves and let’s do what we want for the city. Let’s do Chinese food. It’s possible. Why can’t we do it, too?” 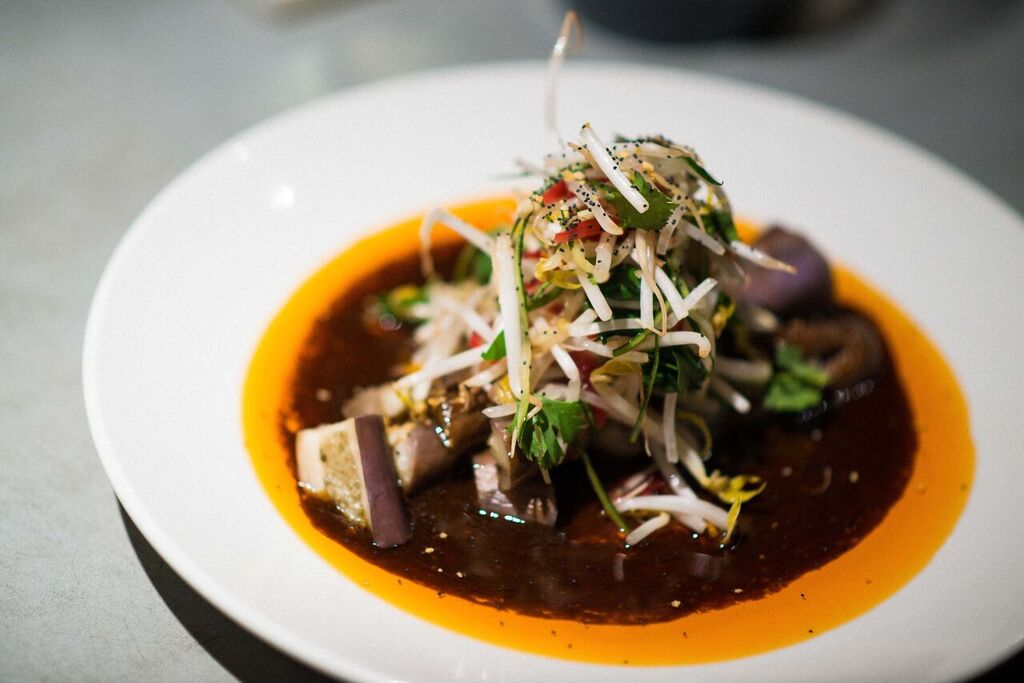 Hop Alley’s gestation period involved a furious back-and-forth recipe collaboration between Somma and Lee via email and, in the end, a number of dishes that the duo were sure to be best-sellers didn’t even make the final cut. The decision-making came down to two factors. First, Lee recalled using the test kitchen as a means of weeding out flavors that were too far off the spectrum they wanted to set.
“Just because [a recipe] is authentic and traditional doesn’t automatically make it good,” he said. Second, because Chinese food isn’t particularly entree-driven, Lee wanted to craft a multifaceted menu. “The best way to eat this cuisine,” reiterated Somma, is to achieve “balance within a meal, throughout several plates.”
As if to live up to the loud pink paper on which it is printed, Hop Alley’s bill of fare accordingly cuts a broad swath. Though the pricing is appropriate, the 16-item menu can present a trying game of this-or-that as you watch the tab stack up, which is why it’s best to go there with friends or family. After our first few visits, we stand by the salt & pepper soft shell crabs ($23), steamed eggplant ($12) and Beijing duck roll ($15) as three heavy-hitting dishes with which you can’t go wrong. You may also find yourself drawn to the suan ni pork chop ($14) and Alamosa bass ($38) — both are prepared on the restaurant’s wood-fired grill, the presence of which is yet another exhibition of Lee and Somma’s stubborn insistence (in a good way) on reconsidering the Chinese food experience.

Hop Alley’s many links to historical Denver help to call attention to this mission. Primarily, Lee’s very reclamation of the moniker “Hop Alley,” regardless of its pejorative origins (“Hop” is slang for opium), places the restaurant firmly within the record of Chinese-American culture in Denver—truth be told, what better way to honor a forgotten era? Given that Rafu Shoyu played a similar role vis–à–vis cultural diffusion in its time, the history of the building itself connects the distant past to the present.
And while to some Hop Alley might appear to be yet another new restaurant, not only does it carry on the legacy of the Teshima family, but it also continues efforts of the many other people and businesses that have helped Asian culture to prosper in Denver. For that reason, Hop Alley is more than just another spoke in the wheel of RiNo’s revolution–serendipitous or not— it is nevertheless, a piece of living history.
—
Missed part 1? Go here to read it now. Hop Alley is located at 3500 Larimer Street, Denver Colorado. It is closed Sundays, open Monday through Thursday from 5:30 to 10:30 p.m. and Friday through Saturday 5:30 to 11 p.m.
Photography by Noah Berg. 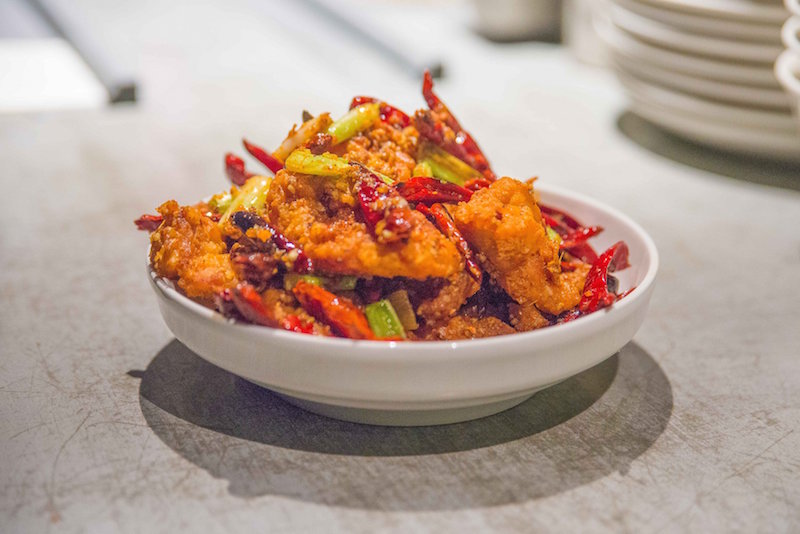 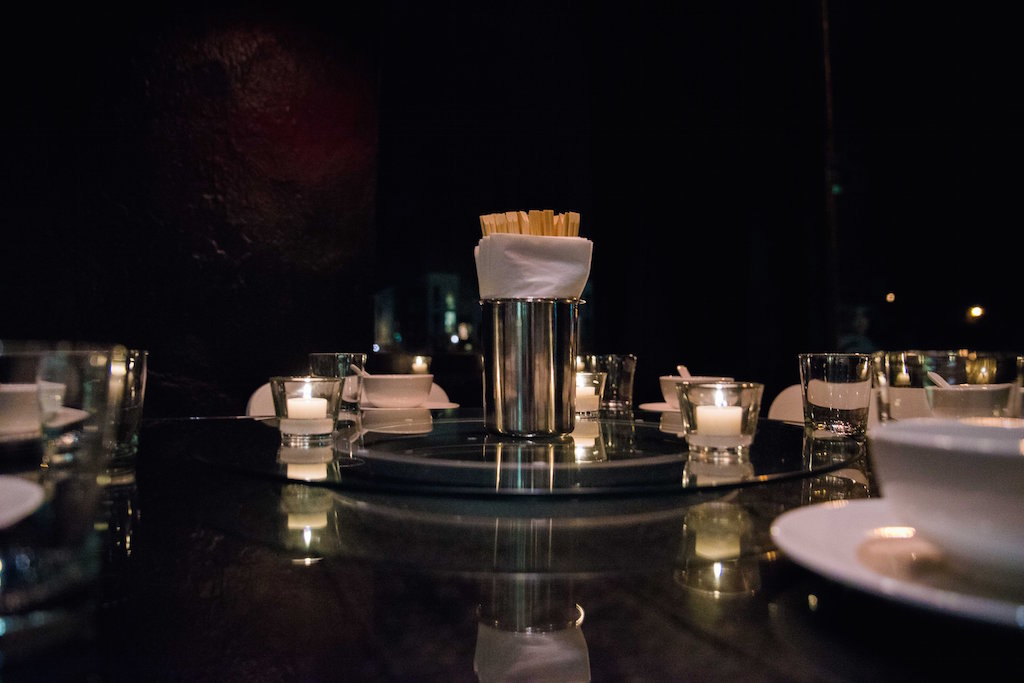 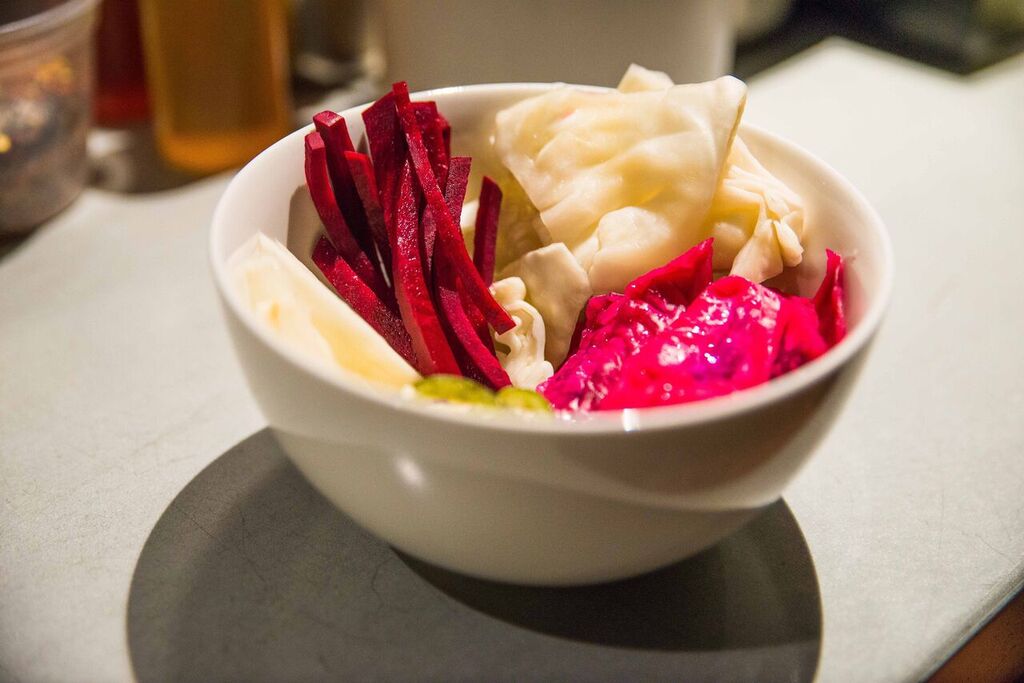 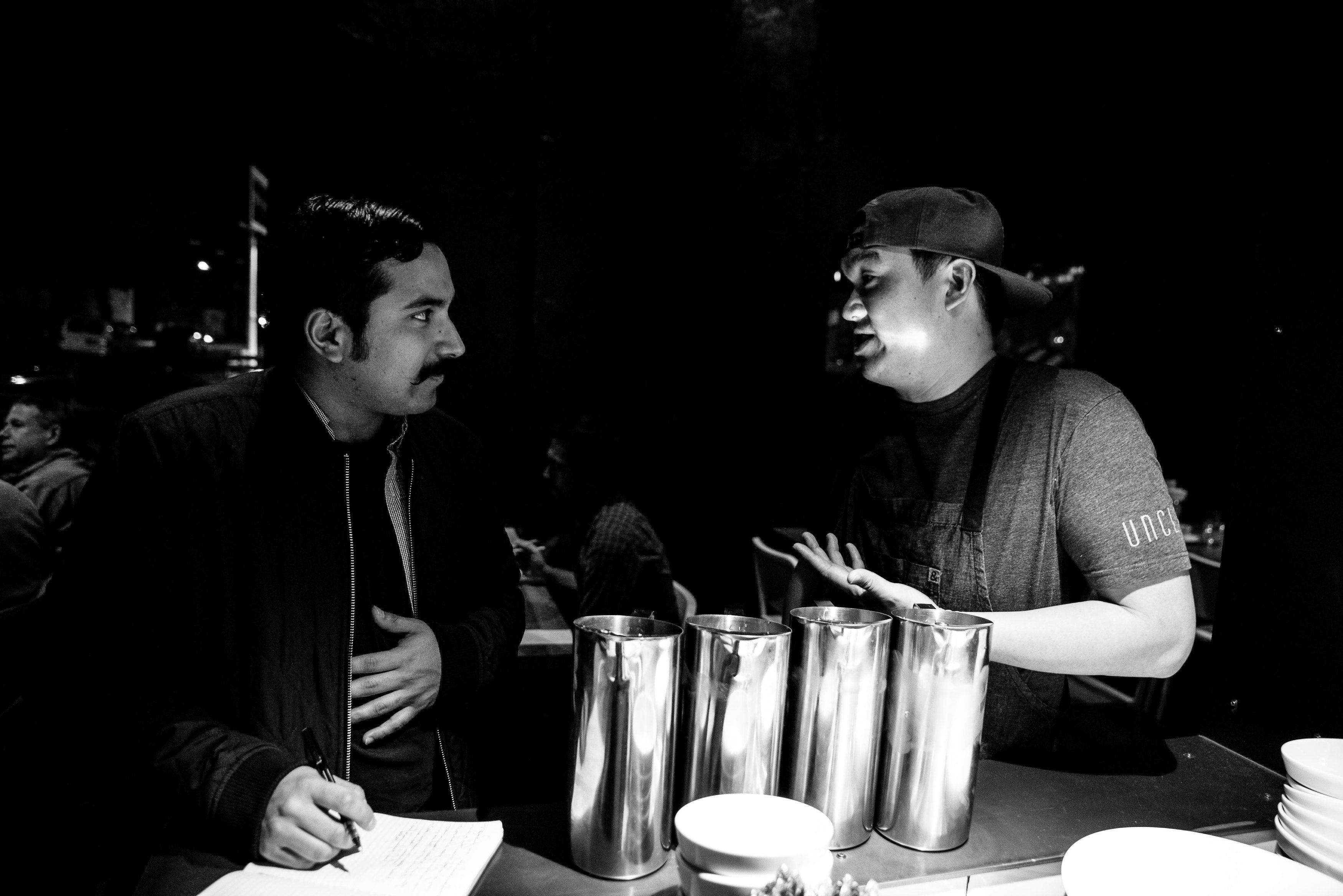 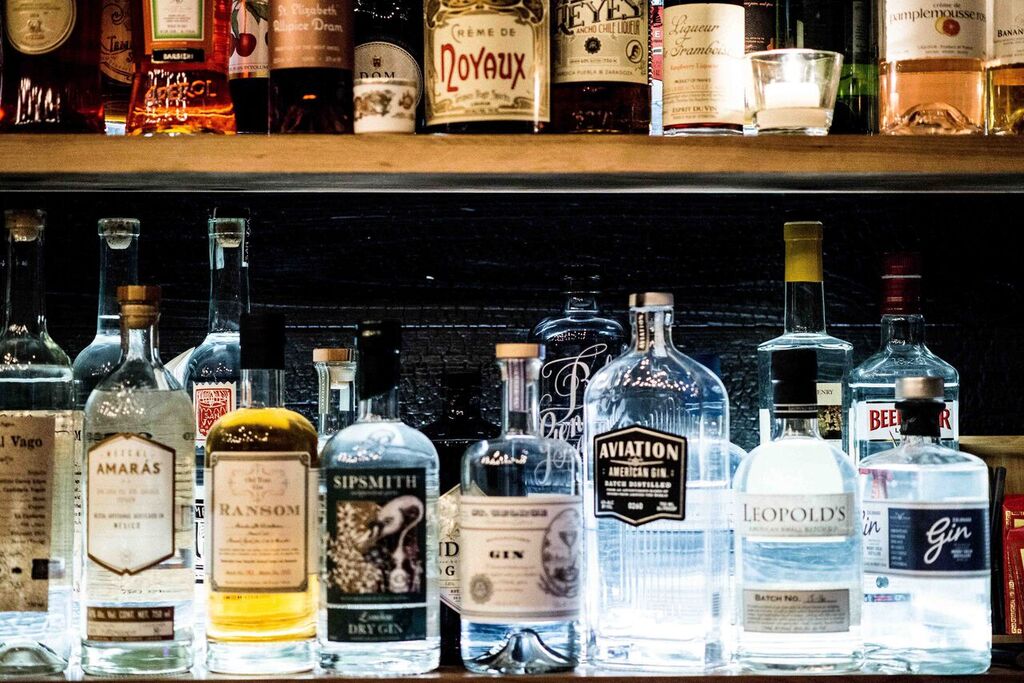 Another defining trait of Hop Alley is its bar program featuring extensive wine and cocktail lists from Matt Mulligan and Kam Mataraci. Next week, a beer brewed exclusively for the restaurant by RiNO neighbors, Our Mutual Friend Brewing Company, will be added to the menu as well. 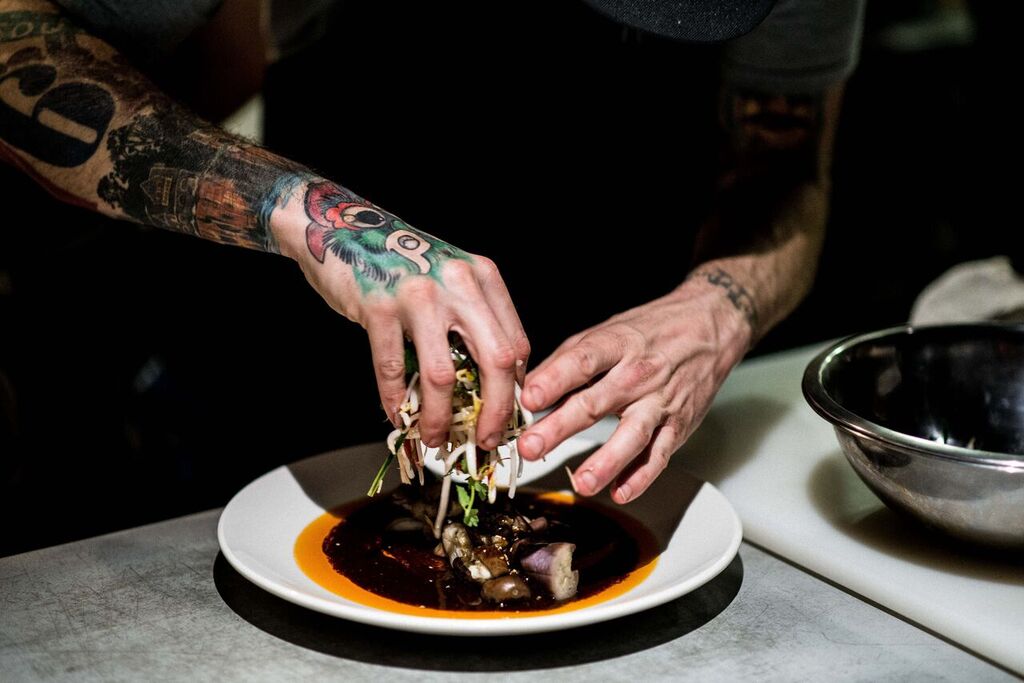 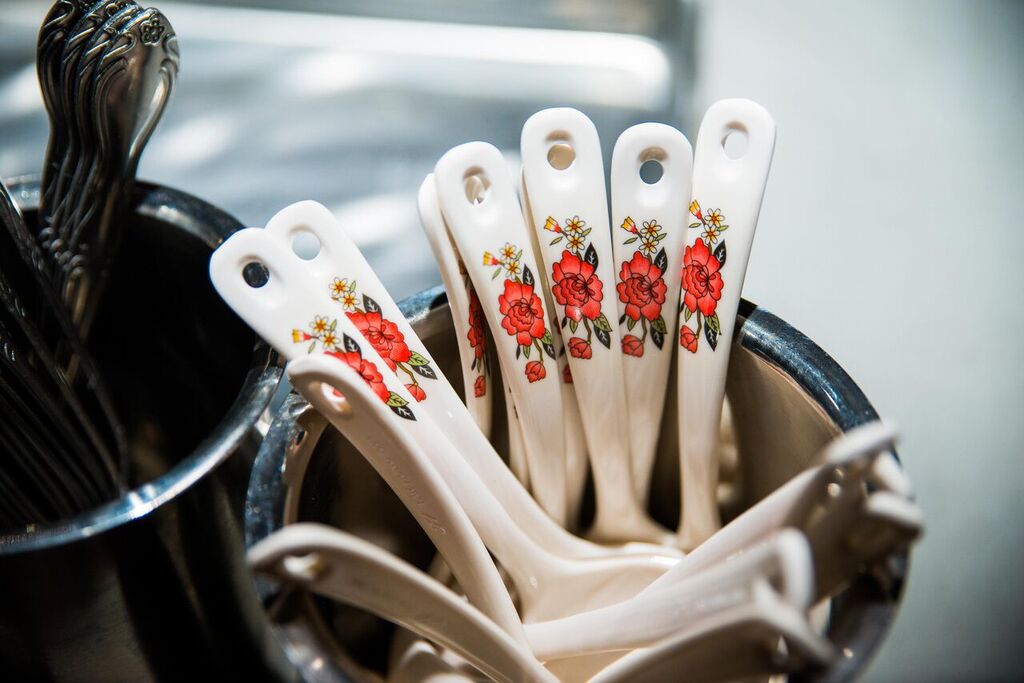 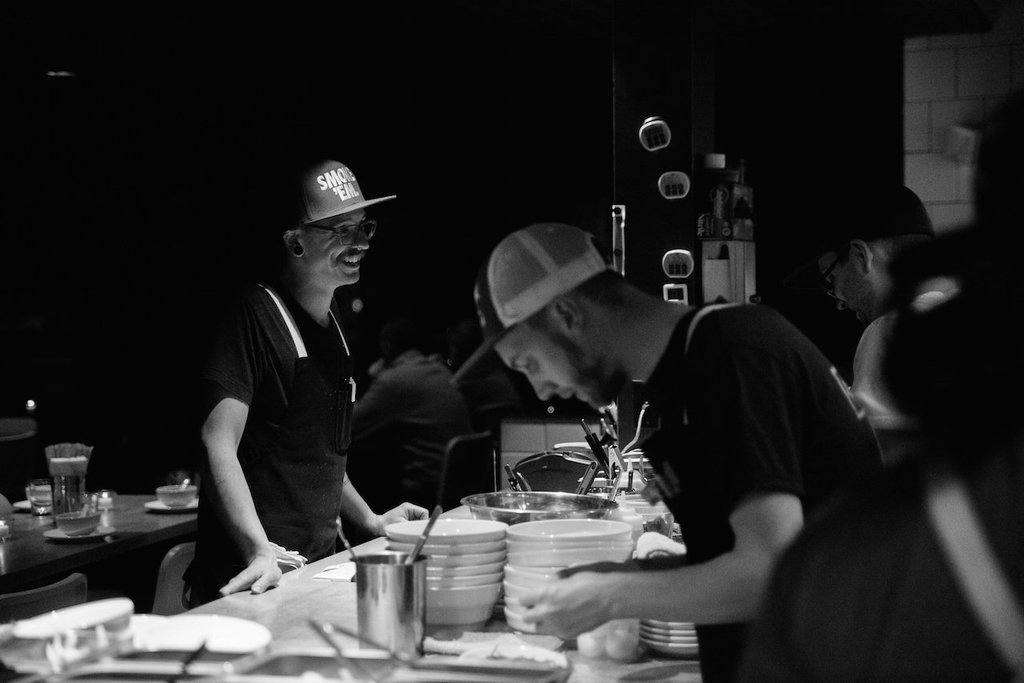