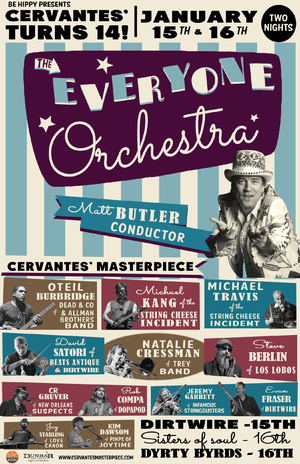 Cervantes’ turned fourteen this weekend and everyone was there to celebrate. The Everyone Orchestra is an ever-rotating super group that partakes in intentional, yet improvisational, jam sessions, as conducted by the lively Matt Butler and his technicolored tail coat (with matching top hat).

I’ve seen the Everyone Orchestra on several occasions and still can’t really figure out if Matt Butler is actually playing an active role in the evolution of the music from song to song or if the band is just doing what bands do — reading and listening, vibin’ off one another’s energy, organically transitioning from one sound to the next. Are Butler’s erratic dance moves, enthusiastic gestures and phrases frantically scrawled onto dry erase boards, in fact, directing the setlist? It’s probably a bit of both. But what do I know? Regardless, his influence is greatly felt by the crowd. And he must be doing something right, to be allowed to assemble such a diverse team of expertise on stage and engage them all together in a set of his very own making.

Butler manipulates the energy of the Everyone Orchestra into an unpredictable, chaotic blend of fun. Often, the musicians don’t know each other and don’t know what to expect until they get up there on the stage. While there aren’t any rehearsals, there is a conductor. He makes the magic happen.

Check out this video to learn more about Matt Butler and to hear the perspective of the revolving menagerie of musicians that Butler has sucked into his whirlwind of the Everyone Orchestra:

The highlight of last night’s set was a song called “Trump, You Suck,” as sang by Natalie Cressman and led by saxophonist Steve Berlin (Los Lobos). This jaunty tune reminded me of something by the Squirrel Nut Zippers, bouncing around with heavy horns and a quick swingin’ melody. It was certainly the most unique (and well received) ballad of the night, deviating from the otherwise jammy, bluegrass and funk infused tracks that dominated the rest of the show.

Check out this pretty decent Youtube video of “Trump, You Suck.”

Butler made sure to graciously thank Cervantes’ and their staff, complimenting them on their consistent, generous and good natured treatment of the artists that pass through their venue. He claimed that, because of Cervs’ staff, this was one of the most fun venues to play at. I think the audience could safely agree with Butler’s praise: Cervantes’ is always one of the best places in the city to watch a show and get your groove on. The concerts always get away from themselves, usually ending closer to 3am… because that’s just the way it goes there. The party is over when it’s over, and not a minute sooner. The smiling and benevolent crowd is made up of dreadlocks and afros, fedoras and flat brims, hippies and hellions. Cervantes’ caters to everyone, making the Everyone Orchestra the perfect band to celebrate its anniversary.

(But they didn’t cover any Bowie.)

** Oh, and it should certainly be noted that Denver’s own Dyrty Byrds played an hour and half opening set. And they totally rocked it. As in, good old fashioned, southern fried rock n’ roll. They’ve got sort of an Allman Brothers, Radiators and Widespread Panic feel to them. If you find yourself in Summit County over the next few weeks, you can catch them at Barkley Ballroom (Frisco) on January 30 or the Goat (Keystone) on February 19. They’ll be back in the Front Range on March 19 at the Oriental.

Have a listen to Dyrty Byrds’ latest album, Zeitgeist: