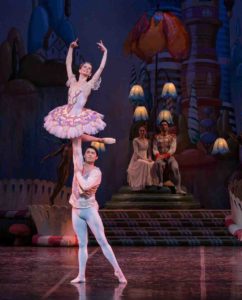 As the holiday season embarks, you begin to feel the magic of what the season beholds in the air. The story of The Nutcracker is nothing new, however, it is the story that intertwines with exuberant dancers, their costumes, the sets and the music that brings with it childlike wonder and amazement to the young and old.

The Colorado Ballet, the orchestra and entire crew involved with The Nutcracker make the magic of the story come alive. And, there is no time to waste because for many this is an annual tradition and tickets go fast. The Nutcracker began the weekend of Thanksgiving and continues through to December 27. I had the honor of attending with my husband who was experiencing The Nutcracker for the very first time. While he may have known the story there was no way for him to know what breathtaking enchantment would unfold in front of him. 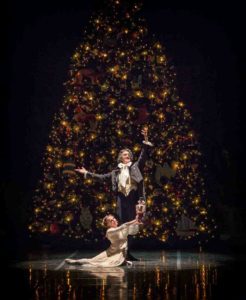 Let’s refresh your memory of the story. Act I: Clara Stahlbaum’s parents throw their annual Christmas Eve Party. “The magical and eccentric Herr Drosselmeyer has planned a special surprise for his beloved godchild, Clara. He presents her with a wonderfully mysterious wooden Nutcracker.”

Clara’s brother Fritz becomes jealous of the gift to Clara and steals it from her and in the chaos of tormenting his sister, he accidentally breaks the Nutcracker. Herr Drosselmeyer breaks up the entanglement and assures Clara that the Nutcracker will be alright.

The party has ended. Guests have left and just before the stroke of midnight Clara returns to the living room to check on her Nutcracker only to be frightened by large mice that chase her around. Herr Drosselmeyer appears seemingly out of nowhere and the mice flee. Herr Drosselmeyer then commands the Christmas tree to grow. He then changes her little wooden toy into a life-size Nutcracker. The Nutcracker then introduces himself and his soldiers to Clara. 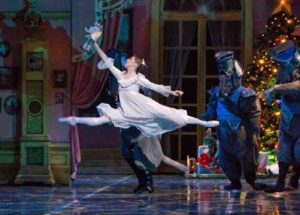 The mice reappear and a battle ensues. The great Mouse King and the Nutcracker fight. The battles are vicious and just when you think there is no hope and the large mice will be victories, the tables turn.

The magic continues and to Clara’s surprise “the Nutcracker is transformed into a handsome young prince, who takes her off on an enchanted journey.” 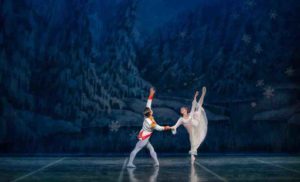 Act II: The young prince takes Clara to the Land of Snow and then onto the Kingdom of the Sugar Plum Fairy where they are entertained by dances from many lands. The Colorado Ballet dancers take the audience on a thrilling showcase of athleticism and grace that is beyond words. For the Saturday, November 28th performance that we attended Maria Mosina and Alexei Tyukov were in the role of the Arabian dancers and they were truly breathtaking. Whether they continue in the role for the rest of the performances is worth finding out.

All of the Colorado Ballet dancers take the audience on such an incredible journey that you shouldn’t let the magic of the season pass you by. Make The Nutcracker part of your annual traditions; it is beautifully composed and fun for the entire family. 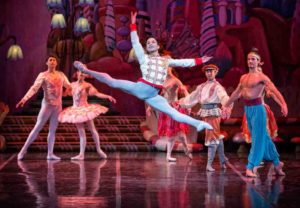 Here are the remaining performance dates and times as of 12/3/15:

Please also visit www.coloradoballet.org for an updated list of availability as well as purchasing tickets on-line.

May this holiday season greet you with warmth and beauty…. just like attending The Nutcracker did for us. 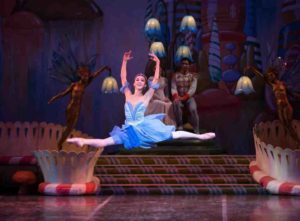 Please Note: Some Quotes and information were gathered from the performance booklet and the Colorado Ballet website.