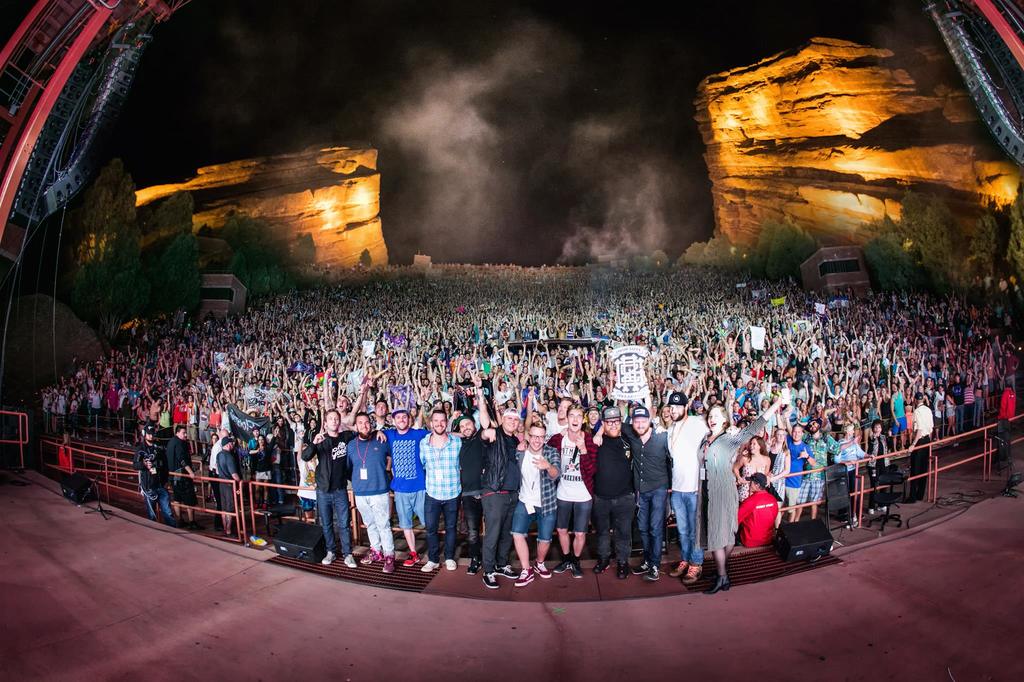 Only select musicians have the opportunity to play at Red Rocks. Of those few, most will only play there once, while even less get the chance to consistently play one of the most prestigious venues in the country. Last Friday a young musician named Grant Kwiecinski, also known as “Griz”, took his chance and headlined his first ever Red Rocks show. Originally from Detroit, Kwiecincski now resides in Boulder, where he can combine his soulful roots with the electronic culture of Colorado. Still outshined by industry veterans like Pretty Lights and Bassnectar, Griz faced the challenge of filling the canyon with nothing but his saxophone, mixer, and a select few tracks.

Leading up to the night, Griz did not treat the event as just another stop on tour. He showed respect for the venue by pointing out how honored he was for headlining and selling out Red Rocks.

The night began with three names featured from Griz’s own All Good Records, Muzzy Bear, Manic Focus, and The Floozies. All three set the tone for the night ahead by using live drums and guitars mixed with that heavy bass that so many have become thirsty for.

As Griz walked out on stage the sun began to set and the rain began to pour as if on purpose. Bringing forceful, yet tasteful bass to start, he continued an onslaught through the many styles he has to offer. His popular “electro soul” songs, as he calls them, like “Good Times Roll” and “The Anthem”, contained drops of pure saxophone and bass, sounds that Griz has essentially patented and popularized. The middle of the set calmed down (relatively), with classics such as “Play That Funky Music” by Wild Cherry and “Superstition” by Stevie Wonder, all altered just slightly to fit the dancing environment. Throughout the set Griz brought on guests of his own like guitarist Muzzy Bear, and vocalist Jessie Arlen, who helped add to the soulful spectacle. But Griz could not finish without giving the crowd every taste of music he had to offer. He played heavy tracks like “Rock the Party” by Jauz, and his own “Too Young For Tragedy”, leaving many confused and sweaty, somehow in the best way possible.

When you combine a fresh young artist with their first Red Rocks headlining spot, it’s hard to get a bad performance. The roller coaster of emotions Griz took the crowd on is a testament to how much the show meant to him. “Last night we were family! Absolutely in tears” he wrote the next day. We have yet to see if he will play an annual show and begin a Red Rocks “dynasty”, but the stars seem to say he will. There is no doubt Griz brings something unique to the table that most other DJs and even bands cannot. Combined with his love for Colorado, and Colorado’s love for him, I foresee Griz becoming a very familiar face at Red Rocks Amphitheater for years to come.