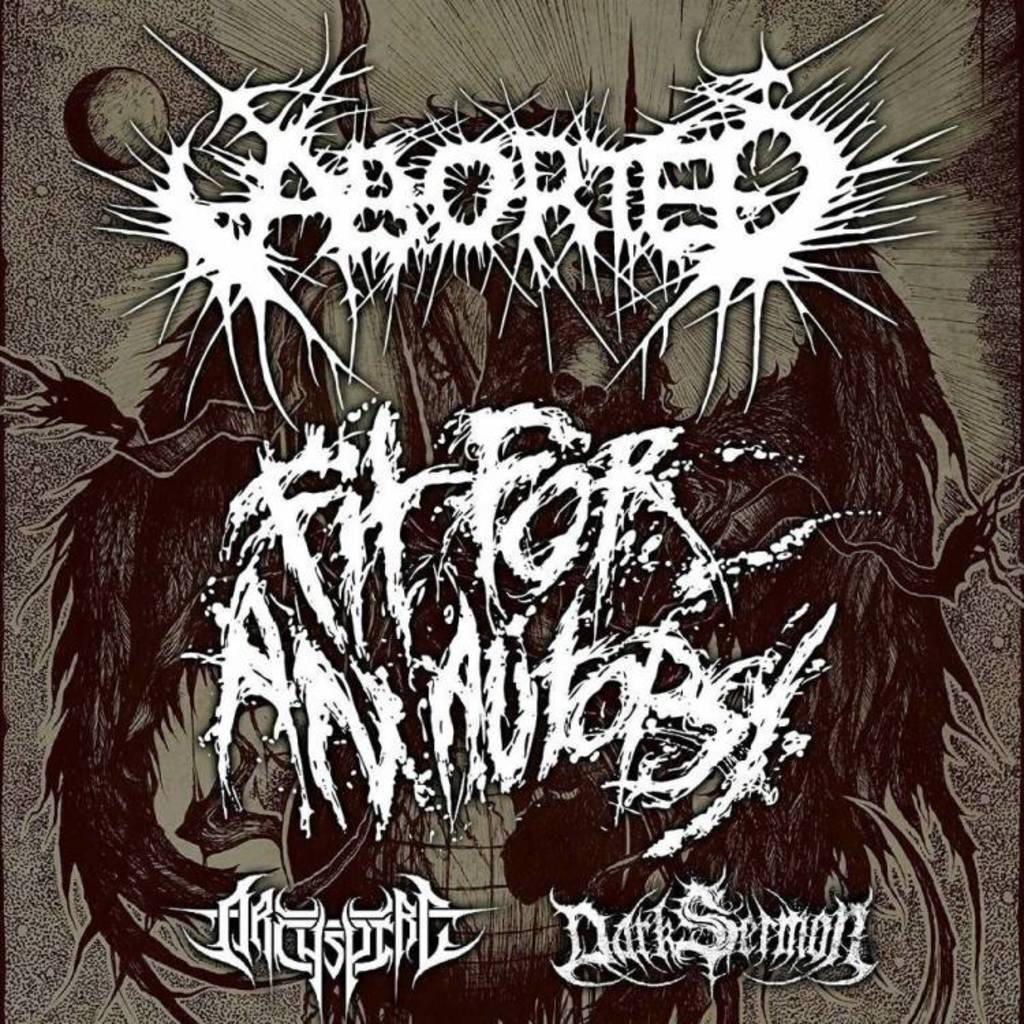 For being a genre that the mainstream music culture hardly even recognizes, death metal is very much alive and well. The packed Moon Room at Summit Music Hall on May 19 was ample proof of this when Belgian death metal masters Aborted steamrolled through Denver headlining an absolutely stacked, who’s who of death metal bill featuring Fit For An Autopsy, Archspire, Dark Sermon and local mainstays Vale of Pnath. 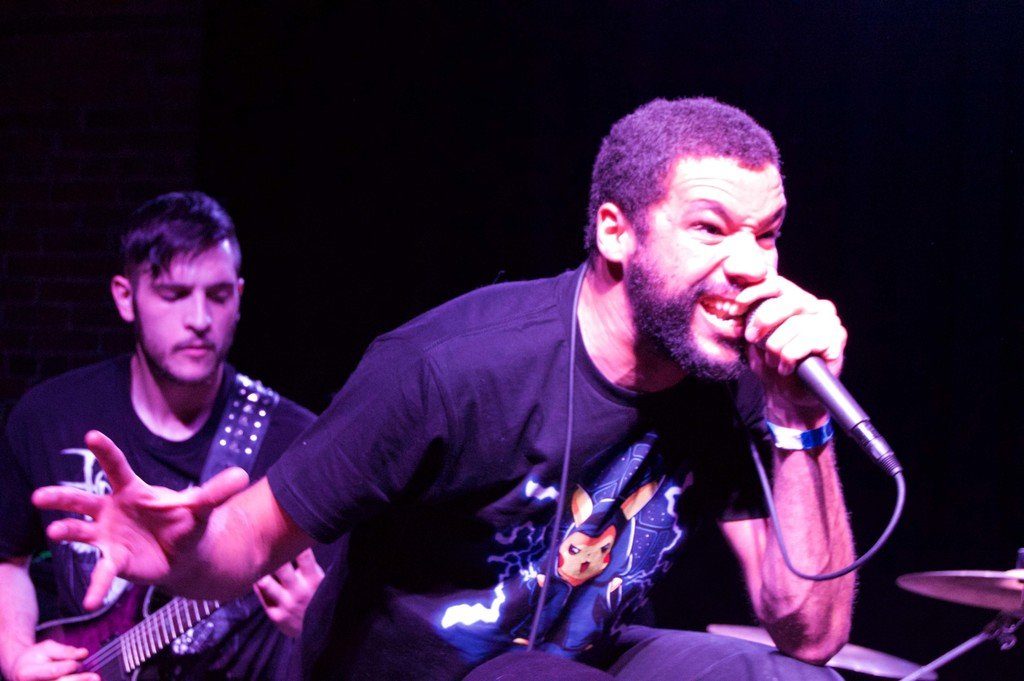 Vale of Pnath performs lives at The Moon Room on Tuesday, May 19. Photo by Aaron Lambert

The insane, technical shred of Vale of Pnath opened up the night, acting as a primer for the sonic chaos that was to ensue. The entire band displayed spot-on individual performances and were super tight as a unit to boot. It’s hard to believe that these guys only have one album under their belt, because they play and write music that’s on par with some of the biggest names in the genre. Luckily, they’ve been hard at work on a new album and proved their progress by incorporating a few new jams into their set list, each of which sounded absolutely fantastic. Overall, Vale of Pnath opened the night with a bang and represented the talent and adeptness of the Denver death metal scene. 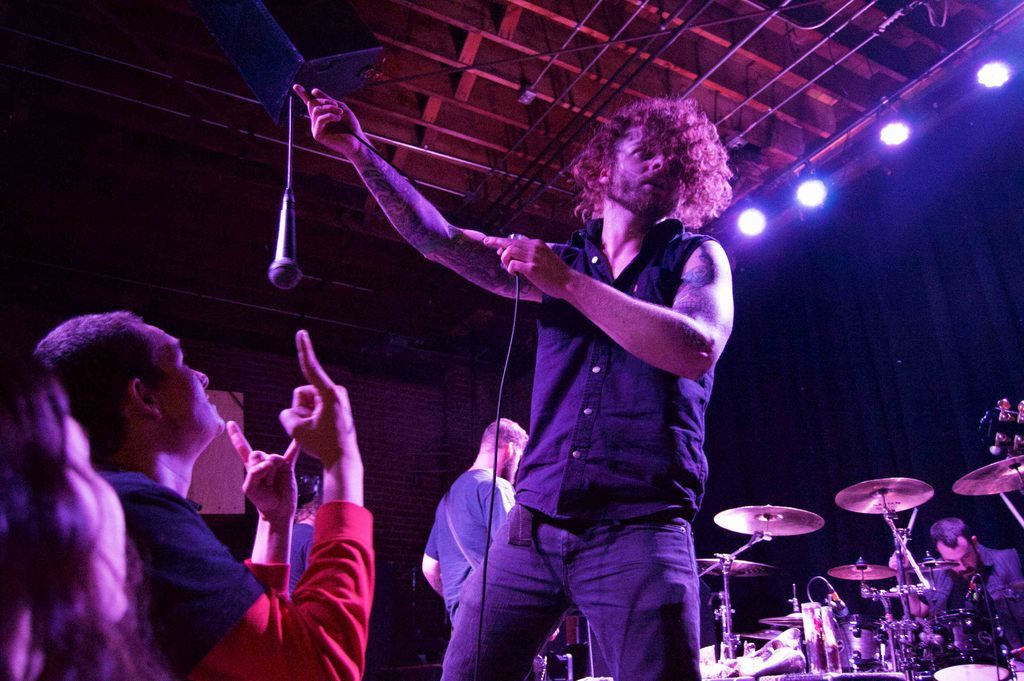 Dark Sermon performs live at The Moon Room on Tuesday, May 19. Photo by Aaron Lambert

When Dark Sermon hit the stage, they brought with them an altar, atop which sat wax candles and an animal skull of some kind, and in front of which Dark Sermon vocalist Jonny Crowder kneeled before their performance and appeared to have prayed to. It seemed odd at first, but it became apparent that the altar was as much apart of Dark Sermon’s intense and emotional live performance as the guitars and drums were. This up-and-coming blackened melodic death metal band put on an insane live show, and Crowder was the focal point the entire time. He is quite an eccentric and passionate frontman, and at various points in Dark Sermon’s performance, he ended up lying down on the floor of the stage and grabbing crowd members’ heads and bobbing them along to the music. His untamed stage presence coupled with the band’s razor-tight performance made them a highlight of the evening. To an outsider, Dark Sermon would seem to perpetuate the “evil” stereotype that death metal so often falls into, but to those in attendance that night, it was an unbridled display of the violent fury that draws to death metal those who understand it in the first place. 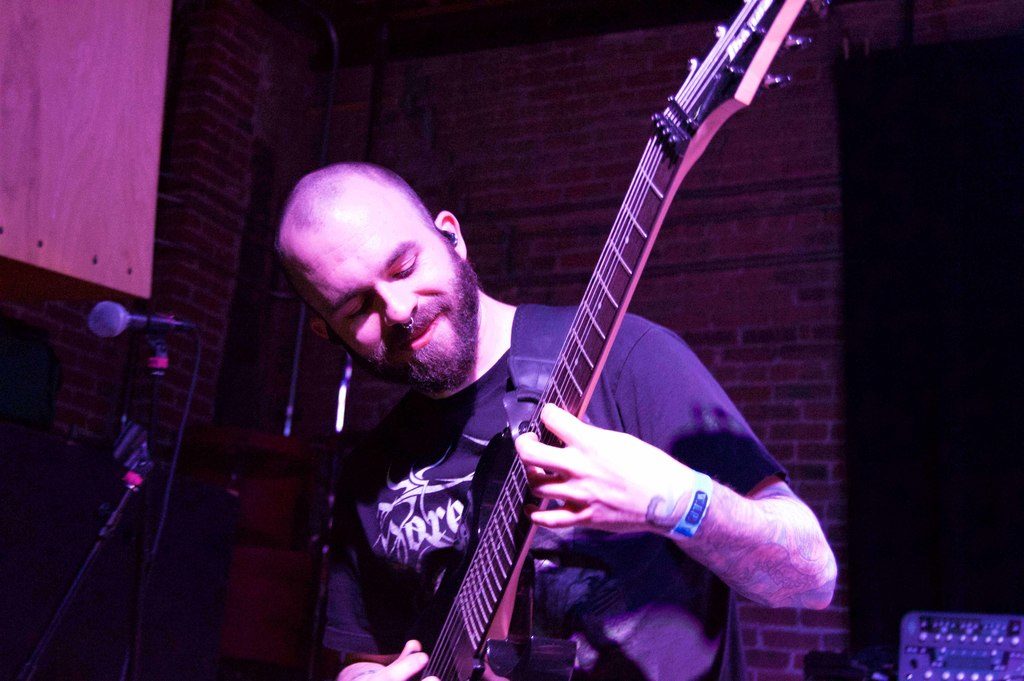 Archspire performs live at The Moon Room on Tuesday, May 19. Photo by Aaron Lambert

Adding to the diversity of this bill was Archspire, an unbelievably technical death metal band that has to be seen to be believed. Last year’s The Lucid Collective was heralded by many metal blogs and death metal fans alike, and their performance on this night proved that these crazy Canucks are truly virtuosos of their respective instruments and need not rely on any studio wizardry to enhance their own. They opened with the crushing riffs of “Scream Feeding” before breaking into a face-melting display of frantic guitar acrobatics, blast beat endurance tests and guttural rapping that miraculously lasted for the duration of their entire set. It was like watching a Richard Simmons exercise video in death metal calorie burning. What made their set even more entertaining was the fact that these mad scientists have a lot of fun while they’re playing. Sure, they have to focus intently in order to nail certain…ok, pretty much every musical passage they played, but the dirty jokes cracked by vocalist Oliver Rae Aleron between songs and the devious smiles from 8-string guitarist Dean Lamb and bassist Clayton Harder proved that they don’t take themselves too seriously, which is a good thing. 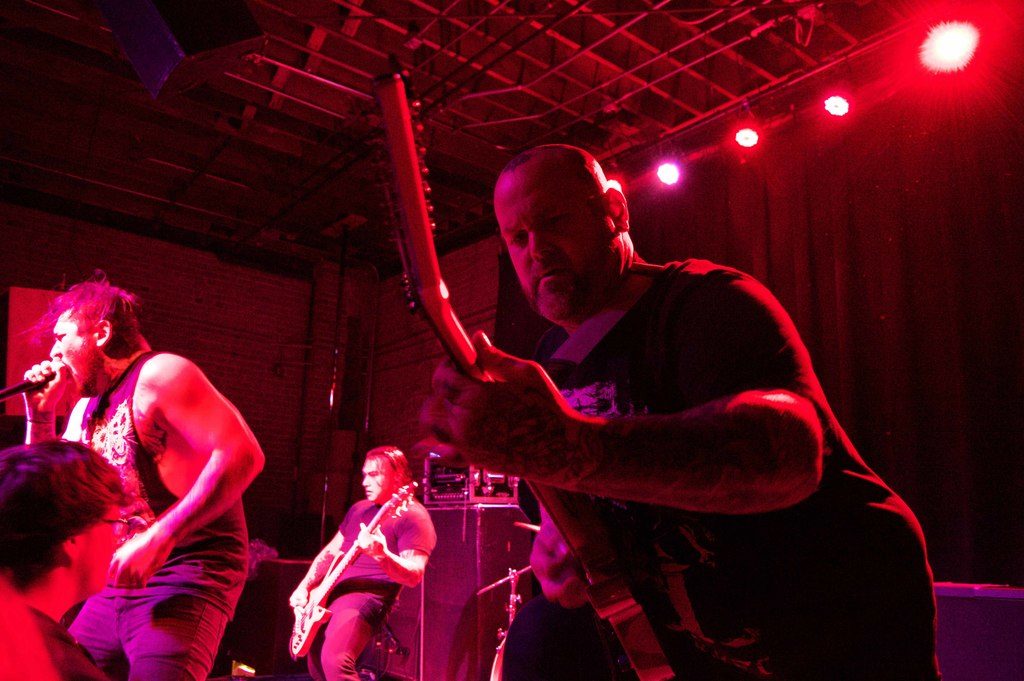 Fit For An Autopsy perform live at The Moon Room on Tuesday, May 19. Photo by Aaron Lambert

Fit For An Autopsy, on the other hand, take themselves very seriously, and they didn’t let out even a grin one time during their breakdown-heavy, mosh pit-inducing set. They blasted through cuts from their 2013 album Hellbound  as well as their 2011 debut The Process of Human Extermination, and they even played a new song from their forthcoming album set to be released later this year. On record, these guys are absolutely killer, but they were a bit underwhelming in a live setting. Granted, the crowd seemed to be very into them and the style of deathcore they play is much more interesting than the majority of bands in the genre right now, but compared to the other bands on this bill, their live show just wasn’t up to par. This became even more true once Aborted hit the stage. 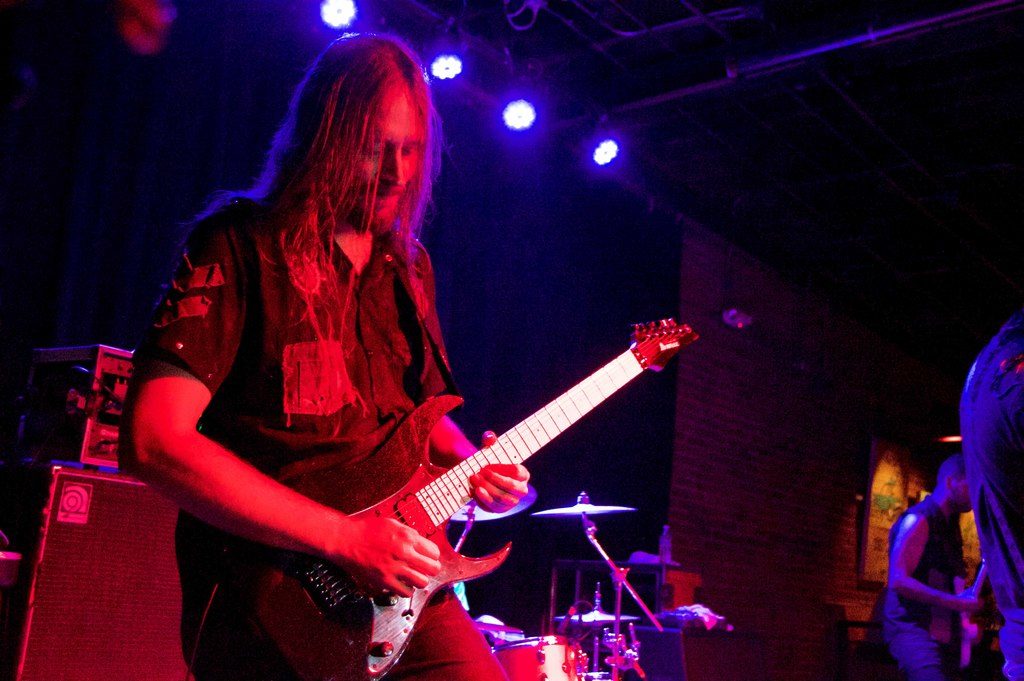 Aborted perform live at The Moon Room on Tuesday, May 19. Photo by Aaron Lambert

When it came time for the main attraction, it became clear that most people were there to see Aborted. These Belgian deathbringers have been a mainstay in death metal for 20 years now, and they’ve only gotten better with time. They kicked off a career-spanning set with the classic “Meticulous Invagination,” and the room immediately exploded into a cacophony of insanity that didn’t let up until Aborted played their very last note. 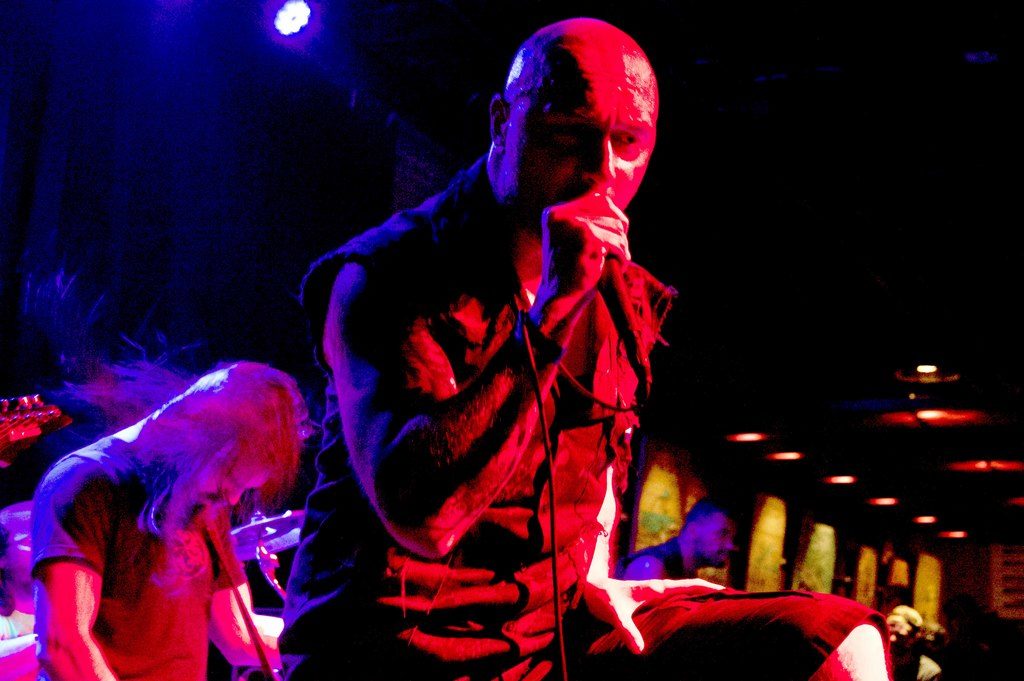 Aborted perform live at The Moon Room on Tuesday, May 19. Photo by Aaron Lambert

The band itself was spot on, delivering a super-tight performance that was intense from start to finish. Guitarists Mendel bij de Leij and Danny Tunker dazzled with their impressive guitar acrobatics and decapitated with their chunky, destructive riffs, and despite playing on a smaller kit than he usually does, drummer Ken Bedene still sounded huge and played like a bionic drum machine. Their incredible performances were overshadowed only by frontman Sven de Caluwe, who is a true force to be reckoned with live. He possesses an innate and downright terrifying command of his own gutturals as well as the crowd, and his ability to act like a madman through Aborted’s whole set without stopping for a breather is nothing short of inhuman. Aborted and company proved that death metal is still thriving, and its fans are more devoted and passionate than those in any other genre of music.

All words and photos by Aaron Lambert.