Pro: Excellent selection of dark beers in a well-designed (and dog-friendly) space.

Con: While the lighter selection of beers are good, they pale in comparison to their darker counterparts.

Nestled in a large building along steadily growing Larimer Street, Ratio Beerworks has all of the space and skill needed to become a very popular brewery; and luckily, the owners have lofty goals. Zach Lowery, one of three proprietors, explained how the name for Ratio Beerworks comes from the idea of achieving a golden ratio of flavors in their beers, but could also explain the unique combination of owners. Coming from different walks of professional life, the three owners have put their unique skill sets towards finding the best ratios of flavor in their beer, and using their business skills to stand out in the micro-brewery market of Denver. 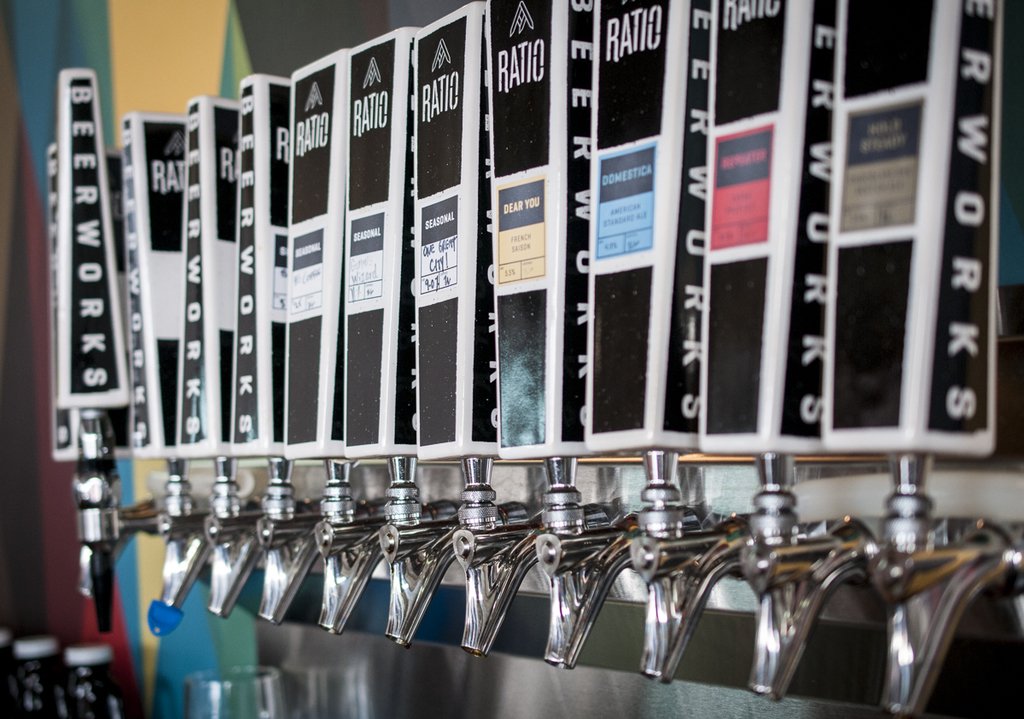 The three brewers met and bonded over their youthful interest/careers as punk rockers. All three were picking up the art of home brewing, alongside guitars, drums, and a rebellious attitude. With more than just an interesting past, each of the owners also brings a unique set of business skills to the table of their budding brewery.

The two owners most strongly representing the business side of Ratio Beerworks are Lowery along with Scott Kaplan. Lowery used to own a record label, and has a further background in marketing. Kaplan handles a lot of the business operations. Kaplan also is the man responsible for bringing the members of Ratio Beerworks together, as he knew both Lowery and Kaplan through the punk rock business.

The third owner, Jason ZumBrunnen, was in a band known as The Fairlanes, and has also undergone extensive schooling in both the United States and Germany. Perhaps it was during one of the cold winters in Germany that ZumBrunnen’s interest in dark beers bloomed, maybe as more of a necessity, than a luxury. Either way, the knowledge is there. Take one sip of a Russian imperial stout, or Scotch style stout, and it becomes clear that flavor is something special for Ratio Brewery. 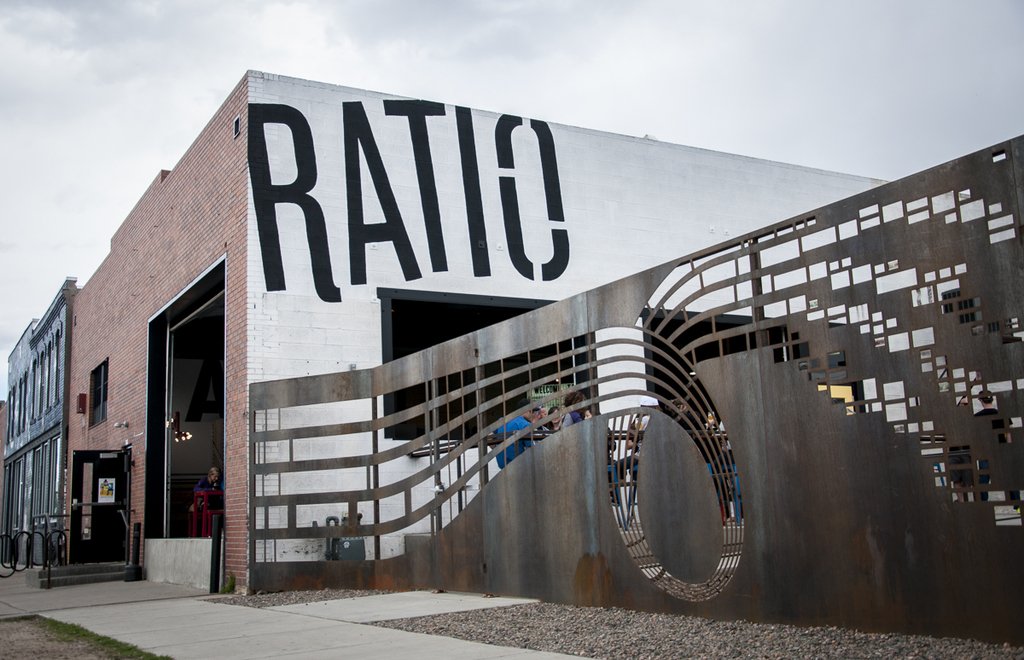 “Finding the right location is one of the hardest parts of opening a brewery,” said Lowery, “But this neighborhood is definitely blowing up. There is a bar across the street, and several other breweries already established around us.” The constant sound of cars along Larimer street and almost impossible task of parallel parking anywhere near the entrance to Ratio Beerworks, backed up Lowery’s claims.

Set in a building that is similar in size to an airplane hangar, the inside of Ratio Brewery is huge. A latticework of large arches covering the ceiling, tower high over the heads of drinking patrons, and extends far behind the façade of a wall that separates the brewery area from the drinking area. A pair of mysterious glass doors allows the drinker a glimpse into the brewing area, with large stainless steel kettles, and occasionally, the head brewers/owners hard at work.

The walls are adorned with striped and intricately connected geometrically shaped patterns that give the place a new-age retro feel. Large tables, still shiny with new lacquer, dominate the room. Garage-styled, rollaway doors give the drinking area fresh open space, and lift up to reveal a large patio area on the side of the building, as well as Larimer street through the front doors. Ratio Beerworks is also dog friendly, so bring your best friend, as well as your humans. 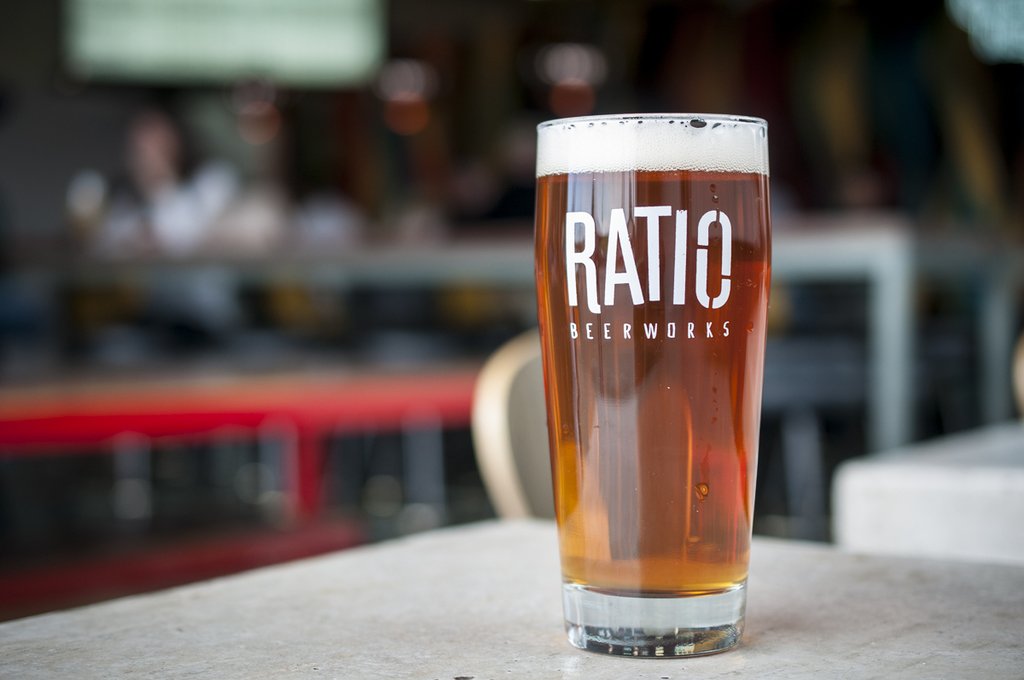 Hold steady Scotch ale (7.5 percent ABV): A deliciously creamy and rich dark beer, that hits the Scotch ale flavor profile perfectly. Not much to the nose, but the flavors of chocolate and hints of sweet fruity flavors mingle with a subtle smokiness. A must try for those who love Scotch ales.

Novo hold steady, dark Scotch ale with coffee(7.5 percent ABV): The nose of this beer isn’t very strong, but contains just enough smell of coffee to make a drunk man sit up straight. A heavy body profile has the same sweet flavors of fruit held by its brother hold steady, but with the delicious rich flavors (and slight kick) of coffee.

Genius wizard, Russian imperial stout (11 percent ABV): It is hard to hide such a high ABV behind the light curtain of sweet beer flavor, but genius wizard is an intelligent beer. The dark body profile of of this beer has dense flavors that hint at chocolate and the sweet flavors of fruit. In our opinion, this was by far Ratio Brewery’s best beer, and it would be worth trekking from anywhere across Denver, just to try a pint.

Ratio Brewery’s selection of dark beers are definitely the best thing on tap (at least we think so), but it also offers a variety of lighter beers as well.

Domestica, American ale(4.9 percent ABV): Ratio’s light beer, designed for easy drinking and simple flavors. This beer is very crisp and light, has a hint of light caramel flavor, balanced by the bitter flavor of hops. It is a great beer for a hot summer day.

Dear you, French saison(5.5 percent ABV): This beer is a unique take on the saison, with the addition of American style hopping. Floral in the nose, this beer is light in flavor, with a taste of bread, and finishing flavors of citrusy hops.

One great city, Belgian quadrupel(9 percent ABV): This beer has plenty of sweet flavors in the body, most notably the candy note that Belgian quadrupel’s are known for. It is a great beer for the spring.