Pro: An approachable and affordable menu that goes beyond its full flight of ramen bowls and into a well thought-out selection of small satisfying plates. The chicken kara age, Osaka’s take on fried chicken, is bound to be a signature dish.

Con: If you’re expecting an experience similar to Twelve, you’re likely to be disappointed.

Chef Jeff Osaka has worked in fine dining for over 20 years — that is until he closed his famed Denver restaurant, Twelve, last August. Now Osaka, known for his seasonally driven-cuisine (which garnered him a nod from the James Beard foundation), is finally ready to embark on an entirely different endeavor. And he isn’t thinking small. 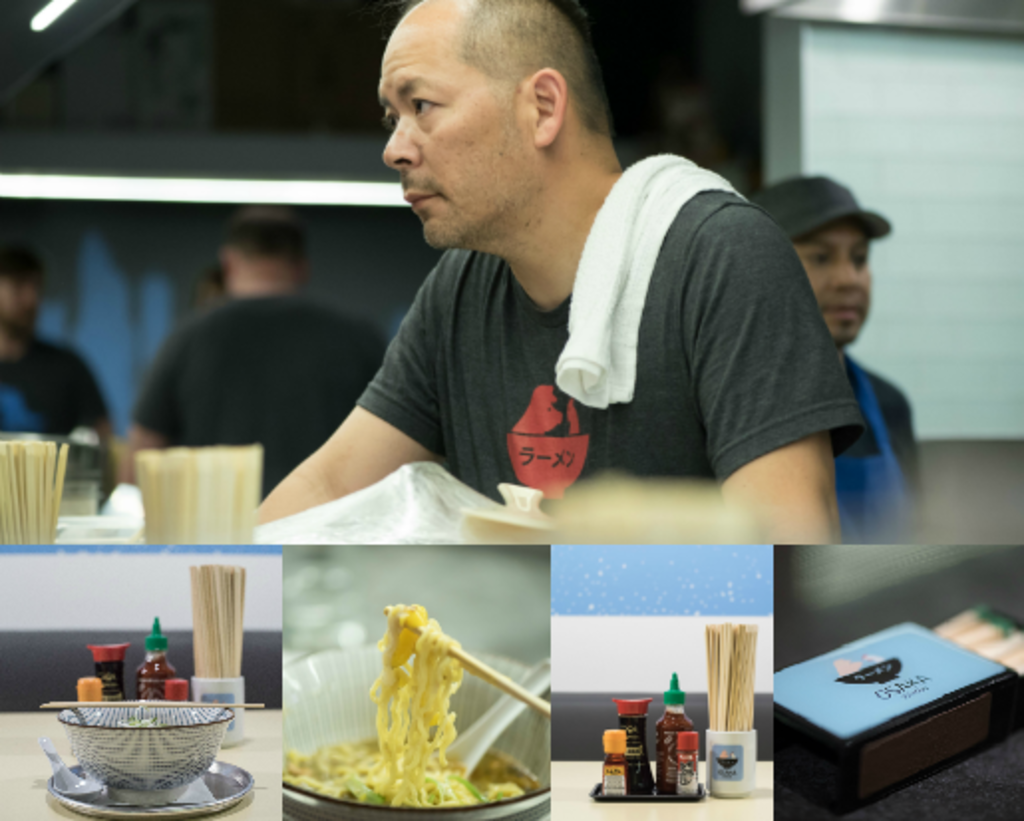 Osaka Ramen, a 70 seat “upper-casual” restaurant (as Osaka himself would call it), is set to open in RiNo next week. The concept deviates sharply from the chef’s background in French technique and focuses primarily on Japanese influences with a menu centered around ramen. But despite this surprising decision to shift practices, Osaka says he planned on opening a ramen joint since he first moved to Denver:

“I’ve had these recipes for almost six years… but if I did it then I would have been shut down,” he explained. But now, with a ramen boom exploding in Denver, this new restaurant isn’t necessarily setting a trend. Rather it adds to a line-up of noodle-bowl loving eateries that are taking over the city — and Osaka not only wants to join in, it seems he wants to dominate it.

“We’re treating this as something we can duplicate,” he said. With a second location in the works to open in Cherry Creek this summer and maybe a third location (potentially DU area), Osaka plans to take this concept to a larger scale. In addition, Osaka also has another restaurant on the burner in the form of Sushi-Rama a “conveyor-belt-centric” sushi joint opening late summer/early fall 2015 along with a marketplace in the H.H. Tammen building coming this fall 2o15. All of which will be located in the stretch of RiNo between the 2600-2700 blocks of Walnut and Larimer. As for Twelve, Osaka says he is still considering re-opening it, but “not at the moment.” 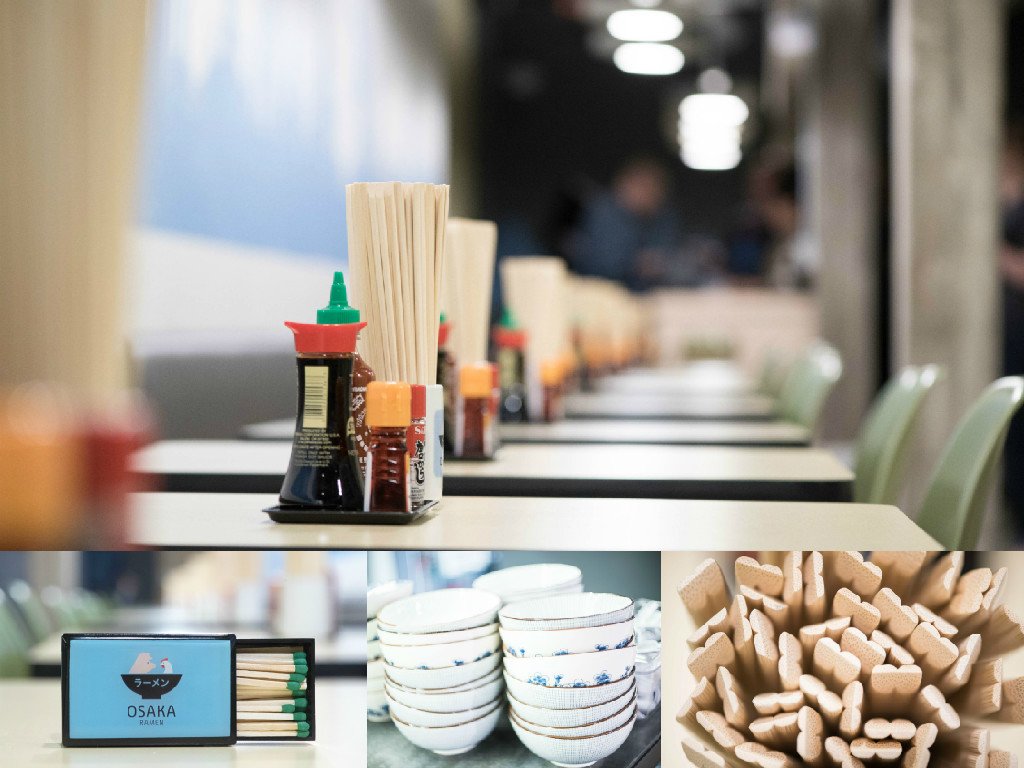 Located in the subterranean space off 26th and Walnut, Osaka Ramen feels less like a swanky hideaway and more of a pit stop in a subway station — but that’s not necessarily a bad thing. The long dark staircase that takes you into the belly of the flat brick building might trigger memories for any urban commuter who’s familiar with the bowels of a metro station. This, coupled with plasticized accents and graphically designed menus and logo (fittingly of a pig and chicken stewing in a bowl), makes Osaka Ramen feels like it belongs in a bustling Japanese metropolis —but in slightly neutralized Americanized way (it kind of feels like a food court). Overall it doesn’t take itself too seriously, Osaka even mentioned that they created a storyline for the Godzilla stenciled to the wall, terrorizing a baby blue Tokyo skyline. “He’s look for his RA-men,” he explained.

Various seating options are available including a 17 seat community table, a chef’s counter and a stretch of two tops. Like traditional ramen places, a quick turn-around is expected. 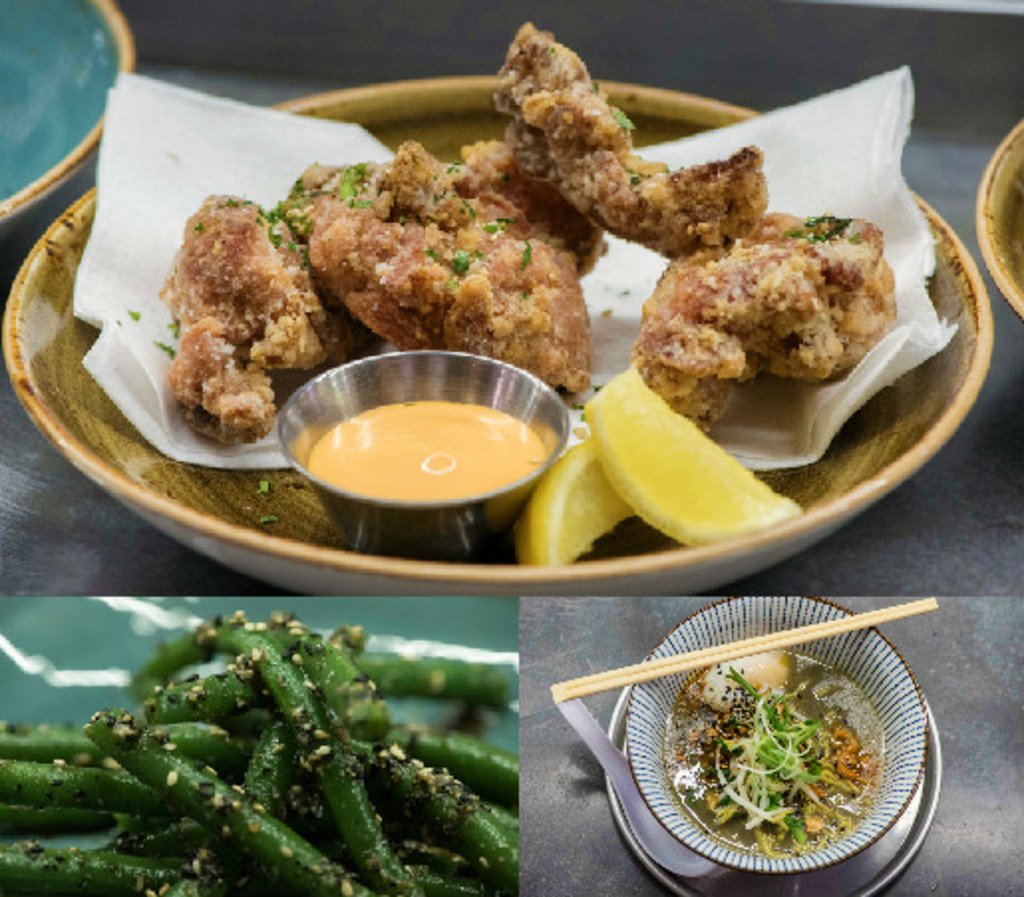 The menu at Osaka Ramen kicks off with five ramen offerings ($14). The list includes shio & shoyu bowls both served with pork shoulder in a chicken broth, a vegetable ramen made with a Thai-green curry broth, a spicy miso served with spicy pork and the tonkotsu, what Osaka calls “the grand daddy” of the menu, made with an all pork broth (simmered for 24-36 hours) served with pork belly. All ramens comes topped with a soft boiled egg and are made with cult favorite, sun noodles (of which Osaka says are delivered “fresh” i.e. every week). As for Osaka’s favorite? The shoyu because “it’s a bit lighter.”

The menu also features a collection of bento boxes ($14) —chicken, beef, tofu and bass are your choices— and small plates. The small plates are inspired by dishes Osaka’s mother use to make for him at home and range from $3- $7. The selections are comforting but simple like Okonomiyaki Fries ($6) made with shoestring cut potatoes, drizzled in tangy yak/kewpie mayo, topped with delicate bonito flakes that wildly twist and curl like tentacles when met with the heat of the fries. Green beans ($4), reminiscent of a traditional sushi chef salad, comes sprinkled with sesame seeds and glazed in a soy-sesame dressing. Simple and clean, it is great for a lighter option. The standout, however, has to be the chicken kara age ($7). This take on fried chicken is marinated in a citrus-soy blend then quickly fried in a rice-bran oil and served with a secret sauce and a lemon wedge. The result is a crispy, tender chicken with skin that dissolves the second it lands in your mouth. It’s everything you want fried chicken to be, but nothing you’d expect. Pro tip: to experience this dish in all its fully fried glory, sit at the chef’s counter where it’ll mostly likely be pulled straight from the fryer and put onto your plate.

In terms of the booze, the drink menu is mainly wine-centric with a dozen options by the glass and a bottle list divided into Riesling and Pinot noirs as well as a separate list of sparkling wines. Similarly over 10 sakes are offered with a handful of beers (mainly by Great Divide) and a few house cocktails including a rendition of a Moscow mule ($8) made with green tea vodka.

As for Osaka, he has a lot more up his sleeve. He mentioned that Twelve was really a stepping stone on his way to making it in Denver and he now sees himself on a path similar to other fine dining chefs that have expanded in the city:

“Look at Troy Guard. He’s been here a long time…he has a steak house and a taco place… If you want to compare that as an example, ” he remarked in referral to his own expansion… What that means exactly is still unclear (anyone down for some Osaka Tacos?). Either way we’ll be waiting to see how the Osaka expansion pans out. But for now it seems like Denver’s ramen lust probably isn’t slowing down, rather it might just have started.