The Morning After: Neighborhood Guide to Chicken & Waffles

There’s few more satisfying brunch options than a healthy serving of chicken and waffles. This ultimate comfort food has become a staple on many restaurant menus in the last couple years and it’s looking like the trend isn’t going to fade.

Now many establishments are not only perfecting the craft but dreaming up inventive new creations. Below you’ll see several of the classic versions done right as well as ones made with gluten-free breading, hot sauce ice cream cream and a plethora of sauces and gravies. We hope you enjoy! 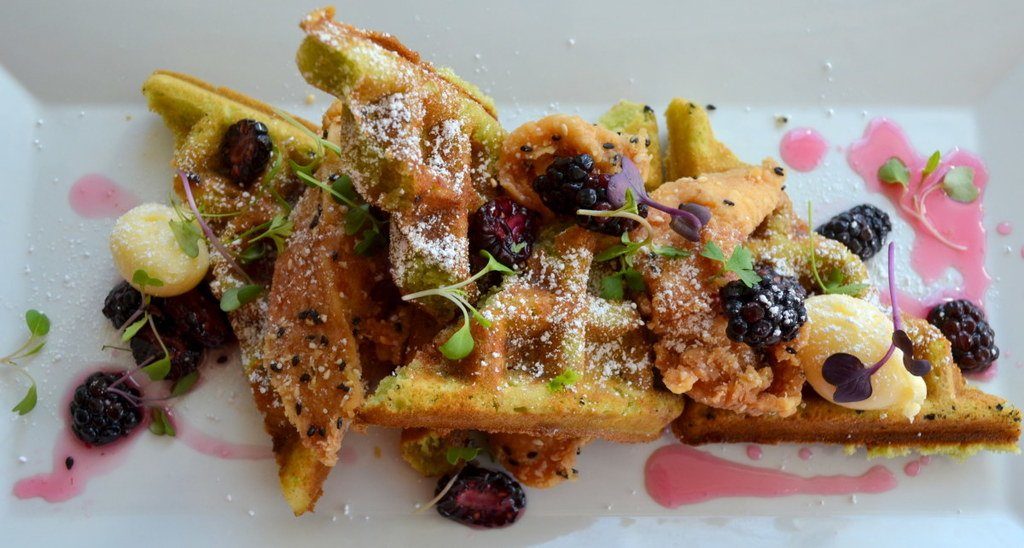 Con: Glaze’s menu is meant for the adventurous, not the timid eater.

The Low Down: Glaze has really upped its gastronome game with a menu of inspired new dishes. Its Chicken & Macha Green Tea Waffles ($11) are a showstopper. The green tea maintains its vivid green color even after cooked––not an easy feat. Chef Kris Paladino then carefully layers the waffles with a black and white sesame seed encrusted chicken. The light sea-saltiness and crispiness of the chicken perfectly counteracts with the soft, coyly sweet green tea waffle. It is topped with a bright and balanced blackberry ginger syrup. A touch of lemongrass elevates the complex palette of the dish. A must try. 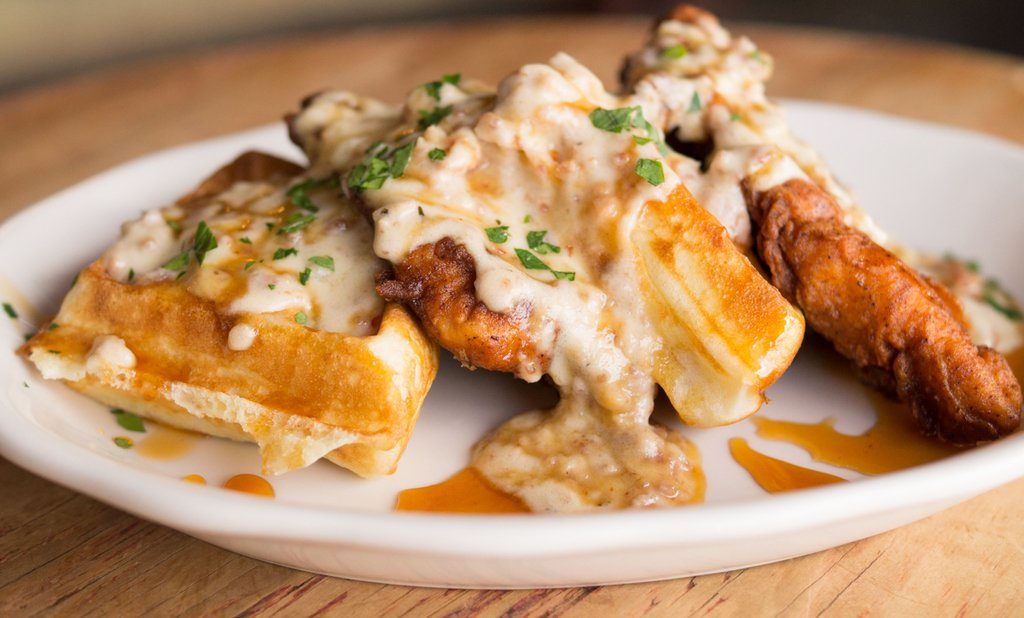 Pro: Boneless fried chicken cuts out some of the work for the famished, operating-at-less-than-100% brunchgoer.

Con: It’s gone in half the time.

The Low Down: This is my personal favorite 0n the list. The quaint interior at Devil’s Food makes it charming, but it also means you’ll most likely be waiting in line on the weekends. The food is well worth exercising a bit of self-control, or you can have a cup of coffee and a pastry while you wait. Devil’s Food’s variation on the dish is closer to the second of two touted chicken and waffle originators, the Pennsylvania Dutch. Two boneless breasts and buttery waffles, smothered in gravy, make this one of the easier iterations to enjoy effort-wise and it is perhaps twice as tasty. 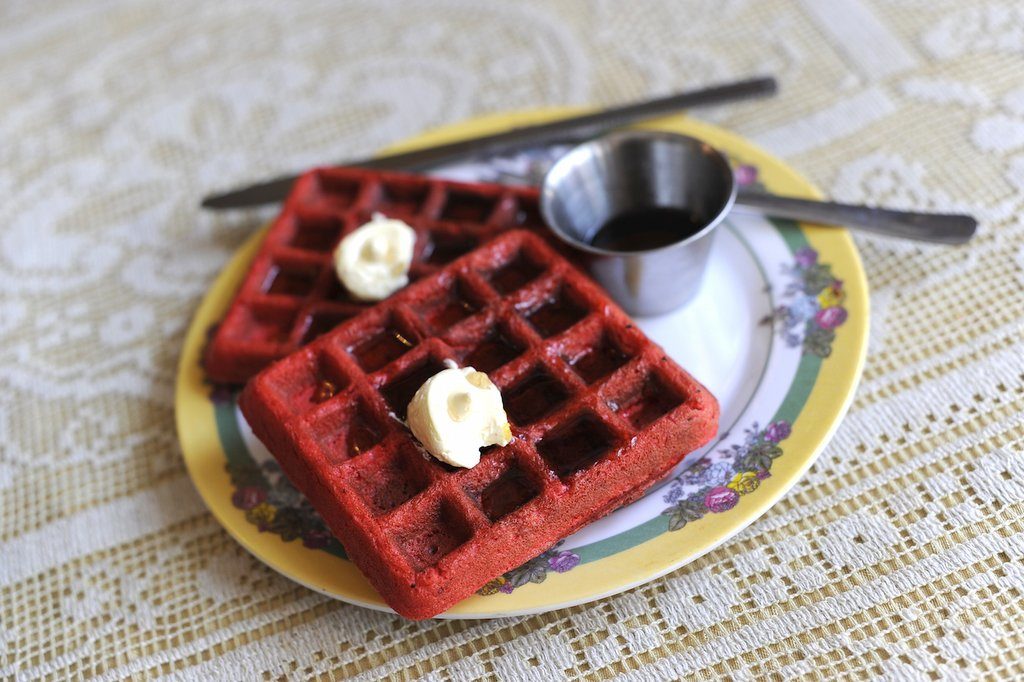 Pro: For those with lighter appetites, Cora Faye’s Chicken & Waffle plate is the best way to enjoy this dish without regret.

Con: For those with heavier appetites, you might need to double down to truly get what you came for.

The Low Down: At Cora Faye’s, family tradition is its most valuable asset. When she opened the doors to Cora Faye’s in 2006, owner Priscilla Smith brought with her four generations of soul food recipes crafted and perfected by her ancestors from Anniston, Alabama. One can certainly taste the time and dedication that goes into every morsel.  The small Chicken & Waffle plate comes with a small red waffle and a thigh or leg for just $4.99. 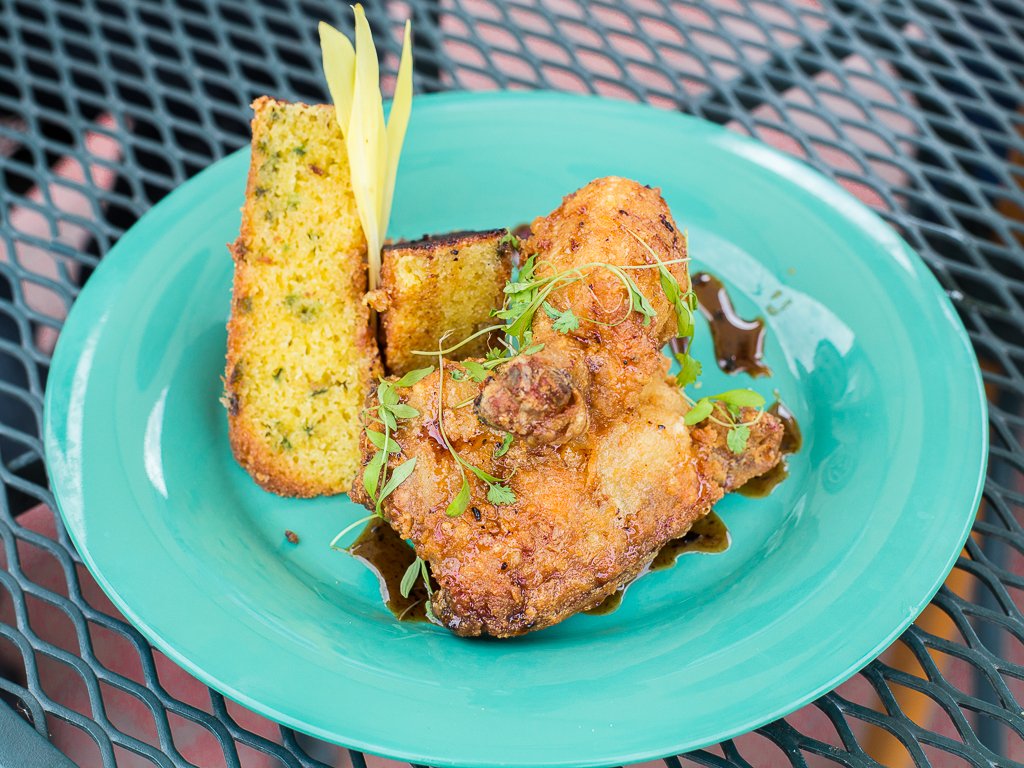 The Low Down: The BSide is a fun concept dedicated to delivering American comfort food done the BSide way. Its pressure-fried chicken, dredged in a rice flour and tapioca breading, has made many regulars of otherwise one-time customers since it opened its doors last September. The BSide has also started offering fried chicken to share plates, so if you abide a no-gluten diet you can either substitute the waffles for any one of many other delicious sides or just go big on the bird with 4-piece ($13), 8- piece ($25), and 12-piece ($36) family-style plates that come with a host of dipping sauces. 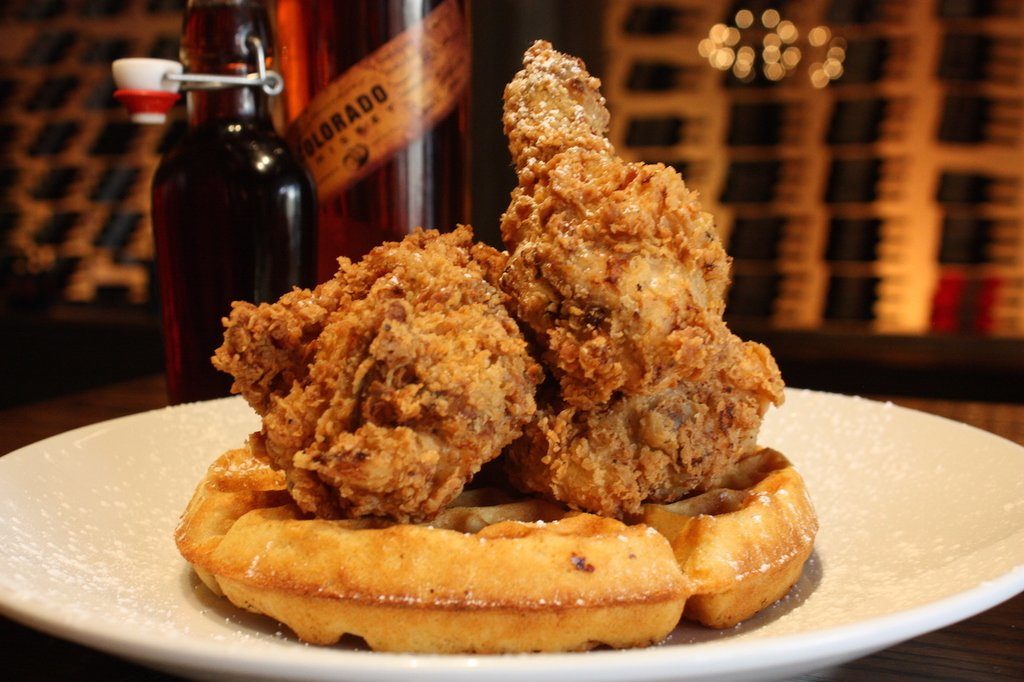 Con: Only open for brunch one day a week, but the Chicken & Waffles dish is also on the lunch menu.

The Low Down: Second Home Kitchen + Bar, located underneath the JW Marriott in Cherry Creek, offers a great Sunday Pajama Brunch (any child under 8-years-old, dressed in his or her pajamas, eats for free) that is perfect for the whole family. Forget the bells and whistles; this is just a great plate of fried Chicken and Waffles ($18). Tender white meat, a fluffy cornbread waffle, sausage gravy and Stranahan’s maple syrup for the win. 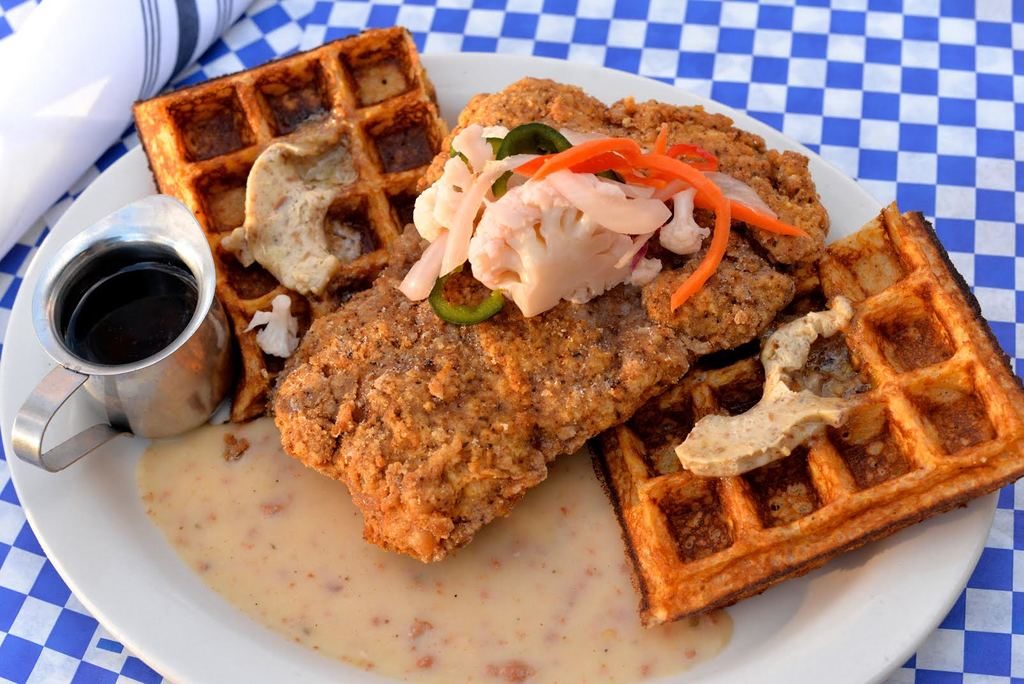 Con: While it may one of the most popular dishes, the chicken and waffle has strong competition in Lola’s other modern Mexican flavorings.

The Low Down: Though mostly known for its modern take on Mexican recipes, LoHi’s Lola proves that it is committed to crushing the competition when it comes to spicing up every dish in which it dabbles. When people frequent a restaurant for one thing, like these Chicken and Waffles, you know it’s the real deal. Lola’s Chicken & Waffle ($12) comes with chorizo gravy and cherry-fresno syrup, making for a savory and sweet treat. 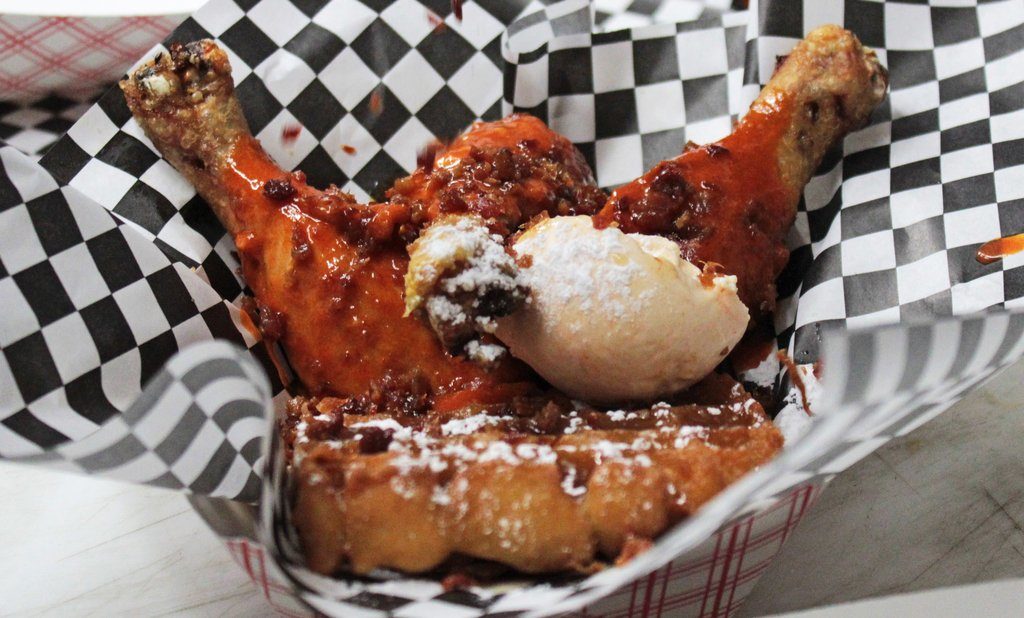 Pro: With a spicy, sweet and oh-so savory flavor combination, this super decadent chicken and waffles will satisfy cravings you didn’t even know you had.

Con: It can be a little much for some, so come hungry (or hung-over).

The Low Down: If you’re more of a nomad that doesn’t stick to a paticular neighborhood, we’ve also included one option for you. Pink Tank is a zany and highly energetic food truck that is known not only for its intriguing family dynamic (father-daughter duo run the operation) but also its delicious culinary creations. The chicken and waffles is a perfect example of what Pink Tank is serving up. This rendition is served with cake batter waffles, three fried chicken drumsticks and then topped with a scoop of hot sauce ice cream. Oh yeah, you read that right. It’s a gut buster, but worth the splurge…Read more about Pink Tank here.