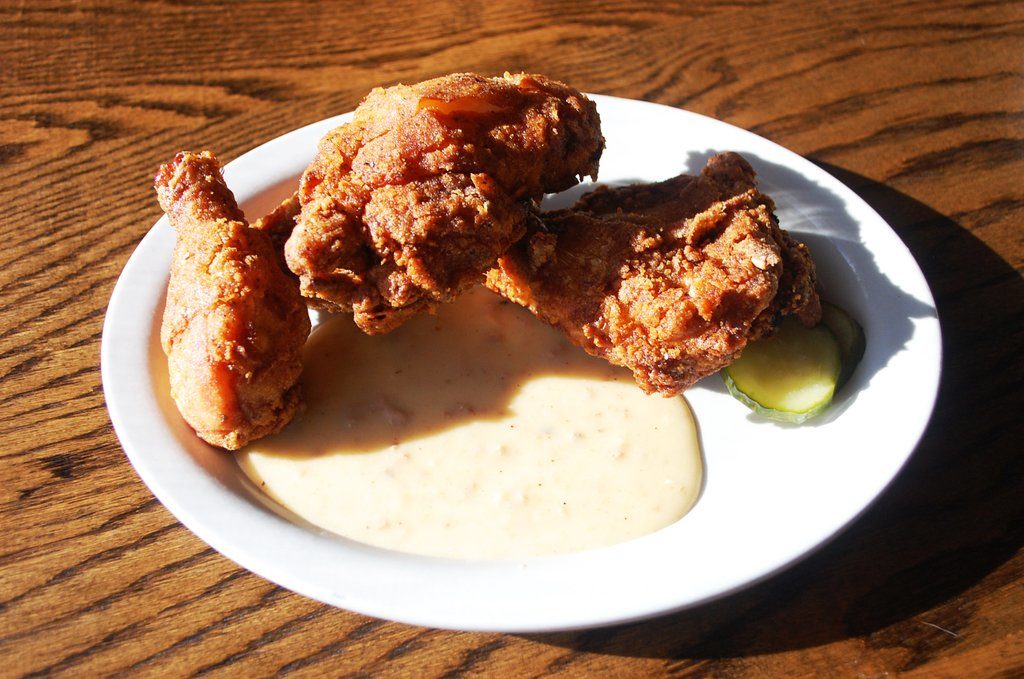 What: An affair of hot chicken and cold beer in a chic, roadhouse-esque family oriented brewpub that is steeped in Americana.

When: Brunch service Sunday at 9 a.m.

Sure, driving 30 minutes outside the city is probably not the first thing to cross your mind on a Sunday morning. Under any different circumstance I’d probably grumble a bit, too—sometimes it’s all about saving a little face, lest one betrays the fragility of his hangover. But, then again, if this hypothetical situation involved going to Lafayette to check out the Post, you would have had me at beer and fried chicken. Out of fairness to the folks at the restaurant, the drive to Lafayette isn’t too daunting but if you’re still on the fence, I’ll spell it out: the trip is well worth the gas.

The Post Brewing Co. occupies a good chunk of real estate on the corner of  Public and Emma Streets. Dave Query bought the building from the town of Lafayette, to which it had been turned over by the administration of the Mile High Post of the VFW. Other than some of the pale green siding on the exterior and the post designation 1771, which adorns the menus in honor of the organization, everything has been updated to fit a theme. Chiefly, the cut log lighting fixtures and discarded barn wood—which Query found in Michigan—are there to jive with the menu’s offerings of American fare. 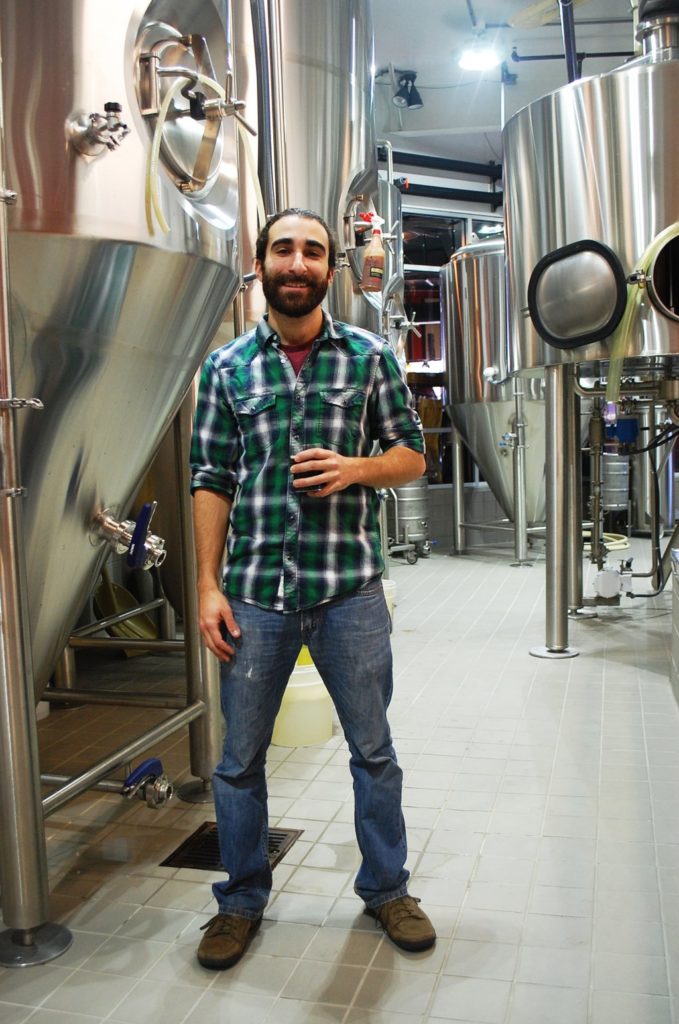 Nick Tedeschi, one of the happy employees at Post.

Query had been on the hunt for a while, looking to find the best space so that he might fill a vacuum—yes, crazy to imagine that beer and chicken was still an untapped fount in the Boulder County area only a couple years ago—but now the restaurant is coming up on the one-year anniversary of its grand opening. The brief period of settling-in behind them, there are now three distinct things going on at the Post, and three men in charge of them: Bryan Selders is on the beers, Brett Smith is in the kitchen and John Hinman is behind the pastry.

Brewmaster Bryan Selders was called back to the casks after going on a more or less indefinite hiatus from the brewing industry—he was at Dogfish Head Brewery in Delaware for 10+ years. Thankfully he’s back, but in a much different element with a stronger focus on drinkability and pairing than on the out-there recipes by which Dogfish has built much of its following. Still, Selders’ presence at the helm of the brewing operation essentially means two things: one, his experience has streamlined the process and made on-site brewing a breeze, and two, his presence makes for beers, particularly the IPA, with distinct East Coast qualities: aromatic, tropical fruits and up-front malt character (whereas West Coast, and often Coloradan IPAs are more commonly known for their dry citrus and crispy bitterness).

Nick Tedeschi is Selders’ right-hand man who came over to the Post from Zolo, one of Query’s other concepts. He started out as a homebrewer when he was still in high school, lending a hand to his father in Mystic, Connecticut, where he grew up. Tedeschi explained that as focused as they are on freshness and quality, right now the Post is merely trying to build brand recognition. They have installed their product in 20-25 local restaurants and are brewing almost every day to keep up with the demand. While the Townie Ale and Howdy Beer are the most popular drafts on tap, Tedeschi gestured toward the Meathooks Dark Mild Ale as the most indicative of what they want their beer profile to represent. Possibly the best thing about the Post is across-the-board knowledge about this profile, which makes for fantastic all-around meals. My server’s suggestion of Right Side Amber worked well with the dishes below and a growler of the Big Rosie Porter was a nice oh-whatever-let’s-go-for-it dessert beer—perfect for a lazy Sunday.

I don’t typically go for Deviled Eggs (four for $7)—and I’m sure I’m not alone there—but the Post’s addition of crispy pork cheeks add some salinity and texture that make the plate go down well. Have these with the Buttermilk Cheddar Biscuits ($0.50 each)—plus honey butter and a side of preserves—or kick things up a notch with The Hot Chicken Drumsticks ($8).

In addition to other, rotating specials, the Post in the Hole ($12) and Pork Shoulder Huevos ($11) are your big flavor brunch dishes. But the go-to is obviously the fried chicken. Lovingly dredged in a gluten free mixture, the skin is crispy, flavorful and the meat tender: everything you’d want from a good plate of the breakfast bird. 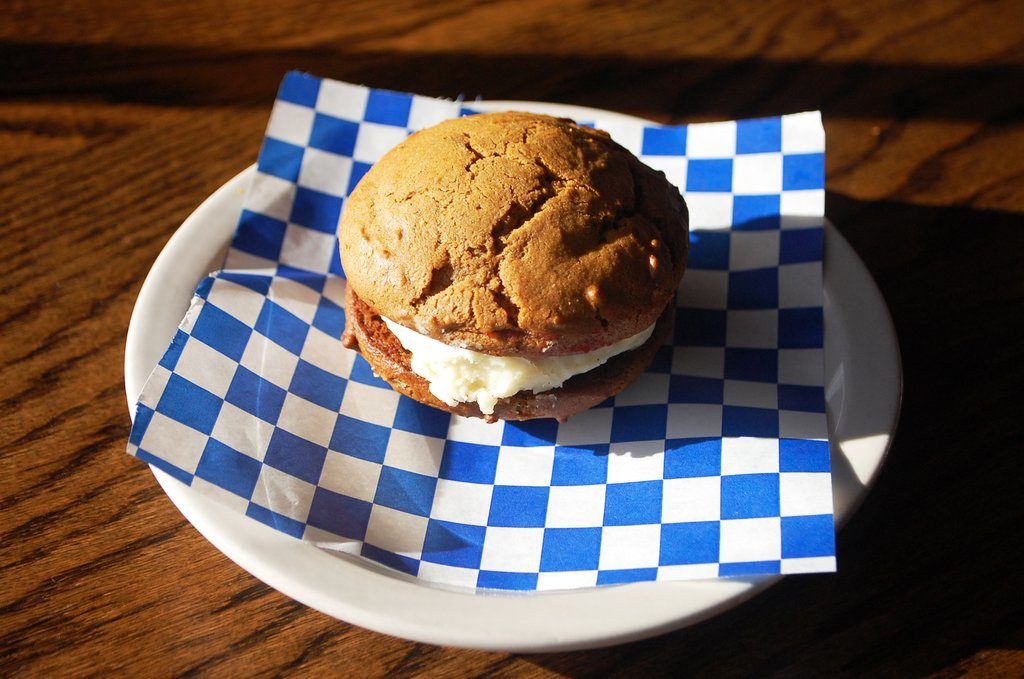 And last but not least, the pastry. An ongoing joke at the restaurant is that John “Haji” Hinman, who for a long time was the only male participant in the local baking competitions through which he has perfected his craft, is an octogenarian grandmother who merely travels in a masculine vessel. He does cakes, cobblers and pies of the traditional variety, but also, oddly enough, Whoopie Pies. Often unique to the northeast, these treats offer as much delight as enunciating their onomatopoeic name. Try Haji’s seasonal rendition with gingerbread cake, vanilla mascarpone and creamy apple butter.

Swing by the Post for a beer or go whole hog (or fowl) and dig into one of the straight-up heartiest meals you’ll have had in a while. Hell, if you just want to drink you might as well kill four birds with one stone and turn the visit into a brewery tour: Liquid Mechanics, Front Range and Odd13 are all within a few mile stretch. Just be sure to designate a driver.