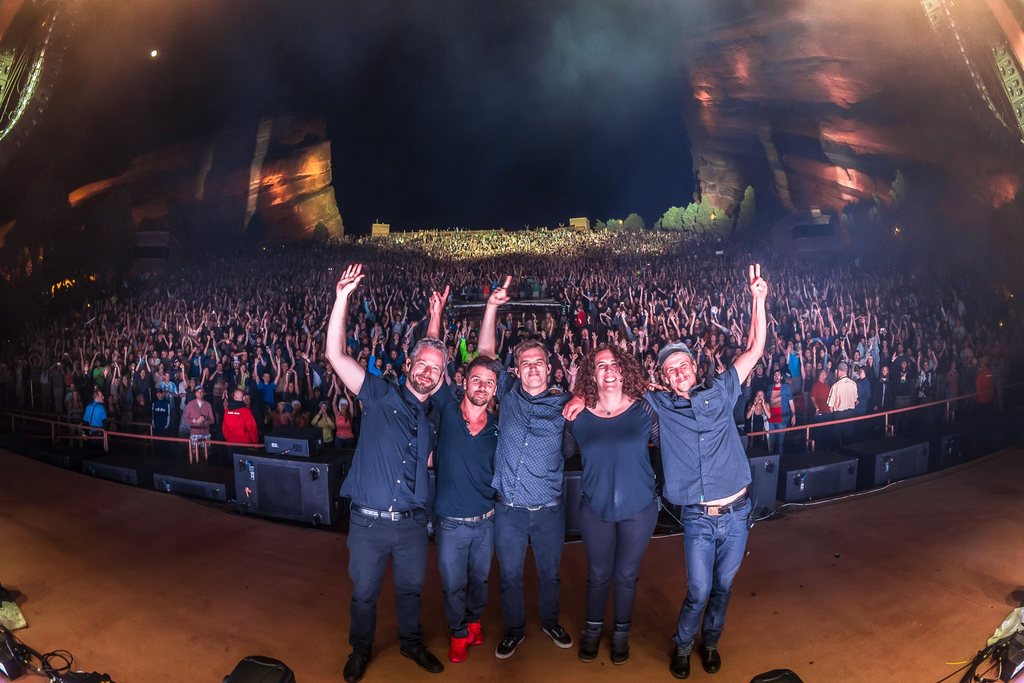 Sound Tribe Sector Nine, otherwise know as STS9, returned to Red Rocks this past weekend for an incredible two night run. Both nights were a unique and stellar performance of musical mastery that rocked the crowd off their feet. STS9 played an entire catalogues worth of music over six insane sets, including an acoustic Axes The Cables set each night. These special Axe The Cables sets were the first ever performed at Red Rocks by STS9, and they did not disappoint their fans. The first night, Friday September 5th, was an intense whirlwind of energy as everyone scrambled into Red Rocks to claim their favorite seat in the house, yelling and shouting in excitement. When Sound Tribe came on for their first set of the night, the amphitheater exploded with screams of joy and was only deafened once music began to stream from the speakers.

The crowd was enthralled by STS9 for the entirety of each set they played. The lights for both nights were absolutely stunning, spinning and shifting in different shapes and patterns, while altering rainbow colors every moment. The opening Axe The Cables sets got the crowd swaying and grooving each night, warming them up for the double dose of electronic sets that they would throw down. Those acts were a different animal entirely. The plugged in sets with full amplification were a beast of wild guitar riffs, banging drums and thumping bass lines that flew across the musical spectrum. STS9 prefers themselves to be in sync with one another rather than go with full tilt solos and the rythym they gain when they find their groove and get into full swing is awe inspiring to watch.

The second night, Saturday September 6th, followed suit beautifully, continuing the trend of both wild dance songs slayed on electric guitar or soulful melodic songs strummed with a standup bass or keyed gently on a piano. Each and every one of their six sets was a special blend of rock, funk, electro, and psychedelia but to a greater degree than a typical show. STS9 loves Colorado and specifically Red Rocks, and they pulled out all of the stops for this awesome two night run. The debate between which night was “better” was never clearly settled and probably never will be. Overall, both nights and every one of the six sets were not to be missed, and STS9 showed their fans how much their love and admire them. They will certainly return to Colorado at some point in the future. Until then, you can find out a lot more about STS9 and individual band members, as well as see their set lists for the last two nights at Red Rocks by going to STS9.com and STS9news.com.