The Bunny That Became a College Journalist and Survived a “Sharknado”…

Ladies and Gentleman, 303 Magazine Film + TV staff got the chance to talk to an actress known all over the world. She has asked Jeff Bridges to blow on her toes, she got Ryan Reynolds to commit to graduating college, and last but not least, she survived a hurricane of sharks that terrorized the world (minus a bitten-off hand)…. Who could it be other than Mrs. Bunny Lebowski herself, Tara Reid?! So here is our exclusive Q&A with this legendary bombshell, who, (if you didn’t catch the references) starred in famous Hollywood blockbusters like: The Big Lebowski, Van Wilder and Sharknado… and other films like: American Pie, Scrubs and Dr. T and the Women… but you know, no big deal. 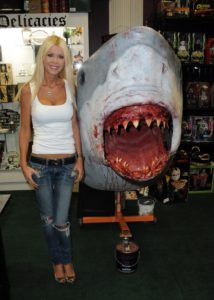 Q: Being a woman in the film industry, and with so much competition for each role, what has been the hardest thing that you have had to overcome throughout your career so far?

A: “I would say it would be trying to have “laugh power” and just keep going. There are so many beautiful, smart, talented, amazing girls out there, and when you just get older and older you have to keep it up. That’s what we have signed up for.”

Q:Now, you were really big in the 90s and then there was a time where your fans really missed you for a couple of years until you re-emerged recently – how does it feel to be back in the lime-light? Did you miss us?

A: “I think it’s amazing—I love all of my fans—it’s so exciting for me that they are still there. We are doing it all again so hopefully they will continue to be there. I love my job — it’s the best job in the world. When I am on set my life goes away and I get to become someone else; I get to be “Bunny” or all these other characters. You wear their clothes, marry their men, no one ever criticizes your character — they can criticize you, but not your character — so my goal is to just keep going and get as many roles as I can, because there is nothing more liberating than that. It makes it to where it is even awkward just to be yourself again.”

Speaking of becoming characters such as Bunny Lebowski, Tara admitted all the nerves that accompanied her work in such a renowned film. As this was one of her first movies, Tara revealed that her hands were actually shaking the whole time in her famous scene with Jeff Bridges (the one where he watches her painting her toe-nails). However, with the amazing Coen Brothers, and wonderful stars all around her, she sucked in her nerves and pulled off the scene.

Q: In one of my film classes during college we studied the scene in The Big Lebowski where you ask Jeff Bridges to blow on your toes. The way the camera approaches you, like it is Jeff Bridges, is a voyeuristic technique where the person looking at you gets the pleasure in looking at you, but you have no idea you are being looked at – how do feel about thinking of film in those terms? 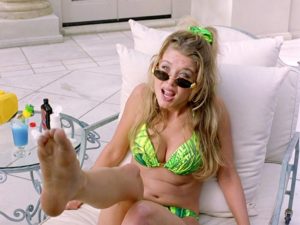 A: “You know, I love film and I feel like looking at it that way really showcases “Bunny’s” whole response to that — she is used to having attention so even when she doesn’t know she is being watched, she knows. Also, I really trust my directors — they are some of the best in the world — they made it so that you don’t have to think about anything because you trust them so much that you know they will lead you the right way, and in the end that is what taught me to a better actress.”

Q: Do you like the types of characters that you get to play or do you ever wish to branch out and play someone completely different?

A: “Well, you know, I’ve done 46 movies—they are not all hits but do I wanna play more characters? Absolutely, yes—it’s what makes me a better actor and person…. Every budget you can learn something… the lighting, camera angles, what we are doing—there are so many people that are involved— you have an amazing crew and they are making the film for you—without them there is nothing….”

Q: In all the movies you have been in you have played alongside such powerhouse actors like yourself – can you say a couple of actors you have particularly loved working with?

A: (In Dr. T and the Women) “Richard Gere — I remember my first day on set, I was so unbelievably nervous and he was just like, ‘it’s okay, I am here’. The best part though was working with Robert Altman, he is the best director I have ever worked with, and the both of them were so amazing, so loyal and so powerful, they made me a better actor. Altman was right there with me, supporting me, doing everything, and he really taught me so much.”

Also, fans can be looking forward to one of Tara’s newest projects, Charlie’s Farm, releasing December 4th. Filmed in the middle of nowhere, amongst the rugged and wild terrain of the Outback, Reid describes it as one of the scariest experiences she has ever had, which became a blessing in disguise due to that fear fueling the scary situations within the movie.

I know it sounds like all Tara does is work, work and work, however, with all the love she has for her family — younger twin siblings, older brother and parents who have been married almost 50 years, she has the strength and support to have done all the movies under her belt and continue on in many more to come. So, dear 303 readers, I hope that this Q&A with Tara Reid has given you more of an insight into this illustrious star. So you can follow her, watch and support her, because Tara loves her job too much to go anywhere anytime soon.