Originality, quirkiness, and synchronized dancing at its finest: OK Go will be playing the Gothic Theatre this Saturday, August 9 at at 9pm. Tickets are still available for $15. “The world’s most creative band” has gained wild popularity due to their low budget, one-take, hilarious and brilliant music videos that they’ve made a point to share with the public primarily through their YouTube channel.

303 Magazine had the opportunity to catch up with OK Go’s lead singer, Damian Kulash, to discuss the band’s creative evolution, their new album Hungry Ghosts, OK Go’s secret guardian angel, the trials and tribulations of shooting such crazy videos… and fish sticks, of course.

303: Is it true that your grandfather invented the fish stick?

Kulash: It is indeed true. He was a Harvard biochemist and what he discovered was that there is a certain way in which you can freeze fish so that when you unfreeze it, it doesn’t fall apart again. What’s crazy is that these days, we think of frozen food as an essential evil. But in the 1940s, it was basically saving the world. 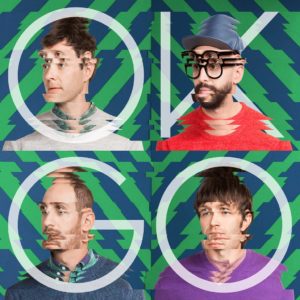 303: You guys have basically all known each other since you were kids. How do you think you’ve all evolved and grown together over the years, creatively speaking?

Kulash: I could spend this whole interview trying to explain that. We’re really wildly different people, which is why we get along so well, I think. We just don’t fight. We all compliment each other really well. I don’t actually know how we’ve grown, because I don’t remember life before.

I will say that the way I feel like I’ve grown creatively, personally, is that some time during the course of the band I started to realize that shooting for an end point that you know just means you wind up with something you can imagine beforehand. Our first big hit we had was Get Over It. I imaged that song before I wrote it. And I went in and I wrote that. And I like it, it’s fine. I’ve written much better songs since then. But just playing with stuff and watching for the moments of alchemy– the moments when things burst- you end up with moments that you never could have never imagined. They kept happening along the way.

The result is something you couldn’t have imagined before hand. Maybe other people could’ve imaged these songs, but I couldn’t. With the videos, it’s a lot clearer.

People always ask where you come up with these ideas. We don’t. They just happen as we’re creating them. It took us a while to learn that. You’re walking the plank.

303: Tell me a bit about your relationship with This American Life’s Ira Glass and about the time that you guys spent as the house band for the podcast’s live performances.

Kulash: Oh boy, that’s a long time ago. Ira, in a weird way, has kind of been the guardian angel of our band. And he sometimes doesn’t even know. I worked at NPR when the band first started. Not at This American Life, but in a nearby office. A lot of lyrics in our songs came from actual conversations with Ira at dinner parties. Two things happened: the first big tour we ever did was being his backing band (for This American Life). During that tour he convinced us to do ridiculous dances on stage. We already came up with one that he saw and convinced us to do it on stage live, since we obviously couldn’t do it on the radio. We did it at this big Broadway theater and people went fucking crazy. Entertaining people means really paying attention, not thinking you know in advance. Do something they don’t know, that you don’t know.

303: Your sister helped you guys choreograph the synchronized dancing in the video “A Million Ways,” which later became the most downloaded music video ever- over 9 million downloads! Does your sister or other choreographers help you with most of your videos? Or do you guys come up with a lot of the dance moves on your own? Tell me a bit about the process behind practicing the nearly lost art of choreographed dancing whilst singing. Usually that kind of stuff takes place with back up dancers (or the Jackson 5), but you guys seem to be so skilled at multitasking.

303: Between the dog training, the treadmills, the toast, the Rube Goldberg Machine, the wallpaper, the optical illusions, and the stunt driving- you must’ve put in a serious amount of training and practice hours and trials while filming your “low budget” music videos. What was one of the most frustrating moments you can recall while filming a video? And one of the most satisfying and cathartic moments upon achieving what you were striving for in a video?

Kulash: The most frustrating moments are usually dealing with brand, you know. Dealing with people who need to know that their investments are safe. Usually we do things that are sponsored, but people want to know what their dollars are paying for. In normal circumstances, you can give them a solid shot in the beginning. But we’re normally dealing with the race against ourselves up until the day of the shoot. Can we actually make this? Can this actually happen? The hard moments are when you’re like FUCK. This might fail.

When the Rube Goldberg Machine actually happened I felt like I was having a baby.

OK Go’s “This Too Shall Pass” video:

303: Your new album Hungry Ghosts will be out in October. What can we expect from that? Anything different, unusual, or exciting?

Kulash: Yeah, it’s more electronic than anything we’ve done before. But not in an EDM way. It’s more focused than our last record, but really experimental. I hate that word because it sounds pretentious. We’re just trying things that are unknown to us. We push ourselves pretty hard, but tried hard to keep it concise. The last album was pretty spacey, and this is more a bit to the point.