Umphrey’s McGee is one of those bands you just can’t get enough of, which is probably why they’ve been around for the better part of two decades. It is also why they’ve created a cult base of fans that seem more like a giant family and are expanding into bigger territory out of the often pigeonholing jam-band genre. This family of fans feeds off of the nectar of six great musicians, who have cultivated their craft and play tirelessly for the enjoyment of the fan. This love of music is more than apparent any time you go to an Umphrey’s show and watch these craftsmen toil with their tools to create something incendiary and simultaneously comfortable. Their kinetic music sweeps through crowds of packed amphitheaters and allows fans to grasp to sizzling guitar riffs accompanied by rhythmic bass, percussion and piano to create something that truly embodies rock and roll.

For your Independence Day enjoyment, Umphrey’s McGee is performing two nights in Colorado. First, they will head to the Boulder Theater on the 4th and on the fifth will hit Red Rocks, tossing around their instrumental prowess like the rock ninjas they are. I caught up with Joel Cummins, keyboardist for the band, to ask him some great questions. Unlike many of my interviews, these questions came mostly from the fans, with friends lining up to have their questions answered by guitarist Brendan Bayliss, bassist Ryan Stastik, guitarist Jake Cinninger, percussionist Andy Farag and drummer Kris Myers. And while I was slightly disappointed the rest of the busy sextet weren’t available for direct answers, Cummins improvised, as these band members do so well, and managed to rock out these responses as if the rest of the band had been seated next to him, playing off of one another.

303 Magazine: You just released your new album, Similar Skin, on your label. How is this record different from your other ones? Does it feel more tied to the band?

Joel Cummins: Similar Skin is the essential Umphrey’s McGee rock record. We went into the album with the approach of wanting to create an album with a more more rock n roll-centric vibe, as opposed to the varied stylistic approach we’ve taken with previous releases. Releasing Similar Skin on our own label, Nothing Too Fancy Music, was the perfect move for us. We do feel more tied to it as it’s been our blood, sweat & tears that have been poured in at every step of the way. I think we’ve also had a fantastic response from our fans who realize that they’re supporting Umphrey’s and the creation of studio art. Having our own label has been a huge amount of work, but in the end, it’s so much more rewarding knowing that we’re the ones who can decide whatever it is that we want to release. 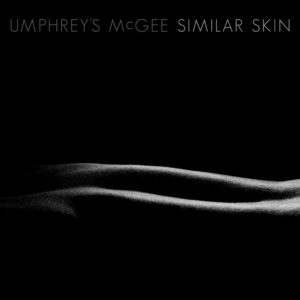 How did the actual production of the record go? Did you pull mostly from classical influences rather than modern music? Or both?

Similar Skin has a 1970’s rock ethos to it, with a lot of the trimmings and sounds of the 21st century. There are definitely modern elements including beat production, synthesizers and effects that are not as much of throw back to classic rock. Manny Sanchez & Greg Magers of IV Lab Studios in Chicago co-produced the album with us and really helped us maintain the focus on what the album should be. They helped us select tracks, add or delete parts and, in general, keep our eye on the prize of making a real rock album. The fact that we used 2 inch tape to lay down basic tracks certainly gives the album a retro, warm sound overall. But we also used ProTools to edit & arrange some of the music. So I’d say we’ve got our feet firmly planted in both the 20th & 21st century.

How often do you rehearse? What is it like in the studio? Is it ever difficult with six people playing to make a record rather than just jamming?

We rehearse a good amount on the road, but 17 years into our history, it’s certainly easier than it was when we started — that is to say, we’re much more efficient. So a lot of the work is actually more listening, taking notes & preparing in advance before we get together as a group to work on new original material or learning a cover. In the studio, it’s all about getting a good drum take for a song. We play the arrangement live with Kris and sometimes our other parts will be kept, but usually they’re just road maps. I went into the studio and laid down most of my tracks at Fonogenic in the Los Angeles area, so that was a good month or two after the basic tracks had been put down. As far as the challenge of making a record vs. jamming together, it’s two completely different ways to create and we’ve gotten better at both approaches through the years. Jake is a studio master, so having him give us bits of advice as we go is always really helpful.

Recording & working on the Similar Skin tracks was the most fun I’ve had working on an Umphrey’s McGee album. Everyone really stepped up to the plate on this one.

What motivated you guys to start doing more covers?

We started playing covers as a way to get new listeners to connect to the band back in 1998. We’ve actually done less and less covers as things have gone and the audience has become more familiar with our original material. Now we typically only play one cover, two tops per night. Usually 15-18 original tunes that we’ll rotate as well. And we’ve written about 20 mashups over the years, which are essentially original compositions using cover material.

Favorite song we’ve ever covered is probably “Scenes From An Italian Restaurant” because it’s got a great piano part for me. Other favorites include Mark Knopfler’s “We’re Going to War” from the Wag the Dog soundtrack and Al Dimeola’s cover of Chick Corea’s “Señor Mouse,” which was also the hardest song we’ve ever learned as a group and it took about 3 months in rehearsal to get it done.

Umphrey’s really connects with the fans, more so than many rock bands; when/why did you all decide that you wanted your music and performances to be really geared towards fans’ enjoyment, rather than just another performance of music?

With whatever you do as a musical artist, it doesn’t really matter unless it connects with a listener and means something. We’re in a time in history where technology has allowed to us interact with people on a more intimate, often one-on-one basis. When we invest in what our fans enjoy, we’re actually investing in ourselves, and that’s the smartest investment. With so many bands and so much music out there, anything you can do to set you apart from the pack creatively and artistically needs to be considered. We do some shows that are fan curated, but we also do a lot of shows where it’s pretty much the band picking out what we’re going to play. With 175 or so original tunes in the catalog, it’s really nice to play 4 or 5 nights in a row and not have to repeat a thing. Keeps it fresh for the musicians and the fans.

How do you guys keep up with the way music is changing to more electronic and automatic sounds while also staying true to yourselves and creating just really great instrumental rock music?

We’re not really thinking about trends when we’re creating music. Umphrey’s has never been an electronic band, though there have been elements of electronic music in our sound since 1999. So it’s not anything new for us. We write rock songs, we write progressive songs, we write hybrids of both. It’s important to just be true to yourself and not worry about where the rest of music is going. Similar Skin is a perfect example of that. Bands like Queens of the Stone Age, Opeth, Foo Fighters, Cage the Elephant, White Denim, Black Keys to some extent….. they’re some of the only acts out there really keep the rock n roll spirit alive.

The amount of bands out there that are producing real rock music that’s significant can be counted on one hand.

What are your musical influences as a band?

For us, it’s all over the board. I grew up as a classically trained pianist, so I love Debussy, Schubert, Beethoven, Stravinsky, Shostakovich and a ton of early vocal music in addition to things like all of the Stax singles, Miles Davis, Donny Hathaway, Metallica, Between the Buried & Me, Local Natives, William Onyeabor, Tycho, Foals…… you can see my listening is all over the place, probably more than most people. That’s true for a lot of the guys in the band and I think that interest in diversity is something that keeps us constantly challenged.

Where you see the future of the band going?

We’re finally getting to the point where people outside of what you might consider “jam band” community know the band and are coming out to shows. I see the future of the band running along a similar line. In 2014, we’re starting to sell out theaters & in some cases small amphitheaters. So it’s been a nice recent run. As far as the sound, I’m sure we’ll hit upon lots of different sounds and produce something very different from Similar Skin as our next album.

What’s your spirit animal—an animal that really embodies you as a person? What would you say are the spirit animals for the rest of the band?

I’m like a hawk always stalking prey, Jake is a black leopard running in the African Savanna, Andy is like a big, lumbering polar bear who can pounce but is comfortable in water or on land, Kris is the chameleon who can become anything and changes colors, Ryan is our camel — he can store liquid and traverse long miles and finally, Brendan is like a penguin, adept in water & the cold but also not afraid to give you a pebble once in awhile.

Why does Kris love that striped, two pocketed shirt so much?

As a drummer, Kris has a lot of “stuff” so he needs as many pockets as possible.

Ask Ryan Stasik what’s going through his mind when he picks one member of the audience and stares at them while making sweet rhythmic bass love to their ears.

What are some of your favorite one-liner jokes? This is VERY important.

During load-out: “We’ll have you out of here faster than a fart in a dust storm.”

During golf, especially off the tee: “Long….. and wrong.”

“Does anyone know where Kris is?”

What types of covers or new material can we expect at the Red Rocks show?

Well if I told you that, it would ruin the surprise! Expect something special for Red Rocks, and certainly an original song debut if not two.

Any post-Independence day surprises in store?

Yes, I have to go home and immediately pack up my house and move — major back to reality buzz kill. So I’m sure there will be plenty of surprises as I pack up and find things I’ve lost over the past few years. Thankfully, I’m only moving about a mile.