Review: Welcome to the D.O.P.E. Game’s latest mixtape is brimming with dynamic rhymes 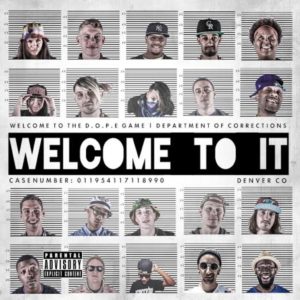 Hate it or love it, Welcome to the D.O.P.E. Game has been having the best week ever. The crew is releasing its “Welcome to It” mixtape today via iTunes and will culminate with a live performance at Lost Lake tonight. Hype be damned, the most important aspect of creating a product worth listening to is quality. Though the “dope” sentiment is one everyone can get behind (D.on’t O.ppress P.ositive E.nergy), the music speaks for itself.

With production from some of the finest including Black Jordan, Al Kelly and Infamous Jones, the D.O.P.E. movement is handled almost entirely in house. There are some MC’s you’re familiar with, of course Turner Jackson, Catch Lungs, Tommy Brown and others; but the project opens listeners up to more creative rap characters. Frederiiick the Great, for example, is a shining star who is most impressive on “Geronimo” while Sid Madrid is equally thrilling on “Soundscape Surfing.”

Sid Madrid is the California arm of the D.O.P.E. Game and his flipping vocals over the Big J. Beats production are perfect for cruising the strip and celebrating life. Rob4Real is sort of the most valuable player on the project. His rhymes aren’t as hulky and gritty as say, Hustle Man or MC Big House, but he’s the most consistent. On “The Big Homie” Rob4Real employs a variety of tempos in his verses and the result is a perfect amalgamation of style.

Catch Lungs stands out on “Planeteer Song,” with his meditative verses and control in his voice and he’s ridiculously swoon-worthy on “Space Cowboys.” Tommy Brown is a bit uncomfortable on “The Life I Live” in the beginning but eventually gets loose over the squawking horn with lines about “being in the pussy like Nascar.” Turner Jackson tends to play the background in terms of lyrical ability on “Welcome to It” but the MC is the glue that holds the various capabilities together.

The concept of the tape is not only designed to introduce you to the crew’s musical capabilities, but to describe the parts of the game often overlooked. Though the premise is to uplift positivity, there are moments where there’s no Mr. Nice Guy (or gal) to be found. The best track on the album comes via production by the incredible Black Jordan featuring Hustle Man and Mr. Midas. “Hell to Pay” opens with a laconic horn beat with sonic vocal stylings from Hustle and Midas. Their partnership on this one is a perfect representation of keeping the streets on lock; by any means necessary.

A hefty project, (there are at least 17 tracks to choose from), the tape is not without its imperfections.  “Think” featuring MC Big House could have been left on the cutting room floor, as the MC uses pretty much the same flow throughout the project. Lily Fangz is incredible on “Black & Blues” as a songstress while she rips the boys to shreds on “DopeNShine.”

It’s rare to find a huge conglomerate of talent that not only has the ability to work on one project together, but to actually see something like “Welcome to It” come to fruition is magical. Sure, you’re going to love some songs more than others but there’s no way you can deny the dynamism that exists through the D.O.P.E. Game’s  camp.

You can catch the entire crew performing live tonight at Lost Lake for the “Welcome to It” mixtape release. Purchase tickets here.