Utilizing the focus of mobilizing artful individuals who believe in the greater good, Welcome to the D.O.P.E. Game is on the rise. Crafting the most innovative videos, still images and performances, the movement to uplift positive energy is alive and well. Welcome to the D.O.P.E. Game lives the idea that we are stronger as one. That art is meant to be consumed at its highest variety. That creative development is not a lofty idea, but one attainable through taking calculated risks.

The crew has had a pretty stellar year, from rocking shows at Red Rocks to hosting the hip-hop stage at Westword Music Showcase, all of the hard work will culminate with the release of the “Welcome to It” mixtape slated for release on July 11th. In advance of the release, 303 Magazine has a slew of excellent content from the D.O.P.E Game leading up to the live show at Lost Lake this Friday. The show will feature live performances from the entire Welcome to the D.O.P.E. Game family. Purchase tickets here.

One of the first tracks and videos released from the project features Catch Lungs and Turner Jackson over a DealzMakesBeats production. “Planeteer Song” captures the D.O.P.E. sentiment with futuristic gusto. The video features the entire crew creating the future they so desire. Catch Lungs is positively brilliant on this one. Watch the video below:

Breakout star Fredriick the Great (don’t forget to include the two ‘I’s’ as he mentions on this track) shows off his chops in the Dope Game released video for “Geronimo.” Utilizing his rhymes like a war cry, this young MC is raw, uncut and taking no prisoners. Check the video out below:

Check out the “Welcome to It” tracklisting below: 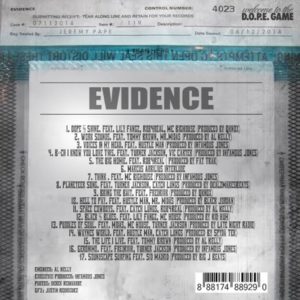