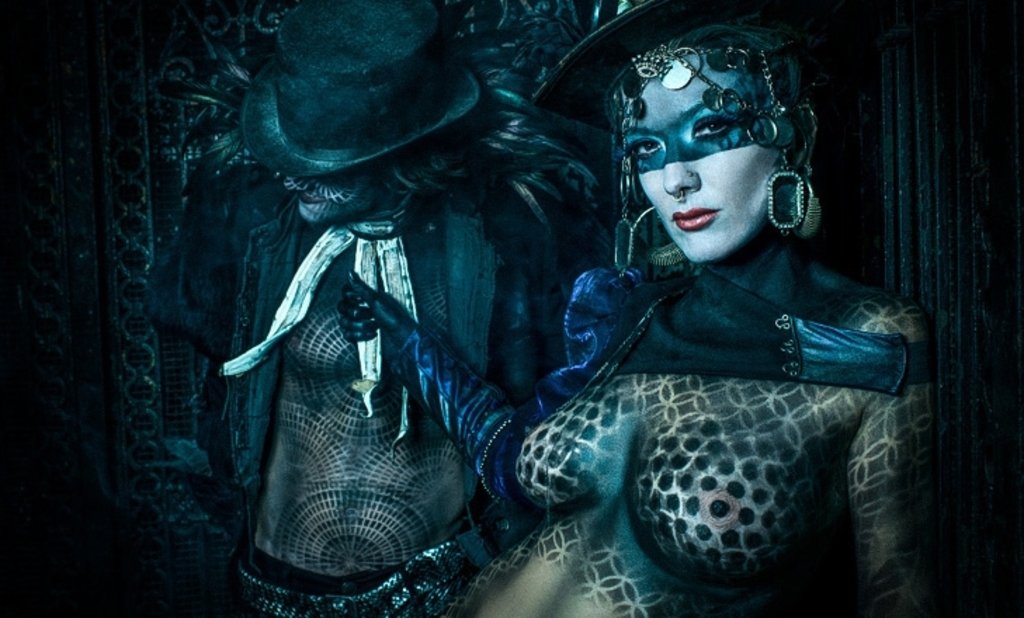 At first glance, Lucent Dossier appears to hail from another galaxy. Otherworldly costumes, makeup and skills set its performers apart from most mere humans. The bass music circus troupe is technically based in Los Angeles, though. Just as aspiring movie stars gravitate to LA from all corners of the Earth, Lucent’s members have similarly coagulated in California from disparate places. Two of the performers on its current Light of the World tour, which stops at Boulder’s Fox Theatre this Wednesday, happen to have resided for periods right here in Colorado.

Aerialist Alicia Marie first landed here in 1998 after a stint traveling in India. “I moved to Boulder to go to Naropa University after a transformative journey traveling through India,” remembers Marie. “I left but then moved back here in 2000 to study aerial with Cathy Gauch. After studying aerial for about three years, I moved to LA to make something of my craft.” It wasn’t the last we’d see of Marie. Love was in the air when Colorado called the gravity-defier back a couple years ago. “Most recently, I lived on a beautiful, magical farm in Durango with one of the greatest loves of my life, artist Joseph Skala.” Wednesday’s show at the Fox will be a high flying homecoming of sorts for Marie. “I studied aerial here, which makes this show special to me. There’s no other place on the planet quite like Colorado, with rolling fields, steep mountains and deep souls with open hearts.”

Sarah Llewellyn’s history with our state isn’t as extensive as Marie’s, but it’s just as seemingly meaningful. “I lived in Boulder for a year,” says the contortionist/dancer/vocalist. “In that time, I healed on so many levels and found some ground beneath me in order to make some necessary soul level changes. I found a Colorado family who allowed me to be myself, one that held space for me to grow as an individual. Even though I was only here for a year, I felt like I spent lifetimes in the mountains and creeks.” Naropa is a common thread in Llewellyn’s story as well. “I got to study at a college that reminded me on a daily basis that my wisdom could carry me through day to day life. Naropa students are taught to be warriors and find stillness and peace from a heart space.”

Colorado obviously helped mold both performers. Still, Llewellyn and Marie’s true home is among the nomad creatives of Lucent. “When I first met [Lucent founder] Dream Rockwell, I felt like I’d met my long lost soul sister,” remembers Llewellyn. “She’s a visionary who wears her heart on her sleeve and says YES to being a creative rebel. I was in awe that this beautifully angelic being had created such a magical company, one that acts as a platform for performing artists and free spirits to express from their hearts. Lucent scooped me up and handed me a permission slip to express from mine.”

Marie tells of a similar bond with Rockwell. “Dream and I have a deep connection,” says Marie. “We share our most intimate desires and create art out of the love we share for each other and humanity. She has always created a space in our shows for me to be as I truly am. My journey as a human is my inspiration as an artist and this is something Dream gets about about me. We often joke about the future, that we’ll be sitting in rocking chairs one day looking back on all this madness with our hearts full and our faces smiling.”

Witness Marie and Llewellyn with Lucent Dossier Experience this Wednesday, June 11 at Boulder’s The Fox Theatre. You could not possibly be disappointed. For further information, LucentDossier.com