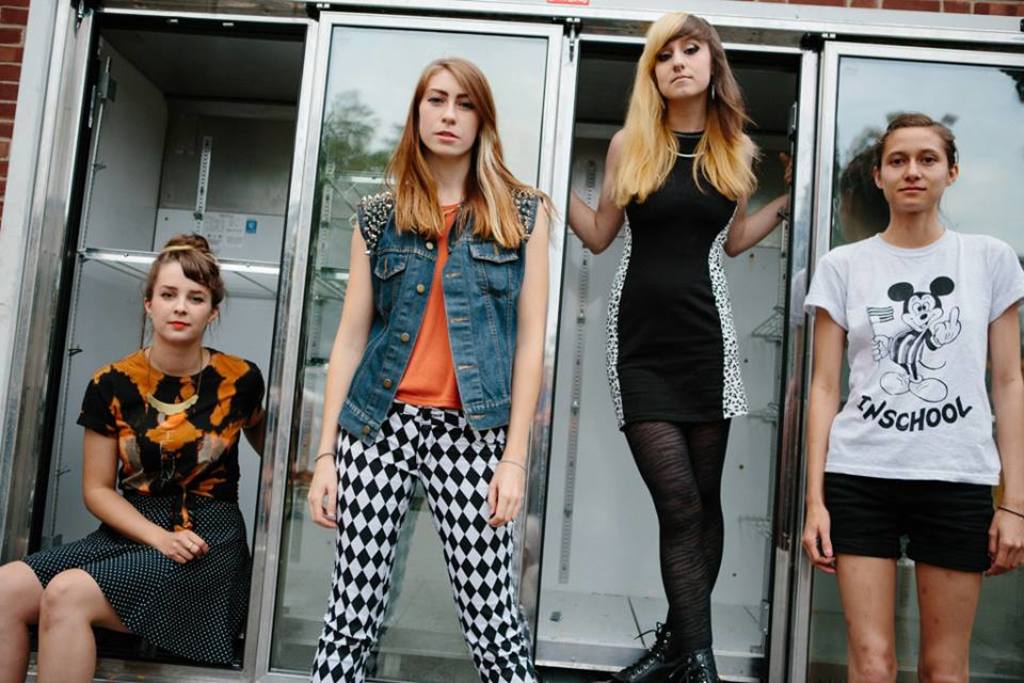 Young, fierce, and ready for whatever, Potty Mouth is basically the band that every house full of girls imagines themselves creating. These four chicks from Massachusetts, Ally Einbinder on the bass, Abby Weems on guitar and vocals, Ali Donohue on guitar and Victoria (Tori) Mandanas on the drums, have come together in a very promising part-Riot-grrrl, part-indie-pop group that has been dosing the East Coast underground scene with plenty of fresh energy and attitude. With audacious riffs and dead-pan lyricism, Potty Mouth falls right between their 80’s punk influences and inevitable Millennial style.

They recently released their first full-length album, Hell Bent, and have since embarked on a national tour to spread their sound westward. The Hi-Dive, at 7 South Broadway, will be hosting Potty Mouth, Perfect Pussy, Colfax Speed Queen and the Strawberry Runners tonight. The show, which is looking to be basically the coolest thing happening on a Monday in Denver, is 16+ and only 10$, with doors opening at 8 p.m. 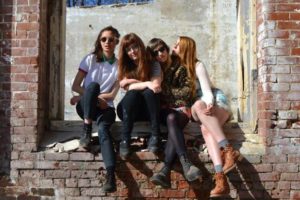 303: So you guys are are currently on your first tour around the country. How is that?

Ali Donohue: Everything is going really well so far. I am really new to the show and only played like three shows with Potty Mouth before we hit the road for the big tour. I’ve never done anything like this before so I don’t have a lot of context to base it off of, but I’ve had a lot of fun so far. Yesterday we played two shows, which was kind of crazy, but awesome. We played a daytime show in Columbus that went really well, and my other band Fleabite played also, who we are currently on tour with for a couple more shows. It was really nice to be in Columbus – we got to hit up a good donut shop, and go record shopping. We’ve had a lot of time in the van, but that has given us a lot of time to make our own weird jokes and weird language. People listening to us talk together are probably like, ‘What are they saying, why are they laughing at these nonsensical word fragments?’

303: So tell me a little bit more about you guys as a group. How did you all get started?

Ally Einbinder: We started in 2011. I had just graduated from Smith College and was working there. I was friends with Abby who was a senior, and it was just an idea we had. I had just started playing bass in two bands and she thought it was cool because she wanted to play guitar in a band. So we decided to do something together, and then we knew Victoria because she was also a student at Smith and knew she was a really good drummer. We knew Phoebe through a mutual friend in the area and she also had an interest in playing guitar in a band. So just like that we messaged Abby and Victoria, and got together at my house for our first practice and started trying to write some songs.

Ali Donohue: Their old guitarist Phoebe, who is lovely, didn’t really want to be on the road that much so they recruited me. I had known Potty Mouth and been a fan for a long time so when I was asked to join it was really a no-brainer. I was like ‘Duh, I can get my shift covered at my pizza-waitressing job and hit the road for five weeks, why not?’ My other bands had played some other shows with Potty Mouth so that is how we knew each other. Right now in Massachusetts, there are a lot of really cool DIY and underground bands, so there is a really nice community there, especially for women playing music. So that is how I got to know who Potty Mouth was and how they got to know me.

303: From the inception, had you guys planned it as being an all-girl group, or did it just happen that way?

Ali Donohue: This is one of three all female groups that I play music in. Sometimes it is intentional and sometimes it is just who is most comfortable to play music with. So its hard to say. But it is hard to overlook that we are four women playing music in a scene or an industry where it is unfortunately still really male dominated.

Ally Einbinder: The decision to be an all-female band was both intentional and based on comfort level, like Ali said. Phoebe and Victoria were both friends of mine, and with Abby, we all knew we were interested in becoming better at whatever instrument we were playing. I was in bands before with men, and it was a nice experience to get familiar with bass, but I was just like playing the taps that someone handed me. So it was really important to me to play in a band with people I felt comfortable with. But when we were brainstorming ideas for someone to take Phoebe’s place, we were only thinking about women, we weren’t thinking about men.

303: The video for “Black and Studs” seems to be pushing back at stereotypes of punk. What would you say is the message you guys were trying to convey with that song and video?

Abby Weems: The concept of Black and Studs was based pretty literally in that we had a lot of friends we knew who wore plaid and vans and were not like obviously punk, then sort of overnight they started wearing like leather jackets with studs and doing like traditionally punk things and changing their ideals to be traditionally punk ideals. It was a comment on that, and how it is interesting that there is supposed to be this one image of ‘punk’.

Ali Donohue: I wasn’t part of that music video process cause I’m new to the band but watching it, it made me think of the Kathleen Hanna documentary where there is this line she says that resonated with me. She talks about how there are girls across the country with all these magical things happening in their bedrooms, and how so much creativity comes from the sort of sacred space that is a girl’s bedroom. What I really like about that video is that is shares that private magic of a young woman’s bedroom to a larger audience. Personally for me, my bedroom is where I like to write songs and get dressed and get creative. I feel like the video really did a nice job of capturing that.

303: What was it like recording your first full-length album, Hell Bent? 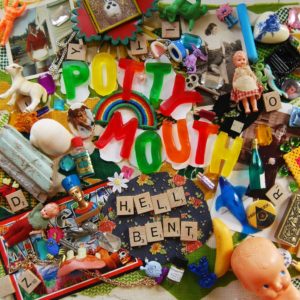 Abby Weems: With the record we knew we wanted to have ten songs to make it our ideal full record, but that was like partially problematic coming up to recording because we didn’t have that many songs. So it put a lot of pressure on writing songs leading up to it. But when we did record, it was awesome and we did a live recording with our friend Will Killingsworth, who is like a local superstar recorder wizard, so it was like really comfortable and a good experience

303: You guys are coming to the Hi-dive with Perfect Pussy on Monday. What about coming to Denver are you guys most excited for?

Ally Einbinder: I have a lot of friends in Denver so I’m really excited to see them. My friend’s band Strawberry Runners is also going to be playing that show with us. They are my friends from Massachusetts who came out here. That is the beauty of touring, because you get to see your friends from all over the country without having to fly out. I’ve flown to Denver before and think it is a beautiful city. I just wish I had more time in every city we go to. Like I want to go on a hike, I want to explore, but I’m really just excited to see my friends and see Denver. It is sort of a progressive place right now in regards to a lot of things, so it is really exciting for us to be stopping through.