Mark it on your calendar, write it on your hand, imprint it in your brain, set it in stone: The second Sunday of each month this summer 303 Magazine is throwing the biggest pool parties of the summer at the Breakers Resort, teaming up with some of the hottest DJs in Denver spinning the best summertime jams for your Sunday Funday. 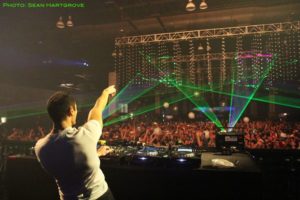 The first pool party, on June 8, features a name that has graced the decks at Denver’s top events and venues: Global Dance Festival at Red Rocks, Decadence NYE, Beta, the Church and Vinyl. We’re talking about Ecotek, who will bring the beats to the Breakers in the official kickoff for Global Dance.

Early bird tickets are already sold out. General admission starts at $20 and can be found here. Bottle service and private cabanas are also available. 303 Magazine is also taking applications for marketing hosts during the pool party series.

The second pool party, on July 13, will feature a surprise national DJ, and for the third pool party, on August 10, 303 Magazine will be celebrating the 10-Years Anniversary in style. Stay tuned to 303 Magazine for the announcements and an exclusive playlist from Ecotek before the first pool party.

In addition to the pool parties, 303 Magazine is holding its DFW Summer Poolside Fashion Series on the fourth Thursday of each month throughout the summer. The first one is June 26 and will have DJ Jenny on the decks with her lounge poolside playlist.