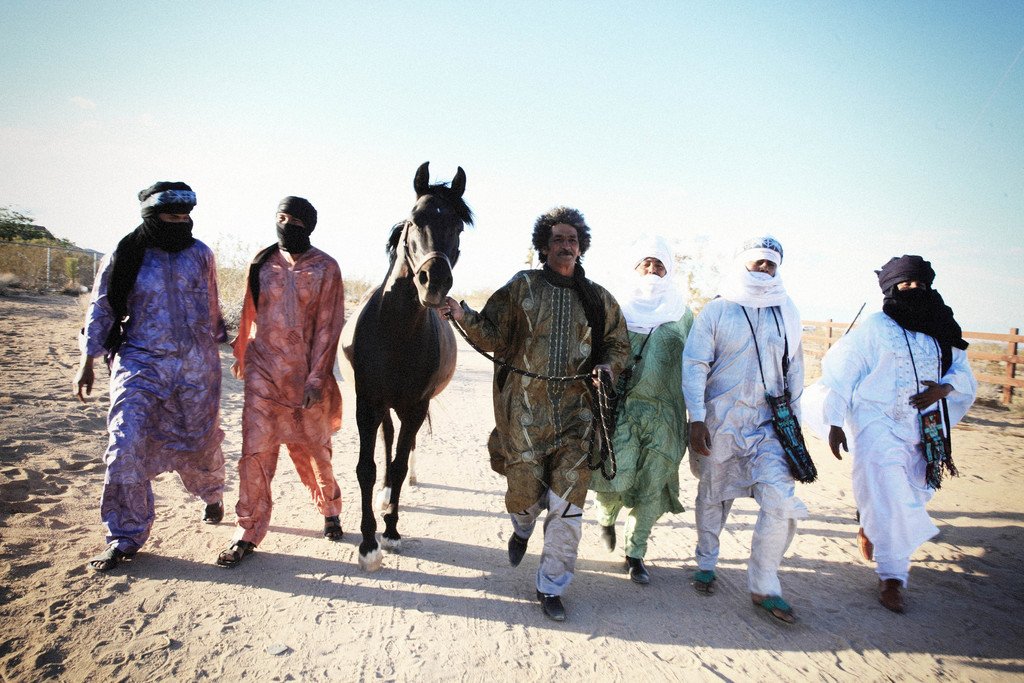 Representing an entire populace of people, African blues-rock band Tinariwen has been making music together since 1979. Although the members have changed over the years, their loyalty—to their homeland in Northern Mali, their culture and their people—has remained the focal point of inspiration for 35 years.

Born out of the dust of the Sahara Desert, Tinariwen has used their music to bring the culture and politics of the Kel Tamasheq people (also referred to as the Tuaregs) to an international audience. The Tuaregs are a nomadic people that frequently migrate between Algeria, Chad, Libya, Mali, and Niger and other counties in the North West region of Africa.

A mix of traditional Tuareg music and western rock, Tinariwen’s sound is enchanting. Featuring hypnotic guitar rhythms and poetry sung in their native language, Tamasheq, their sound doesn’t veer too far from its humble beginnings. Founding member Ag Alhabib grew up isolated in Northern Mali and didn’t know what a guitar was until he saw it in a Western movie. Later, he became exposed to the music of Jimi Hendrix and other varieties of American-blues which shaped the sound of Tinariwen today.

Their latest album Emmaar, released in February of 2014, is a testament to the turmoil that has taken over their homeland. It was the first album of seven to be recorded outside of the Sahara Desert due to political unrest and dangerous conditions—especially for musicians. Islamic extremists have taken over the area in an attempt to enforce their ideals on the people of Northern Mali, including banning music and threatening musicians. Tinariwen member Abdallah ag Lamida was kidnapped by extremists (and has since been released) preventing him from appearing on Emmaar.

303 Magazine had the opportunity to speak with Eyadou Ag Leche via e-mail with the assistance of a translator about what inspires their music and recording in a new desert for the first time with new, Western friends.

303: Tinariwen is known for bringing worldwide attention to the culture and politics of the Sahara region of Africa, does Emmaar represent a specific message associated with what’s happening politically in Northern Mali?

Eyadou Ag Leche: Our songs are 50/50 a mix of ancestral Tamasheq (our language) poetry, with themes like our desert, exile, love … And they talk about the current situation in Mali for our community. For instance, Toumast Tincha (means in Tamasheq ‘the people has been sold’) has been written about these recent events … Emmaar means in Tamasheq what you can feel while you are close to a fire: both pleasant and dangerous. Closer you may get burnt; adding distance you may not feel it anymore. We think it sums up the current situation of our place, it is a metaphor for the tension.

303: In 2012 the Tuaregs rebelled against Mali—what happened after the independent state of Azawad was created?

Eyadou Ag Leche: We are currently following carefully the international talks happening … We hope for them but are not naive at the same time. We want the Tuareg community to get involved in these talks and not put aside of those, which is what has been happening during these past decades … It’s fundamental to a safer future.

303: Emmaar is your seventh studio album, but the first to be recorded in the U.S. Can you explain why you decided to record in Joshua Tree instead of the Sahara?

Eyadou Ag Leche: Sahara was too unsafe for our crew, so we’ve decided to record elsewhere. We wanted to record in another desert. We need this environment to get inspired … We have a friend in Joshua Tree and decided to record live in his home. We felt at ease there with the desert elements, a specific air, the silence, sand, rocks … We had good conditions to record the album, but with our own desert in our hearts, as always.

303: Now that you have toured internationally, are there any musical influences you have picked up from other regions of the world that you now incorporate in your music?

303: There are some special guests featured on Emmaar. How did you hook up with The Red Hot Chili Peppers’ guitarist Josh Klinghoffer and fiddle player Fats Kaplin?

Eyadou Ag Leche: Most of the guests on the album are musicians we met while touring in Europe, in the US. On the road, when we feel good connection, we jam altogether and when something good happens it’s even better! Even if we didn’t know most of them years ago, it was an honor playing with such talented musicians Fats Kaplin, Josh Klinghoffer, Matt Sweeney, or hearing the voice of Saul Williams … At home we don’t have doors to our tents, we’re always open for sharing with others, especially when something great happens!

Written by Erica Lindberg of 303 Magazine