Dr. Dog, the six-piece neo-psychedelic/indie band out of West Grove, Pennsylvania, got their first record into the hands of My Morning Jacket front man, Jim James, after a show and were eventually invited along for two tours.  They have since released seven full-length records in just over a decade and have been all over the concert circuit playing headlining tours and music festivals across the globe. 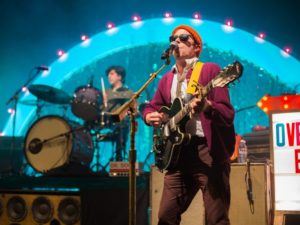 Dr. Dog knows a thing or two about fusing musical genres. The band managed to combine a very cool combination of rock and acoustic numbers into their set on Saturday night at Boulder Theater, playing a range of their biggest hits to an enthusiastic, sold-out crowd that cheered and danced wildly throughout the night, singing back every single word.

Dr. Dog’s sound is strongly influenced by bands such as The Beatles and The Beach Boys, but they also successfully incorporate a blend of other genres. Their music is part folk, part psychedelic, part experimental, part jam, part retro and part fundamental indie-rock. It’s a challenging fusion for any band; a mix that can only work with the proper talent and technique. 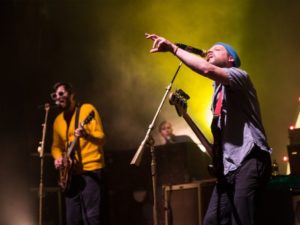 Dr. Dog continued to roll out hit after hit, from “Shadow People,” and  “Jackie Wants a Black Eye,” to “Lonesome,” also including a solid selection of songs from B-Room, their most recent album, released in 2013.  Each song seemed to amp the crowd up more.

When this band rocked, it captured every nuance of its musical inspirations, and when the group performed its acoustic numbers, the ballads showed off their knack for heartfelt and relatable lyrics.

Saturday night at Boulder Theater, Dr. Dog’s performance was both energetic and honest, and you could hear (and feel) a complete appreciation for the band among their sold-out crowd.