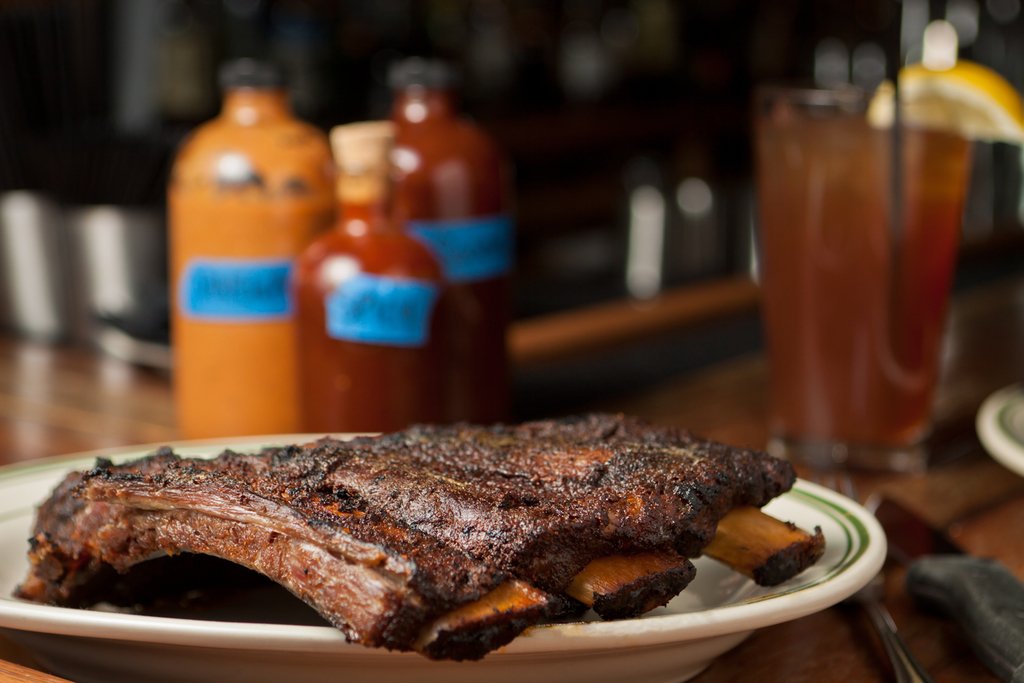 Table for Two: Nothing Says Romance like Slow Cooked Meat at Russell’s Smokehouse

Pros: If you are a BBQ fanatic like we are, you’ll love the fact that they have three house made sauce choices on the table when you arrive.

Cons: If you are dating a vegetarian, you may have limited options here, since it’s a smokehouse. Last time I checked smoking veggies wasn’t all the rage.

If you are walking down Larimer Square at night, you just might miss it. But down the stairs and through the secret doors between 14th and 15th Street, and we stumbled upon some of the best barbeque in Denver. What was once a speakeasy many years ago is now home to a smokehouse and local pie shop. Boasting a historic atmosphere and a great menu, Russell’s Smokehouse is a great place to take a date.

When we were shown to our booth, three different homemade sauces sitting on the table greeted us and were waiting to be devoured. Our server later told us that everything on Russell’s menu is made in house, from the breads to the smoked meats.  For being a small and intimate location, Russell’s has an impressive, huge kitchen.

No matter if your date is a big drinker or not, Russell’s has you covered. Their drink list boasted “Any-Age Thirst Quenchers” and House Cocktails. All were mixed with homemade juices and mixers. My boyfriend went with The Wheelhouse, a Leopold Bros concoction with American Orange, honey and iced tea. Although it was served on ice, it had a bold and almost spicy taste that made for a great winter cocktail. While he normally has a spicy palate, I would suggest something different if you are looking something smooth to drink. I went with the Czech Mate. Made with Russell’s own six year Rye, homemade Apple Shrub, Becherovka (a Czech Republic bitter), lemon and chamomile soda, the Czech Mate cocktail was a delicious, light mix that went down smooth and fast.

Everything on Russell’s Smokehouse menu looked appealing. Even their Starters menu had its share of meats. Between Brisket Sliders, Pigs in a Blanket, and the House Sausage Plate, you’d get your fair share of BBQ from the appetizers alone. We decided on the Loaded Chips, which was essentially a mound of homemade BBQ chip heaven. Russell’s homemade potato chips were crispy and tasty, topped with barbeque pulled pork, tomatos, peppers and melted Gorgonzola cheese (no cheese whiz taste here). They were filling and gooey goodness.

One of the many reasons why Russell’s Smokehouse makes for a great date is that you can share a ton of food and still feel absolutely satisfied. My boyfriend and I settled on splitting the Combo Plate with a side of Homemade Mac and Cheese. If you are undecided, the Combo Plate is the best way to go, as Russell’s gets to showcase all of their awesome meat choices on one entrée. We were delighted when the plate arrived with Brisket, Pulled Pork and Smoked Chicken, accompanied by house coleslaw and baked beans. Each homemade BBQ sauce fully complemented the meal. The meat was cooked to perfection. I continued to enjoy my meal as my boyfriend talked smoking techniques with the server (he’s a BBQ nerd).

As if the night couldn’t get any better, Russell’s Smokehouse is adjacent to Wednesday’s Pie, and Russell’s offers slices as their dessert menu. We were treated to a delicious slice of Caramel Apple Pie a la mode. It was the perfect end to a great evening. Russell’s sleek and low lit interior matched its rich and smoky menu and would get the seal of approval from any BBQ lover.