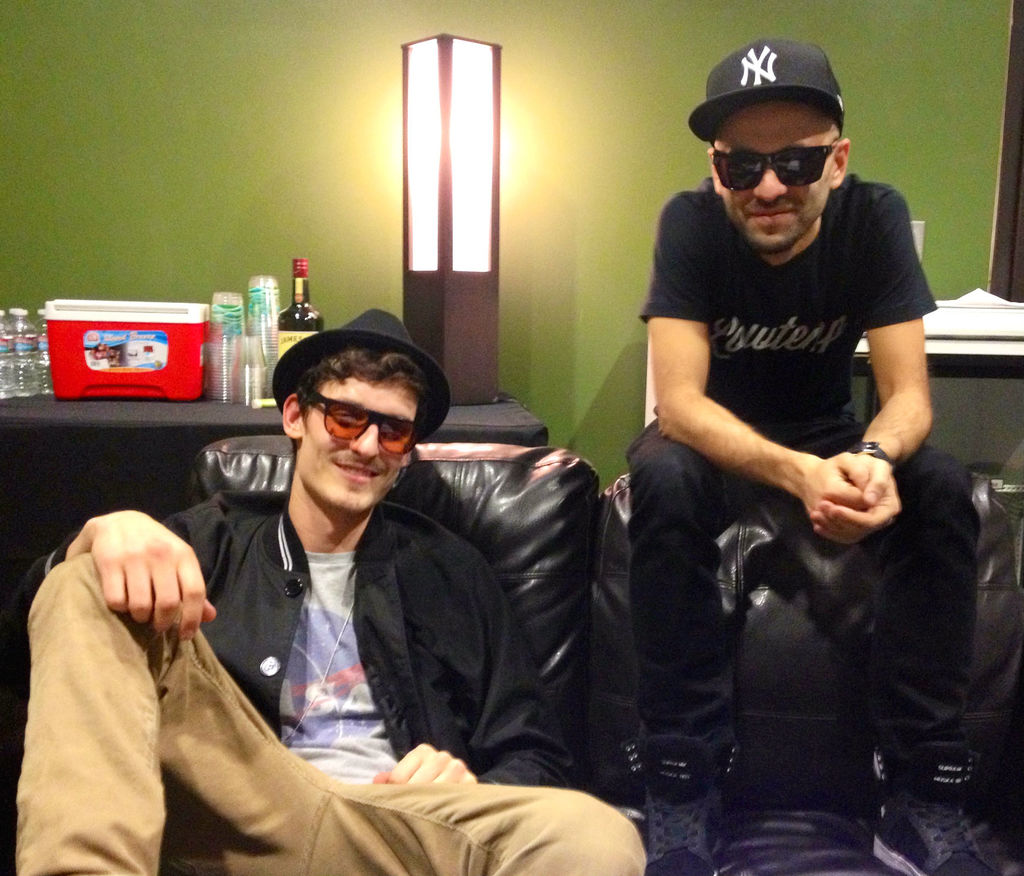 Brain Pickin’: Grizmatik Puts the Music Back in EDM

On Halloween, the First Bank Center shook from the floor to the ceiling, courtesy of Grizmatik—the electronic super-duo comprised of EDM producers Griz and Gramatik– who came to Colorado for their biggest Grizmatik show yet. GRiZ is 23-year old Grant Kwiecinski, originally from Detroit who now calls Boulder home; and Gramatik is Denis Jasarevic, originally from Slovenia now living in NYC.

Grizmatik morphed from two separate artists accidentally throwing together the best joint electronic set at the Electric Forest festival in 2012 to the fan-named supergroup that slammed thousands of costumed concert-goers in the face with heavy drops, soulful samples, electrifying GRiZ sax solos  and some solid bass guitar last Thursday night.

Since its inception, Grizmatik has been in high demand by fans wanting more of this magical union of the DJs they love separately. I was fortunate enough to be able to hang out with these two laid back (and rather comical) guys in their green room before the show for the first-ever Grizmatik interview. Check out what GRiZ and Gramatik have to say about the culture of their industry, their spirit animals, Louis C.K. stand-up and the importance of making really great music.

303: So how did this Grizmatik entity start?

Gramatik: Is it? At Electric Forest, I guess. This Song is Sick was sponsoring the secret stage and I remember us talking and saying ‘hey, let’s just go up and do this together.’ We were both on tour and had just made a song together so it seemed natural to just do it.

GRiZ: We both had worked with a lot of other musicians before but we were never thinking like, ‘okay, we just did this song together, now we should make this massive collaborative project.’

303: Well you sound dope together, I mean your music just sort of flows together, so did you get up there that first time and just have fun?

Gramatik: It just happened without us even wanting it to happen. We never named it Grizmatik, people started hash tagging that on Twitter. And then it became such a popular thing that when it came time to release the song, we were like ‘should we just drop it as Grizmatik?’ And we both said fuck yeah let’s do it. And because of that massive set at Electric Forest, which became the talk of the festival, our agent started getting offers for Grizmatik shows—like HUGE Grizmatik shows and we’re like shit, okay! So then it just became what it is.

Grizmatik is way bigger than just him or me. 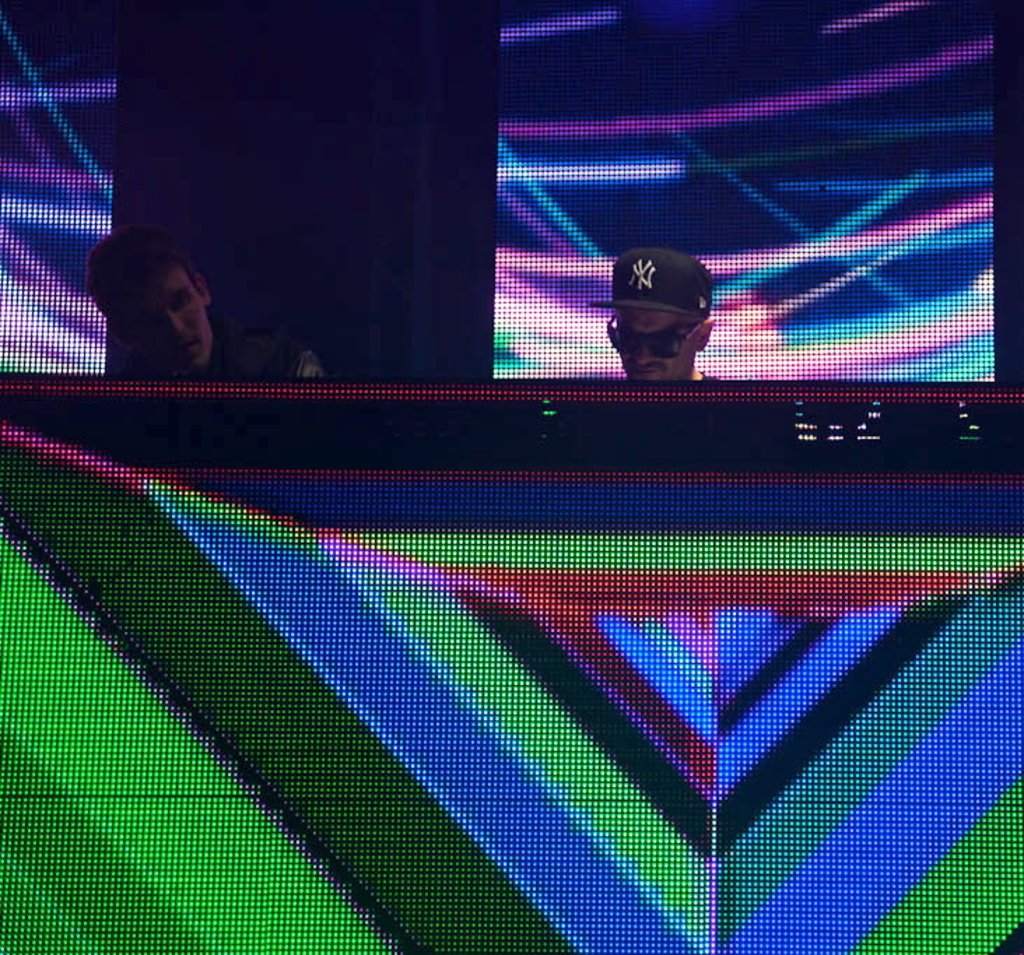 303: Your fans, who love both of your music, obviously love the idea of this supergroup and are always wanting more, how do you balance your solo careers with the demand for more Grizmatik?

GRiZ: We want it to be fun you know?

303: And you guys look like you have fun. During your sound check it looked like you two were up there having a blast.

Gramatik: That’s how it started, the reason it looks like that is because we do have fun.

GRiZ: It always comes back to the music and I think that you sit in a room with someone and listen to music and just vibe. I feel like Denis and I have a similar ear for things we think sound good. And it’s always about making good music, making grooves that both of us just really feel.

Gramatik: We made that first track pretty much overnight on the bus and it just flowed. And I was like ‘this is awesome!’` And that was “Digital Liberation is Mad Freedom.”

303: GRiZ, you just released a full length album Rebel Era, Gramatik released a song with Cherub and you both released the video for the track, “My People,” do you guys ever sleep?

Gramatik: Barely. I mean I sleep for like 4 or 5 hours a day—sometimes two days.

GRiZ: Recently it’s been less. Most of our time is spent listening to music and making music. And sleep is just secondary- just something to keep you alive.

Gramatik: That’s why I can’t have a girlfriend. You just become socially awkward. [laughs]

GRiZ: It’s difficult to have relationships with people outside of the music world. It’s really hard to foster relationships in this industry.

Gramatik: The person has to be as fucking nuts as you are to put up with this shit. 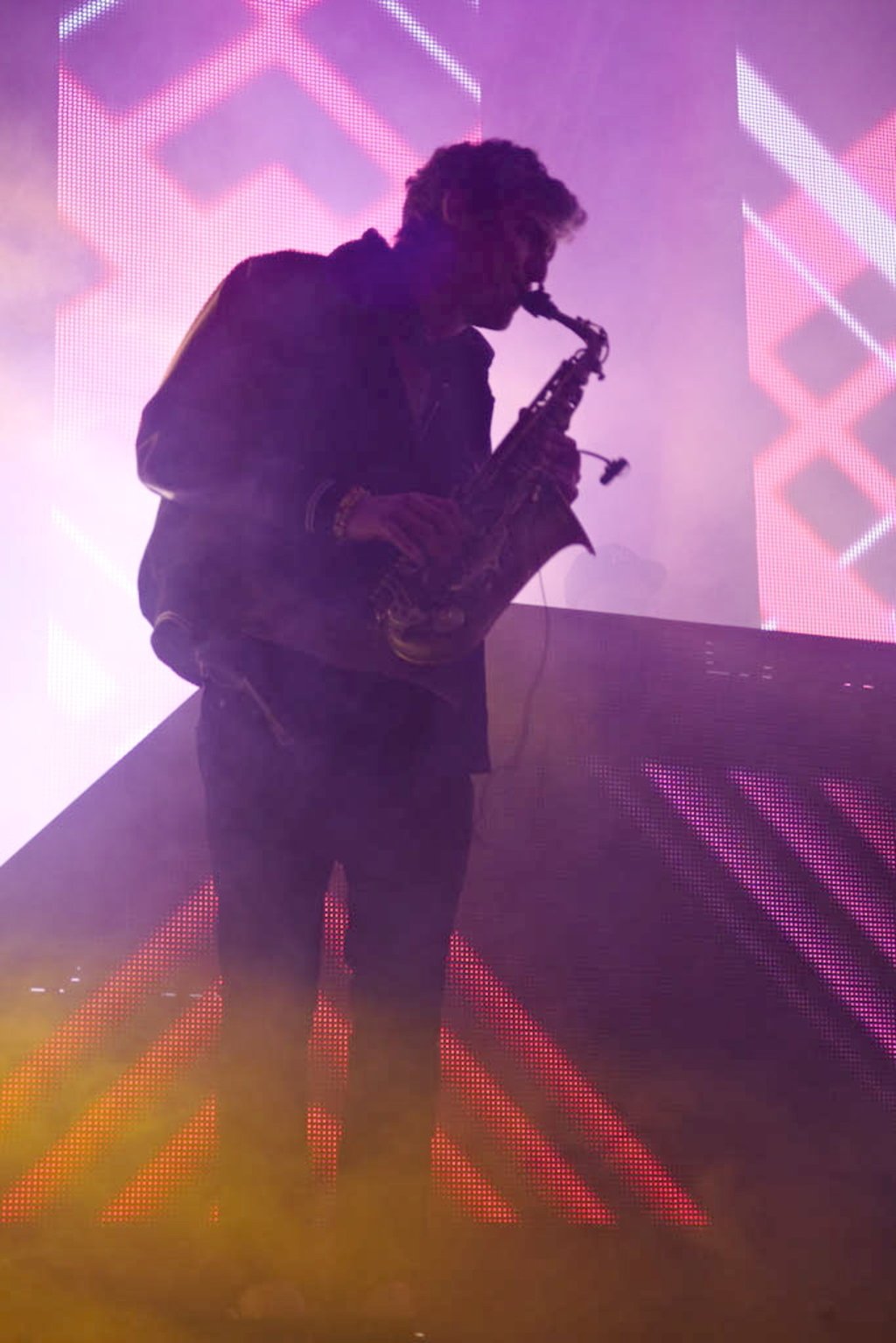 GRiZ: Yeah. Denis has his own record label as do I and so we’re doing that all the time as well. It’s just like ‘oh, we’re not busy enough so let’s put something else on our plates too!’

Gramatik: There’s nothing else to do.

Gramatik: And we definitely don’t agree with all aspects of this industry.

GRiZ: I mean for me, I just want to take the E out of it and just make dance music.

Gramatik: Or put the M back into EDM.

303: And you are.You’re adding live instruments.

GRiZ: That’s hard too, putting the M back in, because you could argue that a lot of the EDM is musical–it’s just very sterilely musical. There’s not much soul to it.

Gramatik: People get so focused on the technical side of it that they forget that music is supposed to be about an idea rather than just a drop and a riff–not just bass blasting and causing arrhythmias in the front row.

303: That’s got to be crazy to see from your angle, all of those wide drug-induced eyes shifting left to right.

GRiZ: That’s not even the worst part. The worst part is when you see people after the show and you’re like what did I just do to you? Some of my most fun shows have been the 21 and up crowd when you have the meet and greets after and you don’t necessarily have all of the saucer-eyed kids. I’ll be honest, I enjoy myself once in a while, but it comes to a point of sorrow when you recognize that a lot of your job deals with kids’ desire to delve into that dark side.

303: And to many of them it looks like you’re just up there smoking blunts, drinking champagne and living this crazy musician’s lifestyle but they don’t see you working your asses off to make this stuff.

Gramatik: Exactly, there are thousands of people coming to our shows and you feel a responsibility to help them have fun but to be cool about it, you know? Stop taking it to extremes. There are a lot of artists that instigate that behavior. And if we don’t say something about that then our whole crowd has just become savage.

303: And all you’re trying to do is just make good music.

Gramatik: Yeah and inspire people to do whatever it is that makes them happy. We don’t necessarily get inspired by music to make music, we get inspired by anything: art, affection, life… anything.

GRiZ: I want to take music and make it a driving force to inspire other people.

We’re trying to make a culture out of this.

Gramatik: Music is something positive. Not something just for taking drugs. Don’t make that your thing. Our fans are young, they’re going to mature and grow up with us, we want to see them doing good stuff.

303: I have a weird question for you guys. What are your spirit animals?  Which is an animal that you each think embodies you.

Gramatik: What about a dolphin? Dolphins are cool. They’re like the second smartest animal on the planet.

GRiZ: Have you ever seen The Cove?

Gramatik: No, but I watched Flipper religiously. That’s when I fell in love with Jessica Alba– in fourth or fifth grade.

303: So what’s the Grizmatik spirit animal?

GRiZ: A zombie? A dolphin-bear?

GRiZ: Do you guys watch Parks and Recreation?

GRiZ: (to Denis) Aziz Ansari puts an iPod on one of those robot vacuums and calls it DJ Roomba, it’s hilarious. Have you seen that Louis C.K. stand up where he gets super high with those high schoolers after his show and is over thinking everything and super paranoid?

Gramatik: Yeah and he wants to leave but is afraid to break the circle. (Laughs) I love him, he’s so funny.

GRiZ: You should hang out with him.

Gramatik: If only it was that easy.

GRiZ: But, seriously, every state should do what Colorado is doing with weed. You really don’t see people get too high and do something horrible. I mean, what’s the worst that happens? You take a nap?

Gramatik: You forget shit and you get hungry.