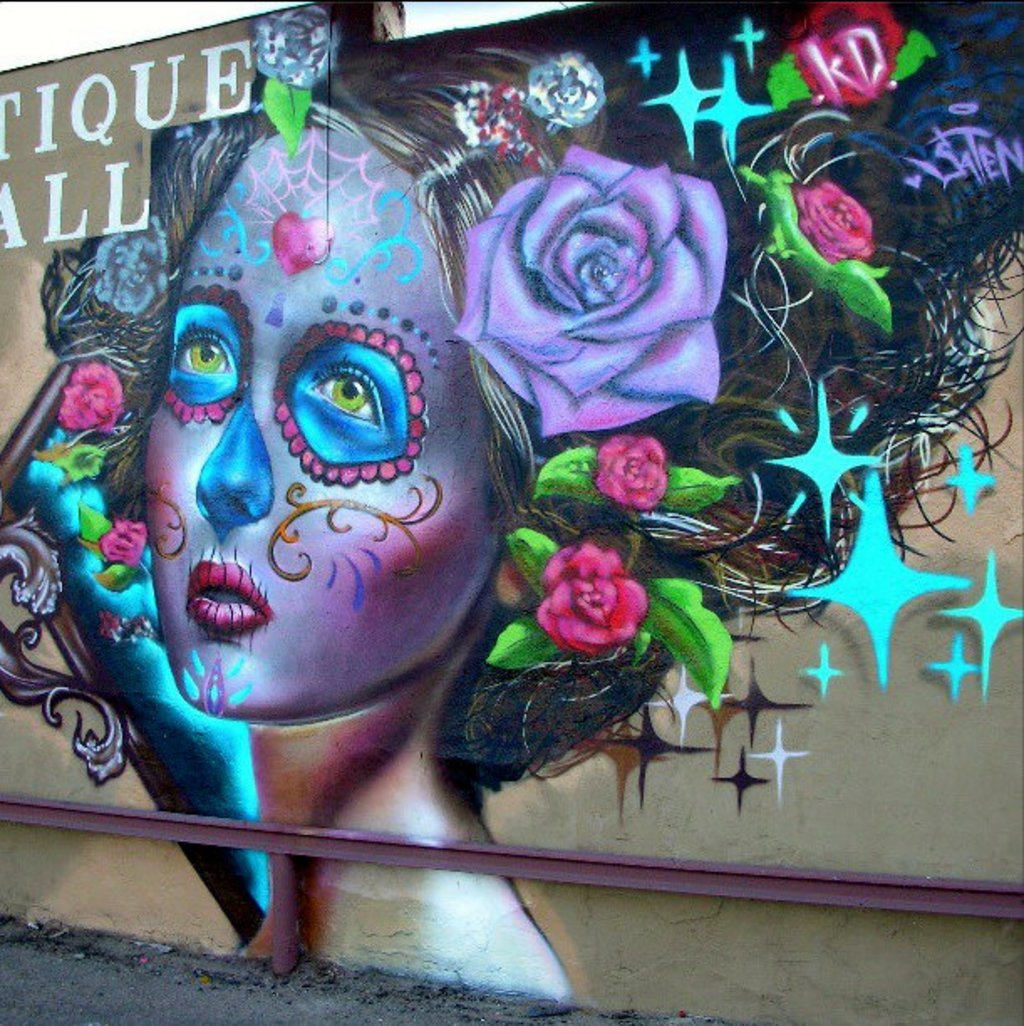 The art scene in Denver has been receiving more cred than ever lately. To push the boundaries on architectural expectation is to push the boundaries on the way we view and interact with the world. It also serves as a way to avoid illegal tagging in our city. Sanctioned murals do more than brighten the streets: they claim the walls they are on. If it’s a good piece, fellow artists have mutual respect and the wall remains untouched. Here are some great multi-modal pieces, everything from wheat-paste to spray paint, that deserve the Concrete Canvas spotlight.

Saten runs with Kings in the Denver Art Scene

Saten’s work is most often expressed in portraits and hyper-realistic animal characters. Regardless of subject matter, Saten knows how to make a political statement. This feminine, flowery, sugar-skull is one of my absolute favorites.

You have seen his work in the popular collaborative Mickey Mouse/George W. Bush homage, done with locals Eaks and Bits. Saten painted the birds as well as the brilliant yet controversial portrait in the center. Friends of Saten and fellow artists Eaks and Bits tied the piece together with bold, abstract letters, and unexpected surreal elements. It is one of the most famous pieces in Denver, and it is absolutely worth seeing in person! Find it for yourself in the alleyway on 8th and Santa Fe.

In his own words, Saten explains his interpretation of the ominous symbol in this mural:

“It’s a comment on how the older generation of popular culture is dying out. I’ve called it The Death of Mickey.”

Hailing from Harlinger, Texas, Saten hit the Denver street-art scene in 2011. He found the community, the environment, and fellow artists to be very welcoming. The scene here in Colorado has grown exponentially over the past few years since his arrival. Saten is part of two local artist crews, KD (Kings Destroy) and TKO (True Kings Only).  You can see the colorful, exciting, and street-celebratory work of KD and TKO all over town. 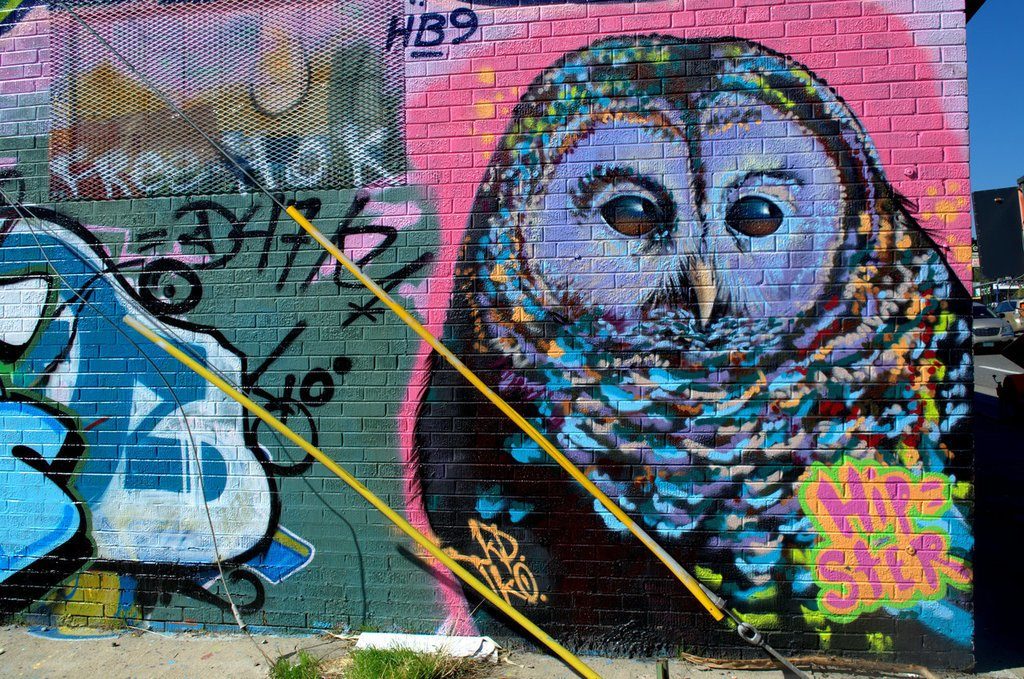 An owl, one of Saten’s signature designs, peaks out through the alley. This piece, finished August of this year, is on the East facing business wall on the 2700 block of Alameda. All artists on this decked out wall are ones to watch out for in Denver . Check out more work by Saten and the artists of TKO and KD here, as well as in the alleyway on Larimer and 26th. The crews freshly painted murals for Colorado Crush 2013.

Harlequinade’s creator Doug Nox recently graced Denver with a trio of shaman-esque pieces, found on Lowell and Morrison near Federal.  Harlequinade is a loose collective of artists based out of Philadelphia who predominantly wheat-paste amazing and complex prints on the American urban landscape. They harness the raw power of Dionysus and deck walls with his magic and positive energy. 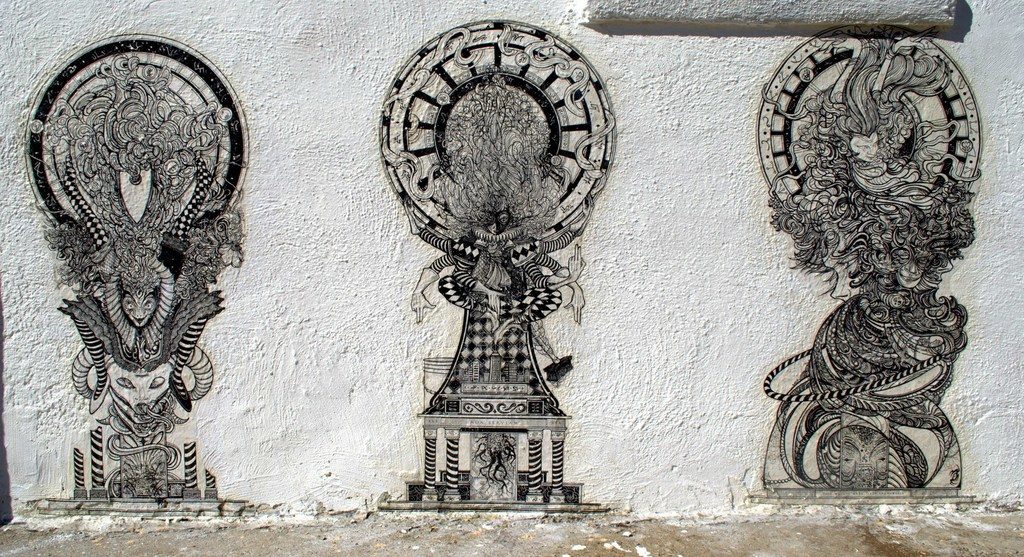 The pieces are black and white deities with intricate patterns, also with hidden QR codes (scannable on your IPhone). The concept of a QR that leads the viewer to a website is wildly modern, and adds an entirely new dimension to the experience. Nox’s QR code doesn’t interfere with the piece. In fact, you barely even see it. Harelquinade’s style comprised of super detailed, black and white arabesques lends itself perfectly to using the QR code.

Nox believes art has a much stronger shamanic power outside of traditional gallery settings. The pieces aim to add imagination and power to every spot he paints, calling the images “portals.” Are they street-artists, are they witch doctors, or a combination of the two? Harlequinade succeeds in taking the passerby, as their website claims, to, “The forgotten corners of the city … the forbidden recesses of the mind.” 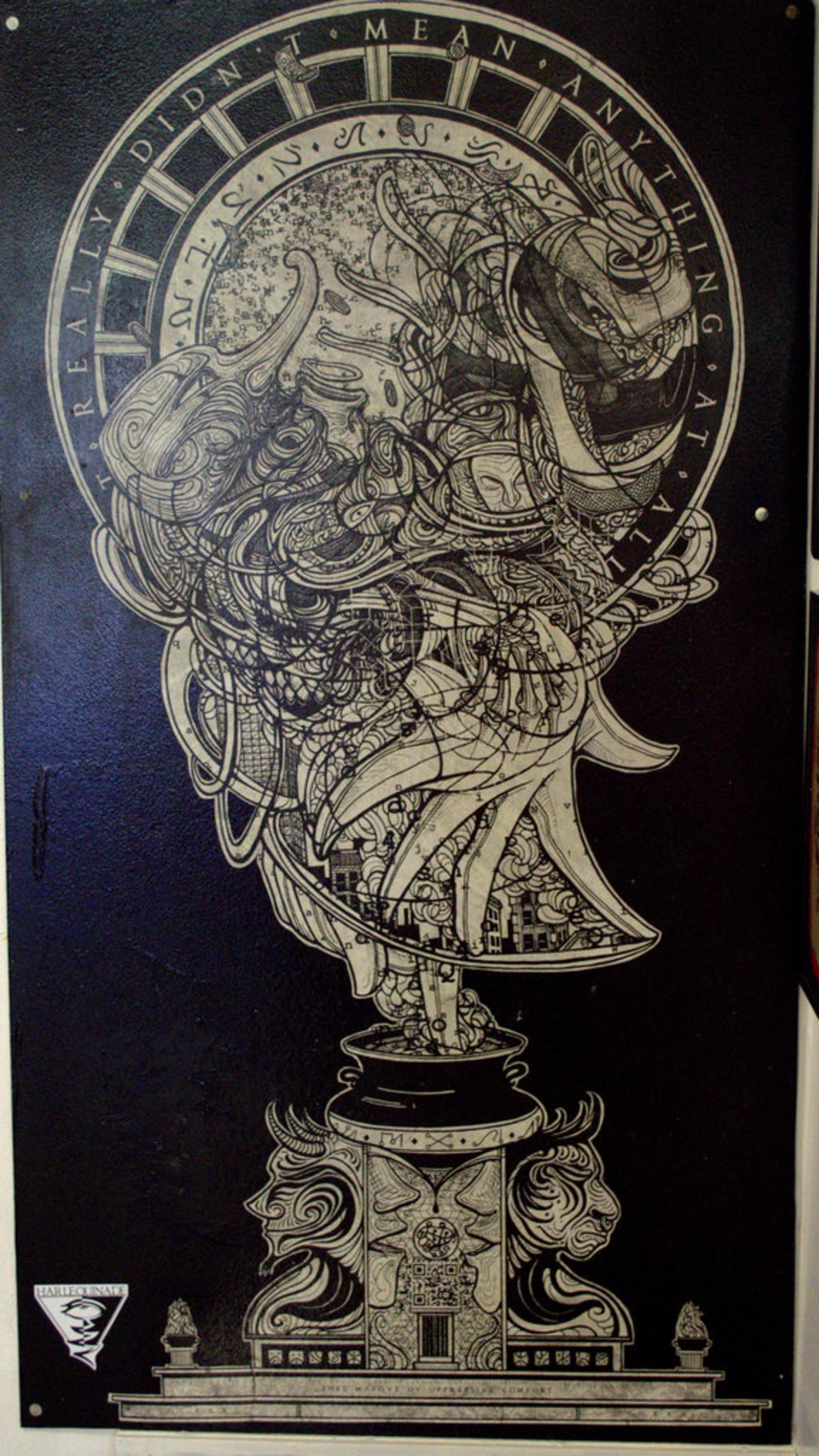 The tiny QR code unlocks a colorful GIF that you can only get to through scanning it on a smartphone QR reader. I love the addition of technology to the street art experience. It makes me think of a modern museum guide, but the museum guide of the streets. I had to download a reader in order to see the GIF. I also ventured into Black Vulture Tattoo Shop to find the fourth shaman piece (above). This print is an inverted white on black. Each character is different, bringing different energy to the spot it is pasted.

The Barnum Mural by Pheud

Poetik Sol also known as Pheud did this Barnum Mural in April of 2012. I had yet to see the piece in person and was blown away.

This block paints an image of cultural diversity, one made poignant and deliciously absurd by the circus scene. Barnum adds color to the block and is found right down the street from the above mentioned wheat-pastes by Harlequinade. The clown was reminiscent of an FX piece done for Colorado Crush this past year, but just in stylistic design, not in meaning. Take advantage of the beautiful weather and see the piece located on Morrison and Alameda, while you still can.

Tune into Concrete Canvas to see amazing, local, and international street-artists. Follow 303 Magazine on Instagram and search the hastag #303graffiti for more beautiful works seen around the city. 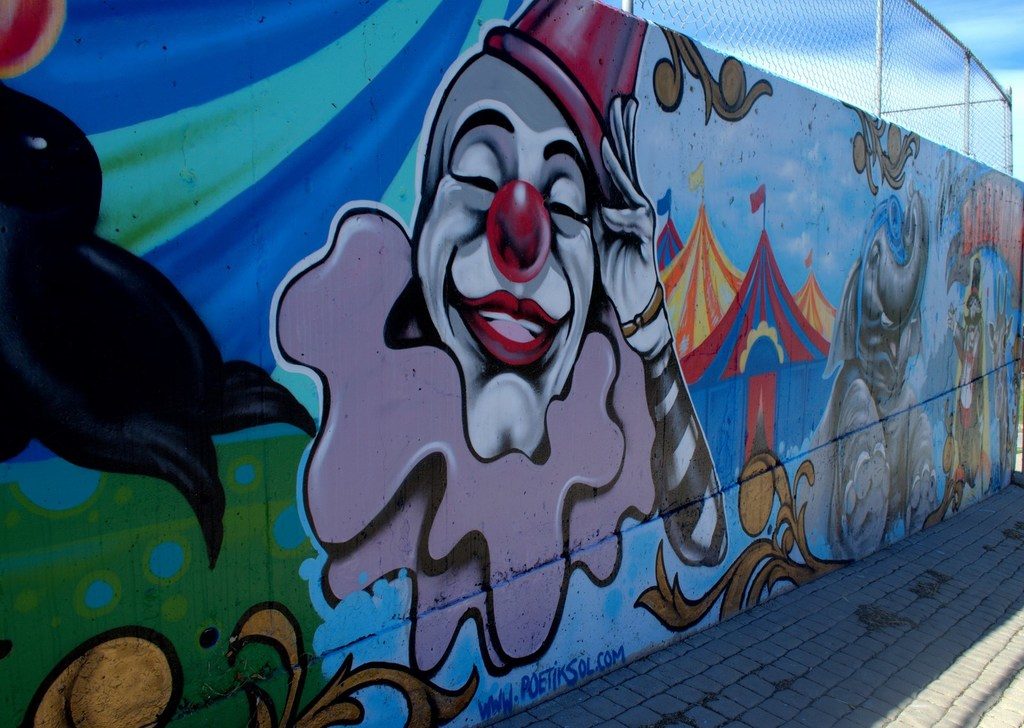