This summer has seen the release of two excellent coming of age stories: “The Way Way Back” and “The Spectacular Now.” I adore this type of film, it makes me reflect on my own childhood trials and tribulations and usually ends on a tidy high note. I recently saw “The Way Way Back” and was satisfied, as it did remind me of my childhood and ended pleasantly. The film was entertaining and sweet, but by no means was a thought provoker. I went into “The Spectacular Now” hoping for the same, but was surprised and blown away at the difference in these same genre films. 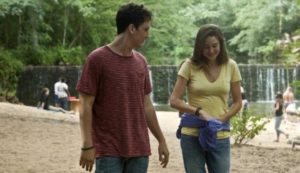 “The Spectacular Now” is not a typical coming of age story. This film comes laced with poignant truths about family, addiction, love and living in the present. The focus of “The Spectacular Now” is Sutton Keely, a charismatic yet disturbed high school senior, played excellently by Miles Teller. He appears to have all the components for success: likeability, brains, humor and charm for days. However it soon becomes apparent that his soda cup, a fixture in every scene is spiked with hard alcohol. He becomes increasingly dependent upon it like an extension of his childhood pacifier.

When Sutton meets girl next door Aimee, played equally as brilliantly by Shailene Woodley, she unintentionally shines a light on his phony exterior, baring his roots. Deep roots seeded in a broken home. Both heartwarming and tragic, this film cuts like a knife. I left the theater thinking of my own familial roots, life choices and ability to live in the present.