Brain Pickin’: Varlet Brings the Party to the Hi Dive 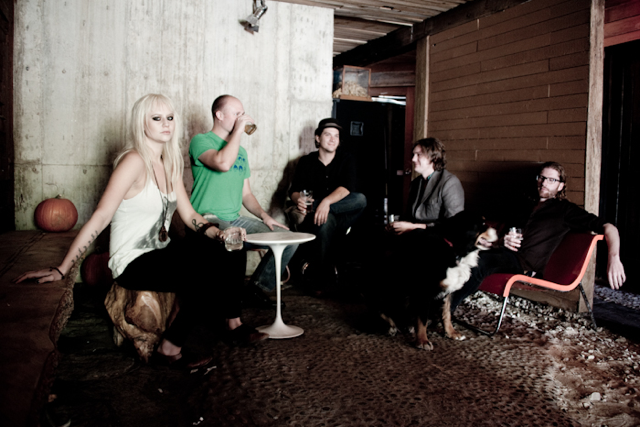 Denver’s Varlet, a five-piece indie rock band, will release its debut full-length album, American Hymns, this Friday Sept. 27th at the Hi Dive. Although the band spent about 10 days recording the album at Hideaway Studios in Sedalia, Colo. in February of this year, the album is finally ready for release after a very successful Kickstarter campaign.

The album was produced with the help of Varlet’s friend and engineer James Barone of Tennis and Tjutjuna. American Hymns promises to explore a marriage of dark lyrical themes with bright instrumentation, blending folk, rock, jazz, psychedelic, and a little doo-wop the way only Varlet can.

We caught up with Varlet’s Lily Scott to find out what fans can expect from Friday’s show and what creating American Hymns was like for the band.

303: According to Varlet’s Facebook page, varlet is a Shakespearian word meaning a rogue: a deceitful and unreliable scoundrel. What made you choose this name for your band?

Scott: I’m fascinated by Shakespeare and admire the thousands of words he created for the English language. As a lyricist, you try to be extra creative when conveying your message and I always thought that the word “varlet” was such a lovely word with a nasty meaning. The definition really fits the music we write.

303: What are some songs/artists who have inspired you?

Scott: We are all heavily influenced by Tom Waits, The Kinks, Harry Nilsson, The Beatles – songs with lyrics and melodies that are extremely expressive and un-censored. I personally am infatuated with ’40s and ’50s music, jazz standards, and psychedelia. Artists like Billie Holiday, Woody Guthrie, Doris Day, and I adore Broadcast. We tend to mash together all of these different muses and take it to a trippy, weirder zone.

303: What is the best part about being Denver musicians?

Scott: Being eccentric and different is embraced in Denver and it’s wonderful. Every musician seems to know one another somehow and everyone is always down to play with one another, regardless of the genre. It’s a very supportive network here and it feels amazing to be a part of it all.

303: What was your creative process like when creating American Hymns?

Scott: It all seemed to write itself incredibly fast. We’ve been experiencing so much together in the past year and the inspiration has literally been pouring out. We’re jamming/hanging three to four times a week for 5+ hours at a time so we really have put a majority of our lives into this record. The five of us are so close and you can feel it when you listen to the album.

303: What makes American Hymns different from your previous albums?

Scott: American Hymns is unlike anything we’ve released before. The sound that we’ve been dreaming up in our heads actually exists now and we all vibe on the same expressive wavelength. Each song on the record has its own story, yet they all correlate to the same idea – Trying to liberate yourself physically and emotionally in a country where it feels impossible to do so.

303: What can fans expect from your show this Friday?

Scott: Fans can expect to get crazy!! We have an incredible line up at one of Denver’s most fabulous and fun venues. We have several surprises up our sleeve for this specific live set and want fans to be walking out sweaty, sticky, and buzzed. The audio and visual live experience is the most important to us and we are thrilled to be playing the new record full time now!

303: The album cover art for American Hymns is fantastic. Could you tell us more about why you chose this art or this artist?

Scott: Jacqueline Sophia Cordova is one of our longtime friends and her talent is incomparable. When we saw the pieces we chose for the record and promo, we knew they were perfect. Her piece “Eyes Of God” that we picked for the album cover was so expressive and accurate for the album that we chose to keep the reverse side white. We are releasing the record on limited edition 180-gram gatefold vinyl and it looks stunning thanks to her!

303: If you could only listen to one song or one album for the rest of your life, what would you choose and why?

Scott: Extremely hard question, but I would be satisfied with The White Album by The Beatles. Two records, 30 unbelievable songs, never gets old.

–Varlet plays at the Hi Dive this Friday Sept. 27th with Tijutjuna, Attic Attack, and Champagne Charlie. Doors open at 8 p.m. Show is at 9 p.m. Tickets are $10.