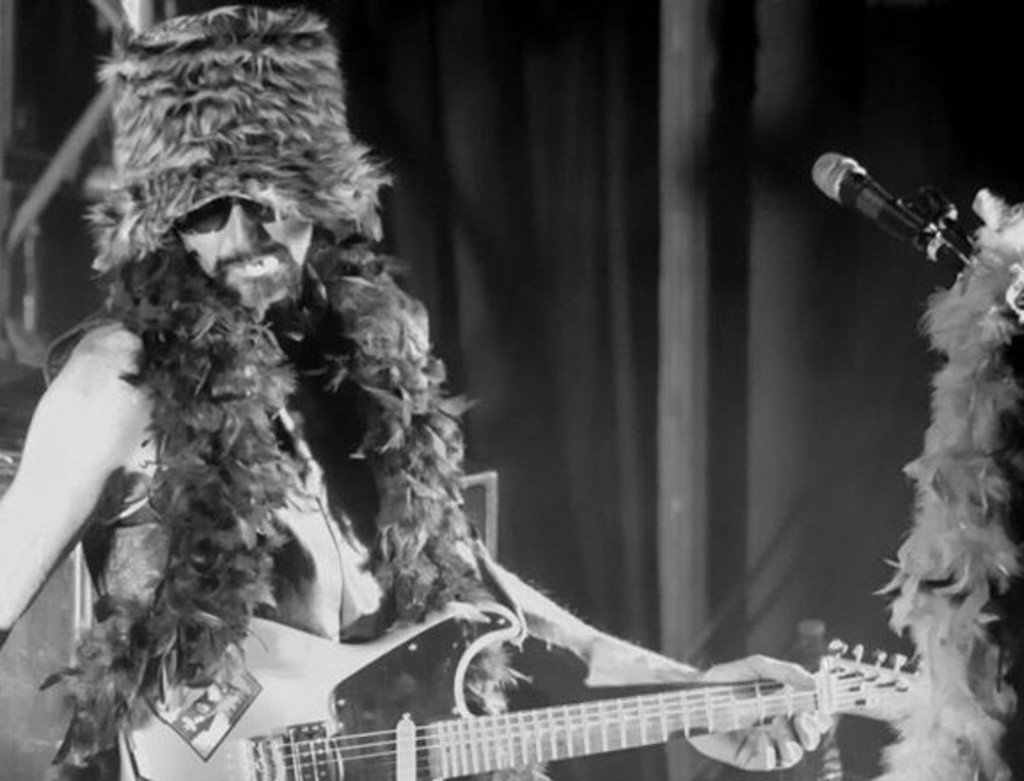 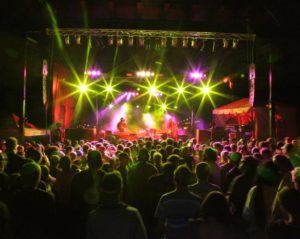 It’s the beginning of the end, folks. Another stellar summer of frequenting Red Rocks each weekend for wild dance parties and occasionally popping in during the week for a film or some yoga. All good things must come to an end? I have always hated that expression. Anyway, BoomBox is back in town to wrap up this year’s Red Rocks season in style. They will be playing along with Lotus and Minnesota this upcoming weekend on Friday the 13th (cue cheesy horror music). Tickets range from $40-70 and the doors open at 6:30pm. This is not a show to be missed if you enjoy deep and explosive live-electro funk. It ought to be a doozy.

Check out our interview below with Zion Godchaux, who plays guitar and sings lead vocals for BoomBox. He gives us an in depth look into the BoomBox project from its very beginning, redefines “rock n’ roll,” credits Colorado music fans for their good taste, and explains how his furry hat and feather boa “uniform” came to be.

303: Tell me a bit about how you guys got your start in Muscle Shoals, Alabama and how it has influenced your sound.

Godchaux: My mom and my mom’s side of the family are all from this area, so I have been involved with singing and recording in studios in Muscle Shoals forever. I was born in California but then my folks ended up moving back here and I always visited them a lot from California while I was living in San Francisco. I always kind of picked up on a different thing in the air around here that made me- it’s almost like a nostalgic thing- always want to listen to blues and old recordings that peaked my interest.

It’s the geographic, energetic, maybe a frequency specific thing, that’s going on out here. That’s the reason why the music got started out here- the land, the river- it makes the musician want to slow down a bit and listen to the space between the notes, the rhythmical pocket.

I also was living in San Francisco in the early 90s and listening to a lot of house and electronic music. So when I came out to Alabama- finally moved back here- my plan was to make a record with my mom and my dad, kind of like a family album. So we did that and at that time we had got some new studio gear that we didn’t really know how to use. Enter Russ into the picture, to help us engineer that album. And while we were recording it, me and Russ ended up spending countless hours together working on this record, throwing ideas back and forth, having long talks about music. We kind of started to see that we each had something that we could turn into this BoomBox project. He is an incredible engineer and technically proficient beyond belief and his knowledge of rock and roll and soul music and the music that came out of this area is extensive.

I brought, from California, more of a reggae influence and house music and Grateful Dead influence and we just realized that with song writing and guitar and the right format, we could fuse all these styles together and make a unique sound out of it. And that’s kind of how BoomBox was born.

It took a while to figure out how we would even perform this kind of music. I bought this drum machine to perform live on, which is this crucial component to what we do because it allows us to produce tracks in the studio and then take the same machine live. We’ve got two of them so we can have all the songs on both and mix between them, like how a DJ would have two turntables. So we make our own music that we’re also mixing. So this allows us a lot of versatility to play songs live and improvise. It’s the best of both worlds and it can all be manipulated in the moment.

303: BoomBox labels their music as “rock n’ roll.” If I knew nothing at all about your sound and then heard one of your tracks, the “rock n’ roll” connotation might take me by surprise, what with your funky house overtones and electronic bouncy backbeat. Explain to me why you guys categorize yourselves as a “rock n’ roll” band versus some form of live electronica.

Godchaux: We’re influenced by so many different types and styles of music, but at the very essence of it, when you take the sound total, it’s rock and roll to us. It’s almost more of an attitude, you know. Or a state of mind.

We’re not really comparing ourselves to other stuff, you know. It’s more of an attitude. We look at our shows like rock and roll concerts. We’re just trying to get to the bottom of the soul. I think that’s ultimately what rock and roll does. The next record we put out, you might listen to that record and not be so surprised. It’s BoomBox for sure, but it’s a more completed thought. It’s all in there.

303: You’ve played every festival from Oregon Country Fair to the Hangout to Wakarusa, Electric Forest, and Camp Bisco. Which festivals do you like to play at the most and why?

Godchaux: The Hangout is fairly close to home and that’s a great festival. I think now it’s kind of changed, they’re doing a lot more big pop acts so I don’t know if we’ll get on that one again. But they really know what they’re doing and they throw a hell of a festival. We played the first Rothbury and we just played Electric Forest and that was spectacular. The weather, the layout, the professionalism, the event organizers. Each part of the country has its own vibe, ya know. And we really dig Electric Forest. We used to play this place up in Ohio called Nelson Ledges that was on this rock quarry that sprung a leak and filled up with crystal clear waters and that’s a really special place, as well. Oregon Country fair is a really special one, too. They don’t really do electronic music at that thing. But we did and it was amazing, an honor. A lot of it comes down to the event organizers. That makes a huge difference for the performers. Also weather is always a huge issue. You know, this year Wakarusa was a total mud ball.

303: You guys frequent Colorado venues, playing back-to-back nights each summer at State Bridge and now you’re returning to Red Rocks, with a stop in Aspen and Gunnison as well. What stands out to you about the Colorado music scene and what in particular do you like about playing here?

Godchaux: It seems to me that as far as our “type” of music goes, Colorado seems like they have a natural ear for what we do. I don’t know why. Why does Colorado get it? But it’s like we start to play, and they get it.

It’s like the whole rest of the country has earmuffs on. And it’s like Colorado has taken them off.

303: BoomBox’s famous covers of the Grateful Dead’s “Shakedown Street” and Bob Dylan’s “Who Killed Davey Moore?” are some of your most well loved tracks. What is it about these classic songs that you guys enjoy playing so much?

Godchaux: We love the Dead and we love Dylan and all that, but it wasn’t like a premeditated thing. It was more like I happened to be listening to a live Dylan show from 1964 and he was doing “Davey Moore.” As I was listening to it in the background and doing something else, all of a sudden I started to hear our version of “Davey Moore,” running right through his version. I heard it as clear as day and wondered if it would work. Same thing with “Shakedown Street,” which I’ve heard, like, a trillion times. But I just kind of formulated in my head. It just made sense. That’s usually how most of our stuff happens: it just formulates upstairs on its own and then we make it tangible.

303: Who are some of your main musical influences?

Godchaux: We’re huge music heads. We love all different types of music, old jazz, blues, reggae. Electronic music, house music. Pretty much all of it. And that’s why, in hindsight, maybe that’s why we’re called BoomBox. We’re putting out a sound that is kind of like a combination of all this stuff you hear coming out of a boombox. You can hear any type of music out of a boombox- which we call rock and roll.

303: Between your feather boa and furry cap and Russ’s big, bad top hat, the two of you have pretty signature styles. What type of personality are you trying to convey through your appearance to correlate with your music?

Godchaux: To me, the feathers and the hat and my personality… I wouldn’t think it would all work. But for some reason, it does. We were in New Orleans for my birthday right when we were conceiving this thing. And I was walking up the street and saw one of those fuzzy fedora hats in one of those typical cheap tourist novelty-wear stores and it was an impulse buy and boom- right onto the head it went. In my head, I heard, “If you want that job, being in BoomBox, you’re gonna have to be comfortable with wearing that.” And I told myself that it couldn’t work but it was very real- I just knew it was my new uniform for my new job. Like a postal worker. I never doubted it. I never felt weird on stage.

It’s just the uniform. It’s playful and light hearted but it’s also very deep. It’s ritualistic for me. Ceremonial. I take my feathers very serious. They may not cost a lot, but they mean a lot.

I still have the original ones and I keep all the hats, but the feathers end up getting sweaty and turn into a wet rattail. People love to take them off the stage. Those things come and go.

303: What can we expect from BoomBox in the next year?

Godchaux: Well, we’re getting out act together. We’re putting all the crucial components together. Finally. To be able to have a well oiled machine that is efficient and productive. What that means is better sounding shows, more new music, more original music. We just got up on Nugs.net so our live shows will be uploaded. So there will be a lot more live music to listen to. Hopefully we just keep getting better and better. We feel like we’re just getting started and this whole time has just been prep work. But we’re feeling more and more confident on stage. So who knows? We’re getting stronger and stronger and stronger. How that’s going to translate, I don’t know. It’s rock and roll so who knows how it’ll pan out to the listener. But as far as I’m concerned, we’re getting our act together and we hope the music just makes people feel even better than they did before.