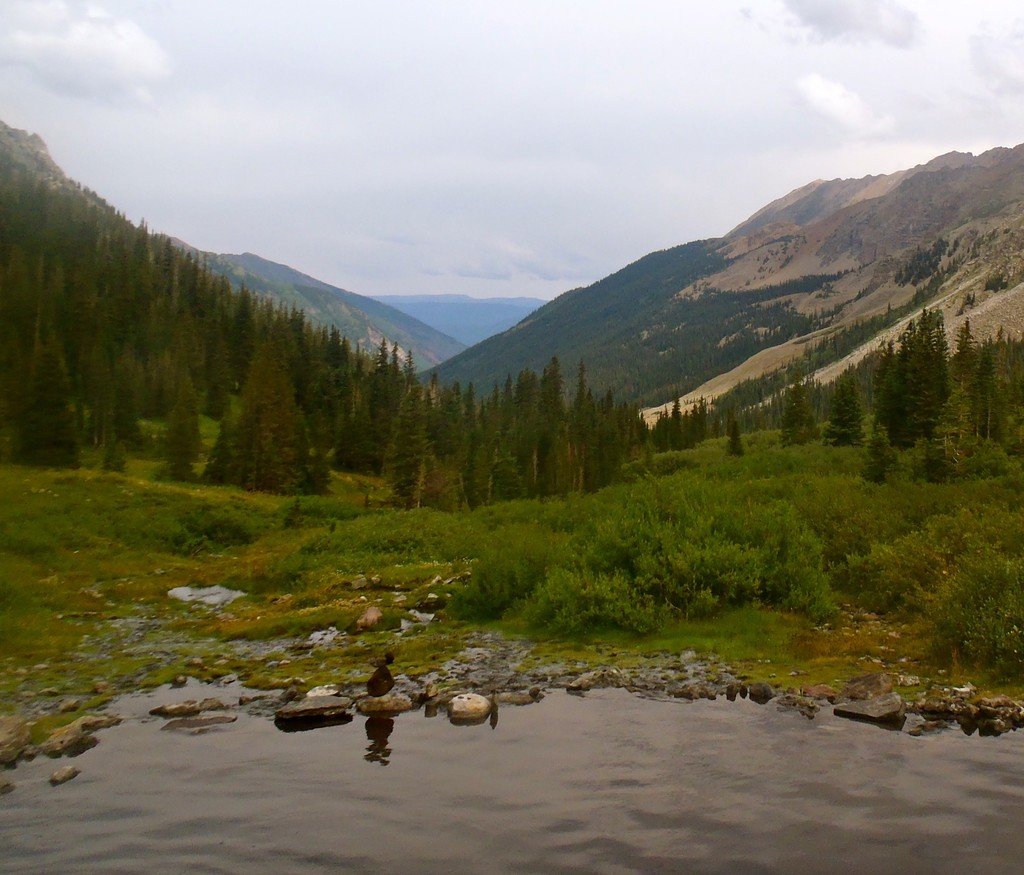 A greatly disputed Colorado factoid is that we allegedly get about three hundred days of sunshine per year. This may or may not be true, but the general consensus is that when it’s not dumping snow or being choked with wildfire smoke, the sky is- more often than not- blue.

This was not the case last week when I hiked nine miles through Aspen’s Snowmass Wilderness to Conundrum Hot Springs. It was raining steadily during all five hours that it took to hike gradually uphill, gaining about 3000 ft in elevation. Through the sloping valley I trudged with my knock-off North Face backpack that I acquired in Bangkok and had thoughtfully lined with a trash bag to prevent the precipitation from permeating it entirely. The straight forward dirt path was well traveled. It led me through Aspen groves and forests of tall pine trees where I could huddle beneath the outstretched branches in the limited dry patches to wolf down a Cliff Bar or a handful of nuts. Back and forth across the river I trekked, over solid but primitive looking bridges constructed out of thick tree trunks. Past clear, mirror-like ponds peppered with beaver dams and across craggy boulder fields. 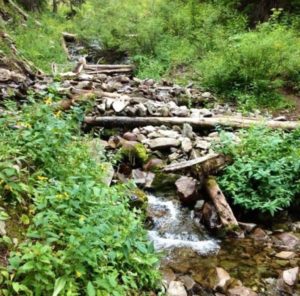 The wildflowers ran rampant, cascading down the mountain sides in brilliant purples, blues, reds, and yellows. The narrow trail began to flood and turn swampy where the puddles accumulated. My waterproof Keane boots were my saving grace while meanwhile my hands froze up, wet and useless beneath my outstretched rain jacket sleeves. Walking through stalks of tall grass and flowers as long as my entire body, whose drooping buds were so pregnant they could no longer hold themselves upright, left my exposed calves soaked and streaked with mud.

At one point the trail merges with an actual creek, which was difficult to differentiate between all of the tributaries formed by the rain, that you have to cross by means of circumventing a series of logs. By now my companions’ sneakers were totally drenched through and I watched on in horror as another pair of hikers said “screw it,” and traipsed straight through the knee-deep river. Not ready to submit to that level of discomfort, I awkwardly tiptoed and danced through the water, striving for minimal submersion.

But by the time my group had gotten just past the little ramshackle cabin where that weird frozen cow incident took place a few years back, the rain had let up significantly. There was but one mere animal skeleton resting in the moss just up the hill from the cabin, and then there were campsites. We cheered and shed our rain jackets and practically skipped up the hill the rest of the way to the hot springs. 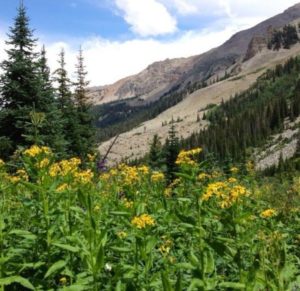 We were fortunate to acquire the last available campsite close to the actual springs, which were located just near the tree line. There are about sixteen designated campsites surrounding the springs, but some are significantly closer than others. About half of those sixteen are across a little bridge from the springs, making them about a five to ten minute walk from the pools. The rest of the sites are scattered around the hilly slopes surrounding the pools. The springs themselves consist of one main pool, large enough for about fifteen people to comfortably soak, and two smaller ones- one tiny pool just above the large one and another smaller pool below. The largest pool is by far the warmest in temperature at about 100-102 degrees.

We were greeted by local high school kids from Basalt who offered us bacon. We eagerly accepted, set up camp, stripped down to our birthday suits, and proceeded to soak in the springs for the duration of the night (campfires are not permitted at the upper camp sites, so you’re either in the hot springs or in your sleeping bags, brr!). My fingers finally thawed out and we enjoyed a pleasant mountain sunset and some freeze dried dinner while watching a herd of mountain goat traversing the ridge line. The hot springs provided an ideal setting to star gaze once the clouds had passed late into the night. 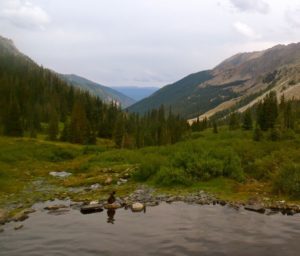 And sure enough, the next morning the sun came out just long enough to dry up the flooded trail, making the nine mile hike back extremely enjoyable. And truthfully, the hike up wasn’t even so bad- rain and all. As a Colorado local, you don’t complain about the summer rain. You know we need it. And seeing all of this rain in such a pristine and uninhabited environment actually felt good. It felt nourishing. Seeing all of the wildlife and flowers and trees thriving in the lush mountain environment was enchanting and beautiful. There is something special about walking into the woods and removing yourself completely from civilization. When you do that, you are knowingly succumbing to the elements, no matter how extreme. And hey, it could have been worse. We didn’t see any lightning, after all. And the light at the end of the tunnel was the most spectacular natural hot spring in an incredibly vast wilderness.

So after soaking for nine miles in the cool rain, we got to soak for  hours in the hot spring. Well worth it.