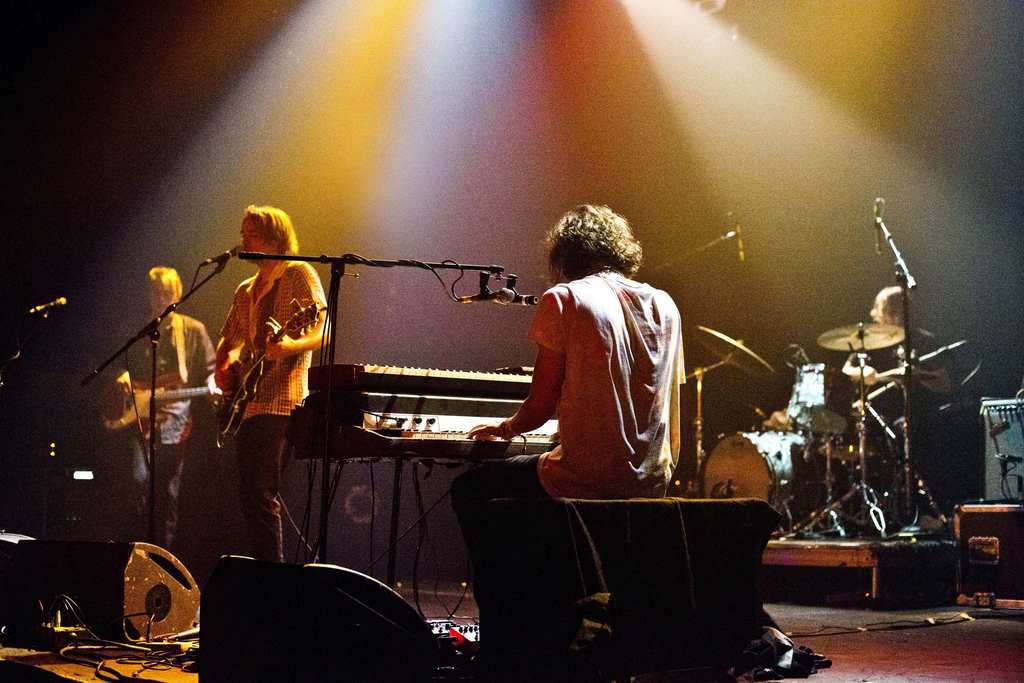 Filligar, the Chicago-based rock quartet that has been making waves this year with the release of their newest album, Hexagon, will be playing at the Larimer Lounge tonight at 9:00 p.m. Brothers Johnny, Teddy and Pete Mathias joined forces with their childhood friend, Casey Gibson, in 2000 and have been gaining momentum ever since. Their 2010 album, The Nerve, was nominated for Best Rock Album at the 2012 Independent Music Awards, and this year was named “One of Music’s Next Big Things” by SPIN Magazine. Their newest album, Hexagon, was listed as “Best New Music” by American Songwriter Magazine. As if that wasn’t enough, the band was chosen in June by the U.S. State Department to represent the United States performing in the Middle East as the “Best of the U.S. Arts Community.”

303 Magazine caught up with Casey Gibson to find out about their newest album, their trip to the Middle East, and their tour experience so far.

303: What’s the story behind the name Filligar?

Gibson: Filligar is named after a fish, officially, but we encourage using the word however you want. Google now has a second definition to the word “literally” that reads, “used to acknowledge that something is not literally true but is used for emphasis or to express strong feeling,” so I guess if you use a word enough it can take on any meaning.

303: Your newest album, Hexagon, was released last month. How is this album different from The Nerve or any of your previous albums?

Gibson: Hexagon was recorded in short spurts over the better part of two years because our tour schedule didn’t allow for an extended writing/recording period. It’s the first time we’ve done it that way, so I think this record is a little more of a wide-angle or time-lapse collection of our influences than previous, snap-shot releases.

303: What is your creative process like when creating a new album?

Gibson: Everyone has different approaches, but usually someone will bring an idea to the table and we’ll hash it out until everyone’s pleased with how it sounds. I like watching movies or TV while I’m writing–the visual stimulus can make for interesting inspiration.

303: What is your favorite city you’ve played in and which one are you most looking forward to?

Gibson: Favorite city to ever play in: Denver. Most looking forward to: Denver. Duh.

303: You’ve played in Denver before. What is your favorite thing about the Mile High City?

Gibson: We all really love Colorado and Denver in particular. Our impression of most cities are the venues we play and the hotels we sleep in, but we’ve had some time to poke around Denver and it’s spectacular. Lots of solid Instagram fodder.

Gibson: We have some of the best venues in the country in Chicago and there are some great young bands coming out of the city (Smith Westerns, Orwells, Twin Peaks, etc.). The scene is strong.

303: What is the craziest, most hilarious, or most embarrassing thing that has happened on tour?

Gibson: Every tour has its moments so it’s hard to pin it down to just one anecdote… Last night though we were in Sacramento and after the show, the inside to Taco Bell was closed but the drive-thru was open… Our van is too tall to fit in the drive-thru so one of the Taco Bell employees came outside and drove us through in his car. That was kind of a highlight.

303: Besides music, what do you like to do in your spare time?

Gibson: Spare time hasn’t really existed in a few years. I want to learn to surf this fall.

303: You were chosen to US State Department to perform in the Middle East. What was that experience like?

Gibson: It was an honor – an amazing way to see the world. We were in Azerbaijan for two weeks and met so many amazing kids over there. Can’t wait to go back.

303: What can fans expect from your show at the Larimer Lounge on the 21st?

Gibson: Johnny has been wearing some pretty amazing shirts on this tour, definitely look out for that.

Check out the video below for “Money on the Dark Horse” from Hexagon:

Filligar plays tonight at Larimer Lounge with Torches, We Are Not a Glum Lot, and Bear Anter. Tickets are $10 at the door. The show is ages 16 and up. Doors open at 8 p.m.