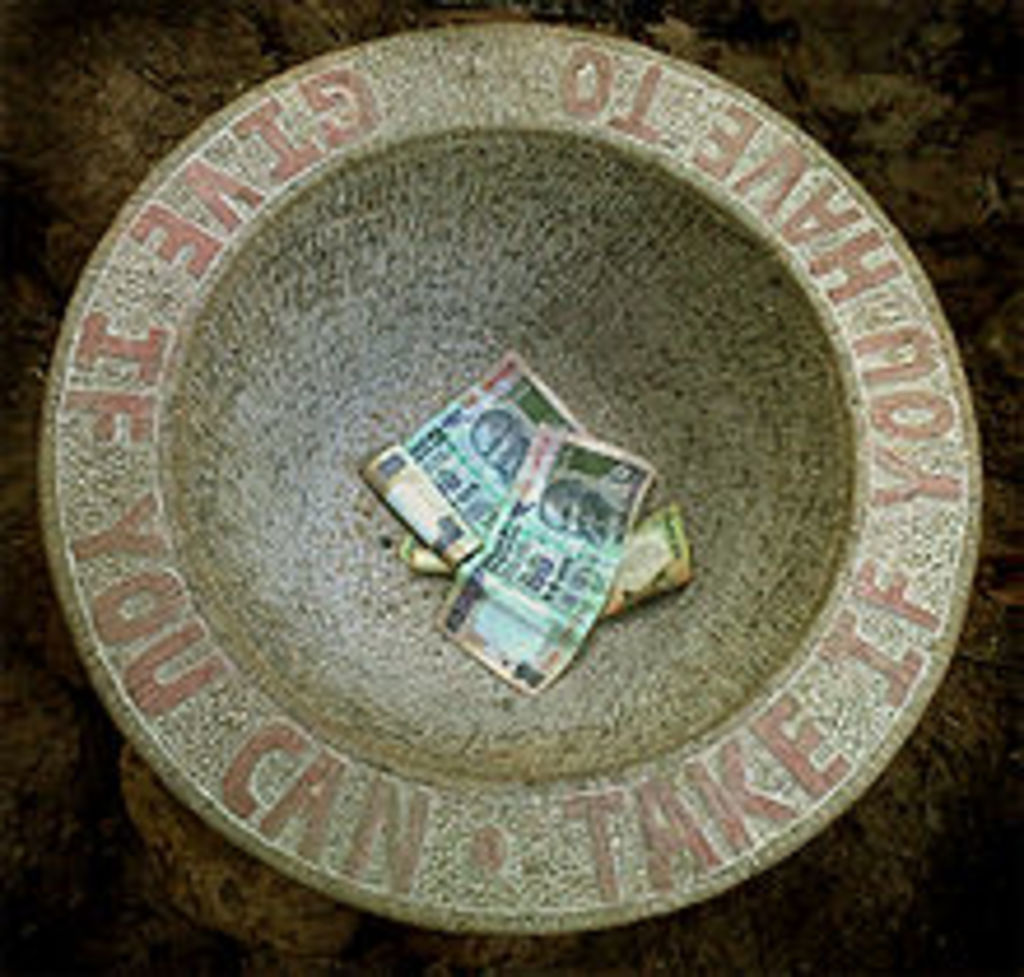 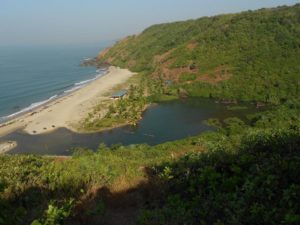 Nearby in Arambol, there is a fresh water “sweet lake.” Set amongst a small grove of palm trees on the backside of the beach, the still water mirrors the rippling ocean. The lake provides a neat cove with lounge chairs hidden under low hanging fronds in dark sand. Sad eyed feral beach dogs take refuge here in the shade and shallow water. Just beyond the lake there is a dirt path that winds through the jungle along side of the river that leads up to the lake. Along the way, you will find rogue campsites, hear echoes from distant a digeridoo, and cross paths with people covered in white mud found on the riverside rocks that is supposed to have healing properties.

If you continue along this path for about twenty minutes or so and leap across a few rocks that intercept with the dry riverbed, you will come to a gigantic banyan tree. Last year, when I had stumbled across this tree, I was quite impressed with its size and stature. Having gone to the Hawaii’s Big Island in between India trips, I was exposed to banyan trees of absolutely massive proportions. In retrospect, Arambol’s banyan is not as commendable for its girth nor its mass. But it is still a charming place, to say the least. Its branches extend out and up and then down, plunging back into the earth, as if imitating the trunk. It is the type of tree that would come alive in a Jumanji-like situation, flailing in all imaginary directions and swooping people off of the ground in a tentacle embrace.

As we approached, a booming voice commanded, “Smile! Be happy! Hakuna matada!” from within the belly of the tree. Turns out, it was a smiling African man whose exclamations proved to be contagious. 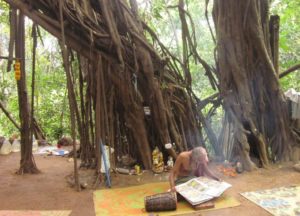 The motley crew inhabiting the cement chill out area at the base of the tree consisted of our beaming African friend, “Russian Baba” with a faded Bob Marley tattoo on his chest, a grinning young Indian man, an silent elder Indian man, another chain-smoking Russian man with a shaved head, and Yogi Baba. The African man was the welcoming committee and most vocal of the bunch. The chain-smoking Russian remained reclining during the duration of our stay, dirty feet elevated, letting loose an occasional cackle in response to the cajoling of the African man. The “Russian Baba” walked in circles and spoke rapidly and non-stop, flashing frequent gummy smiles in our direction. Only upon our departure did our American friend who speaks Russian translate the ranting of “Russian Baba,” who appeared to have been reciting scripture versus and making some sort of plight to advertise for a local guest house. His ramblings and pacing may have otherwise been unnerving had I understood what he was saying, but he seemed rather harmless anyway. The silent elder Indian man did not contribute much to any conversation but he did provide the lighter for the chillum smoking session that, I imagine, went on and on throughout the day. The younger Indian man helped as Yogi Baba ground up the gooey black charras (Indian hash), blending it with tobacco that was emptied out of a cigarette into a coconut husk. Yogi Baba then packed the chillum carefully full of the stuff, which resembled sawdust.

With assistance from the torch wielder, Yogi Baba raised the chillum to his lips and took a deep breath, inhaling the charras smoke through a cloth wrapped around the end of the chillum. He took several deep puffs, sucking in his hollowed cheeks and emitting hearty plumes of smoke. A nearby chicken sat high up on a ledge above the tree and made unimpressed clucking noises. Incense burned at the base of the tree, surrounding faded pictures of Shiva and a pyramid shaped stack of limes. Tiny birds gathered to feast on breadcrumbs close to my knee. Yogi Baba proceeded to pass the chillum off to whomever cared to have a smoke and stood up on his spindly brown legs.

He was a tiny man, by anyone’s standards. Skinny and shirtless, he reached his long bony arms up to grab hold of on of the hanging branches of the banyan. There he hung, suspended in the air, easily folding his legs into a lotus position. Dangling there like that, he appeared casual and comfortable. Over the course of the next twenty minutes that we hung out, he had transitioned into a variety of complex contortions. One minute he was a pretzel in the dirt next to the smoldering log in the central fire pit with his butt in the air and ankles behind his head and the next he was doing a perfect headstand, smiling while his prayer beads fell down from his neck onto his weathered face. The African, in his velvety Al Green voice, cheered him on and boasted about how Baba was in his sixties but would live to be one hundred, at least. Yogi Baba was nearly a spitting image of Mahatma Gandhi, who is pictured on all denominations of the Indian rupee notes. When we left and bid the tree dwellers farewell, Yogi Baba gave us a warm smile and two enthusiastic thumbs up.