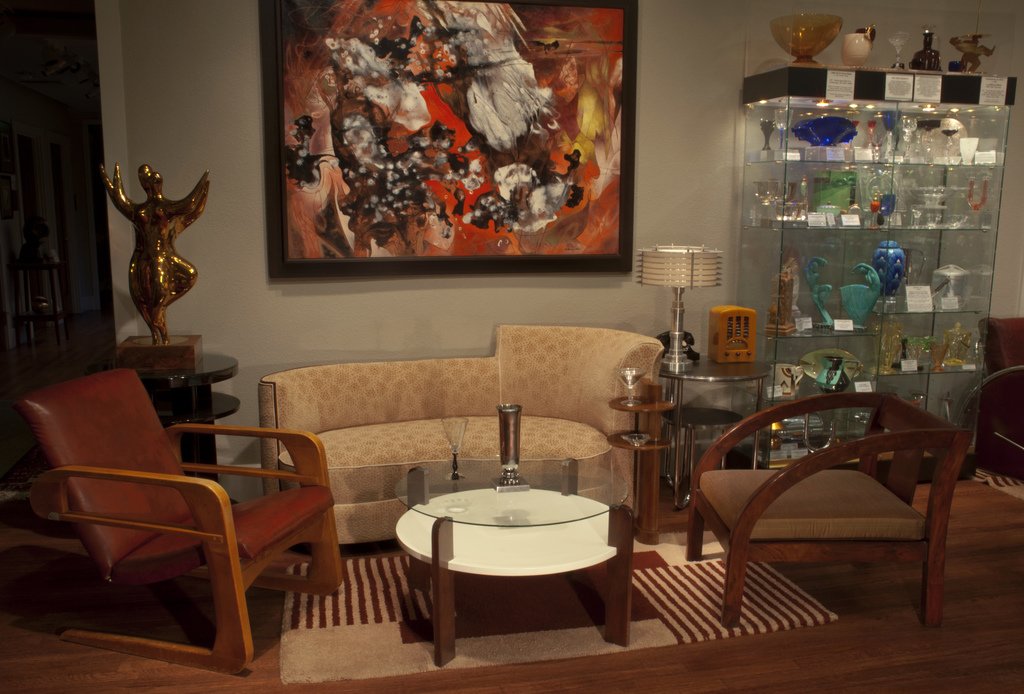 After a recent happy hour conversation in which my friend suggested that I check out some “cool furniture” down the street at Kirkland Museum of Fine & Decorative Art, I decided I would go for it, having no idea what to expect.  I traded in a few hours of my sunny Thursday morning and was more than pleasantly surprised at what I found.

I was greeted by friendly staff members and given a quick tour and overview of what was on display. The museum has three collections: a comprehensive collection of modernist decorative art, a survey of Colorado Modernism that represents more than 500 artists, and a retrospective of one of Colorado’s most important modernist painters of the 20th century, Vance Kirkland (1904-1981).  Spread over two floors, this unique collection holds more than 3,500 decorative art pieces on view as well as over 600 pieces of regional artwork. 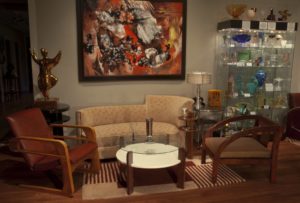 The salon-style set up of the museum successfully draws in the viewer by mixing paintings and sculptures with decorative art.  Immediately I had a sense of being inside somebody’s fancy home who collected artwork from all around the world.  Ranging from telephones and lamps from Italy to teacups from 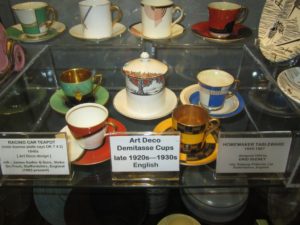 England, the museum displayed a wide range of funky, modern pieces.  This incredible collection was cleverly laid out to mimic different living rooms with couches, coffee tables, radios and typewriters.  The experience was so intimate, I envisioned myself sitting on Frank Lloyd Wright’s table (on display) discussing the paintings and sculptures of William Joseph (also on display) while eating caviar served on trays from Italy.  Sorry, caviar was not on display.

The coolest thing about the museum was that the back section was actually Vance Kirkland’s old studio.  Kirkland, who founded the School of Art at the University of Denver, used the building as an art school as well as his own art studio.  He stated, “If I’m going to eat off of something, drink out of something, or sit in something, it is going to be great design.”  It was Founding Director and Curator Hugh Grant’s brilliant idea to transform Kirkland’s estate into a museum and he continues to add and diversify the collection.  (Only 10 percent of the collection originally belonged to Kirkland)

Kirkland’s early pieces consisted mainly of watercolor paintings, but later evolved into more abstract paintings using oil and water.  In his late career, Kirkland made a series of Dot Paintings, which are exactly what they sound like (paintings made out of dots).  The first one that caught my eye was named “The Energy of Explosions 24 Billion Years B.C.”  I wondered how he could make such a large, precise painting.

The answer: skateboards and straps.  Kirkland actually laid across straps suspended from the ceiling, a little more than a foot above the painting.  He put a skateboard under the painting so he could move it back and forth.  Kirkland said that this was the closest he will ever come to being an astronaut.  Not only did he describe himself as a “drinking Buddhist” but also as a synesthetic.  This means that he actually interpreted sound as color, and would derive his color schemes from famous composers such as Mahler and Prokofiev.  Wish you got to hang out with him?  Me too.

The display downstairs was just as visually stimulating as the upstairs.  It included everything from architect Eero Saarinen’s furniture to a vintage JVC Videosphere Sputnik Space Helmet TV (just as cool and weird as it sounds).  My favorite part was the “Souper Dress,” an Andy Warhol inspired paper dress made out of Campbell Soup prints.  Worth only $1.25 back in the ‘60s, this dress was intended to be worn only once or twice before being tossed out.  (Personally, I think that all clothes should be made this way to save from the hassle and time spent on washing and drying.) 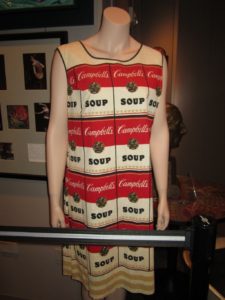 The Souper Dress, a disposable dress made of paper, inspired by Andy Warhol in the 1960s.

I was even able to catch some sun since the collection continued outside with even more sculptures.  In front of Kirkland’s mural titled “Mysteries in My Nebulous Garden” were three metal sculptures of a flute player, saxophonist and string instrumentalist by Bob Ragland.

I lost track of time as I felt like Ariel from “The Little Mermaid” swimming around her treasure cove full of gadgets and gizmos.  Whether you are an art junkie, 20th century collector, pop art admirer or just want to see some cool stuff, I highly recommend going to the Kirkland Museum.  Children under 13 are not admitted due to the fragile nature of the collection so remember to leave the young ones home.

On Saturday, Nov. 3rd, 2012, Kirkland Museum will be participating in Night at the Museums for Denver Arts Week, and admission will be free for the public from 5 to 10 p.m.  This just so happens to be the same day as Vance Kirkland’s birthday, so come help celebrate his life and artwork!