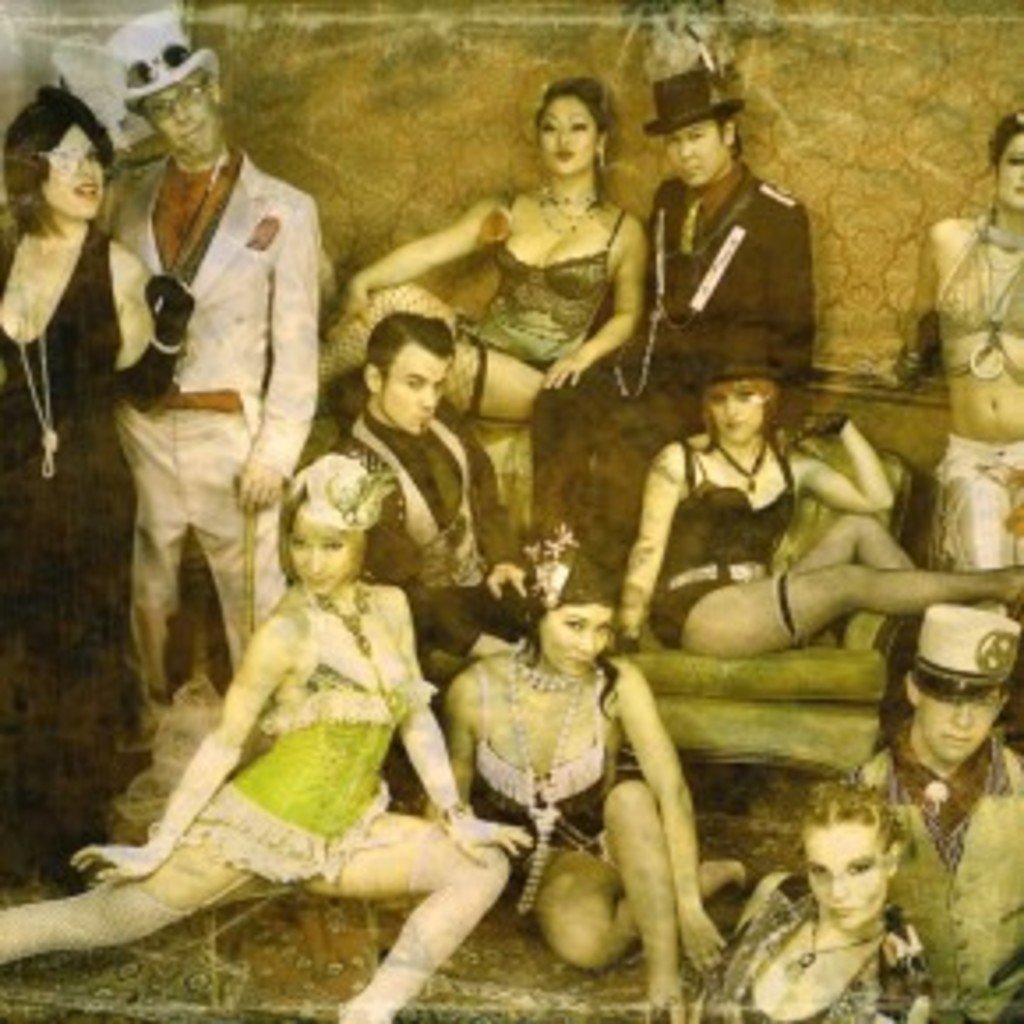 Didn’t get tickets to Burning Man this year? Don’t get your “manties” in a wad, Burning Man musical ambassadors Mutaytor are delivering a smorgasbord of Playa magic to Denver’s Bluebird Theater Saturday, April 28, with support from Fantastic Hosts DJ Mle, Satori-C and yours truly (celebrating my umpteenth Unbirthday). Now that Nevada’s Burning Man festival is becoming more and more exclusive—tickets to the annual art gathering are becoming more and more scarce after last year’s sellout (the first in its quarter century plus history)—it’s more important than ever for performance troupes conceived there to carry the torch. Fortunately, hoisting the Burning torch is all LA collective Mutaytor knows how to do. What should you expect? A “rapid fire succession of futuristic vaudevillian theatre and choreographed dance acts, coupled with breathtaking feats of aerial performance, giant screen visuals, massive pyrotechnic displays and unique reinterpretations of the circus arts against one of the most evolved progressive, electronic art rock bands on the West Coast.”

Any questions? 303 had a few for Mutaytor mouthpiece Atom Smith:

Where did you come from?

I came from the East coast. Connecticut. I was doing an industrial dance project called The Faktory in the late 90s and moved to LA to meet exactly who I met – a bunch of talented freaks who I could do cool things with.

I remember the music my parents played when I was still in the crib. CSNY, tons of folk/rock and even some humpback whale songs. LOL. My earliest memory of making music was using a wrench set I found laying around the house as a xylophone.

How’d you first get involved in Mutaytor?

I joined the project shortly after Buck (2001?), who was the original computer jockey / DJ in the band. In the very beginning, the drummers would drum against drum machines and stuff or other people’s music. But as a regular cast began to work on new material – it was decided that Mutaytor needed its own sound. I was an electronic music producer at the time and Buck pulled me in to help write that new sound. We came up with The Island Of Misfit Science (our first record) just in time for our first big rave-type festival up in San Francisco. That year at Burning man we introduced the first full set of original Mutaytor music to the Burning Man community.

Mutaytor debuted at the Burn, was it conceived or planned off-Playa?

The cast of performers were all found at Burning Man – but as I mentioned above, the first full set of original music paired with performances was created off-Playa and rehearsed for events in SF and LA during the year and hauled out to Burning Man the following year.

When did the troupe start touring?

We did a massive show at Burning Man in 2004 we called Transformation – it featured a second album’s worth of new material called Family Business. By now we had a pretty good collection of original stuff including remixed stuff from our first album and some drum pieces we’d worked out. We had a pretty solid cast of regular performers and had attracted some interest just by word of mouth. We started booking some pretty big things on our own – like some shows at Sundance in Utah through folks we met through Burning Man. But things started really cookin’ when we started being managed by a guy who also managed Mickey Hart and later the Grateful Dead. We started doing big festivals all over the country and a series of shows with Mickey Hart and a whole cast of  heavies like Mike Gordon (Phish) and world music super stars like Zakir Hussein, Baaba Maal, Angelique Kidjo, Sikiru. Things changed over night – We had folks sitting in with us like Stephen Perkins (Jane’s Addiction) Angelo Moore (Fishbone), Future Man and some of Bela Fleck’s crew – it was an amazing time!

What does the band name mean?

It embraces an approach to the creative arts, music and performance as something that’s not a set thing. Maybe not even the same thing twice – something that’s always changing. The highest form of creative satisfaction is inspiration. So we have always aimed to inspire others to do learn how to do something they have always wanted to try. master a new skill, start a new band of their own or paint, dance, create cool costumes – just bring whatever it is that they do naturally out so everyone can enjoy it. It sounds like a pretty lofty goal but I suppose we aim to be a conduit to evolution – inside and all around us. We believe that there’s nothing special about any one of us or anything that we can do – but it is special to do it together and to share it.

Paint us a picture of the green room scene.

That’s a good one! Well the green room is where all the snacks and liquor usually are and it’s where all the costumes and mirrors are so you can imagine a bunch of people drinking in various states of getting ready applying makeup, squeezing into leggings and tightening corsets – and that’s just the dudes! Lots of laughing – sometimes we have a pre-show meeting ending in group hug – urging everyone to relax and have fun – the audience won’t have fun ’til we do.

There’s been a lot of talk about that lately. What we’d like to do is get our rehearsal space at Big Art Labs in Los Angeles, legal and permitted for our big show. The show that launched us – with fire and aerial and an ever evolving cast of characters. We’d also like to act as ambassadors to artists and performers from other areas to bring the worlds together and host them on our home court. Keep the creative conversation going and give people a chance to show their thing to a new audience. This makes sense for a variety of reasons, the biggest are that we won’t have to try and figure out how to tour a huge show that takes days to set up and has a cast of over a dozen people to places often without the room or permits to do our full show. It keeps things fresh and fun for us and we don’t have to pull people away from their day jobs, money gigs, families and friends for weeks at a time. Everyone is really excited about this evolution and it feels really good to us.