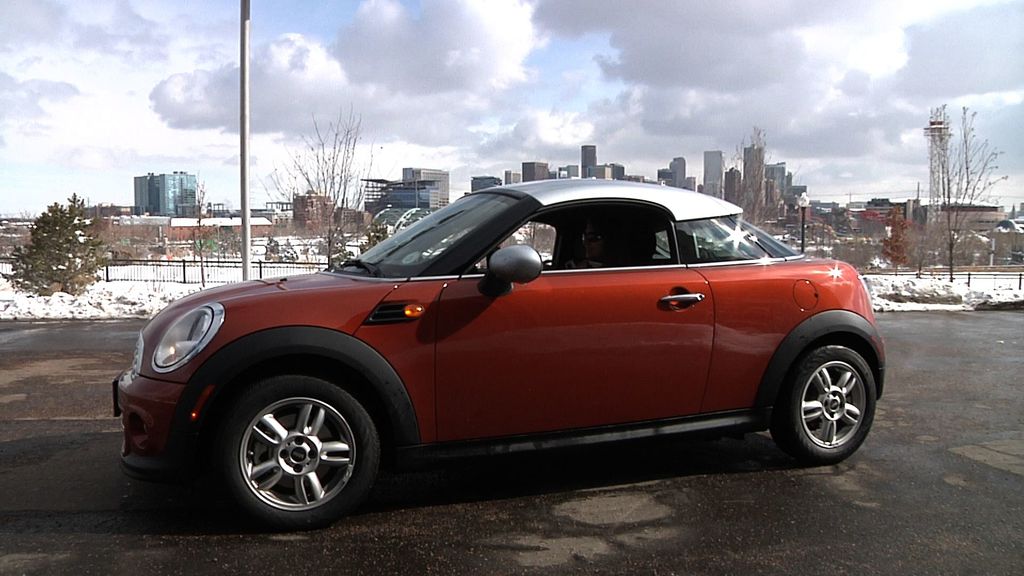 Welcome MINI Cooper’s first two-seater! Speed Racer would have loved this cute as a button Coupe. The pint-sized petunia won me over with its youthful temper and adorable look. Following MINI’s nonstop reputation for sporty handling, their new Coupe drives like a go kart with enough hi-yah to keep anyone in high spirits.

The orange, metallic automobile came into my life just before Denver’s first big snowstorm of 2012. At first I thought this was bad timing, but since the sticker touted all season tires and the cold weather package, I thought I’d challenge this whipper snapper’s handling in the snow. (Video footage coming soon.) After digging out the snow-encrusted coupe, it took a few tries to get the all season treads to drive up and over the snow onto the street. The antidote would have been full-blown studded snow tires which would have given the finger to any bump of snow in one flawless shot. However, on the road the dynamic traction control worked like a charm on easy-going city streets with no fish tails, no scary skids. The ride is nice and bumpy, driving like a go kart the entire time.

The helmet hooded hatchback leaves little room to see out of the back window. The vehicle is minimalist and there’s a certain charm to that, as if to say, I’m packing my toothbrush and heading west, see ya. The window buttons are retro and cool, but the side mirrors are one of my favorite features of the Coupe. You can park your car in one shot, then say goodnight by tucking the power folding mirrors inward, keeping even the most road-rageous city drivers from clipping your MINI’s mirrors.

The cracked out combination under the hood can be described as understated bad-assery. The new Coupe sports a 6- speed transmission powered by a 1.6L 4-cylinder engine, cranking out 121 horsepower. If that sounds puny, this is where the Coupe will chop you in the nuts. It happily hums along in 4th gear for most city driving, keeping 5th and 6th gear in reserve if you want to power chop on a racetrack or the open road. After all, MINI isn’t a three time Monte Carlo Rally winner for no reason. In the spirit of driving, MINI makes it possible to share the thrill of the open road with other MINI lovers through their motoring program. For example, this year, their organized cross-country road rally takes place July 4-15 starting in New York and ending in L.A.

Even though I didn’t take the Coupe across country, it’s such a kick to drive, that I couldn’t help but see an old school ninja movie playing in my head every time I got behind the wheel. I kept thinking of Speed Racer and ah-HA, watch me make this turn, ah-HA. I’m not sure who you’d be fighting in this ninja driving scenario, but here’s how shopping would go down in fast forward with bad oriental sound effects: Ride quickly and powerfully to the grocery story in 3rd gear then throw down an upside-down forearm block with 2nd gear into the parking lot. A call comes in. You prepare your nav system for bluetooth communication (awkwardly dubbed over foreign-movie style.) You hang up your bluetooth, locate your parking space, then reposition for a scissor punch then tire screech and back into your spot. Insert groceries into grocery bag-sized trunk then wah-push the sport button for the final chop with mega-tight responsiveness in a fatal crescent kick blow leaving tread marks behind you. Zoom in extreme close up of driver making some karate hand movement. Good fight. Bow. Insert Gong.

Weeeeee! Factor:   Four out of five Weeeeee’s on the Weeeeee scale